Very excited when I saw this (I'm a devotee of the SuperAnalogue Channel!), and positively ecstatic when I saw the price...

External PSU I can forgive, based on size, but... No USB. In fact, no digital I/O of any kind.

The Elf wrote:
External PSU I can forgive......

Looks like I'll need that Burl mothership after all :/

Way overpriced in my opinion, especially without digital I/O.

Given its capabilities, technical performance and build quality, I think the price is actually very fair and reasonable. It is a very nice mixer... but yes, it is just an analogue mixer. My eyebrows we're raised too when I realised it had no built-in interfacing. It would have made a brilliant front/back-end for a high-end DAW setup if it had a USB interface...

What were they thinking? Maybe that feature will appear in the SSL Twelve... ;-)

Actually, what they were thinking was, 'can we make a really high quality compact analogue mixer that would appeal to musicians on stage, edit suites, DJs and others for a grand?'. ... And they found they could!

I think it's fantastic for the price. You're getting some serious electronics for your money. Anyone that ever aspired to SSL SuperAnalogue and has need of an exclusively analogue mixer would be mad to pass this without serious consideration.

If this had USB I would have paid up in an instant, even if it only presented stereo to the computer. From what I'm hearing I'm not alone in my dismay.

If I'm a typical 'nearly' customer for such a device then I think SSL may regret this one...

Looking forward to the review. I await the postman patiently...

Hugh Robjohns wrote:Actually, what they were thinking was, 'can we make a really high quality compact analogue mixer that would appeal to musicians on stage, edit suites, DJs and others for a grand?'. ... And they found they could!

It's certainly not a DJ mixer, so scratch that.

Stage musicians? I doubt it. Live, you wouldn't notice any extra quality the mixer brings over a £100 mixer with built-in FX and more inputs.

Edit suites. I know almost nothing about them so can't really comment. But would have thought a more comprehensive EQ would have been useful.

Others. Yes, there will be some others who want an SSL tag on something that's relatively affordable. But without digital connectivity so it can act as an interface, how many?

[Digital] Stereo in and out for the mix bus and the monitor section would have been a nice addition, but would it really do the job as well as we'd want it to? Like most of our consoles SiX has been designed with practical options for different workflows, and while one of the reasons to ask for AD and DA is to record and monitor your main mix, I'd imagine that you'd also want the ability to print direct feeds or stems so you could multi-track.

Let's look at what you could use as a recording feed point into your DAW from a mic in to channel 1;
Out of one side of the Mix bus
Out of one side of the Mute/B bus
Out of the channel inset send
Out of ST CUE 1
Out of ST CUE 2
Unlikely to go for option 1... if you are recording a full mix but also want to record a multi-track then you'd need dedicated record feeds. If it is just 1 mic on vocals and 1 mic on a guitar and a simple setup this might be all you need.
So maybe have an extra 2 ADs built in and use the B bus as your record feed? No good if you want that channel in the main mix (if in a live performance), but very good if you want to record one part of a song excluded from the Mix bus in the studio but still monitor it (as in record a stereo out of vocals separated from the instrumental version of the mix - excellent for stem bouncing).
Or, maybe you want to work in a traditional inline style and record "to tape". Mic goes in to compressor, EQ and then sent out of the insert send into your DAW as a processed record feed, and then returned out of your DAW in to the insert return (or alternate input) and send to Mix from there.
Or maybe you just connect one (or both) of the Stereo Cue buses as record feeds to build alternate submixes or blend tracks in to stems?

Working with SiX is much like working on a much larger SSL console in terms of routing flexibility, something that Hugh touched upon in his review. We're proud of that. We also think it's useful.

So to be able to give all of these options with an inbuilt ADDA system we'd need at least 8 ADs and 2DAs (which would generate a lot of additional heat that we'd need to dissipate and the unit gets a bit toasty already with so much electronics in such a small package), as well as all of the internal tracking and switching to accomodate all of the above workflow options, plus all the switches to do it with. Then you'd need a bigger power supply, and all of that would have to fit in to a bigger chassis. Then we'd never be able to make it for the kind of cash people would want to spend on something like this...

To some extent we're taking a bit of a punt on establishing a new product level in the market. We don't think there's been a "best in class" compact mixer like this before and to understand if this feature set at this price is going to fly we focussed not on doing "everything". We wanted to make something that was everything that we did well.


Never going to get it right for everyone... but we do our best.
Comments noted.

The Elf wrote:I think it's fantastic for the price. You're getting some serious electronics for your money. Anyone that ever aspired to SSL SuperAnalogue and has need of an exclusively analogue mixer would be mad to pass this without serious consideration.

If this had USB I would have paid up in an instant, even if it only presented stereo to the computer. From what I'm hearing I'm not alone in my dismay.

If I'm a typical 'nearly' customer for such a device then I think SSL may regret this one...

The thing is... how much extra would you be prepared to pay? I mean, you use an RME system, right? How much does a stereo AD/DA of that quality cost? Ie. high enough to do justice to the analogue circuitry on offer here... You can be sure that if SSL compromised on the quality of any onboard A-D/D-A they'd be castigated for it. This way you do at least have the choice of using a cheaper external USB or Thunderbolt interface... or paying for a top-notch one.

I think the problem here Mixedup is marketing. Had SSL just released this as a compact mixer 'available to all at a ludicrous price with bells and whistles on it' we would not be having this discussion as the dynamics on offer alone warrant the price tag.

As a pod casting mixer is does fail the required specs.

Wonks wrote:It's certainly not a DJ mixer, so scratch that.

I should clarify... I didn't mean a mixer for 'scratchin with deks'. I meant a mixer for DJs to use with their Ableton systems to write/record in their home studios. Apparently SSL has several on their client list who helped specify the SiX and who are very happy customers... or so I was told! I can see a valid application there.

Stage musicians? I doubt it.

Again, one of the principle people involved in its design is a stage musician and specifically wanted the SiX to be something he could use on stage for source control and personal monitoring... There is a significant demand now for high-end, high-quality personal mixers on stage, so I can see the valid application there too.

I know almost nothing about them so can't really comment. But would have thought a more comprehensive EQ would have been useful.

Editors are not, generally, sound people and have little knowledge of or interest in EQ. It's more about source selection, level matching, and monitoring... which the SiX does very well. And an SSL on the desk looks a heck of a lot better to the clients who are paying by the minute than a Behringer!

Yes, there will be some others who want an SSL tag on something that's relatively affordable. But without digital connectivity so it can act as an interface, how many?

Good question. I have no idea and only time will tell...

As I said, it is a very nice mixer, overall, although there are a few oddities in its design -- like no polarity invert buttons on the input channels, no stereo-difference monitoring facility, nothing to warn when talkback is active, and no way of monitoring the foldback outputs... But these are pretty minor niggles that will be irrelevant or insignificant to most, and easily worked around anyway.

Personally, I think the SiX has a lot of valid applications and will appeal to a reasonable market... It is a remarkably versatile little mixer with far more capability than anything else comparable. Okay, so it's clearly not the product that a potentially bigger market sector would have liked. That much was as obvious to me the moment I saw it as to those posting here, and I'm sure obvious to those involved in its design at SSL too. But as Resonant FIlter has said, making it into an interface while retaining the core design's routing flexibility would have required a lot of extra circuitry and pushed the price way above what many would then be prepared to consider affordable.

I think it's also worth noting that this was only the second product SSL have built in the Audiotonix factory in China (the first being the Fusion stereo processor), and it's the first mixer they've done via that pathway... so it may well be that they wanted to start down that new road with something well within their comfort zone before trying to break into the very competitive and demanding high-end interface market.

Regardless of what it's not, I think there's a lot to be admired and appreciated in the SiX, and I'm sure it will find its own niche marketplace. More importantly, I think it signposts an exciting new direction for SSL.

I think it looks banging....

But would you buy one?

I want to thank Resonant Filter for chiming in. It's always good to hear from the peeps involved in design decision making.

...perhaps better known as Jim@SSL over in the "other place" in case you're wondering... 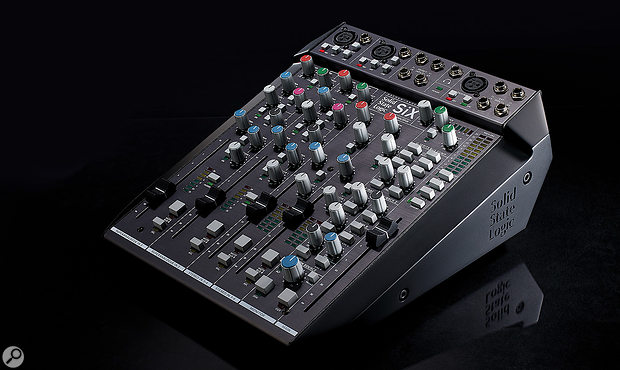 In our infinite magnanimity (and also so we can hop aboard the hype-train) we've decided to unlock the SSL review, so it's available for all to read for free.