Print view
All about the tools and techniques involved in capturing sound, in the studio or on location.
Post a reply
6 posts • Page 1 of 1

I’m a voice artist that records from home and I’ve recently been working on building a recording space that had good sound quality while eliminating external noise. Over the weekend I’ve built the following into a closet/cupboard, as follows: 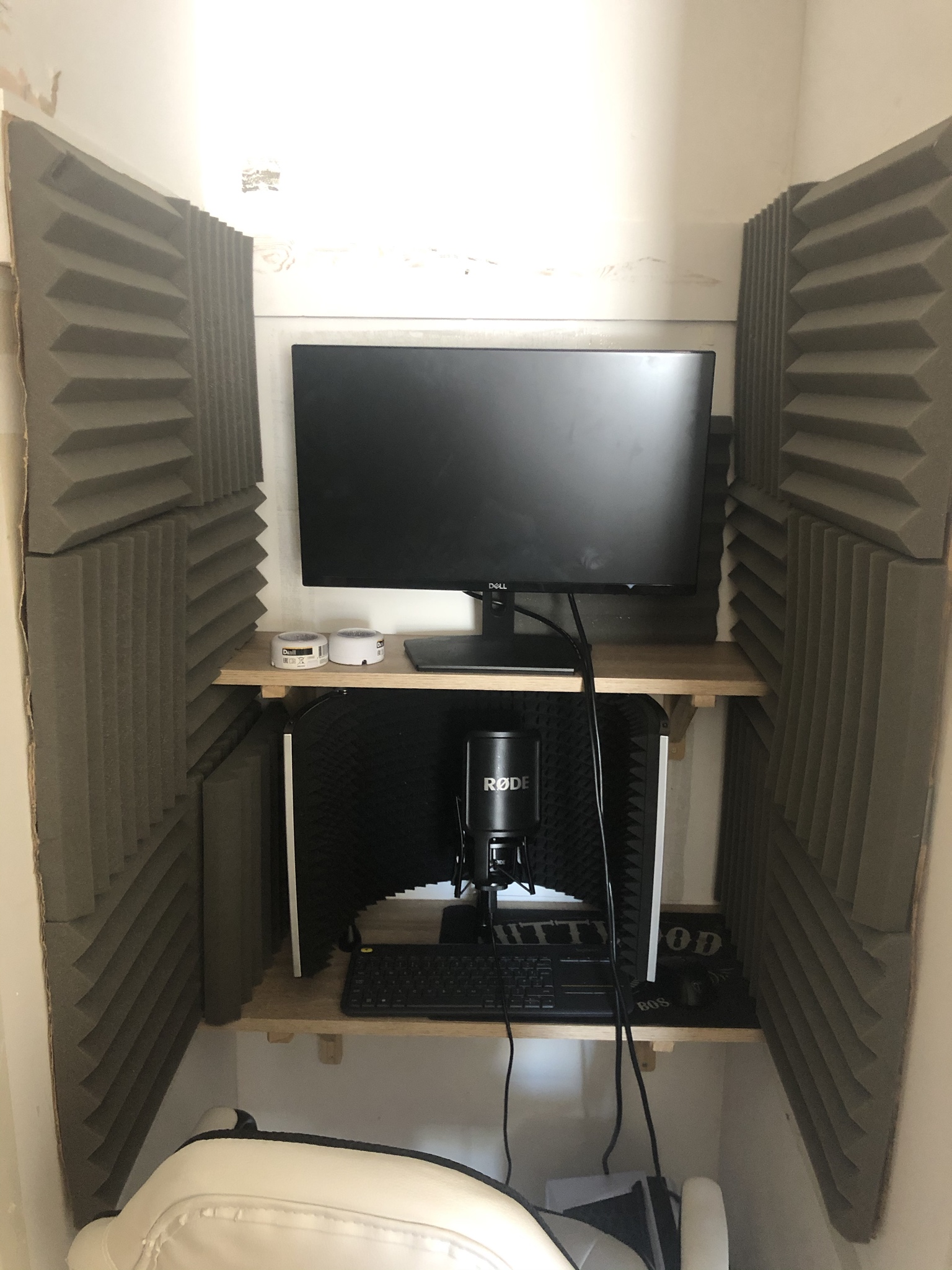 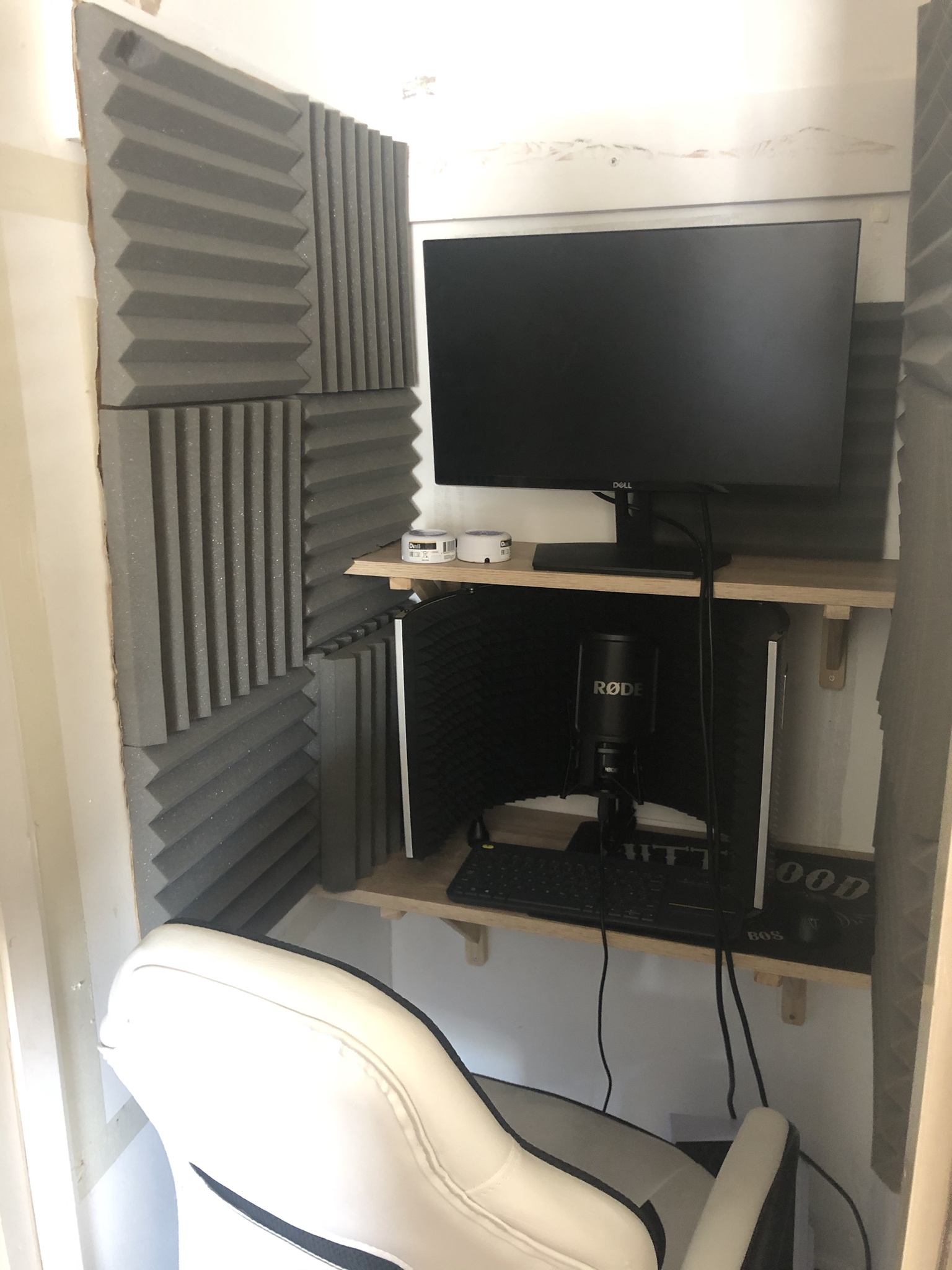 Unfortunately this has not worked out how I wanted it too as there is a very prominent echo. I know next to nothing about acoustics as I’m sure will be obvious to those of you that do. My question is simple - is there anything I can do to fix the echo in this space, or is it just too unsuitable? The walls are made of plasterboard and therefore not solid.

Thanks so much in advance,
Brad

The room is pretty unsuitable TBH but have you treated the ceiling? I'd guess that's where the worst of your echo is coming from.

The other risk is that your relatively thin foam panels are only absorbing the high mid range and up so basically taking away the 'sparkle' an leaving a 'boxy' sound.

Also, having the mic between the two shelves is definitely a bad idea.....

It can be done though, https://www.soundonsound.com/techniques/recording-voiceover-on-road

I agree with the above.

Also - a duvet hung behind your chair would help - this prevents reflections from behind reflecting into the front of the mic.

When I recorded vocals in someone's house many years ago, the only acoustic treatment I used was an acoustic panel behind the singer to prevent reflections into the mic. and it worked very well.

I would have said that normally voice work is done standing up with a mic. on a stand to avoid some of the nasty reflections that you will be getting from those shelves - especially as your reflection filter is fully open top and bottom.

Personally I am not that fond of reflection filters, but the Aston Halo seems to be the one that always comes out on top as it also helps to protect from reflections from above and below, which others don't do.

Most of my work is solo voice work...

As Sam says, getting this space to work acoustically is going to need a lot more done on the acoustics.

Foam is of very little use for effective broadband treatment - fibre(fiber)glass panels - ideally spaced slightly off the wall - will be more effective. It should run floor to ceiling too.

You have a nasty void under the lower shelf. That needs to be acoustically treated on all three walls - top to bottom.

You need acoustic treatment on the wall that faces you - floor to ceiling.

You'll be getting some lovely reflections from that monitor screen. When recording I cover my (turned-off) monitor and the desk with a cot duvet. I use a printed script on a small, angled desk stand. Of course that means I have to adjust page-breaks and either be careful turning pages or budget for page-turn-pauses (my preference) which I edit out afterwards.

Your mic is too far 'inside' the acoustic shield/reflection filter. The middle of the mic should be aligned with the edges of the shield/filter. That said, personally I'd discard it and put more treatment in.

A thick duvet behind you should help hugely.

John W's comments about standing-up... While that's frequently used by voice actors in films, it is by no means usual in my experience for those recording for radio, audio-books etc. There is a benefit in that the diaphragm is less constrained, but it's of no real concern unless you're doing really dramatic stuff. For normal narration being seated is fine.

You probably can make that space work, but you need to reconfigure your shelves and get more treatment in there. :)

Nazaradine wrote:Unfortunately this has not worked out how I wanted it too as there is a very prominent echo.

Terminology is important here, as one person's 'echo' is another's 'slapback', or another's 'reverberation'... and these all require different fixes.

However, looking at your pictures several possibilities spring to mind.

First, we can't see from your pictures what is behind you when seated... but that surface or environment is the one that the microphone is actually pointing straight at and is most sensitive to. If a hard wall or large open room (with hard surfaces), that could well be the source of your 'echo'.

The simplest and quickest solution would be to hang a large absorber directly behind your chair, extending around the sides when you're recording. A thick double duvet is cheap and easy to rig, but heavy blankets or drapes would do just as well. Think of it as a 'reflexion filter' for you instead of the mic!

Next, the pictures suggest a high and untreated ceiling. You're definitely going to get strong reflections from that, so again, an absorber hung overhead would improve matters dramatically. Foam panels or another duvet suspended on strings pinned into the side walls for example.

I suspect those treatments would cure your 'echo' problem... but the rest of the setup suggests to me that it will result in quite a coloured sound for several reasons.

Others have already pointed out the issues with the mic between hard shelves, and the mic being too far into the curve of the filter. The screen will also generate strong reflections (although those will hopefully be taken care of with the new absorber behind you). And the foam on the side panels will only treat upper-mid and high frequencies, leaving all the lower-mid and low frequencies to rattle around uncontrolled, which will tend to make the space sound boxy on the recordings.

So, if possible, I'd suggest placing the screen down on the lower shelf and removing the upper shelf completely. Get more foam panels -- thicker 2-inch ones if possible -- and line the side and back walls with them around and above the mic. Ideally, I'd place another one across the top of the screen below the mic to kill any reflections coming off the screen/lower shelf.

Suspend the mic from a boom arm stand, or a stand fitted to the wall (or shelf). With decent thick foam on the walls you can ditch the reflexion screen, which will make mounting the mic a lot easier. The mic should end up with the capsule roughly at forehead height, tilted down towards your mouth.

Hi there, um do you have to do this in a cupboard? Thing is they tend to sound really...well like you're in a cupbaord

If it was me, i'd be setting up in the largest space possible with the mic on a stand and chair as far away from walls as I could get...with my back to some closed curtains...
I'd have a pop shield and be right up close to the mic so I could have the gain as low as possible to reduce the external spill

then go from there