Print view
All about the tools and techniques involved in capturing sound, in the studio or on location.
Post a reply
42 posts • Page 2 of 3 • 1, 2, 3

I've never actually "jacked up" the mic gain too much while learning how everything works, but in my recent recordings I have been using the 48V "phantom power" feature on the interface. I was just experimenting with it one day and found that the 48V made the monitor quality a lot easier for me to hear. The mic I'm using is Aston Stealth... so I'm not even sure if I need to use the phantom power feature in the first place! Could this be part of the problem?

I recently bought the same mic’. If you use it without 48volts phantom power then it is a standard Dynamic microphone. That means it isn’t very sensitive and needs a powerful preamplifier (built in to your interface). This might explain the hiss you mentioned. You need to be very close to it when singing into a Dynamic mic’, a matter of a few inches to about six inches. The further away you are the less bass you will get (bass proximity) and it will sound very ‘thin’.
When phantom power is switched on a purple led ring lights up on the mic’ and a booster circuit of 40dB is engaged within the mic’, turn down the gain on your interface before doing this then set the gain to a new lower optimal level. This will reduce any hiss too.
Make sure you experiment with the different voice settings to match your voice, guitar etc.

anna-marie music wrote:Thank you so much for the help!!! When I first started recording, I was using a pair of Headrush Bluetooth headphones (that also had an audio cable). The quality of them when plugged into the Focusrite was really good, until they broke a few weeks ago (so I had to get some new headphones, and based on my experiences trying out headphones in the stores I decided on Bose). So I have never used an expensive pair of recording headphones... I was thinking about getting a pair eventually, but your response gave me peace of mind that the headphones I currently have will work :)

Yes, so long they don't leak too much into the microphone, use what you have.

Among many, an example of common "recording" headphones are the AKG M50x: not too expensive as headphones go - especially because you find them second hand :) - and good isolation. I have a couple dedicated to that.

But no point in spending money now!

anna-marie music wrote:I started using Ableton Live 10 about 7 months ago, and I'm still not totally sure how to find the dBFS on the DAW meters. I can tell that the meters are present, but are there supposed to be numbers along with them so I can tell what the levels are? Or am I just supposed to guess?

I am not familiar with Ableton alas, but yes, there should definitely be numbers near the meters :) If there aren't, it could be that the meters are in a "narrow form" (often DAW programmers do these things to allow the user to fit more stuff in the screen space). I see for example in the picture below that only the third meter from the left and the last ones are large enough to show the values.. it's probably a graphical interface thing. 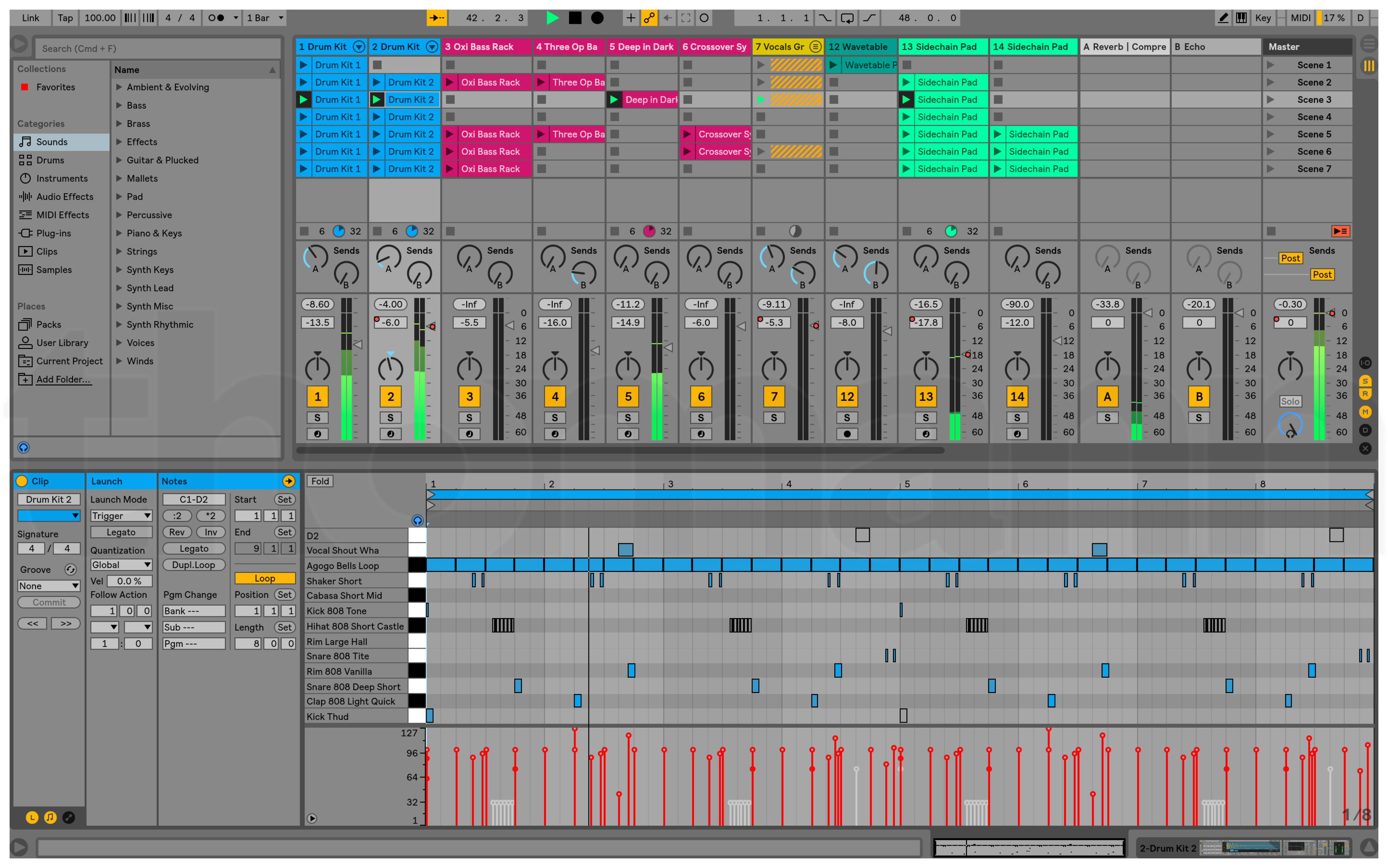 In any case, even if you do not see the numbers, a rule or thumb is that your levels (the green bar) should be around the middle of the column, and never ever go in the yellow and red, at last when recording a single vocal or a single guitar. If you're using one microphone to record both, you can be marginally hotter - but still no yellow or red.

Something important to understand is that a signal at that (correct) level will sound very very low... if you have set the monitoring level (on speakers or headphones) so that your fave song or YouTube video plays nice.

That's because when you record you are leaving a lot of "volume" available for later processing (mixing).. a finished mix itself is usually much lower volume than a finished release, and the final volume is set only at the final step, called "mastering".

So basically when you record, you should set the playback volume so that - if you play a Spotfy song or a YT video, the volume is deafening! :D

I've never actually "jacked up" the mic gain too much while learning how everything works, but in my recent recordings I have been using the 48V "phantom power" feature on the interface. I was just experimenting with it one day and found that the 48V made the monitor quality a lot easier for me to hear. The mic I'm using is Aston Stealth... so I'm not even sure if I need to use the phantom power feature in the first place! Could this be part of the problem?

Cool. Phantom power is simply a name for using the same cable that sends the audio signal to send electricity to the microphone.

Not all mics are made equal: some need electricity, some don't, and some (like the stealth) can actually work with or without phatom power - but when it has power it activates and internal preamplifier that gives a more boosted signal. You therefore need less gain from then interface which makes for less noise.

Or you could have fallen in the trap above - having set your volume using mastered material (songs or YT videos etc), your recording sounded too low and you might have increased the gain to make it more intelligible.. only in reality you've just made it much more noisy.

In that case, the trick - as of the blog post - is to increase the playback/monitoring volume, not the the recording gain.

Slightly off topic but what are people's thoughts on headphone hygiene? Anyone using disposable covers?

I get caught now and again with ear infections. I just got out my DT100s with my home-made leather ear pads after they had been packed for a while and forgot to give them a clean.

Calling the quack in the morning. :frown:

Any thoughts on headphone hygiene ?

I had problems with ear infection when I was regularly using ear buds and, later, custom moulds but never had anything related to using 'on ear' or 'over ear' headphones.

If they start moving, shoot them!

I'm doing research about the best headphones for tracking/recording... what do you all think about the Audio Technica M50x headphones?

I've always had a passion for music. Influenced by the likes of Michelle Branch, Kelly Clarkson, and Mandy Moore; my music style is alternative pop based with a little hint of country.
Top

I haven't used them but if you are in Europe and buy mail order you have 28 days to return them if you don't like them. For similar money you can buy Sennheiser HD25s which are pretty well regarded tracking headphones.

Never tried them either, I love the Beyerdynamic DT100s as do a lot of other people, but that's probably an old habit. I often hear there's better around as Sam has suggested for instance but I just like them.

DT100s get the job done but I doubt anybody would claim they sound great, they ain;t cheap either. HD25s actually sound pretty decent as well as having 'best in class' isolation and being passably comfortable (they are an on ear design and some find them a bit tight). DT100s are the SM58 if the headphone world :D

Sam Spoons wrote:I haven't used them but if you are in Europe and buy mail order you have 28 days to return them if you don't like them. For similar money you can buy Sennheiser HD25s which are pretty well regarded tracking headphones.

Thank you so much for the recommendation! I'm reading reviews for the HD25s right now and they seem really good! I found two different models on my local music retailer's website... which one would you suggest? I don't really see any major differences between them so it would be interesting to hear your opinions!

I've always had a passion for music. Influenced by the likes of Michelle Branch, Kelly Clarkson, and Mandy Moore; my music style is alternative pop based with a little hint of country.
Top

I have a pair of the AT M50x (in the limited edition red colour) and all year I have been using them exclusively for my music listening (coupled with my Audient iD14 AI). I do have a pair of DT770 pro here as well, but haven't plugged them in all year so can't make an honest comparison.

They are not hyped, and sound good with all genres of music. Good isolation, and very comfortable to wear even when listening for several hours.

Of course, everyone has their preference, but they are more than good enough to do good work with.

Avoid the HD25 Light as it appears to be the same as the SP25-S and has downgraded capsules, all the other versions are basically the same with various cable and impedance options. The pukka versions all seem to have a split headband and single (not Y split) cable. Lots of threads on hear about them. I have HD25 2s and for checking mixes/listening AKG K702s which are open back so not good for tracking. Both were bought after much reading of these forums :D .

Sam Spoons wrote:DT100s get the job done but I doubt anybody would claim they sound great

No they sound horrible. I've got some B&Ws and they sound amazing! But the DT100s are a cosy place to work and I've had these ones for over 25 years, they get chucked around and are good as new. I doubt the B&Ws with their clever circuitry and space shuttle materials would survive a good weekend.

No they sound horrible

Agreed, the DT150 and DT250 are similarly robust and parts are replaceable but they sound much better for similar money.