Looking for opinions as I can't audition these
I want to upgrade my PMC tb2 (passive consumer model) currently running of some home made class d amps. (I used to run them off an old Bryston 2B which sounds marginally better I admit). I also have a dynaudio bm9s sub proving a little low end (can't help myself), which I may also look to sell though not replace, hoping new monitors would provide enough low end.

I would like to get an active pair of monitors.
The monitors are placed quite near the back and side walls (sit in the room 20-30cm or so) and I have quite a few bass traps and acoustic panels behind and around the room to even the room out
The room is about 2.1m wide, 4.7m long with a high pitched ceiling (3.5m or so to apex) with half loft space

I had been lusting after PMC result 6 but these are a bit of a push budget wise...
And then I read the glowing review of the APS klasik 2020 which would be less than half the price of the PMC's here in NZ
On paper these both look very similar
I have noted the back port of the APS klasik's but apparently these are okay to position close to wall (almost closed box design)

Would the APS klasik 2020 be a worthwhile upgrade?
Or is it worth saving for PMC Result6?
How much of a difference would there be between the 2?

All my music is hardware based synths and drum machines, so some low end extension is nice, though I am aware of limitation of room size.

Thanks all in advance

Thanks Richard, much appreciated

I think that sort of answers part of the question...

The other is whether the APS Klasiks 2020 would in themselves be much of an upgrade over my existing setup?

"In space no-one can hear you scream".
Top

I think that sort of answers part of the question...

The other is whether the APS Klasiks 2020 would in themselves be much of an upgrade over my existing setup?

Welcome to my world!
By the way Walter, if you are into DIY amplifiers get Duggy Self's book on power amps. There you will find designs that get close to the limits of the best test gear money can buy.
Interestingly he favours "Class B* over the AB often touted as superior (class A is still even lower for crossover distortion but really impractical for much over 20W)

Class D is now very good at its best but requires very expert design and one wonders if the efficiency gain is really that important for high end audio? Most of the waste heat in linear amplifiers is lost in the mains transformer. You have to couple class D with an SMPSU to make any sense.

*Iq is still around 150mA mind for EF output stages. CFPs are much more efficient.

I built my amps as a little project few years ago using the Anaview ALC0100-2300 boards (from memory).

Funny thing was I had mean't to order the AMS model (that I understand Amphion use or used to use in their power amps) and realized half way through the build I had actually ordered the wrong one. :headbang: Apparently there is very little in it though, and to my ears they were actually pretty impressive.

I have an old Bryston 2b and the class d Anaview compared quite well... the Brystons did seem a little more "spacious" and "open" if I am being picky.

I did note in APS Klasik 2020 introduction / Q&A video, some comment about the their choice of Class A/B over class D amp's was along the line of "they just sound better"...

I'm tempted to get the APS Klasiks 2020 ... At least then I would have been able to hear for them myself. I think they are so reasonably priced that I could always sell them on here without much loss if they don't workout for me for whatever reason (there are no dealers in NZ so I would be looking to import from funky junk / Proaudio europe).

The PMC Result6 would still an option in future if I still feel the desire, and at least I would have had chance to check out the APS in meantime

Aww shucks! If you got the 2020s and wanted to sell them I would offer you a good deal but shipping costs (and risks!) would kill the deal.

If you have not read Self's book I urge you to leave little reminders about the place for Christmas! He touches on class D but concludes the performance cannot approach linear designs and are thus really limited to specialist applications such as phones.
Yes, the book is ten years old and D's have come on a pace but Self wonders why class G has not had more use? Efficiency is very high and distortion can be almost as good as simple class B. He gives a design with a class A 20W stage and a class G 'top up'' that has truly impeccable performance figures.

I have orderd the APS Klasik 2020, should see them before xmas.
Really looking forward to hearing them, all reviews I have read to date are positive and It will be good to compare against my current TB2 passive speakers that would be almost 20 years old tech now.

ef37a wrote:Yes, the book is ten years old and D's have come on a pace but Self wonders why class G has not had more use?

For anyone reading this who doesn't know (or, like me, had forgotten!) what Class-G amplification is, Hugh explained it very elegantly in his review of the PSI AxM series monitors:

Most readers will be broadly familiar with the concept of amplifier classes such as Class A, B, AB and D. Put very simply, a Class‑A amplifier employs an output device (a valve or transistor) which conducts linearly on both the positive and negative halves of the audio signal. This approach has very low distortion, but is pretty inefficient and results in a lot of energy being wasted as heat. The Class‑B topology improves the efficiency significantly, by using separate output devices to handle the positive and negative halves of the audio signal, but with the drawback that the transition from one side to the other results in 'crossover distortion'. Class AB is a blend of these two ideas, biasing the output devices in such a way as to combine much of the Class‑B efficiency while retaining the Class‑A linearity, and this has been the dominant high‑quality amplifier topology for decades.

In recent years, however, Class‑D amplifiers have become more popular, mainly because they offer very substantial efficiency gains compared to Class‑AB designs. Instead of employing output devices to vary the output current linearly, Class‑D amplifiers work by switching the output devices either fully on or off at an ultrasonic frequency, the on and off durations (or 'pulse width') being modulated by the audio signal. An output filter averages the resulting current pulses to reconstruct the audio signal and remove the ultrasonic switching artifacts. The idea is closely related to the sampling process in a digital converter, although there is no quantising stage involved, and it remains a completely analogue system.

PSI's approach in its range of active monitor speakers uses a less familiar amplifier topology called Class G. This maintains the inherent linearity of the Class‑AB approach while improving significantly on its efficiency. At its heart, the design employs a low‑power Class‑AB amplifier, operating on relatively low power‑rail voltages, which does most of the work. However, the output‑stage circuitry is supplemented with additional output devices connected to much higher‑voltage power rails. Most of the time, only the low‑power amplifier operates, and the additional output devices are turned off — thus improving efficiency. But when the required output signal amplitude exceeds the voltage range of the low‑power stage, these additional high‑voltage output devices are switched on to facilitate the required higher‑voltage signal peaks.

Controlling the switching of the high‑voltage output devices is critical to avoid another form of 'crossover distortion', but when optimised this approach works extremely well, running virtually as cool as a Class‑D design, but with the established audio quality and freedom from electromagnetic interference radiation artifacts of a traditional Class‑AB amp. The output‑stage biasing and switching is usually achieved with a number of diodes — far more than you would expect to find in a normal Class‑AB amplifier — and these can be seen in the output stages of the amplifier chassis in the PSI monitors. 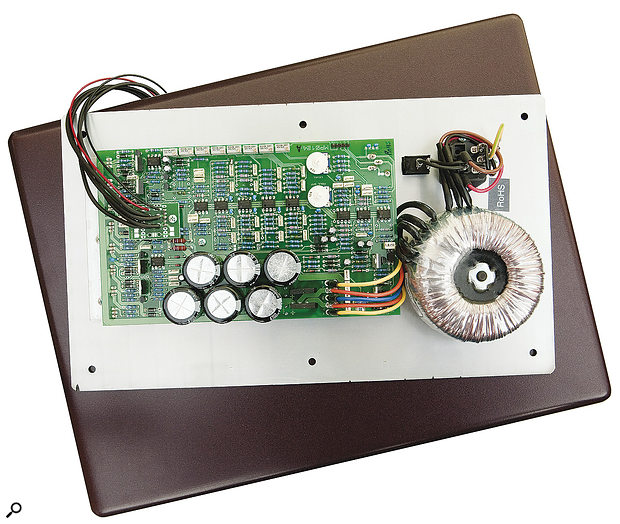 I am obliged Chris.

Yes, class G has several advantages over the other "classes". The main drawback was the forward voltage drop in the "commutating" diodes that performed the switching from lower to higher voltage supplies but Schottky diodes became available with very high current ratings, low voltage drop and very fast operation. But it seemed the world found class D 'sexier' despite being a much more difficult technology to get up to the performance of even a fairly pedestrian conventional amplifier.

Interestingly, Self eschews the "AB" concept. The simplistic idea that increasing the bias so that the amplifier is working in class A for medium power duties seems an obvious one but he found that at some point "AB" amplifiers enter a state he dubs "gm doubling" and distortion is actually worse at certain points through the power range than class B*.

But! The concept that "Class B" is only the preserve of low current drain "Fair ground" amplifiers persists and so ALL amplifiers that are not "D" or "G" will be called AB!

*He defines "B" as an optimum bias point that gives the lowest crossover distortion but this is SO low in his designs that you have to take steps to temporarily make it worse and measure at 5kHz , not 1kHz in order to see it even on the best AP kit!

For an emitter follower output stage 1q is still some 150mA so a 50W amp is still going to run quite warm! The Complimentary Feedback Pair is much more efficient needed only about a tenth that Iq but can be a little more trick to keep temperature stable.

... I may have spoken too quickly
Shipping cost looks to have more than tripled and awaiting new stock. Not looking like such a bargain once duty is applied....

....But in the meantime getting quite an education about amplification