Condenser microphone working badly in mixer, doesn't work at all with phantom power.

Condenser microphone working badly in mixer, doesn't work at all with phantom power.

I bought a condenser mic like 8 months ago, it's a very cheap and probably that is a factor of my problem but it should work fine and it doesnt (it is the "time tmmic 9801", i think its a local brand from here).
It had a xlr cable that ended in a 3.5mm plug and an usb. With that the mic works pretty good but i wanted to have less noise and also have all my things connected to my mixer (Parquer KT-P4).
So after i bought the mic i bought a normal xlr-xlr cable to connect it to my mixer and it didn't work at all at first, then with time i found out it works but it's very very quiet so only when i turn the gain and volume almost all the way up (if i turn the gain too high it clips) i can hear it, not only that but after a few seconds i can't hear the mic anymore, its very weird.
When i turn on the phantom power of my mixer it just doesn't work at all, its not even quiet, its muted.
I just wanted to know if the problem could be the mixer (which could be, because i noticed other issues like when i turn the panning from one channel all the way to the right it mutes, but when i connect it to an amp or something it works fine, but that may be problem of the recording method and not the mixer), the microphone itself that as i said it already came with a special cable and works fine with that, or maybe the xlr cable i bought.
I will try to use other mics and cables on the same mixer but currently i can't so i just wanted to know which could be the problem here and maybe how to fix it.
If it's helpful my guitar works fine there, and i tried every button basically and still doesn't work. Also when the mic is connected without phantom power and i touch it it makes an electric noise, but with the phantom power it doesnt, so i guess maybe the phantom power of the mixer could be broken and not sending energy?

The mic with the cable i said 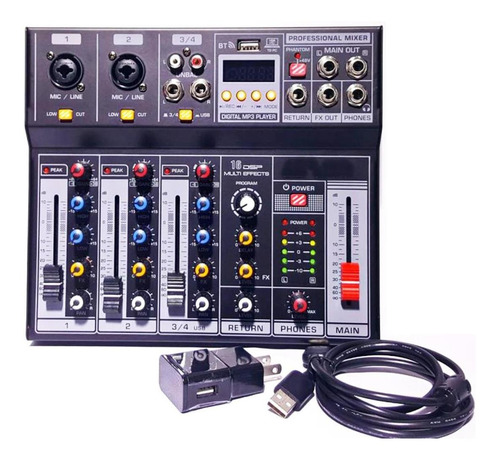 I suspect the fundamental problem here is that your microphone is not designed to connect with a conventional balanced mic preamp in a mixer. Instead it is designed to connect directly to a laptop via either unbalanced 3.5mm with plug-in power (which is 5V or less) or via USB (which also provides 5V).

So although it uses an XLR for the output connection, the signals presented on the XLR pins are USB digital data and an unbalanced 3.5mm mic output expecting Plug-in Power from a computer sound card.

Neither of these things are compatible with a balanced mic preamp or 48V phantom power.

And the reason the sound dies with phantom power is almost certainly because the output circuitry can't cope with its high voltage and is basically shutting down.

You need a conventional microphone specifically intended for connection to balanced mix inputs to use with your mixer and, if that's a capacitor mic, compatible with 48V phantom power.

Thanks for the information!
I tried to connect the 3.5mm to the 3/4 unbalanced input and it works fine, so i think i will stick with that until i get a new mic or something. I really just wanted to connect the mic to the mixer so this works for me since now i can eq and add some effects directly to the input.

Technical Editor, Sound On Sound
In my world, things get less strange when I read the manual...
Top
Post a reply
4 posts • Page 1 of 1