Hey guys how ya all doing, Need help

Just got my hands on a "Samson Servo 300", its sounds fine happy enough with the quality. But the fan or dual fans are making a bit too much noise. Can these be changed to quiter fans or is there an alternative.

If so what make\model should I buy..easy to fit or need pro?

Not much to go on. Measure them and find out the voltage, then someone might have an idea.

Yea, sorry, I will research further and try and find out.

Looking at the schematics, the fans are 24dc 2 pin connector types. You'd have to open up the case and measure the fan size. But I can't see anything on the actual airflow rate the fans provide, so just getting a similar size fan may not do the job, or reduce the noise. Fan noise should be minimal unless they are putting out a lot of power or there is a high ambient temperature. The fans are variable speed (not sure if they are two-speed or continuously variable), so the hotter the amp gets inside, the faster they will run.

If this is a used amp, the first thing to do would be to open up the case and check for dust and dirt build up and give it a good brush and vacuum to clean it out. That may allow the fans to then run at a lower speed and make less noise.

I'd have a look at the fans and see if there is any labelling on them that might give a clue as to their current rating or flow rate.

But i have no idea how you'd tell if a replacement fan would be noisier or quieter. A lot will be down to the number and design of the fan blades. A larger fan running at a slower speed will normally be quieter than a smaller fan running at a higher speed, but you'll be limited by the fixing arrangements and airflow path as to the size of fan you can fit.

This is a power amp after all, and one of this size and amp configuration (class AB) isn't the best choice if you want silent operation. As part of a PA or an installed system you wouldn't expect to worry about fan noise as it would either be masked by the PA or tucked away in a cabinet.

If you wanted a noiseless amp of this power rating for use to drive passive monitors in a home studio, then there are certainly passively cooled class AB amps (or more efficient class D amps) available.

The bearings on the fans do become noisy over time and the fans may be full of dust. If you check the fan part number and it is a part from a quality manufacturer you will be able to download spec for airflow ratings and noise ratings. Good quality fans have better bearings and produce less noise.
As you are only going to use the amp for studio use rather than stage/performance use you may find it doesn’t get too hot without the fans disconnected ( but be careful and monitor the heat on the output transistors ). If the manufacturer has fans in the amp they can use smaller heat sinks so another option is to buy additional heat sinks and bolt them to the side of the amp - dodgy but potentially worth a shot especially if you also buy less noisy lower flow fans.

Vacuum yes. Brush NO. On an old bit of kit that would be likely to break bits that have become brittle with age and heat.

Folderol wrote:Vacuum yes. Brush NO. On an old bit of kit that would be likely to break bits that have become brittle with age and heat.

Each fan is bolted to a heatsink within the body of the amp, drawing air in from the front of the amp through the heatsink, very much like a CPU cooler does. The fans aren't on the rear of the amp as you'd expect them to be. 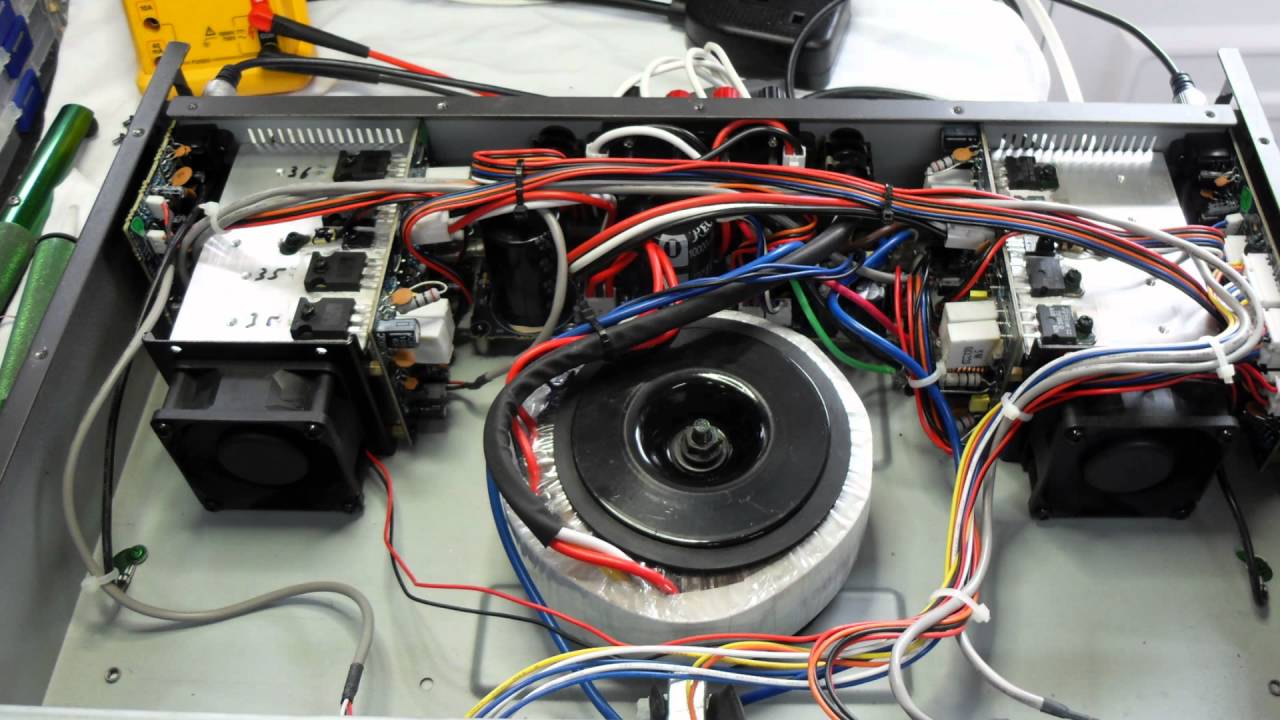 So to properly clean out dust and dirt from the heatsink, you'd definitely need more than just a vacuum to do so. By saying 'brush', I should have been more specific as I had a small artist's paintbrush with very soft bristles in mind.

This internal heatsink and fan arrangement also means that you simply can't remove the fans and try bolting more heatsinks to the casing of the amp.

We currently don't know how old the amp is, it's still available to buy new. And if it is so damaged by heat as to be damaged by a light brushing, then if it was mine, it's something I'd want to know about!

Edit to the above:

Firstly, thankyou everyone for the overwheling amount and detailed responces and thanks for not making your answers too complicated.

Im using it for home recording using a DAW Cubase so little humming or swueaks make me think its the recording. I will open it up tonight and see if I can Identify the fans..

Here is the fan link hope it works..

How do I insert photo?

I can post the image using my PC, but not a tablet. to use the 'Img' tabs you need a web address that ends in .png or .jpg.

In Windows, I right click on the image, select 'save image link', then paste that into the SOS reply window. Then highlight it, select the 'Img' option box and there you go. 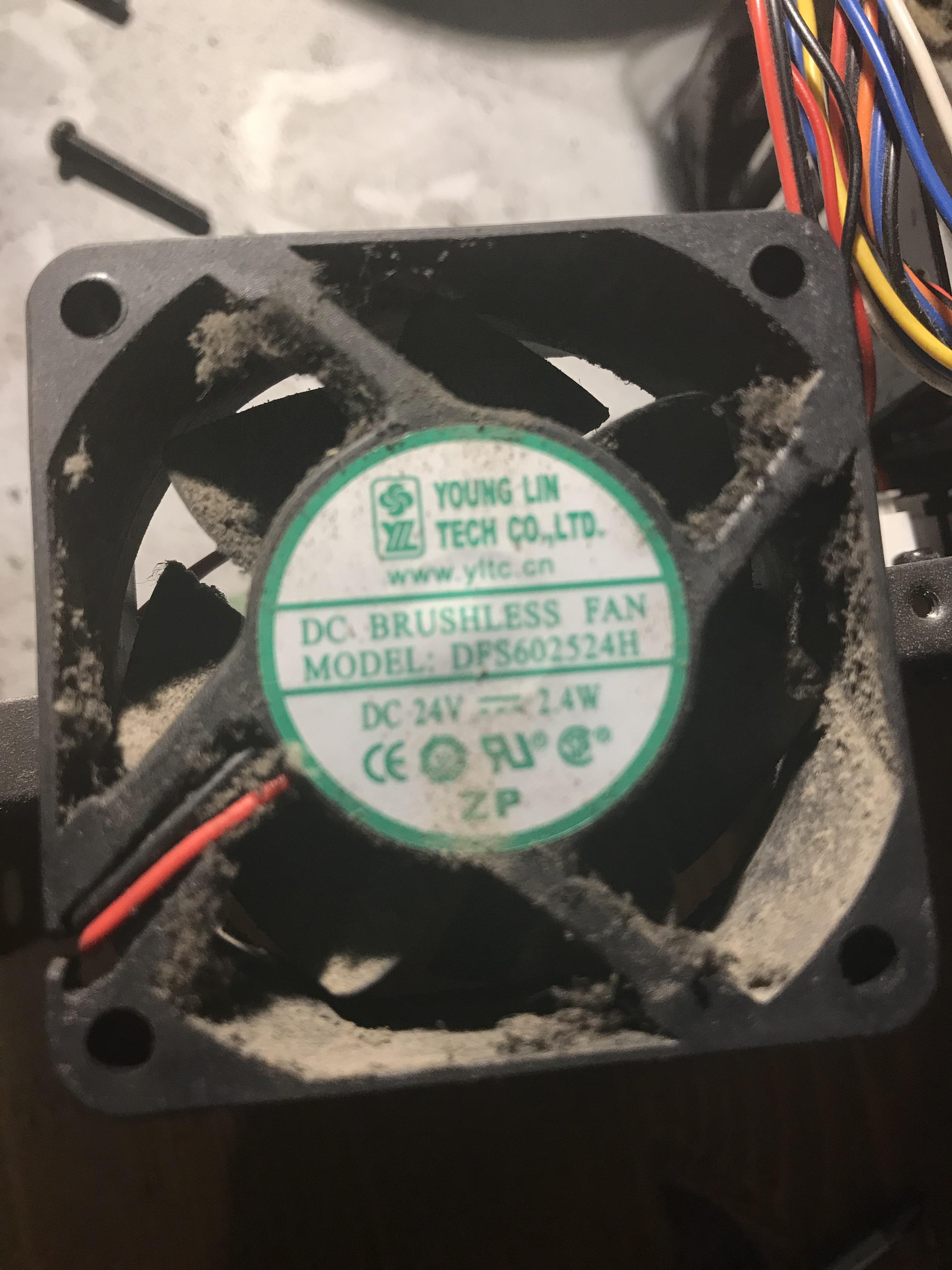 The fans are pretty dirty, so I'd imagine the heatsink is dirty as well. A good clean and the heatsink will be more efficient and the fans will run slower.

Current Yin Lin DFS602524H fans seem to be rated at 3.4W, not 2.4W, so maybe the earlier label had a typo, or it was found to draw more current than stated. The design may have even been revised since then to make it more reliable.

A DFS602524H on one data sheet I found for another manufacturer's model is quoted at 31dBA , but without knowing how far away from the fan that's measured (say 1 metre), it's difficult to compare between examples. But they are classed as 'silent' fans. Looking on Amazon other similar sized fans are quoted at 36 or 37dBa, so significantly noisier than the Aurics one.

But the fan noise will have been measured on just the fan itself, unattached to anything.

Bolting it to a heatsink will cause turbulence on the intake into the fan, so will make it a bit noisier. And any vibration of the fan can be amplified by what it's bolted to, especially if a fan frequency can cause the heatsink or amp casing to resonate.

So I'd suggest giving the fans and heatsinks a good clean and tightening all the bolts and nuts holding the fan to the heatsink, the heatsink to the case, and anything else that looks like it might vibrate.

The fans bearings may be wearing out, so if you can find another 60x60x25mm 24v dc fan with a 2-pin connection that does close to 24CFM and is quoted at 31dBA, then it's worth trying. You'd probably pay £20-£30 for a pair. I don't think you'll get anything quieter than that.

I'd have a look at the type of push-on connector used to connect the fan to the circuit board, as there may be a choice of connectors, and you really want the right one, unless you are happy to cut the leads and join the new fan to the old wires.

But if you really want totally silent, then you may have to sell the Samson and buy another amp with no fans. In my opinion, the Samson 300 isn't marketed by Samson as an in-studio amp, more as an amp for PA or one located in another room.

However in mitigation, there are various mixers and synth units with fans in, which can also be on the noisy side.

Thanks so much for the detailed reply. That has answered all my questions and I thank you for your time and really appreciate all your help.

The fact that it’s not really a studio amp has pricked up my ears a bit and I will probably end up using it (with replacement fans and a good blow out) on my stereo and purchase a new studio amp (recommendations welcome).

Thanks again and I really appreciate all your help.

It can be used in a studio, but you'd need to place it out of the way if the fan noise is an issue. It all depends on how quiet you need the studio to be.

If it's also a recording area for acoustic instruments, then there's always the option of turning the amp off whilst recording as you are unlikely to want the monitors playing at the same time when using headphones.

Shaga Matula wrote:I will probably end up using it (with replacement fans and a good blow out) on my stereo and purchase a new studio amp (recommendations welcome).

If you can find an IMG Stageline STA-400D for a reasonable price then it should be worth buying as it uses the same Hypex modules that I used in my studio monitor amp and it costs less than I paid for the modules alone. Unfortunately it seems to be out of stock in many places.