How to remove ultrasonic noise from vinyl capture

Print view
For everything after the recording stage: hardware/software and how you use it.
Post a reply
6 posts • Page 1 of 1

How to remove ultrasonic noise from vinyl capture

I have recently started capturing my vinyl collection to DSD and hi-res PCM using the Korg DS-DAC-10R and the Audiogate 4 software. Everything works great and the result sounds great but I have noticed something which I'm not sure I should be worried about. If I pull the exported WAV file into my audio editor, iZotope RX 8 Elements, I see a band of ultrasonic noise across the waveform. I've included a link to a screen shot with a red box around the noise.

So my questions are:

1. Should I be worried about this band of noise? Will it do any harm to my equipment during playback? I normally play back through an iFi Nano DAC into a Quad Vena II amplifier.

2. If I should be worried about it, how do I go about removing it? Preferably using the editor I already have. 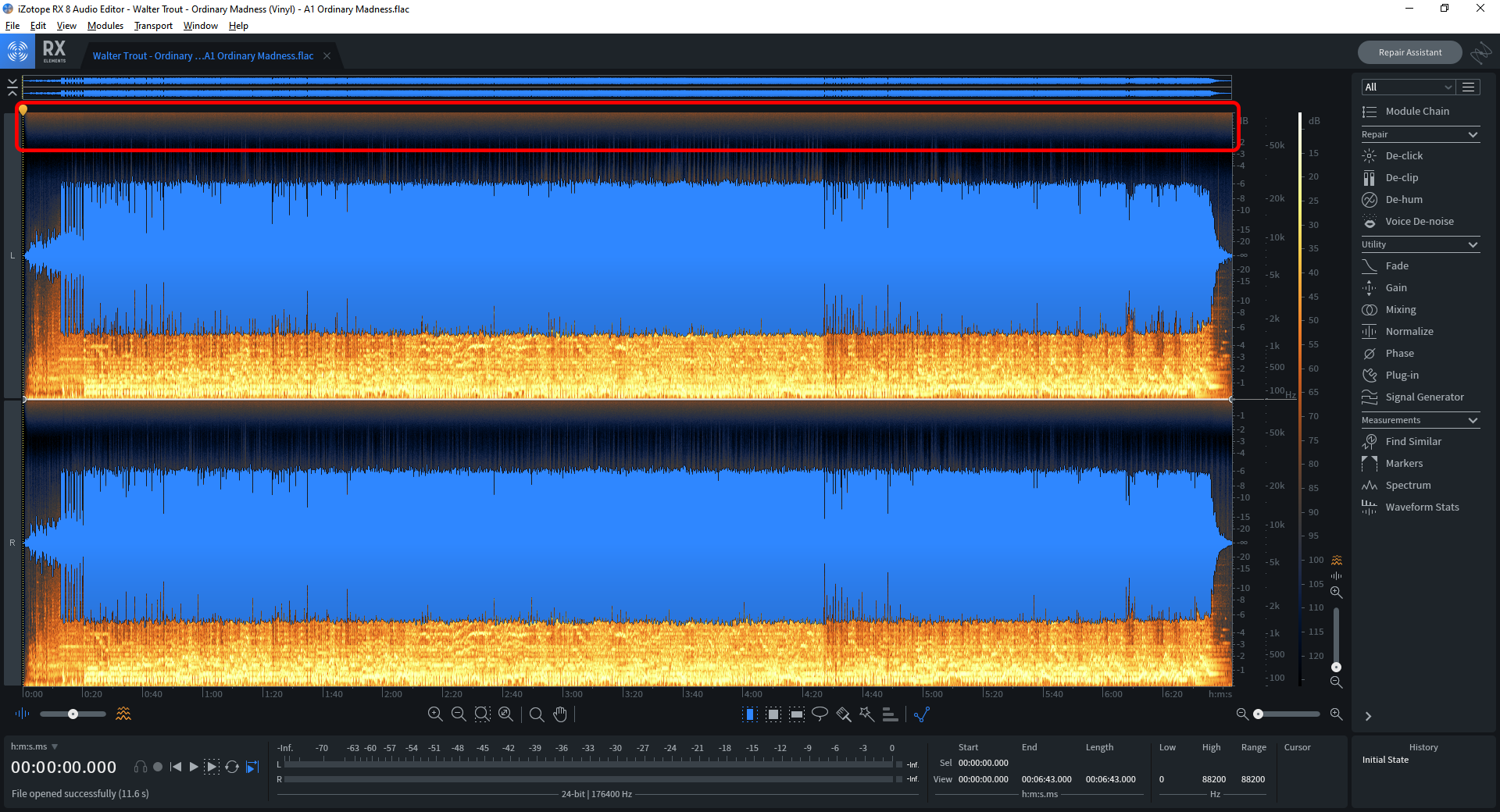 That looks a bit like noise shaped dither to me which is needed to prevent any truncation distortion when reducing the bit depth so it isn't a good idea to remove it.

Thanks for the info James.

It just looked a bit odd, I've never seen it if I capture directly to PCM, only when I've captured as DSD then exported to PCM.

Your direct capture to PCM probably uses flat dither which wouldn't be so noticeable. You may find that there is an option to change the dither type used when converting from DSD to PCM.

Starbuck wrote:If I pull the exported WAV file into my audio editor, iZotope RX 8 Elements, I see a band of ultrasonic noise across the waveform.

Yes... that is what the DSD format does.*

1. Should I be worried about this band of noise?

No... not unless your pet bat complains about headaches. ;-)

Will it do any harm to my equipment during playback?

No. It's already at around -60dBFS by the looks of it, and your speakers/headphones/earbuds will be well into their natural roll-off well before then anyway, so there won't be enough energy to cause any problems to drivers. It could potentially cause issues with intermodulation distortion on inferior electronics, but that's very unlikely with anything modern and half-decent.

2. If I should be worried about it, how do I go about removing it? Preferably using the editor I already have.

If it worries you and you really want to remove it, a simple second-order low-pass filter will do the trick easily enough... and that will stay done if you store the file as 'high-res' PCM... but if you re-encode the processed track as DSD it will come right back again!

And the filtering will also introduce a load of HF phase shifts you probably don't want into the bargain, anyway!

So basically, I'd say if it already sounds great, there's really nothing to worry about... stop looking for problems that don't exist! :D But personally, I'd record in standard 24/96 PCM...


*The DSD format is a great concept in some ways, but the original implementation is fatally flawed... and that's why Sony subsequently had two goes at introducing variants with much higher sampling rates to try and come up with a system that worked as originally advertised. And one of the inherent aspects of a single bit PCM format -- which is what DSD actually is -- is that it needs a heck of a lot of (ultrasonic) dithering.... and that's what you're seeing in that RX spectrogram!

[Edited to add -- exactly as James has explained!]

Thanks everyone for the advice, I'll carry on doing as I'm doing :thumbup: :)