You can tell your Bro to bugger off though if you want to. It is your build!

Nearly 40 years of planing, sanding and chiselling have given him some pretty big muscles so I tend to do what he says...

blinddrew wrote:Plus you'd have to put up with years of 'I told you so'. :)

Having got over the hump, so to speak, I decided to rattle on and do something I'm a lot more comfortable with - fretting. Although just to make it more interesting, and in keeping with the reuse/recycle theme, I decided to sort through Col's tray of used frets to see if I could find enough of them to fret the Dobro. Here's the pile: 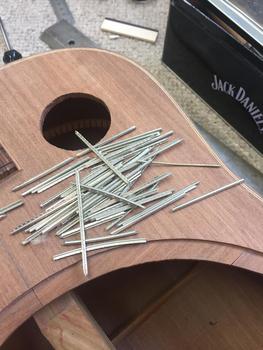 There was almost a complete set of frets that had been fitted to a restoration but due to some problem had been removed before they were stoned and finished. They had been cut for use with a bound fingerboard so there was a bit of the tang (thing that goes into the fret slot) missing at each end, but superglue would fix that. I completed the set with some offcut fret wire of the same size (2.4mm x 1.4mm approx), although judging by the colour slightly different material. Hey ho.

To fit the frets, I checked the depth of the fret slots then widened out the tops of the slots with a hacksaw, taking care to only go down the smallest possible amount, less than the depth of the saw teeth. Some people say you don't need to do this but it helps avoid problems getting the fret all the way down. Then push the fret in and give it few firm taps with a hammer. 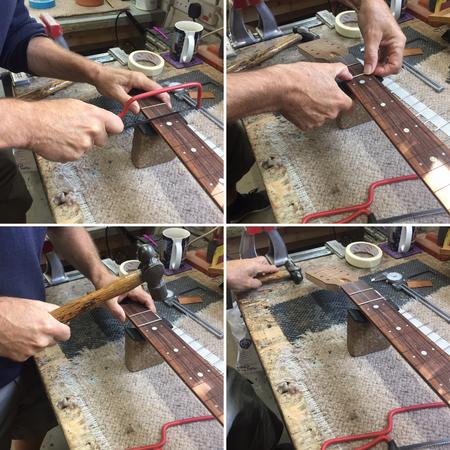 Once all the frets are in the ends are glued down with superglue. Again, not everyone does this but it avoids problems later. Just run some glue under the ends of the fret and clamp it down for a few minutes using a fret clamp with a caul of the right radius. 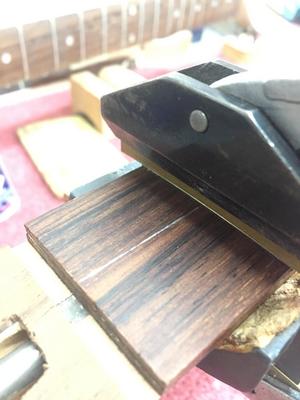 Where the fingerboard is over the body you can use sliding clamps: 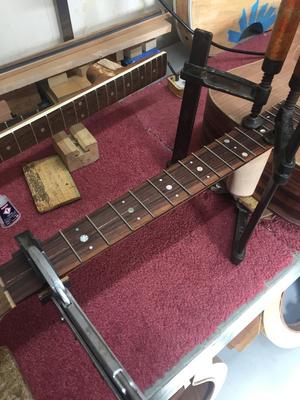 Then I chamfered off the fret ends using a file set at an angle along the edge of a block: 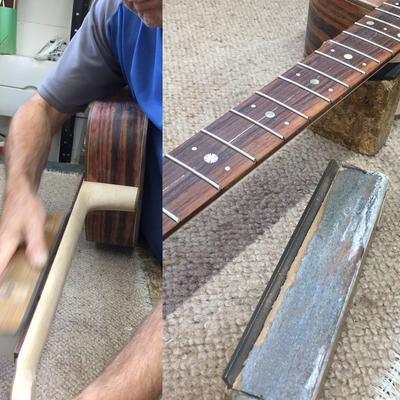 Stoning and crowning be done later. And that's it for another few weeks!

Good to see you're over the hump :)

I'd have thought you are at a stage where you could clamp the neck to the body and fit a top and bottom E string to test the intonation out. If you need another 3-4mm of length, it's probably easier to add some wood to the back of the heel (as you are still working on it) and move the neck forwards, than to move the whole spider/resonator plate back by that amount.

Yeah now I have the frets in, next visit I’ll be rigging up a nut and saddle and looking at how it sets up.

The radio alarm goes off and Sonny & Cher kick off the day. That's right - Groundhog Day.

Remember I had this concept of building this thing using recycled bits wherever possible? Including the frets.

This month it was time to stone and profile those frets. This involves using 250 grit wet and dry paper on a long block to stone the frets dead level, then shaping the now flat tops of the frets so they are domed.

Starting with stoning, I marked the frets with a sharpie so I could see where I have been and set to with the long block. The idea is to stop when all parts of all frets have been touched: 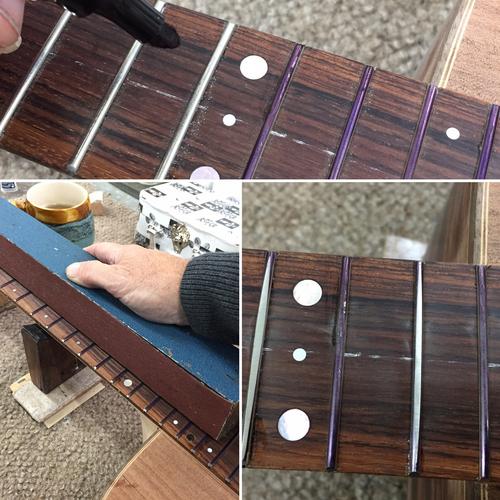 It turns out putting those recycled frets in wasn't a great idea. In fact it was a Bad Idea. The problem was they were not all from the same supplier, and I was relying on being able to measure them by hand with calipers to check they were all the same height. It turns out they weren't. When I came to stone them level two of the frets were not being touched (see pic above), and I was having to take quite a lot out of the other frets to get down to them.

I referred the problem to the Master. He thought if I did get the other frets down to the same height as the two low ones I wouldn't have enough left to be able to crown them. Theoretically I could replace the two low ones with taller frets, but why mess about?
Out with all the frets: 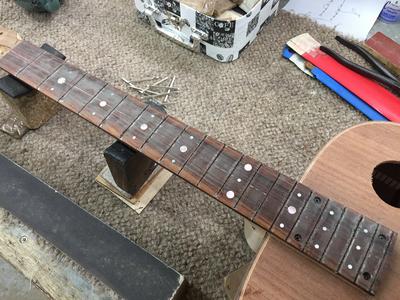 Oh how we laughed..

@manfromglass No really it was all very jolly in the workshop that morning. Really.

So after a break for a bit of light-hearted swearing, I collected up as many of the little bits of rosewood that had splintered out when I pulled the frets as I could find, cleaned off the fingerboard, and using superglue, the splinters and sanding dust repaired the fingerboard surface as best I could. A final sand, check the fingerboard is level and still has the right camber (which it did), and start the refret, this time with new fret wire.

To do this I first cut the end off the fret wire using some flat backed cutters (normal cutters are no good as they leave a point on the cut end.) I then lay the wire along the fret slot and cut the wire to size, flat side of the cutters against the neck. Bang it in and on to the next. (Just realised in the pic below the order is clockwise rather than across) 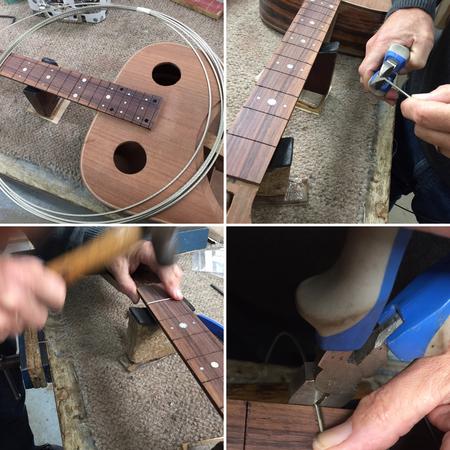 I then superglued the fret ends and clamped them down as before, and chamfered off the fret ends. I was now back to where I had been at 6 that morning. I then stoned the frets level, this time no problem. I sat back and admired the day's progress: 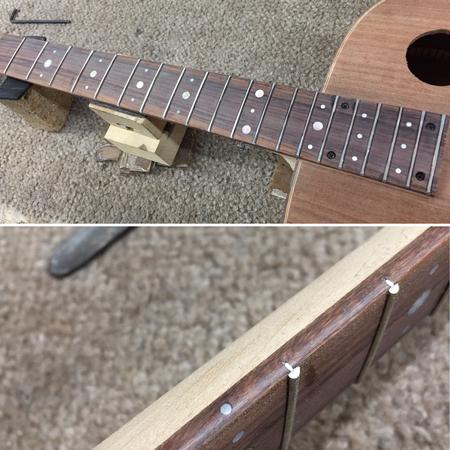 Next I profiled (or crowned) the frets. I used a crowning file which has two grooved edges, one deeper than the other. I used the deeper edge to take off the sharp edges caused by the the stoning until there is just a narrow line along the top of the fret where the file hasn't touched, then the shallow edge just to finish off.

Then I took a small file to the fret ends to round them over, cleaned off any superglue with a file then scraped the fingerboard to leave it clean. Cleaning up revealed a couple of tiny holes I'd missed before so I dropped a couple of drops of superglue in them and will now leave it till next month. I estimate this guitar is now 15% superglue. The frets will be finally cleaned up and polished later. 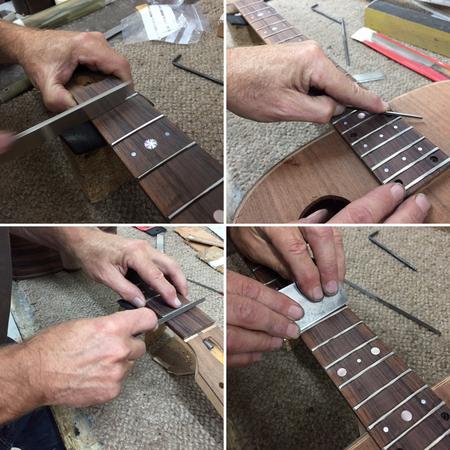 So you'll soon be finished yeah?

I thought that a few months back!

But construction wise I am pretty much there. I’m sure there will be some drama or other before I get there but I can see the finish line.

Once I’m happy the guitar can be set up the next big job is finishing. Lots of sanding, more sanding, even more sanding not to mention sanding and polishing.

Top 10 Boring Things That Are Really Important In The Studio
3 days 13 hours ago.