Back in the workshop last week so here is this month's progress.

I finished gluing the back braces, shaped them and cleaned up. Here's what the back looks like now: 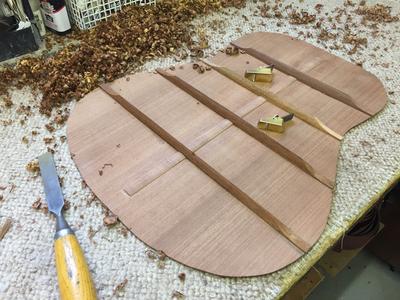 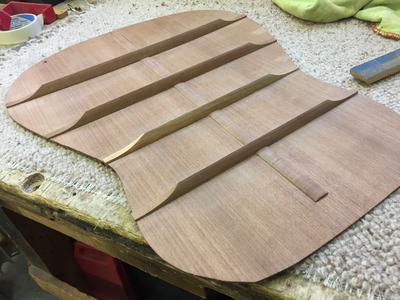 Next I need to get my new back onto the damaged Tanglewood body. Double checked the sides are OK, then looked at the lining. Obviously it's all over the place from when the old back came off.

Not sure if it's really visible this photo, but the blocks at either end are 2-3 mm proud of the lining, and the lining itself is ragged. Also the lining need gluing back in a couple of places: 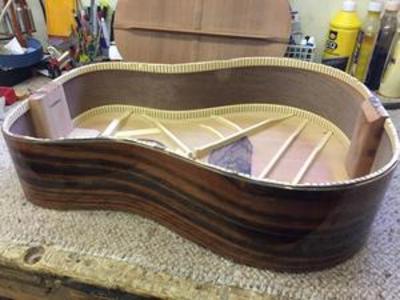 Zoom in on the end block: 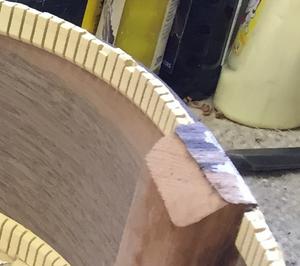 So next I planed the blocks and lining down until they presented a decent surface for gluing to. Planing the end grain of those mahogany blocks was quite a struggle even with a very sharp blade!

I ended up having to take a little more off of the upper bout, so the overall profile of the back will be different from the original guitar by a mil or two. Colin says this is not an issue. He also confirmed I have enough lining left for binding.

I thought I was going to have to do something with the back braces to get them to fit inside the body, but Colin prefers to notch them into the sides. So I drew a centre line on the back and sides, then test fitted the back. I marked where the braces met the body and then cut notches to receive them. Here are the sides all planed down and notches cut. 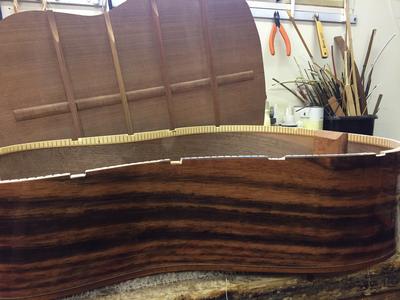 Now I finally get to glue the back on! So here is the obligatory clamping photo: 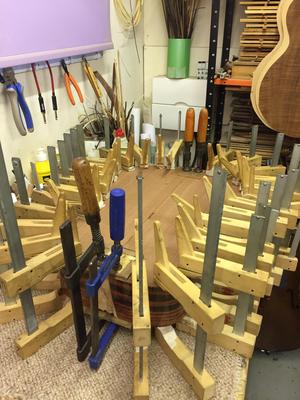 I had to leave before the clamps came off but Colin confirmed the next morning the edges are all securely fixed, and I have a curve in the back both laterally and from top to bottom as I should. Great! Next month, get on with the front.

We also had a chat about the neck. It's a 642mm scale length which is probably different from the body (Wonks estimated 650mm from spec sheets). This is only a problem if the new bridge position brings the cone too far forwards to fit on the top, which looks a real possibility. It also doesn't have a much of a heel. Colin casually says there will be some interesting woodwork going there at some point.. might have to change the neck length, build a heel.. OK I say...

Interesting neck scale length - 25 ¼". So it's only ¼" shorter than the norm, which doesn't seem like it would pose too big a problem on a dreadnought body.

Nice to see you working with your brother, especially as you live a long way apart so I expect you don't normally see him that often.

Yes it's great, I've been doing a few days a month for him for about a year. I've progressed from general sanding duties to fret stoning/profiling and refrets to simple repairs.

Also get to drink beer with him on a regular basis now, what's not to like?

adrian_k wrote:Here are the sides all planed down and notches cut.

Am I missing something here? Should the notches not only be in the kerfed lining? Why did you notch the actual sides too? I'm no luthier though - just curious!

The notches in the side will be hidden completely by the bindings. The alternate method is to notch the kerfing but not the side itself, but when you route the binding channel you expose the notched brace ends anyway.

The more I understand Music, the less good I get at it.
Top

zenguitar wrote:The notches in the side will be hidden completely by the bindings. The alternate method is to notch the kerfing but not the side itself, but when you route the binding channel you expose the notched brace ends anyway.

I had the same thought but looked at another build and saw that the binding would cover the notches.

Great project! Can't wait to hear how it turns out. :thumbup:

I have a Turkey Tone 7-string square neck that takes the idea of "recycled bits" to an extreme. It's pretty loud.

This looks great! Keep at it, I eagerly await more!

Nothing really to add other than I'm loving this thread. :clap:

Is it too late to cancel cancel culture?
Top

Back in the workshop last week. Very busy at the moment finishing instruments and a few 'urgent' repairs so didn't get as much done as I was hoping. Still, the new back hadn't come off in my absence so I took that as a good sign..

The back is fitted slightly oversize, so first I routed it down to fit the sides: 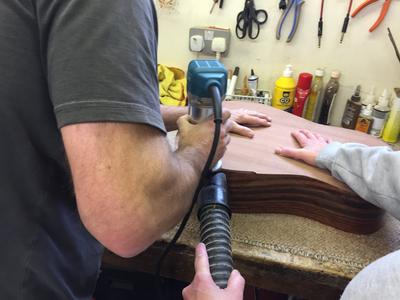 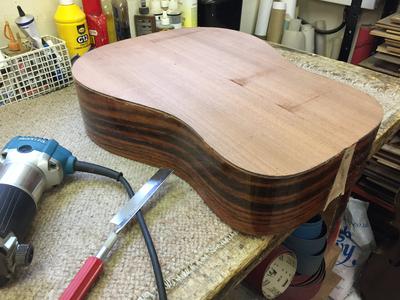 Now it's time to remove the Tanglewood top.

First of all I routed off the binding: 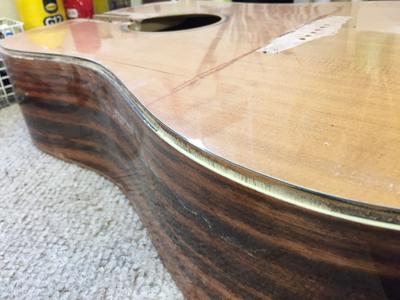 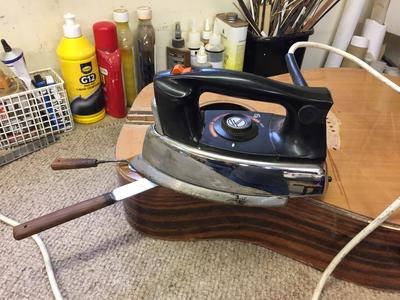 The old top is going for kindling so I don't need to worry about damaging the finish with the iron, which makes it all a lot easier.

Mastering Essentials Part 3 - How loud should I master?
6 days 15 hours ago.