Eggle out of retirement

Eggle out of retirement 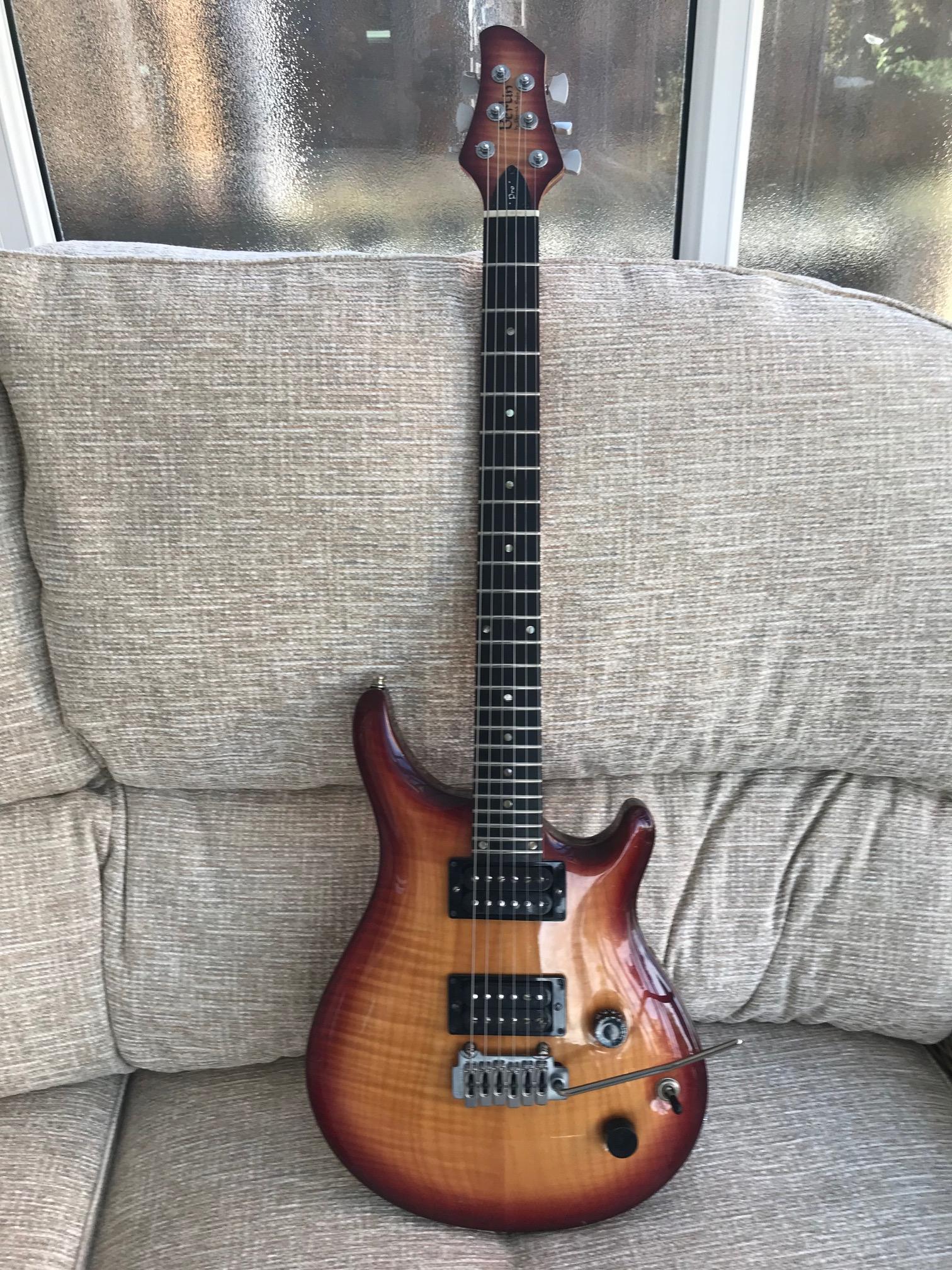 A beautiful guitar but my one niggle was the Wilkinson locking trem. Once set up correctly it is fine (almost Floyd Rose like in it's operation) but it is a little difficult to get right and a pain if you want to change string gauges or tunings, certainly not a 5 minute job.

For many years it was my only six string electric but, as my 'collection' grew, it fell out of favour and I haven't used it live for several years (the trem let me down last time I used it at rehearsal which made me lose confidence). The band I play with these days de-tune by a semitone, so I never considered it, but the other week I decided to bight the bullet and re-set it for the lower tuning. It made me remember why I loved this guitar so much, but still there was the lack of confidence in the trem. I had a look on line and was pretty sure that I had identified a suitable, non locking, Wilkinson replacement. After a quick chat with the CEO of Patrick Eggle guitars at the NW Guitar Show last week I was happy that I'd picked correctly so, as an early birthday present, I treated myself and the guitar to a new VS100N trem.

Fitting was easy enough (I kept the imperial posts from the old unit together with the spring claw) and after a fairly straight forward setup the guitar is ready to go. The new trem is much firmer, which I like, and tuning stability is good. I'm now looking forward to the next gig. 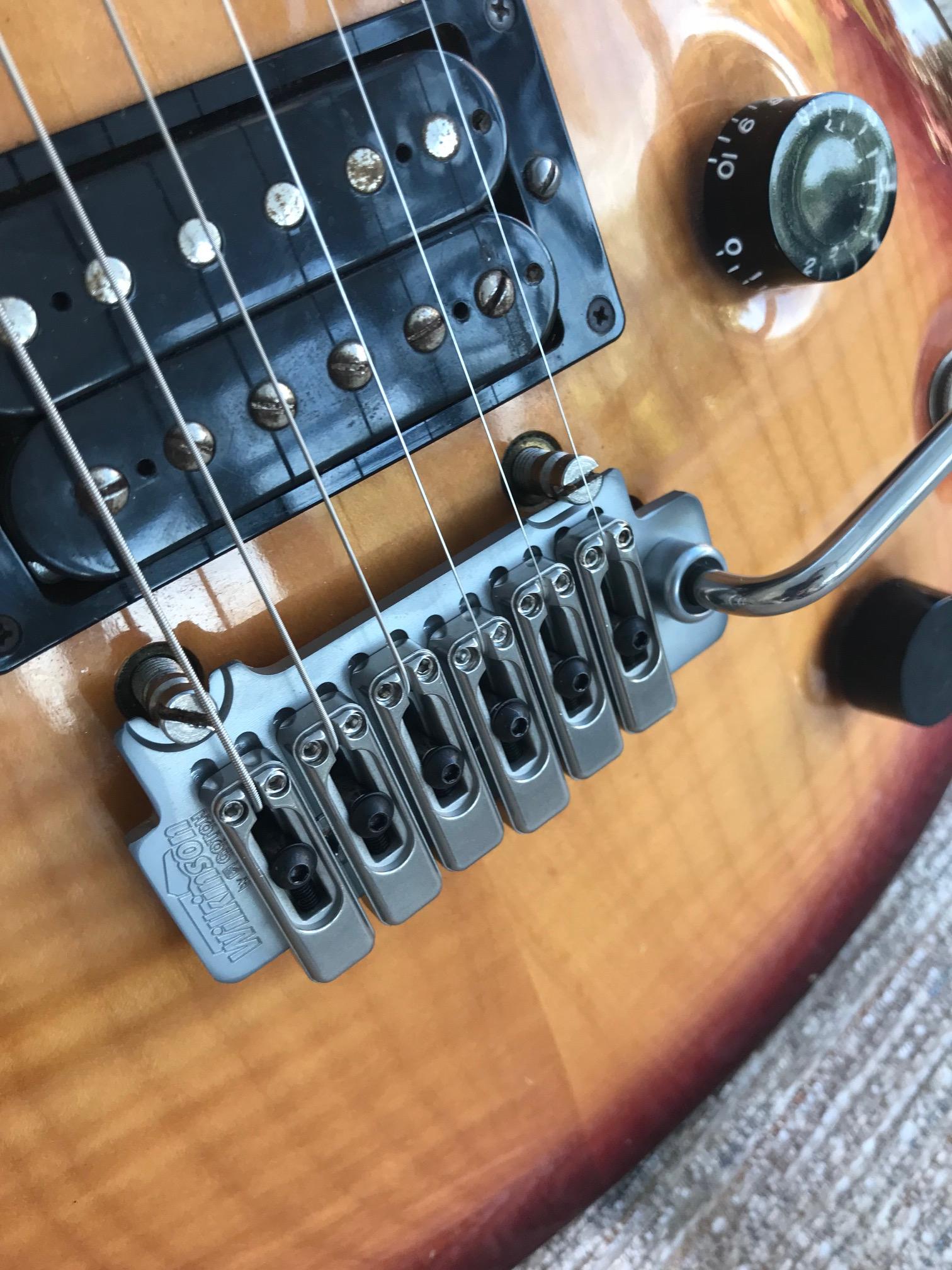 Gah! Why did I look at that picture? Just when I managed to wrestle my guitar-lust into a tiny voice in the back of my head.
:headbang:

Cheers. Demo wise I think you'll have to wait for my offering for the SOS Forum compilation album. I've been using it to practice to all the bands live recordings and I happy that I can cover the whole set with it. It was a little strange coming back to such a skinny neck after a few years of playing PRS, plus it's a 24 fret neck, but I've quickly got used to it.

I had thought about putting a set of Bare Knuckle pickups in it and ditching the rotary coil selector in favour of a more conventional tone - but I'm happy enough with the Seymour Duncan's for now.

Is the neck as wide as the PRS?
I ask because my fingers have gotten a bit thicker as I’ve aged and on my regular guitars it’s tricky to play Am in first position without muffling the open strings. PRS was going to be on my list of those to consider.

My PRS all have wider, and deeper, necks than the Eggle (the Eggle is a slim C).

PRS do a range of profiles, his may help;

Depends. I have a pair of 90s Eggles which I still use. 'Red' was built to my spec - chose the body blank on the factory floor. IIFC I played several guitars with different neck profiles, and I definitely didn't choose the most skinny option. If you are looking for something specific in the neck department you should try before you buy.