For my guitar purchase this year, I have just taken delivery of a new 2019 Gibson Firebird, so I thought I’d give you my thoughts on it.

The Firebird has been on my wish-list for ages, but previous experiences of playing one in a shop were less than ecstatic due to the awful banjo tuners and neck-dive. I simply couldn’t get the damn thing in tune, let alone keep it there.

So when the 2019 Firebird was announced, with mini-humbuckers and standard tuners, I was very interested indeed. 2019 also saw the reintroduction of rosewood fretboards on these guitars. And when I saw the Andertons’ demo of them, I just fell in love with the sound and had to buy one. In fact, I ended up buying the very one that Lee’s playing in the video.

Despite Andertons warning me that it was their demo model as they had sold their boxed stock, there were no scratches on it at all and the overall finish was very good indeed. But there were some negatives: The action was high at both ends and the fingerboard was very dry.

There is a fundamental problem here with the current manufacturing method as the neck angle is too shallow for the bridge used. Previously, Gibson were using the old-style ABR bridge with the posts screwed directly into the body and not into inserts, as on this guitar (and I think inserts are now common throughout the Gibson solid body range). And the inserts add around 2mm to the height of the bridge, meaning that it can’t be lowered as much as the vintage style bridge.

As it’s a through-neck guitar, increasing the neck angle requires a slightly thicker block of laminated woods to start with, increasing the unit cost. It’s not easy to adjust in production like a glued-neck guitar, where it’s merely a question of adjusting the CNC machine to alter the join angle at the end of a standard neck. So Gibson really need to either revert to the screwed-in post ABR bridge, or recess the insert so that it’s flush with the top of the body, or alter the bridge design so that it’s lower overall.

The result is that even with the treble side of the bridge down as low as it will go, there was still an excessive string height over the upper frets. This wasn’t helped by excessively high nut slots. The neck relief was reasonable, but in order to reduce the action I had to give about two ¼ turns on the truss rod to straighten the neck and pull the strings closer to the frets. I then took the strings off and applied two lots of lemon oil to the fretboard. It could have taken a bit more, but I wanted to get on with the set-up.

Here you can clearly see the through-neck construction with the multi-laminate neck:

A new set of D’Addario 0.010”s were then fitted and I then got out the nut files. The nut is a synthetic one, which I don’t really like, and of course, I managed to cut one nut slot just that bit too low. But in the meantime, I experienced another D’Addario 0.010” string unwind at the ball end, so that was replaced from my cache of Ernie Ball 0.010”s. So, it was time to replace the nut with a bone one. The old nut was very well glued in, and took a lot of gentle tapping, followed by some not so gentle tapping, before it became loose. A new bone nut was filed and sanded to the right size, then polished, glued and fitted. It looks a lot nicer than the original synthetic block.

The next day, I cut the nut slots without any mishaps then gave the truss rod another slight tweak. The centre strings were still a bit high, so I used the nut files to cut their saddle slots slightly deeper. The action was now playable but is still slightly higher than on any of my other Gibsons. I like the lowest action possible, but it may be too low for others. But the original action would only have been liked by slide players.

So after what I found to be a bit of a struggle; I finally had a playable guitar. And the good points then started to show themselves. No neck dive for a start. It’s not a particularly heavy guitar, certainly lighter than a Les Paul, and the standard Grover mini tuners help to keep the headstock weight down. You’ve lost the carved headstock edge of vintage Firebirds, but the flat profile does help keep the headstock thinner and its weight down.

The mini-humbuckers sound really sweet. No details on them on the Gibson site, but they may well have ceramic magnets, but if so, probably the nicest sounding ceramics I’ve heard. Clean, the bridge pickup has quite a bit of midrange bark to it. The neck pickup has a nice mellow tone to it, almost jazzy, not quite as fat sounding as a standard humbucker. The mixed position has a really nice jangle to it, quite Rickenbacker like. For driven sounds, the result is a good solid tone but without quite the full depth of normal humbuckers. A bit thicker than P90s would be, but with similar note definition. So great for a two guitar band.

Both seated and on a strap, the offset shape moves the end of the neck an inch or so further away from you, so it takes a bit of acclimatising and does encourage you to play further up the neck than normal – again a benefit for a two (or three) guitar band. And because of the shape and the through-neck design with no big heel, upper fret access (22 frets) is superb.

The neck profile is a ‘slim taper’ one, pretty much a modern C-shape that only gets slightly thicker as you go up the neck. Standard Gibson 12” radius and 24 ¾” scale length. The fretboard is bound, with Gibson's standard nibbed ends, so there's no danger of sharp fret-ends.

The bridge and tailpiece are light aluminium. I do like the hex-key top bridge posts, which make adjusting the bridge height with the strings on a doddle. The volume and tone knobs are the 60s-style dished silver top variety.

One other slight problem I've noticed is that this is the first Gibson I've had where the lacquer attracts dust and causes a slight amount of static/crackle when you touch it when it's plugged in and you pick it up before you touch the strings. The bridge strings and even the pickup surrounds are all connected to ground properly. The finish is supposed to be standard nitrocellulose which I've never had a problem with before. It's not a major issue but just slightly niggling. 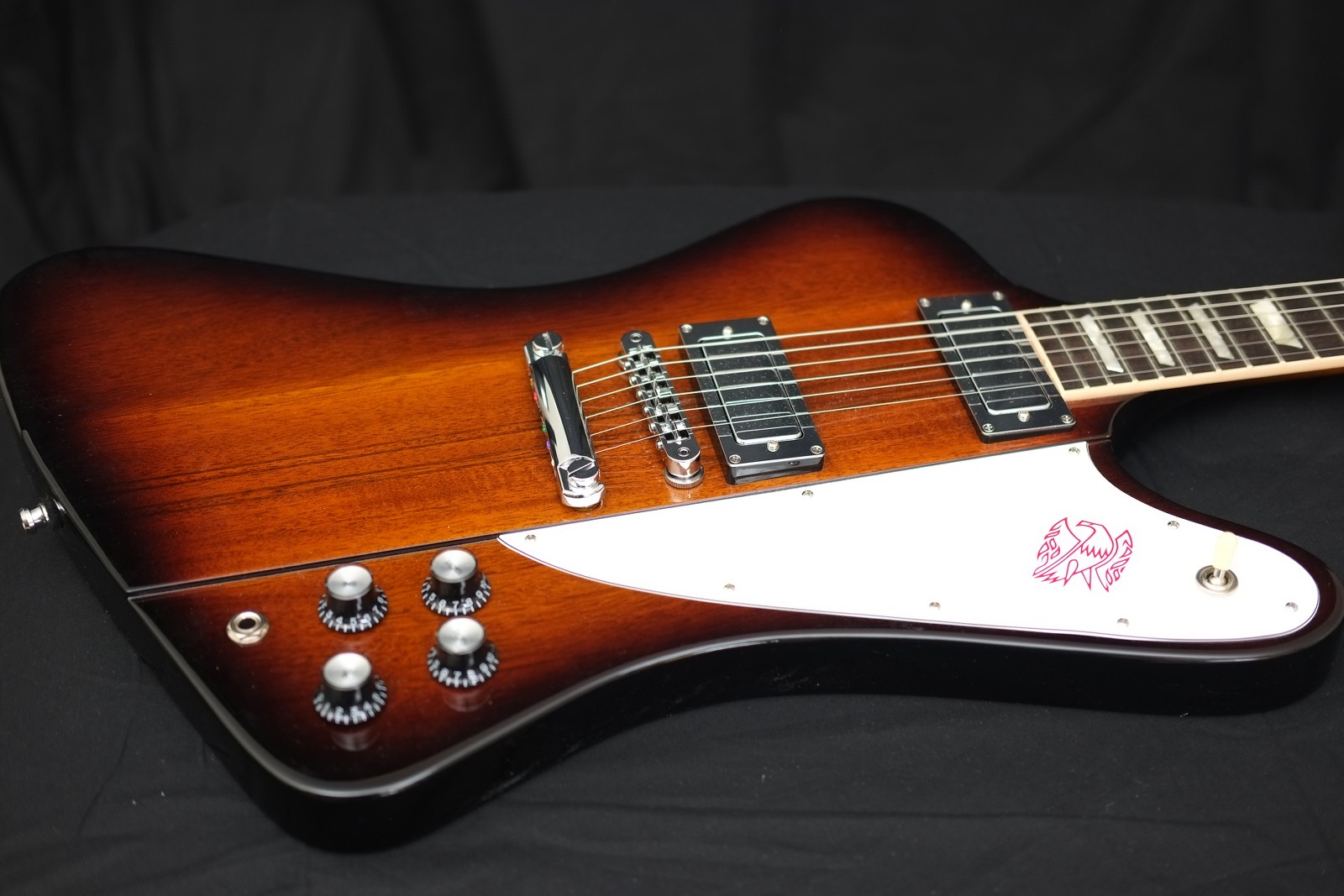 Now I've spent a bit more time time with it, I really like the guitar. i just wish I didn't have to have done all the work I had to do to get it playing well. I'd always expect to have to do some setting up, but nothing like the amount I've done. But that's all out the way now, so

Wow - that's certainly a very detailed breakdown Monsieur Wonks, but a lot of work to undertake to gain a very playable guitar from one that ought to arrive very well set up in the first place.

However, it does look absolutely beautiful! :thumbup: 8-)

I have a strange feeling of déjà vu too, after visiting Facebook earlier today :beamup:

I'm gong to see if covering the rear of the scratchplate with copper foil will do anything to help reduce the static issue.

Looks very nice, but way outside both my finances and competence {sigh} Guys in the vid looked like they were enjoying themselves.
Oh, and you may find the static issue improves as the guitar gets less, ummm 'pristine'.

Nice write up and good work on the set up :thumbup:

It’s annoying to have to put all that work into get a (somewhat) playable guitar but this seems to be pretty common now. Sad!

TBF there are certain similarities ;)

I love them firebirds, but unfortunately I can’t play a slim tapper neck :cry:

Interesting about your dislike for the banjo heads - my son bought a 2017 Firebird specifically because it preserved the original 60s look - the supplied Steinberger tuners feel a million miles away from what I'd imagine vintage banjo tuners might.

As an addendum I passed the link on to said son and he said ...

'Tuning is pretty consistent for me, requires a lot more turning, being 1:1 but the precision is nice'

'His' other guitar is my 'The SG' - the ownership of which is a matter of some dispute between us - which has Grovers.

One thing i failed to mention is that the tuners are quite close together, a few mm closer overall than a Fender headstock arrangement. With the thick kidney buttons, it does make it a bit cramped up there when tuning. You've definitely got to set the tuners vertically first when using a string winder to avoid it knocking.

They could have spaced the tuners out a bit more, certainly an extra 5mm overall would have fitted. but maybe they were trying to maximise the weight balance. Possibly one reason the control cavity is so small and the control knobs close together, to minimise the amount of wood lost from the end of the guitar and help stop neck-heaviness.

I only know about the one Firebird with banjo tuners I tried in Guitar Village, Farnham a few years back. No way could I even get it in tune. Not sure if they were fitting the Steinberger tuners then (the Steinbergers have a 40:1 ratio). The banjo tuners give a slightly better straight string pull over the nut than the conventional tuners do, (which angle the bass strings very slightly), so unless the nut slots were very sticky, the tuning stability should have been good. But, maybe with a proper set up and new strings, it could have played OK. But the neck dive on that guitar plus the tuners (and the fact that without a suitable stand available I couldn't put the guitar down safely) meant that I wasn't going to spend £1200 (IIRC at the time) on one just to find out.

That’s a beauty Wonks! Alway loved the Firebird.
If it was mine, I’d have to try out a black pickguard on it at some stage.... :D

Have you started saving for the Explorer and the Moderne yet?

Let me share my recipe for Wabbit stew with you!
Top

IvanSC wrote:Have you started saving for the Explorer and the Moderne yet?

So I think the mounting point for the ABR1(?) is the same on Matthew's Firebird, but it doesn't seem an issue for his action