I've just finished setting up a Gibson ES-333 for someone local to me who came to see a 1x12" Marshall cab I was selling but ended up not buying it (it was physically too small for his needs). But he did see that I had various guitars in states of disassemble and asked if I could set a guitar up for him. I must admit, we both thought the action was unplayable as it came - a good 10mm at the 12th fret. Don't know the full details but I have a feeling this was a recent eBay purchase for him.

The Gibson ES-333 is based on the ES-335 but has a removable back panel for control access. One of Gibson's more budget-orientated products at the time, and it shows in the level of finishing (satin, not gloss), rough f-hole edges and the rear control cover sits partly sunk and partly proud with respect to the body. And I'm not taken with the rather drab brown finish, though I know it's similar to one of the '70s ES-335 colours. Made at a time (2003) when Gibson's quality control was pretty poor. But the neck is decent, a bit square-shouldered for my tastes but, still very playable and the replacement pickups (very early Bare Knuckles with no model name on the backs) sound nice. 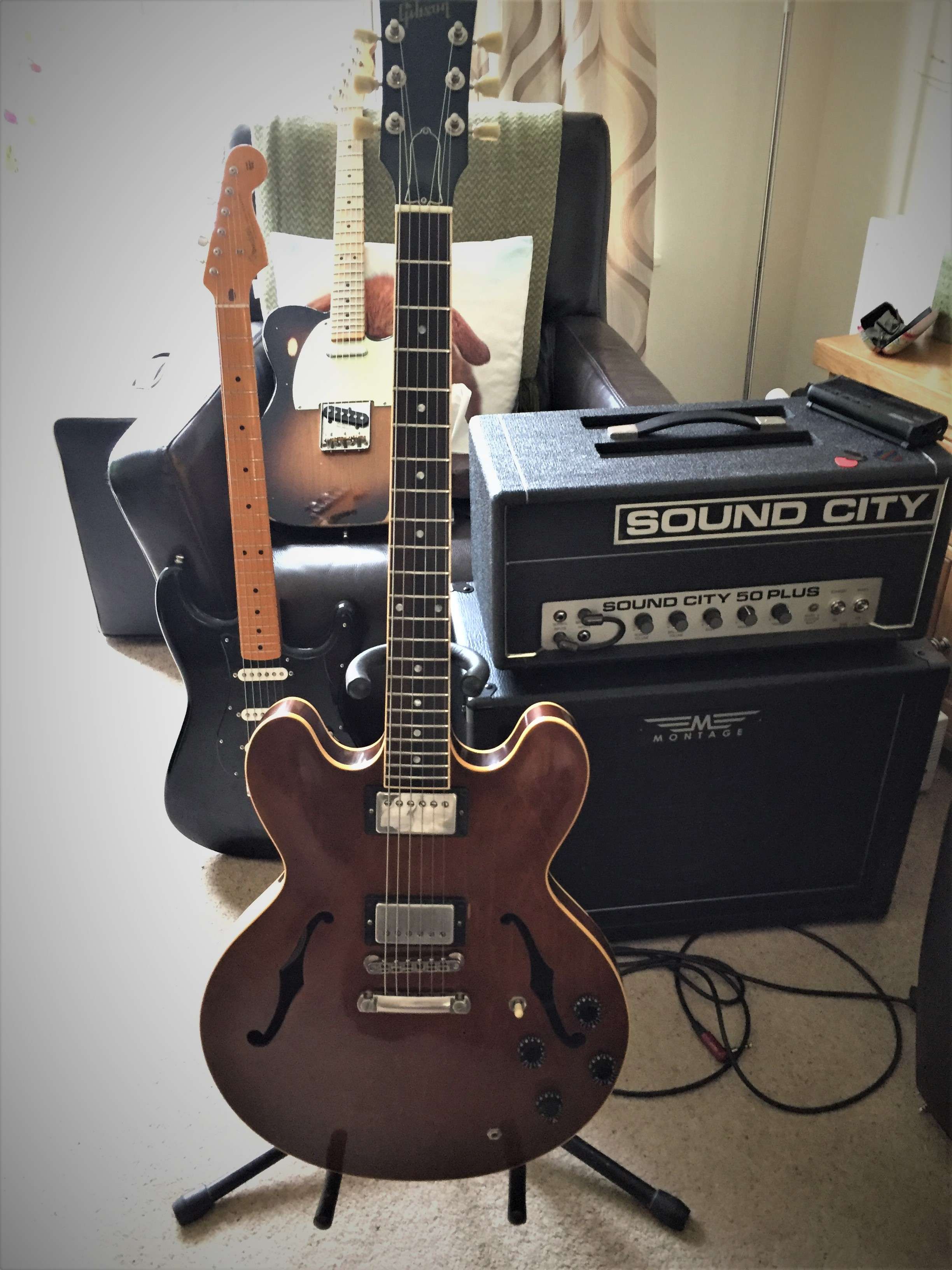 All was well until it came to the bridge. Tried turning one of the intonation screws but immediately the head sheared off as the screw was completely corroded to the saddle. Tried turning the stub with pliers but it wouldn't budge, even after a soak in WD40. So I remembered about heating things up to budge stuck screws, got the blowtorch out and that did the trick.

Luckily, I had a spare Gibson ABR-1 bridge, which came from my old ES-335. The original bridge on this got replaced by a Tone Pros bridge as the bridge posts were bent on the original ABR-1 installation. So I took a screw from that, but despite both being the same bridge from a similar year of manufacture, the bloody screw was too long to fit in the slot!

The saddles in the 335 bridge had notches in different positions to those on the 333 bridge (so if I'd just used the bridge as-was, the strings would have would have been in the wrong position on the neck), so I ended up moving the saddles across to the 335 bridge and using the 335's intonation screws.

Also, the 333's bridge came with no saddle retainer wire (though it had the holes for one), so re-fitted the one from the 335's saddle. But the number of times those bloody saddles fell out while I was putting the wire back in place was quite considerable and I may have sworn a few times.

But the guitar is now nicely set up with a medium-low action as requested, some current Gibson strap buttons fitted (the originals were ridiculously small) and the bodywork all clean and the finish is now a nicer semi-gloss, rather than near-satin, as a result of its cleaning.

If I hadn't had that spare bridge, it would have been new bridge time. Not the end of the world, but still extra expense and time.

So never throw any old guitar bits away. You never know when they may come in handy!

Wonks wrote:So never throw any old guitar bits away. You never know when they may come in handy!

Never have, never will.

Think they're 2x2 but i'll have to have a look.

Wonks wrote:So never throw any old guitar bits away. You never know when they may come in handy!