I picked this up yesterday 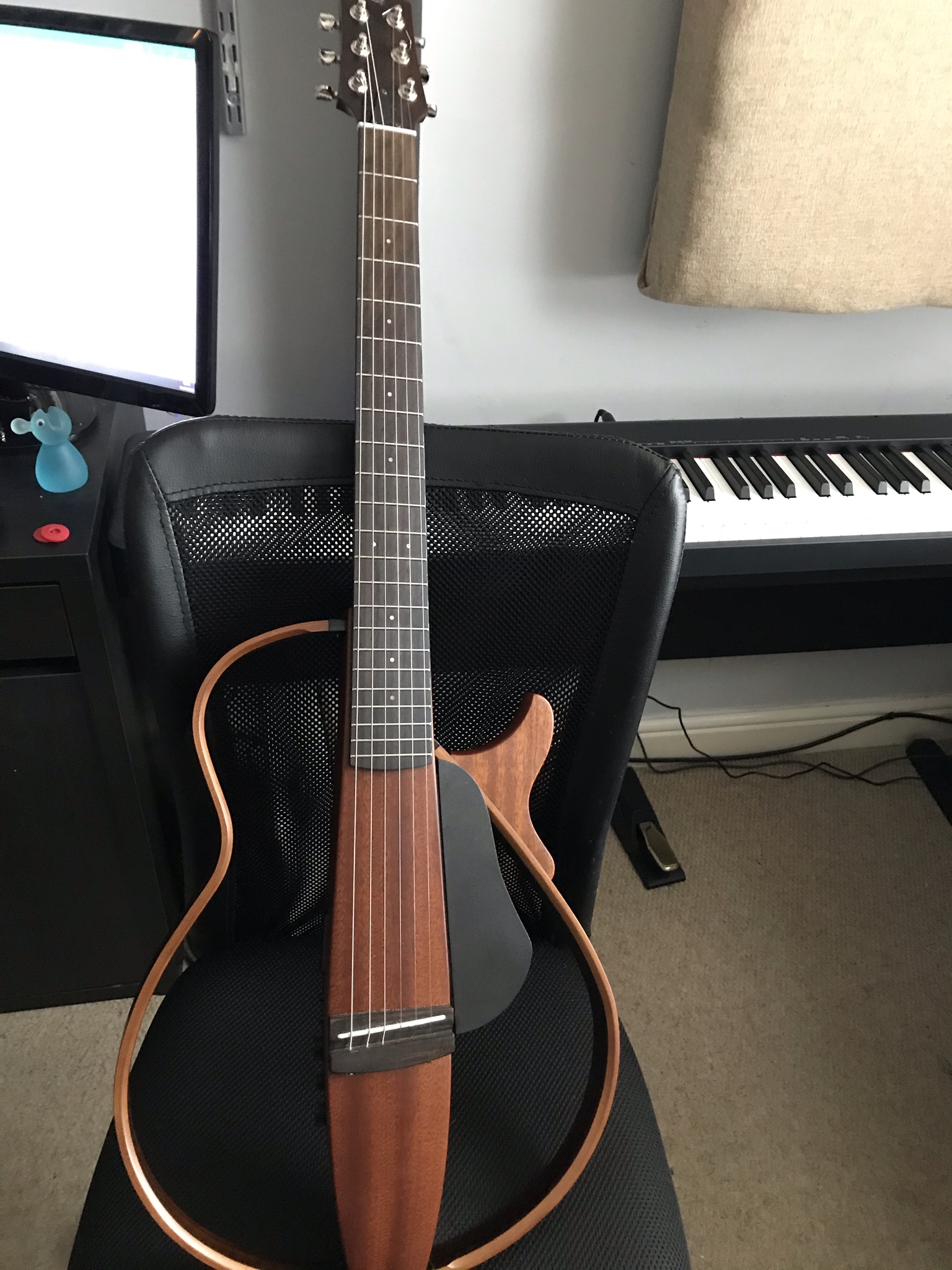 A used Yamaha SLG200S ‘silent guitar’. I’ve been after one for a while but I was umming and ahhing over the price then this popped up in Sounds Affects which is just 15 miles up the road. I actually bought it un-seen as they don’t seem to come up too often and I knew that I’d be kicking myself if I missed it (having missed a Brian May Guitar last year).

The initial plan had been to use it live (remember when that was a thing?) but then it occurred to me that the reason that I don’t play my acoustic guitar very much is due to the volume. I get up early by habit and I tend to do a lot of my practice, through headphones, whilst the rest of the family are still asleep. This guitar is perfect for that.

It plays nicely and I’ve been playing this morning with the headphones plugged straight in (so using the onboard reverb). I’ll try setting up some Helix patches as soon as I get chance. All in all, very happy. I could actually see myself recording with it.

Oh, and the reason that it’s called a silent guitar? It’s because I haven’t told my wife about it

Music Wolf wrote:Oh, and the reason that it’s called a silent guitar? It’s because I haven’t told my wife about it

Interesting. A recording would be nice...?

Dammit that’s another thing to go on the list of itches to scratch. I was up at 4:30 this morning and could have made use of that. Mind you then I wouldn’t have got any keyboard practice done

Never seen one like that. It looks a bit delicate

Folderol wrote:Never seen one like that. It looks a bit delicate

No, pretty solid. Assembly, just slotting the top piece in, is very easy although I did see an online review where the guy put the top piece in the wrong way around and did the whole review that way. I think that there were some comments around the robustness of the earlier model that had a plastic 'frame'.

I haven't recorded with it yet but here's the review from Guitarist mag (both the steel and nylon models).

Great catch! I've been on the lookout for one of these for a while, for exactly the reasons that you mention (from "good to play live" to "good to play when the girlfriend is watching TV")!

Sadly the one I've seen have still been to expensive for my liking, but as Confucius said, If you sit by the river long enough.. (okay, he never said that actually and it was a mis-translation ,but anyways..

Interesting. Not so keen on the piezo sounds but the STRs sound good, particularly the nylon.

blinddrew wrote:INot so keen on the piezo sounds but the STRs sound good

That's what I thought from the online reviews but I have to say that, when playing against a backing track, I'm finding that I like to dial in a bit of piezo. Maybe that will be less of the case when I put some new strings on, which I'll do later today.

It's status has moved from 'silent' to this is my 'mates guitar which I'm setting up for him'. The family think that it's great and have said - "why haven't you got one of these?". It could be going legit very soon when I do a 'swap for some gear with my mate'. Whilst this would be in breach of the strict 'one-in, one-out' guitar sanctions imposed by Domestic Management I may get dispensation in light of the fact that it's not a proper guitar.

Well I re-strung it this morning and realised that it had been strung with 'electric strings' (Nickle, non-wound 3rd). I can't believe that I didn't spot this earlier but I guess that I'm so used to playing electric. Anyway, because I don't play much acoustic, I re-strung it with a set of whimpy D'Addario Extra Lights (10 - 47). Now it really sounds like an acoustic (and less need for the piezo blend). I bit harder to play but that's because I don't practice enough on the acoustic (which was part of the reason to get it).

I've run it through the Helix and it is perfectly possible to kick in a distorted amp sim (although the SLG lacks the sustain of an electric guitar). This widens it's scope and means that I can use it on maybe a third of the set for one of the covers bands (whenever we get back to gigging).

Try a few acoustic IRs in the Helix.

I have an old archtop with a basic UST fitted and, while I do like the sound of the UST (weirdly) it comes to life with a decent IR in either ReaVerb or my Mooer Radar pedal.

I've tried it with the Tonedexter but for some reason I've not been able to achieve anything very impressive, just as well the free option is so good.

Cheers for the tip.

I downloaded a pack from 3 Sigma (Martin 45) since it was only pocket money. So far I've only had a play with one impulse, and it takes a fair bit of setting up so that you can establish that you can really judge the difference rather than just a change in volume, but it seems to add something. A more polished sound.

Whether this will only work for recording or if it can translate to live performance remains to be seen, since there are no rehearsals at present, but it seems to be worth the £8. If nothing else, it will keep me occupied whilst I try all the IRs