Souping Up My SSS Stratocaster For More Tonal Options

Souping Up My Tele Squier For More Tonal Options

I have a great playing 2-pickup Squier Telecaster (made in Korea). The 3-way switch is OK but I wanted to soup it up for more tonal options.

Last month, I replaced the stock control plate with one designed for a standard Telecaster with two single-coil pickups. The solderless installation made the upgrade easy. For me it just "dropped in." (see before-after picture)

It came with Bourns pots mounted to a printed circuit board with Treble Bleed to keep the brilliance from getting "muddier" as the volume is dialed back.

It has three mini toggle switches instead of the stock 3-way blade switch. Two of the switches are on-off-on and control each pickup by turning it Off or On (in either normal-phase or reverse phase.) The third (middle) on-on switch puts the pickups in either parallel or series circuit. The switch layout is simple and intuitive. The end result is an instrument that goes beyond the three stock pickup tones.

After the upgrade, I have six pickup tones. I still have the stock three sounds, but the extra three sounds are distinct and useful. Putting both pickups in series (and in-phase) gives me a strong jazz-like humbucker sounding tone, something that I could not get from my stock Telecaster. And hearing those additional two new intense and more intense out-of-phase country twang tones (switched in either parallel and series) gave me goosebumps. These are glass-shattering tones that can punch out windows at 30 paces.

I'm happy with the upgrade because it gives me three additional pickup tones. 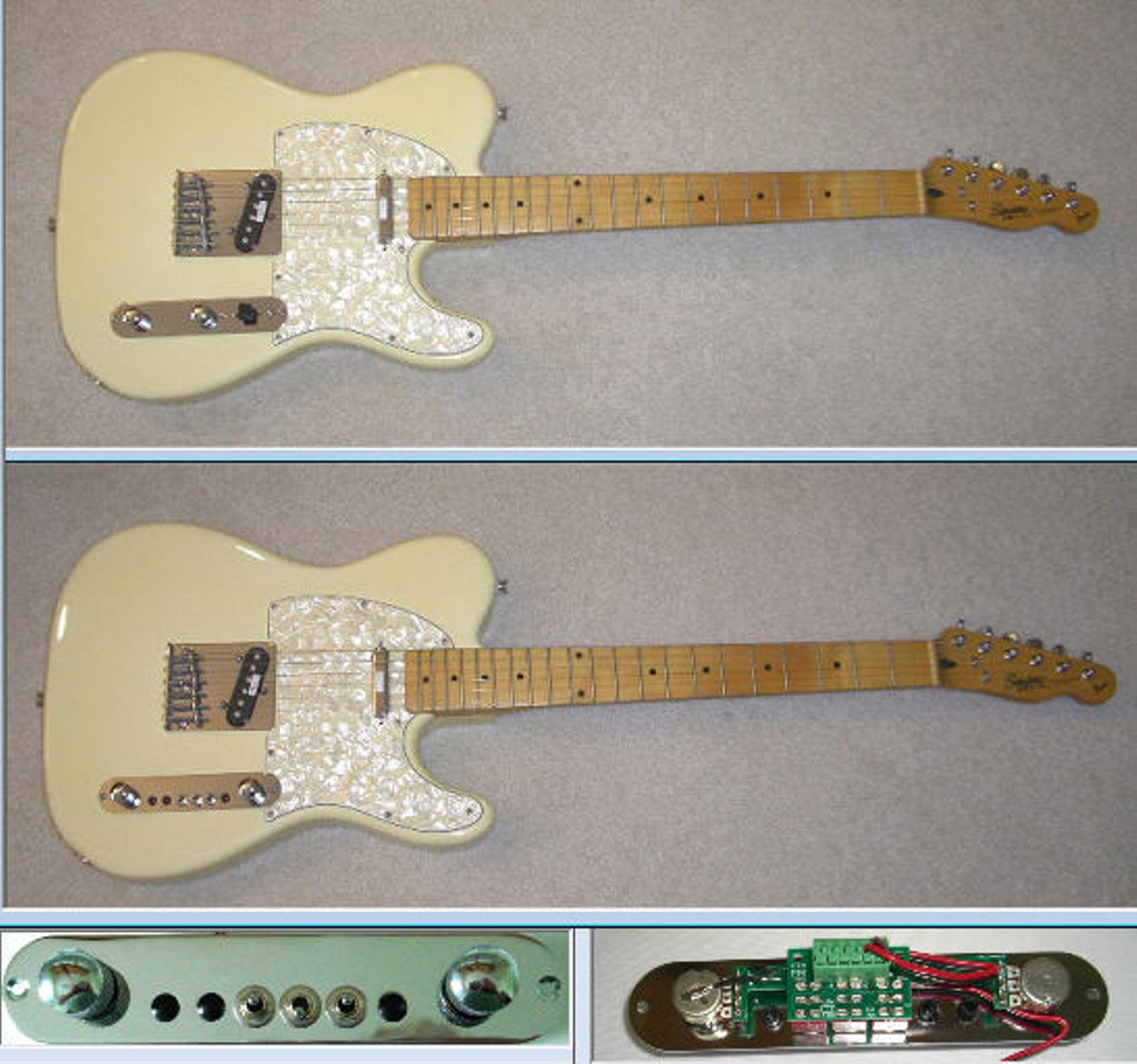 Souping Up My SSS Stratocaster For More Tonal Options

I have a great playing MIJ SSS Stratocaster. The 5-way switch is OK but I wanted more tonal options.

I decided to soup up my Stratocaster with a bare upgrade pickguard designed to control three pickups. It came with two quality Bourns pots mounted to a printed circuit board. The included Treble Bleed volume control circuit eliminates the brilliance becoming "muddier" as the volume is dialed back.

It has six mini toggle switches instead of the stock 5-way blade switch. Three of them are on-off-on to control each pickup by turning it Off or On (in either normal-phase or reverse phase.) The other three are on-on switches to put select pickups in either parallel or series circuit. The switch layout is simple and intuitive. The end result is an instrument that goes beyond the stock five pickup tones.

The solderless connectors made it a snap to wire everything up and install this upgrade. It just dropped in with no surprises. After the upgrade, I now have 35 unique pickup tones. (see the picture)

This upgrade is better than the 5-way switch because I can now do things that my Strat couldn't previously do. I can turn on each individual pickup (in normal-phase or reverse-phase) and put them in either parallel or series connection for fatter tones. I can turn on both the bridge and neck pickups to make it sound like a standard Telecaster. This also gives me all those Brian May (guitarist for Queen) Red Special fat pickup tones. And I can turn on all three pickups at once.

The versatility of this upgrade gives me "tone nirvana" with pickup tones I always wanted (but could never get from stock guitars.) I am pleased with the new voices this upgraded guitar gives me. These upgrades turn even the cheapest axe into a Tone Tyrannosaurus.

Whereas it's good to see people doing creative things with instruments, I note that you've posted two separate topics with similar headings and written in a similar style which could be interpreted as a form of self-promotion for your services and/or business.

This is a friendly heads-up that promotional posts are not in the spirit of this forum, rather it is a place for discussion and knowledge sharing amongst users. Promotional posts should be made in the New Products & Industry News forum, which is where your first post was relocated on a previous occasion.

As the two posts you just made are borderline, and may be useful to other members I have left them here. However, please do not post multiple threads much along the same lines just with different guitars, else they will be evaluated by the moderator team and either deleted or relocated to the New Products & Industry News forum.

As the two topics are essentially the same I thought it would be best to merge them to avoid duplication, comments relevant to one are equally relevant to the other. And as that has made one of Eddy's posts redundant, I've taken the liberty of removing that post to avoid confusion.

I definitely took this as an ad for the PCBs. Thanks for the great moderation work Eddy and Andy

This mod has been around for decades. The only thing that is different here is that it's being sold on a pre-made scratch plate/control plate.

On paper you get lots of extra sounds. However, in the real world many are either functionally identical to each other, very similar to other sounds, or not particularly useful additions.

Further more, there are significant disadvantages caused by multiple toggle switches in place of the traditional 3, 4, & 5 way switches.

Firstly, switching between sounds is fiddly and time consuming with multiple mini-toggle switches, especially if the change involves switching pick-ups together with swapping phase and or series/parallel. Not the sort of thing you can do between verse and chorus. In the example of the Telecaster, everything the replacement control plate offers can be simply achieved with a standard switched control plate and a pair of push pull pots in a form far easier to navigate. And many Telecaster neck pick-ups will not work with that control plate without a modification.

The second disadvantage is that you make a number of very useful tone circuit mods much harder to achieve, and (in the case of the Stratocaster) lose some useful functionality because everything goes through a single tone pot. You lose the option to switch quickly between the bridge pick-up (with no tone control as standard or it's own tone control with a common mod) and the middle/neck pick-up with a different tone pot, which can be very effective. There are also a range of very effective wiring mods that involve adding resistors/capacitors to pick-ups to change the actual sound and transfer character of the pick-up and introduce different phase shifts.

People have been paying me to work on their guitars for almost 30 years now. So I've wired quite a few guitars with this style of switching and variations on the same theme. And a few weeks or months later I get paid again to remove the mods and replace them with something much more straightforward to use with some well chosen additions that actually are useful.

So enjoy experimenting with all the sounds available at your fingertips. And when you find the 3, 4, or 5 that you use regularly you should be able to get them on a standard switch (perhaps with a push-pull pot or two) all within easy reach and without accidentally getting one of the many useless combinations.

If I've followed this correctly then I think that the Tele switching options are the same as on my Baja model. The Baja uses a 4 way lever (the additional position being both pickups in series) in combination with a push switch on the volume control (I think that Fender call it S1 switching?) to flip the phase. The use of on / off switches and phase reversal on each pickup is reminiscent of Brian May's Red Special.

I can completely understand why Andy has reversed so many of these mods over the years. I’m planning a pickup change on my Patrick Eggle Berlin Pro and, when I do it, I’ll be cutting down the pickup selection options from 9 down to 3.