Because of the +ve ground of that circuit, you'd need a fully isolated PSU output to supply it if you added a PSU connection, or replaced the battery completely with a PSU input. So a make that's known to have properly isolated outputs, not a cheap PSU that just claims to have isolated outputs.

The battery +ve is connected to the normal ground connection of the guitar connection. A battery voltage is fully floating until you reference it to something in the circuit, so whilst it still outputs 9v, the +ve side is at the system 0v/ground reference and the -ve side of the battery is at -9v with respect to the signal ground. So it's different from the normal +ve =+9v, -ve =0v that you normally get in a pedal.

A fully-isolated PSU's output voltage will also 'float' like a battery can, but if you try using the circuit with a non-isolated PSU, it will short out.

Just make sure the -ve side of the battery doesn't come into contact with the ground or enclosure casing, as it's normally the +ve side you worry about.

Current draw on a circuit like this is very low though, so you won't have to change a battery very often, so probably safest to keep it battery only. With a largish enclosure, you could even mount a battery draw on the top if you wanted to permanently install it on a pedalboard.

SecretSam wrote:It seems to use TRS sockets, which I don't really understand ....

You're talking about this circuit : 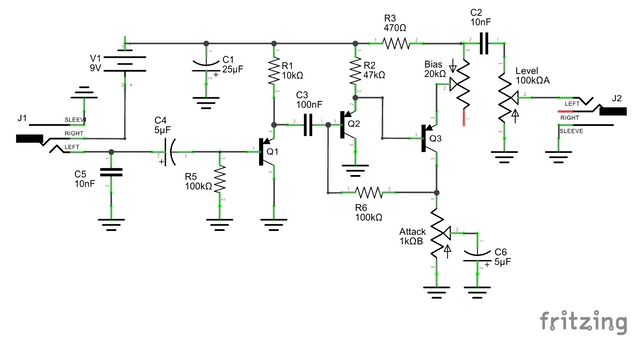 The TRS at the input is acting as a switch -- when you plug a lead in it connects the battery. The TRS on the output is completely pointless.

Just to make it completely clear for Sam or anyone else, the 'switch' action' relies on plugging a TS instrument cable into the TRS input socket, whereupon the plug sleeve shorts the ring and sleeve terminals, thus connecting the battery +ve terminal to the unit's ground and firing up the circuitry.

Plugging in a TRS plug to the input will result in all manner of non-functional/damaging scenarios!

I imagine the use of a TRS socket at the output was just to simplify the component ordering -- two identical sockets instead of one TS and one TRS.

And in 99.9% of all other cases, it's the battery negative connection that is wired to the R(ring) of the TRS socket, so that a TS jack completes the battery circuit via connection through its sleeve when plugged in.

Of course -- it's always grounding the battery, so connects whichever battery terminal goes to ground... The use of vintage Germanium PNPs in this circuit makes it a 'positive earth' design which is the reverse of most modern circuitry.

Thanks Hugh and Wonks.

It sounds like a foot switch needs to be added into the circuit, and I can go with one TRS only.

Hm. I am starting to wonder whether my random circuit choice was the right one.

That claims to be the original schematic.

It also recommends adding a diode for 'reverse polarity protection'. I can just about remember enough school physics to get how that works.

Still no footswitch in the circuit, though. Perhaps that bit is too obvious to need inclusion? For proper electronic geezers, I mean.

Note that the 20k pot is a small trimpot, not a standard guitar/effect unit pot.

It sounds like a foot switch needs to be added into the circuit, and I can go with one TRS only.

Hm. I am starting to wonder whether my random circuit choice was the right one.

You won't find a 20k standard pot these days, they are all 22k, same as 50k dropped down to 47k. They now all follow the resistor E6 series. This doesn't make any practical difference.

Of course, I forget about guitar controls, in which case all bets are off, you find some really bizarre values, but prolly none below about 100k

This geezer put the bias control on the front. Sounds interesting.

The 20k trimpot is where if you did want to make it adjustable with a case-mounted pot (rather than an internal trim pot), you'd be best finding out what range of resistance is useable, and pick a fixed resistor (or resistors) and pot wired in series accordingly. E.g. if you find that 11k to 16k works, with 14k being the resistance that gives you the standard circuit design gain value, then a 10k resistor in series with a 1k resistor and a 5k pot will give you 11k fixed resistance and an adjustment range between 11k and 16k with the pot. Your normal bias value will then be at the 12 o'clock position. You can always mark the 'normal' bias position on the case if it's not right in the middle.

On the other hand If you just went for a 22k pot that people could play with, the over 3/4 of the pot's travel would be outside the useable bias range.

You'll always want a fixed resistor in series with any external bias pot, otherwise you could easily set the resistance to zero and damage the transistor. I have no idea what the minimum bias resistance should be though.

Note that on those diagrams (just in case you weren't aware and for the benefit of others), the A at the end indicates an audio/log taper and B a linear taper pot. E.g. 100KA (sic) is a 100k ohm audio taper pot (the symbol for kilo is a small 'k', big 'K' is the symbol for kelvin).

But be aware that they are drawn for negative battery terminal connection switching on the input jack, and the TB circuit uses the positive battery connection taken to ground instead.

This geezer put the bias control on the front. Sounds interesting.

I see. Oh well, at the risk of sparking the great bias controversy I'll have a go.

Transistors don't do anything below 0.7 Volts

So bias is essential to switch a transistor on. The right place to bias a transistor is ... in the middle, and if you do that it's a class A amp. Technically the transistors in the Tonebender are operating in class A (when they're biased correctly) even though they are clipping the signal.

In the video there are examples of the guitar sound cutting out at low levels which is due to the bias being too low. The presenter's favourite bias setting is 5.5V (actually -5.5V in the PNP setup) and that's about the middle. "Wait," I hear you say "half of nine is four and a half". Correct, but you have to take off the 0.7 Volts. The diode drop as engineers call it.

It is possible to make the bias independent of transistor gain but the designers of the Tonebender were not so inclined, possibly because it requires four resistors per transistor. This is why the trimpots are suggested to compensate for the fact that in the Tonebender bias network the bias changes depending on the gain of the transistor.

So you have a few options :

merlyn wrote:So you have a few options :

What a wonderfully informative reply merlyn!

merlyn wrote:Transistors don't do anything below 0.7 Volts

Ummm. That only applies to silicon transistors. Germanium ones start to conduct at around 0.15V, and unlike silicon it's not a distinct switch on. Depending on conditions its gain can slowly develop between that and about 0.4V

Here’s a breakdown of a Fuzz Face pedal and how it works. https://www.electrosmash.com/fuzz-face
Unfortunately there’s no Tone Bender on the site, but the Fuzz Face one does cover a lot of the circuit principles that you get on a Tone Bender, including germanium transistor considerations.