As a (bad) multi-instrumentalist whose least awful instrument is bass, I would say that many guitarists, especially those in the rock/metal genres have too many bass frequencies in their sound already, and anything that goes some way to taming them and allowing the instruments which should be operating in those frequencies, room to breath should be seen as a good thing.

What sounds good playing solo in your bedroom does not necessarily sound good as part of a band or arrangement.

Most of the distortion circuit schematics I’ve seen so far have a DC blocking cap that, in conjunction with tan anti-popping pull-down resistor of between 1 and 2.2megs, almost always has a frequency knee of 7.2Hz, so it won’t be that rolling off the bass end of the guitar.

It will almost certainly be the pre-gain stage filtering that’s doing the low-end ‘removal’.

On an older pedal, or a self-build, that uses discrete components, then it’s relatively easy to try out a few different component values, but not at all easy on a modern pedal with surface mount components.

jdom84 wrote:I mean I thought it should not have any hum if its a decent grounded set up surely..

The hum will mainly come from the guitar pickups. Even humbuckers will pick up some hum. Because the two coils are physically displaced, even though it's by just a very small distance, they'll pick up the noise waves at very slightly different phase angles, so hum cancellation isn't 100%. Active pickups are quieter, but even then, its hard for them to not pick up any hum at all.

On a clean guitar signal, the hum may be so low in level as to be unnoticeable. But it's because a distortion pedal can apply so much gain, that the hum still needs to be taken into account. And just because your guitar may be almost hum-free doesn't mean that someone else's is as quiet, so the pedal designer needs to assume a fairly bad worse case. 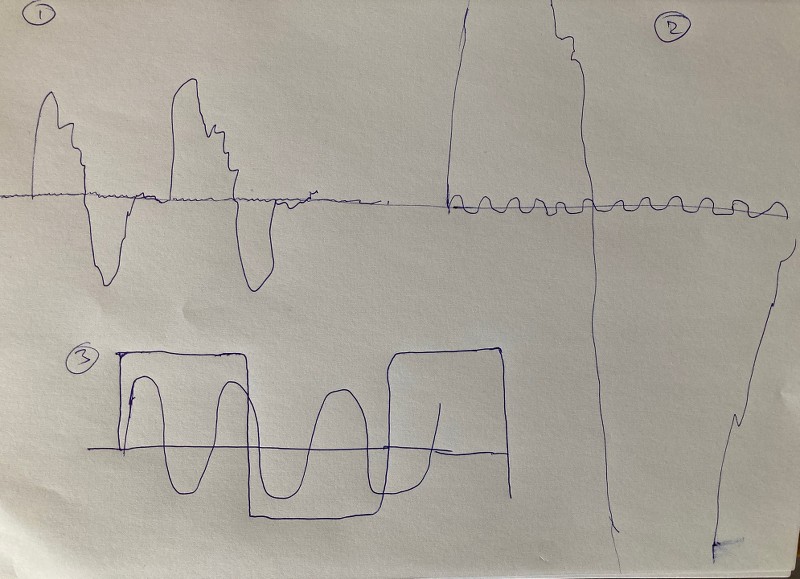 In the above crude sketch, fig 1. is supposed to be a guitar signal with a low level of hum .

In fig 2, a reasonable amount of gain has been applied, making the both the guitar signal and the hum signal much larger in amplitude. The hum and the signal level are still in the same ratio as before though.

In fig.3, the amplified signal has been passed through the diode clipping stage. This cuts the signal peaks off and limits them to the diodes forward voltage value (about ±0.7v for silicone diodes). So although the signal peaks were a lot greater than the hum, now they've been clipped and limited to a value that's only just greater than the hum level. Now the hum is very noticeable and it will interfere with the guitar signal.

That's all very simplified, and it may well be that in some instances that you'd still not notice the level of hum, but in many situations, you most definitely would. So that's where the high pass filter comes in, reducing the hum level (but also the overall amount of low-end in the guitar signal).

This reduced low end is generally seen as beneficial, so is accepted by most, but there are times (as when you play solo) when more low-end would be welcome to the player.

yeah sorry its a tiny pedal so that would be impossible...

I will sell it and get another pedal with more tone controll I guess..

Are behringer pedal really awfiul? I was looking at the pink distortion pedal..

Lots of bass in a high gain guitar sound may sound fine when it’s on its own, but in a band situation it can really mess things up and it all becomes muddy. You need to leave room for the bass and kick to be heard.

There will be pedals that leave the bass pretty much untouched, but you need to find them. Avoid pedals with a single tone control, but look for ones with at least bass and treble tone controls as any fixed bass roll off is then likely to be minimal and left to the bass tone control.

But do think about how your guitar sounds in a band or track context. Most instruments in a mix need ‘sculpting’ with EQ to give each one some space to be heard, and rolling off the bass end on guitars is pretty standard. I know a lot of low thump to the guitar sounds great on its own, but in a typical band, it’s not a good idea.

I played bass in a band with a guitarist who a one time used a modeller into a small powered speaker (brilliant) and then got himself a new amp and had what he thought was a rich full tone.

I could not longer clearly hear my bass parts and the resultant low end mess eventually resulted in me no longer wanting to be part of the band as we couldn't seem to find a compromise.

For guitar duties I use a 1x10 combo and many sound engineers have commented on how easy it is to mix the guitar sound into the rest of the band. So I would also advise being bold, loud, soaring and powerful, but don't trample all over the sonic space of other instruments.

jdom84 wrote:yeah sorry its a tiny pedal so that would be impossible...

I will sell it and get another pedal with more tone controll I guess..

Are behringer pedal really awfiul? I was looking at the pink distortion pedal..

If you like the everything else about your pedal, then it might be worth considering getting a graphic eq to put in the chain, they can solve many problems, can act as a level booster and tonal change switch at the same time and can be roped into many problem solving duties on other instruments and or PA if things are going a bit wrong.

The Behringer pedals are generally OK, (some are really good and a few are really bad) but with other Chinese-made pedals coming in at similar or lower prices and of what I consider to be better quality, these days I'd buy from another manufacturer if I could.

Finding a really cheap pedal with a lot of low end isn't easy, as most are based on old classic designs like the Tube Screamer, Boss DS-1, ProCo Rat, Marshall Guvnor, MXR distortion+ etc, and all of those have a reduced bass end.

You'll probably have more luck with some of the more boutique pedal brands, but even so, I doubt that any distortion pedal using hard diode clipping forgoes all bass roll-off, as the electronic components still react in the same way.

I got one of these has some useful tone controls on

OP might also like to look for a Blackstar HT Dist' pedal. This has an input turnover frequency of 7Hz and in fact does not employ a "diode clipper" almost all of the distortion comes from the double Triode.
If there is still not enough bass any good guitar amp tech should be able to mod the pedal (but don't tell Bruce!)

How is it actually powered? Mains, or via an inverter.

How is it actually powered? Mains, or via an inverter.

If you are referring to the HT-Dist Will the pedal range has an on board 'diode pump' chip and power MOSFET producing 300V . The pedal uses a 22V SMPSU line lump, a necessity that has I think held it back slightly?