Whatever happened to the Shiverware Rainboard...? That thing looked amazing.

I've previously coveted isomorphic keyboards like the Starr Labs Microzone in an "oh, that looks cool" kind of way, but I've never really grasped what it meant, until...

...I work part time to maintain a care home for unwanted Kickstarter gadgets, and we recently took in a small Dualo du-touch.

The penny finally dropped when I realised that chords, scales, intervals, could be transferred fully intact anywhere on the layout. Genius. I love it.

Only problem now is that I'm gonna have to beg, borrow or steal to get a bigger one. :(

The Rainboard does look cool. I’m very happy with my Linnstrument 128... especially because I’m able to use the same pattern for every scale.

..and I who was already looking forward to a pleasant discussion about geometry and algebraic structures... :bouncy:

resistorman wrote:The Rainboard does look cool. I’m very happy with my Linnstrument 128... especially because I’m able to use the same pattern for every scale.

Oh damn, yeah, I'm after one of those. (Given the price of the Linnstrument and Haken Continuum, I was interested to see that the Sensel Morph recently acquired MPE. There's also the Madrona Soundplane if you can get hold of one, and that about wraps it up for that kind of controller.)

Not having years of ingrained keyboard training to get in the way, I am loving my Roli Rise 25. And now doesn't this Linnstrument look interesting. Cripes - time to start saving up again! 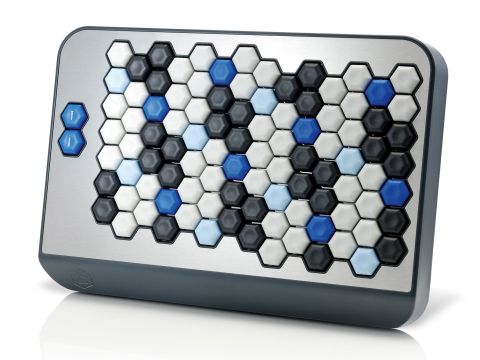 Unfortunately C-thru Music no longer make these and they're not easy to find, leaving the Opal as the only game in town for this "Harmonic Table" concept. (Beautifully made but with a price tag to match.) 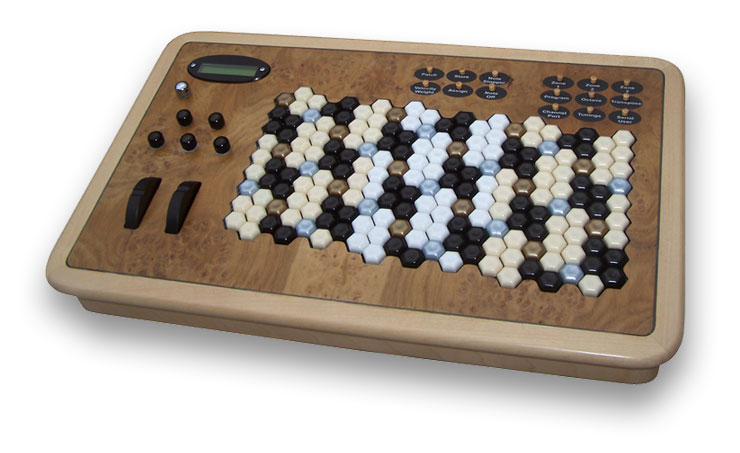 BJG145 wrote:...leaving the Opal as the only game in town for this "Harmonic Table" concept. (Beautifully made but with a price tag to match.)

Now that is truly beautiful, and almost steampunk to boot! 8-) Apparently this little beauty is called a Hohner Harmonetta, and employs the same Harmonic Table layout as the Axis 49 above.

I like to keep this thread updated with the latest topical Isomorphic instruments I never came across before, so here's a Hyve I just noticed on eBay.

It's a mini capacitive-touch synth originally launched on Kickstarter with a petite but cool hexagonal layout above the keyboard. If you have very small fingers.

(In other isomorphic news...Dualo folded without ever producing the larger Du-touch L funded on Kickstarter...to the wrath of the punters who lost their money. But some of the original team have recently re-emerged as Intuitive Instruments to keep the dream alive, so at least people can get their smaller Du-touch S serviced if needs be. I need to get mine fixed as it happens, but the last instrument I sent to France for repair disappeared without trace and I haven't quite forgiven the French yet, so...we'll see.)

...continuing the button-layout theme, I love the Elka Concorde range I just discovered via this listing for a baby Concorde 90 on eBay. ...but I think I'll save myself for the bonkers steampunk war room fantasy of the Concorde 902.

Some of these are truly stunning! Even if they didn't make a sound I'd still love to own one.

It's basically a flattened out accordion :D

What about this then, (turned up in a search for button accordion images)

BJG145 wrote:...but I think I'll save myself for the bonkers steampunk war room fantasy of the Concorde 902.

Which button launches the missiles? I really think that should be clearly marked. You know, for health and safety...