I've been playing with my new Model D and comparing it to my real MiniMoog. As far as I can match the controls on the two synths (which is tougher than you might imagine)...

Actually it improves on the real Mini, with the extra mod LFO, the additional mod/filter options and the CV sockets. So far the tuning is more consistent too, which is no bad thing. To my surprise the controls even feel expensively smooth and silky. All this for 300 quid!

The only significant deviation from my Mini is when using the old feedback loop trick to drive the filter. The Model D sounds nothing like my Mini when doing this. Then again, I use the 'Low' output for my feedback loop, whereas many people use the 'High' output, or the headphone jack... I don't care enough to pursue and rationalise this difference.

The only minus so far: I had to hunt down a sys-ex utility to set the Model D's response characteristics, because I couldn't get it to work with the suggested sys-ex string when I created it in Cubase. With the utility, and using USB instead of the MIDI port, I successfully set the pitch bend range to my preferred 2 semis. If that's the worst trouble I'm going to get for my 300 quid I'll take it.

Sounds great - thanks for the low down!

How are the contols? is it a bit cramped or OK?

The controls are fine. Something about their size does reduce the visceral satisfaction of tweaking, for me at least, but they are not so small that setting them carefully is a problem. I wouldn't describe them as 'cramped', and I haven't found myself accidentally moving other controls to the sides, like I have with the tiny Rolands or Korgs.

If you know your way around a Mini then it's all pretty much second nature, though the totally new controls will take a few second glances until they become familiar. The 'black switches on a black background' in the controller area are a strange choice -- maybe they thought that yellow, lime or violet would look too toy-ish? If anyone can tell me where I can buy some replacement switch tops I'd be pleased to know -- that's a mod that's high on my list.

I've seen suggestions to nut the pots onto the panel, and this is something that I'd seriously consider -- just to give the thing an improved chance of longevity.

I'm scratching my head to consider why anyone *wouldn't* want one of these, other than if they have some kind of deep Moog revulsion. Of course, I'll always carp about an external PSU, but I can forgive it this for the price -- something I find utterly *unforgivable* on a three grand plus remake...

... and here comes my GAS again. Thanks Elf.

If the Model D can please you Elf, it must be AMAZING!! :beamup: :thumbup:

The Elf wrote:The 'black switches on a black background' in the controller area are a strange choice - maybe they thought that yellow, lime or violet would look too toy-ish? If anyone can tell me where I can buy some replacement switch tops I'd be pleased to know - that's a mod that's high on my list. 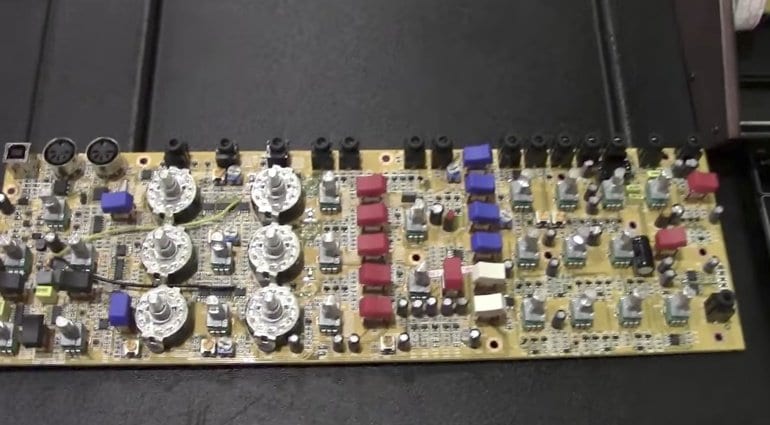 Are you sure they have switch tops Elf? They look to me (from photos anyway) like rocker switches, in which case the switch top is probably an integral part of the switch and would therefore need the switches themselves un-soldering from the circuit board and replacing with differently coloured alternatives.

As I understand it the switches are actually simple toggles and Behringer have just added a press-on plastic cap to them.

Admittedly this is based on a prototype...

Martin Walker wrote:If the Model D can please you Elf, it must be AMAZING!! :beamup: :thumbup:

:lol: If it was 500 quid I would begin to be more critical of the external PSU, the diminutive size and the minijacks. For this price, and for how good it sounds (which is the most important criterion), I can overlook any such compromises.

MIDI pitch bend messages only work between a MIDI note on and note off. For most this probably won't matter so much, but it's a right old pain for me.

Thanks for your insights, this sounds like a great addition to the Mother-32. My most recent need was for poly synths but this may be my next mono purchase!

Came on here to check my keyboard stand thread......and looks like I’m gonna be another £300 light - thanks Elf :bouncy:

Synapse Audio The Legend is very good and makes me think seriously whether its £300 on another synth or something else that a cpu cant emulate. I would love to know what The Elf thought about The Legend.

Legend is easily the best virtual MiniMoog emulator so far IMO. If I can't use hardware I'd choose Legend every time.

But 300 quid for something that's essentially a 'genuine', hardware Mini? It's maybe not quite down at 'impulse buy' levels, but it's not far off.

Thanks The Elf for your thoughts, much appreciated. Forgive me but I have to ask this: as you have a MiniMoog and said about the Model D "I'm scratching my head to consider why anyone *wouldn't* want one of these" and also "Not *like* a MiniMoog. Not *similar* to a MiniMoog. It's a MiniMoog." and also Martin Walker said about you "If the Model D can please you Elf, it must be AMAZING!!" (high praise indeed from another legend) What do you say about the sound of SYNAPSE AUDIO The Legend when comparing it to a MiniMoog? is it a MiniMoog too?