Print view
For fans of synths, pianos or keyboard instruments of any sort.
Post a reply
8 posts • Page 1 of 1

I’ve set up a computer and speakers in our soggy basement, just to run Hauptwerk, the pipe organ software.
I’m really getting into it, the basement is below our dinning room, and I imagine myself coming up through the floor entertaining our guests like Reginald Dixon :D
However, I’m having a few issues with Hauptwerk, I need some sort of Midi keyboard set-up that allows me to control the Great and Swell keyaboards separately, ideally separate "Manuals" a pedal board would be good too, but maybe later.
I know Roland make organ consoles, but they are a complete package, with sounds included, I just need a keyboard set-up that’s optimised for organ use, but can’t seem to find any.

How practical are you, Tony?
It's not a great photo (borrowed from another thread - can grab more detailed ones when I'm back home after Christmas if useful) but the organ you can see in the window of this photo is a homemade version of roughly what you're looking for: 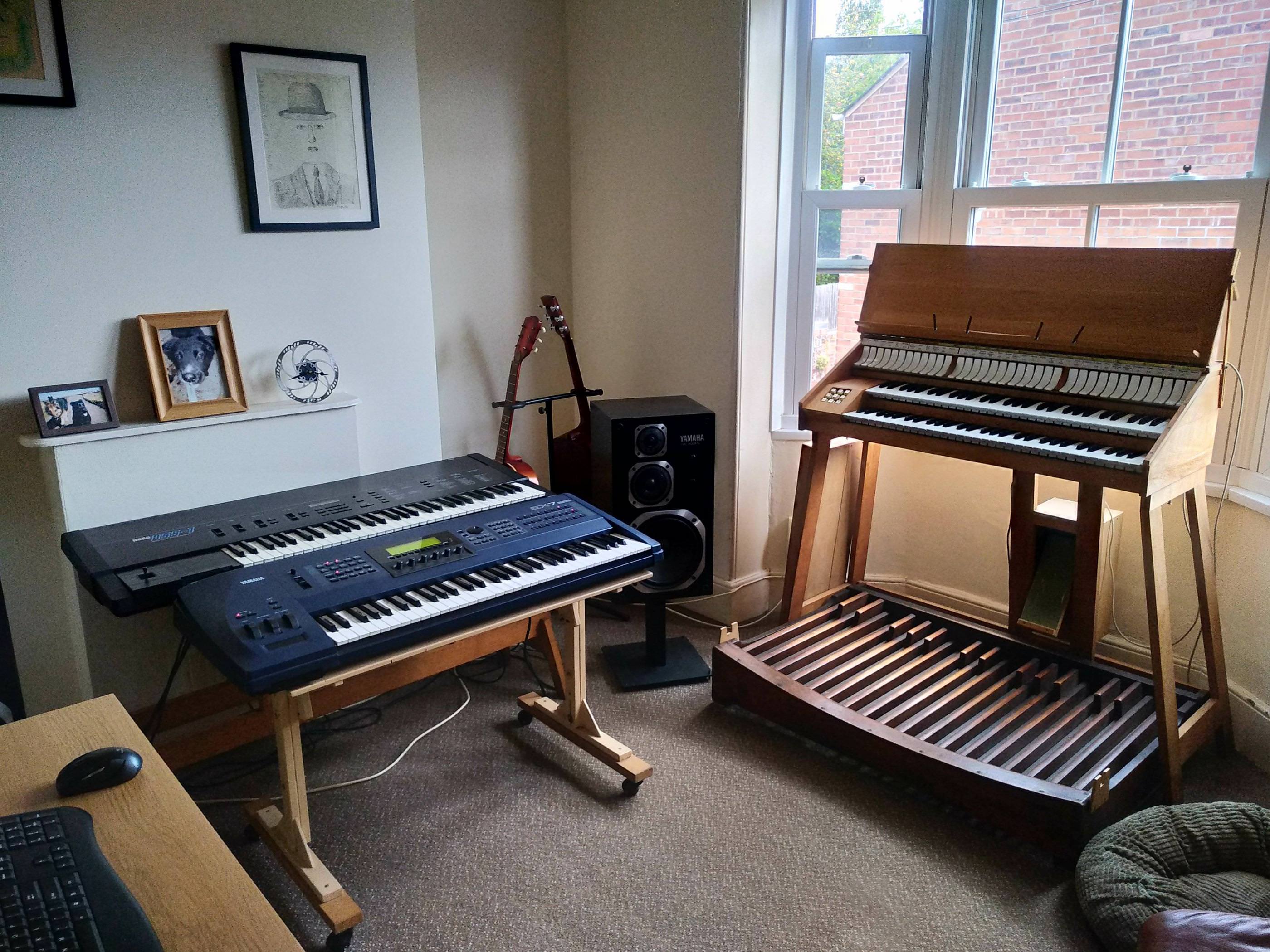 N.B. I can take no credit at all for its creation - I'm just the custodian / (un?)lucky victim who inherited the project.

I still need to get around to doing a proper write-up...

That’s amazing! Yamaha NS1000's too, absolute heaven!
I don’t think I could manage anything like that, but yes, I may end up buying a console, I’m using the free version of Hauptwerk so I haven’t invested anything.
That article looks interesting!
Can I just say that your taste in equipment is impeccable.

I wrote a big long constructive answer... but when I finished writing it I thought I'd give it to someone else to read...

Doepfer sell organ keyboard setups for DIY inc. bass pedals using FATAR parts plus they do contact to midi interfaces, perfect for making a stops controller. Also YAMAHA do still sell organs and have a portable one which whilst having internal sounds should be compact/light enough not to worry Or CRUMAR do controllers for tonewheel organs that would at least give you two manuals.

Hugh Robjohns wrote:I wrote a big long constructive answer... but when I finished writing it I thought I'd give it to someone else to read...

What is the budget?

You might find an organ for sale or being given away, even the 20 year old ones are likely to have MIDI.

Some comments on keyboards and MIDI...

For people for whom money is no object then perhaps Mixtuur can help.

Hugh Robjohns wrote:The least expensive way is just to buy a couple of cheap MIDI controller keyboards and a small MIDI pedalboard... which will let you play each division independently, but it will be a bodge.

There are plenty of companies that sell proper organ manuals, pedal-boards, stop buttons and even complete console carcasses specifically for use with Hauptwerk systems. A google search will reveal them very easily. Obviously, a degree of DIY construction is required, depending on what options you choose, and it ain't going to be cheap.

Another option -- and the one I used -- is to buy an old second-hand electronic church organ console and modify that. They can often be found for a grand or two from most of the current electronic church organ re-sellers who take them as part-ex, and they quality of woodwork is usually extremely good, even if the internal sounds are a bit dated.... In my case, the organ is 15 years old, but in remarkably good nick because it was built to very high standards, and the company even came out and re-voiced it for me in it's new home for free... so although it doesn't sound as good as the Hauptwerk sampled organs, it's actually very playable as a practice instrument and I don't always have to fire up the computer and speakers!

Thankfully, most of these redundant organs have MIDI outputs from the keyboards/pedals/ expression pedals so can be used directly straight away... but if you're into DIY you can then rebuild the stop switches etc to link that in too...

The big advantage of this approach is that you have a professionally built organ console and can be assured that all the physical dimensions and relations between keys and pedals are correct -- which is vital if you have any notions of playing real instruments for building accurate muscle memory.

The guy I bought my Eminent console from sold it to make space for his own DIY Hauptwerk theatre organ. He acquired the console woodwork from a derelict cinema in Bradford or somewhere, and then installed four new keyboards and new horseshoe stop switches. it played through eight speakers and two subs and sounded amazing as well as looking incredibly impressive! Completely filled his spare bedroom!

Thanks Hugh, I think I’ll end up "bodging" two Midi controller keyboards, I haven’t got room in the basement for a large console, and as you know, water is just a bit of a problem!
I thought I’d be able to buy a double keyboard in a nice wooden case, but it seems there aren’t any around, I’m sure I can make something suitable, and look around for a pedal board.

PS, just caught up with this thread, I’ll investigate those links.....thanks!