I was seconds from buying a Hydrasynth, before I decided I needed to double-check the power requirement. I felt sure that the keyboard had internal PSU, and the rack external (which meant I had already discounted buying the rack), but from what I'm reading I now have a horrible, horrible feeling that the keyboard is also external and my memory has tricked me (I'm probably thinking about the Novation Summit).

I can't seem to find a photo or any wording that absolutely confirms it.

I've found what I needed (but didn't want) to know. External PSU.

Not a complete show-stopper, but I'd have to get it sorted out by my magic engineer. And for that I'll need to know about the innards of the synth.

It is indeed an external PSU and a particularly flimsy one at that, sorry. As for the internals, I couldn't say off the top of my head but I've got the unit here so I'll see if I can get some pics of the internals for you.

I've also got a pizza en-route, so my next post will depend on how long both activities take combined ;)

I looked and was very happy to see a standard 12V DC 1000mA +ve pin supply requirement. These are so very easy to find these days; I think it was a very good move by ASM.

It's ridiculous that a £grand+ synth has an external PSU. Utterly ridiculous. Power cables are MUCH simpler to find than *any* PSU and much more robust. I've now seen the PSU cable for the Hydra and it wouldn't stand up to being tripped over. But we've been here many times...

Thanks, Eddy. If you can tell me how much space I have in there I'll get my guy on the case.

Good news. There is a ton of space in there. Sorting out pics now, will post them shortly.

Eddy Deegan wrote:Good news. There is a ton of space in there. Sorting out pics now, will post them shortly.

Thank you, my friend.

You have to open it upside-down. There is no space at all in the upper half directly under the control surface as that is occupied fully by the mainbord.

Underneath the mainboard, the front is occupied mainly by the keybed as you'd expect but there is a lot of space in the rear (front-to-back) half for most of the length between the end cheeks.

Here are some pics:

1) This is the inside of the synth on the opposite end to where the existing power input socket is: 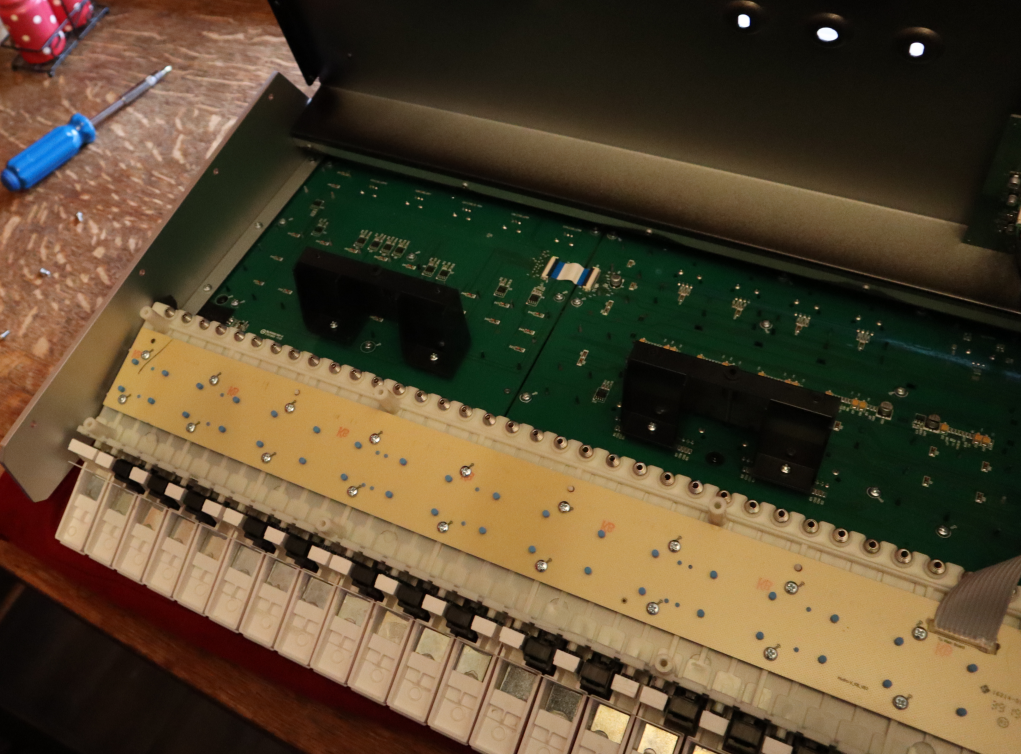 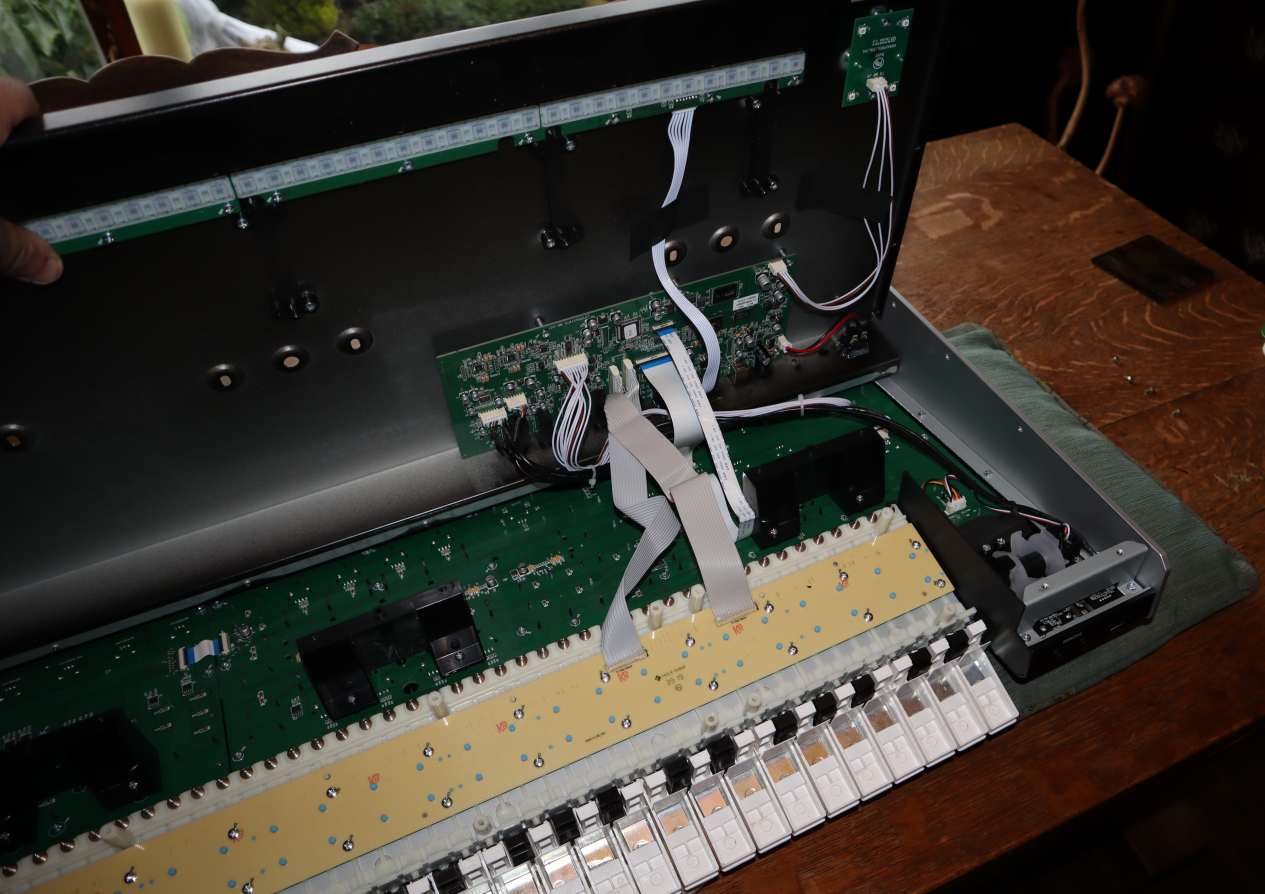 3) The factory power supply laid inside the case at the same end as pic 1 above: 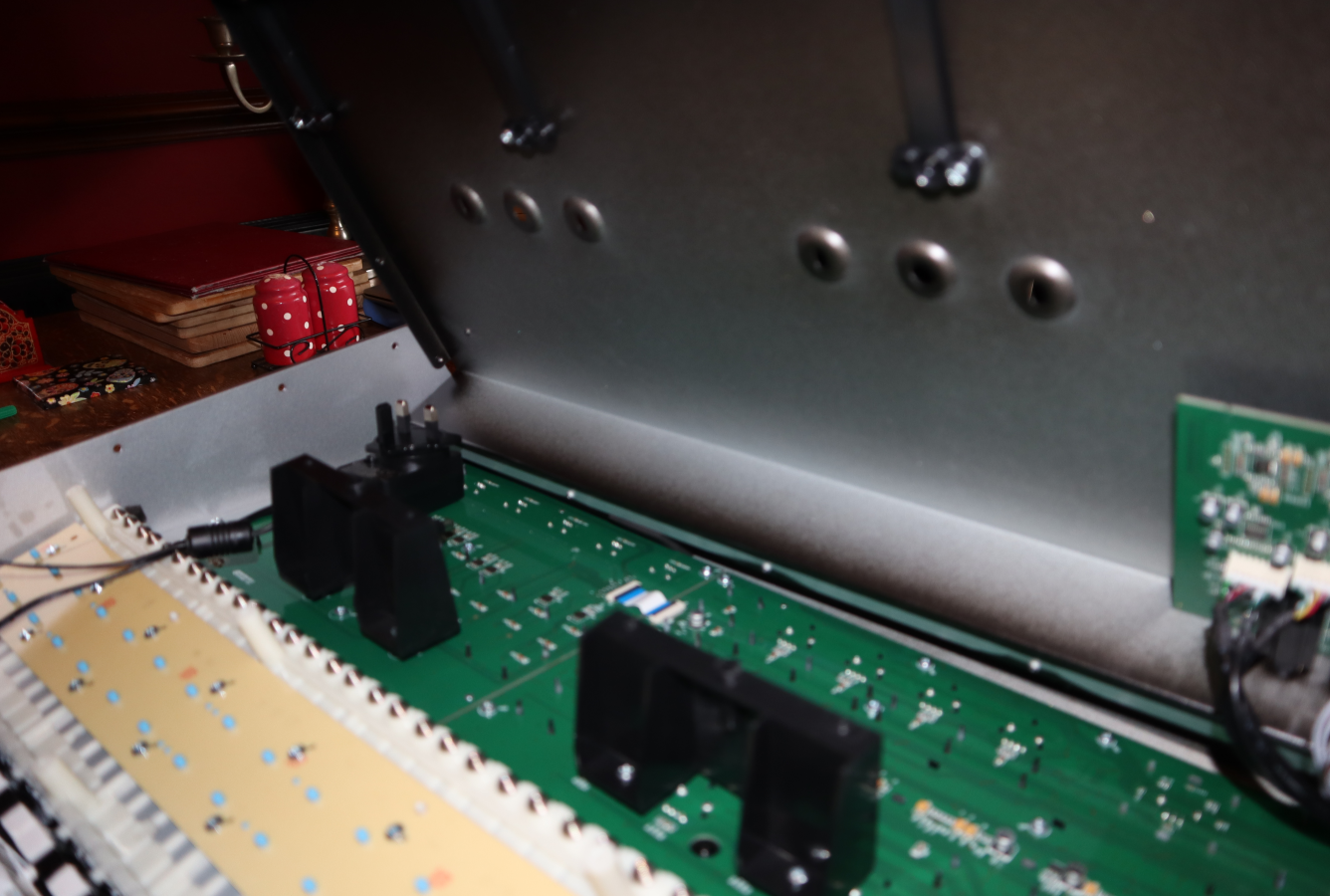 4) The factory power supply at the other end for comparison (sorry it's dark but you get the idea): 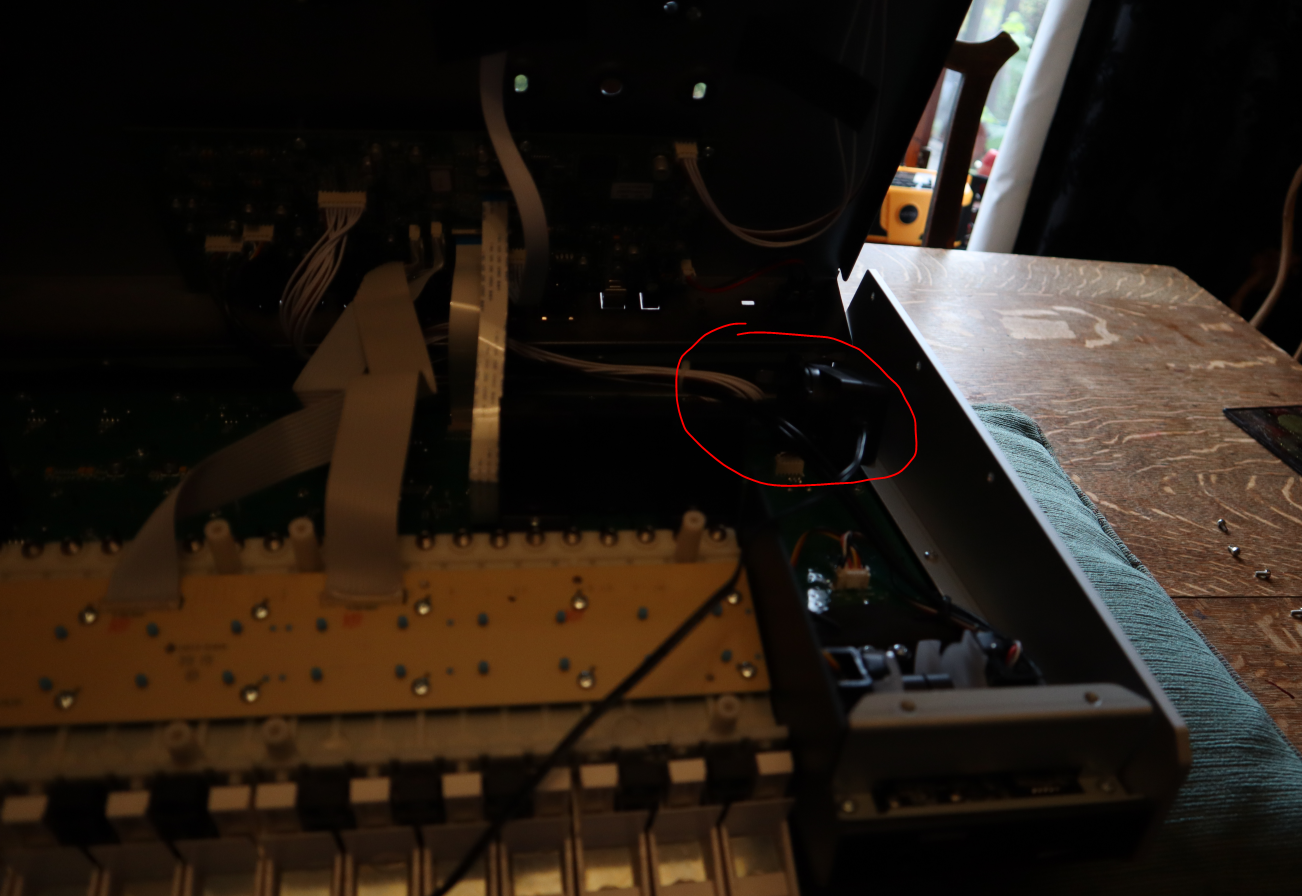 If you want anything else pic-wise, let me know. I've not screwed it together yet so can grab another image or three if I've not shown anything you need to know about.

Here's a better shot of the more occupied end (where the existing power supply comes in) albeit without the factory power supply in there, though I think you can get an idea for how much space that needs from the other pics: 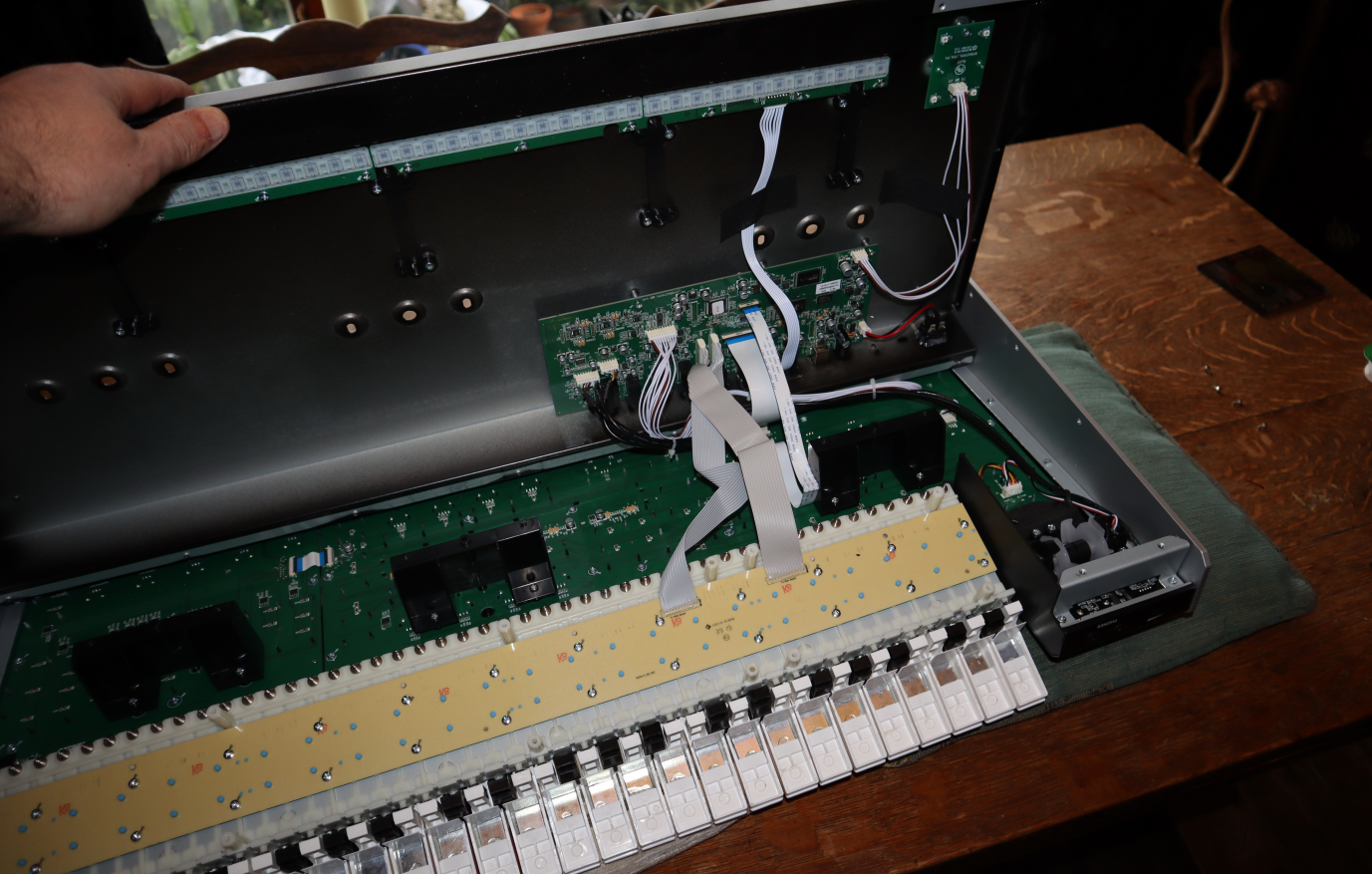 I'll forward the pics. From what I can see this should be all he needs. The fact that the PSU plug can fit in there speaks volumes.

No problem, glad to help :thumbup:

If he gets yours modified in such a way as suits you, once we're all able to travel again I'd be interested in engaging his services to do the same to mine btw, if that's an option (and assuming I don't get a rush of blood to the head and break out the dremel myself in the meantime!)

Yep, as you say, it could be a while before I can get it done, but given that I'm not gigging any time soon there's no rush.

I'll be sure to let you know, even if it's a while until then.

Absolutely no worries either way :D

After turning it upside-down you have to remove the 'big obvious' screws on the bottom which are arranged in 2 sets of 4, and an additional pair to the left as you look at it. These are self-tapping screws that engage with the plastic posts inside.

There are also three sets of 2 screws each which have built-in washers. In the middle of each pair of screws is something that looks a lot like a missing screw but isn't; it's a locating lug that engages with a hole in the base to ensure correct alignment. You can see the bottom of these sets as 3 lots of three metallic looking things on the underside of the raised case in the last picture I posted above.

There are a number of smaller screws along the back 'lip' (as you look at it upside-down) that connect the bottom of the case to the top of the case. You need to remove all of these (can't remember how many, about 8 but may be more).

You need to remove 4 screws from each end cheek as well, which are the lower set of screws when it's the right way up, but obviously the opposite when it's upside-down.

Finally, I removed a couple of mini screws on the bottom right hand end (as you look at it upside-down) located under the mod and pitch wheels. You can see where they screw in on the frame to the right of the keybed in the last pic I posted above.

When the first set of 10 large screws are removed from the bottom, the keybed is free-floating inside the case and will tend to slide out towards you when you take the bottom cover off so care should be taken on that front.

Putting it all back together again wasn't too hard, just a bit of gentle nudging to align the keybed to the required screwholes again, and also to ensure the locating lugs I mentioned before are correctly engaged in the holes in the case that accomodate them.

In short, no nasty surprises but as the main screws are self-tapping I'd be wary of taking it apart more than a couple of times.

I should have taken a picture to illustrate the above really but it's together again, back where it lives and tested now! No tech worthy of the name should have a problem, just be careful of the floating keybed once the main screws are removed.

I'd be rather inclined to mount the replacement PSU and mains socket at the opposite end of the back panel, so the mains is as far from the I/O stuff as possible.

I'd agree. I just realised I didn't get a pic of the backplate, which does have various I/O on it, as it was obscured by the metal of the cover I was holding in the air.

That said, all the backplate I/O is at the end of the synth with the little daughterboard thing, and the emptier end as shown in the first pic is devoid of any sockets or other connectivity on the back panel so this shouldn't be a problem at all :thumbup: