DAY 14. When I think of 'modular music', this is the kind of thing that comes to mind: strangely musical, randomised elements, and someplace between composed and improvised.

This is a random gate patch that was harder to get sounding musical than I would have thought, but maybe that's the point of it? A Euclidean pattern generator is creating the notes, constrained by a quantizer, and then goes its merry way into the SEM filter, which is modulated by an attenuated LFO. The EG is being triggered via the same Euclidean generator, and then I just started turning knobs. 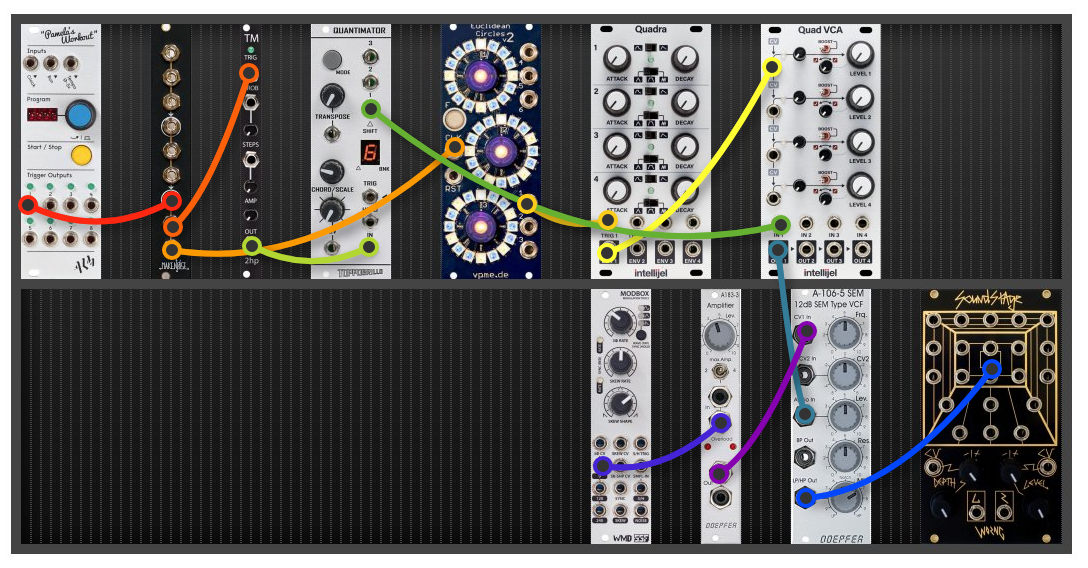 To me, this type of pattern exploration is one of the biggest strengths of modular - tedious to write/play in note by note as a composer, but wonderfully inspiring in the context of a soundtrack, and easily tweakable for real time performance once the patch has been initially set up.

Martin Walker wrote:
To me, this type of pattern exploration is one of the biggest strengths of modular - tedious to write/play in note by note as a composer, but wonderfully inspiring in the context of a soundtrack, and easily tweakable for real time performance once the patch has been initially set up.

Agreed! Halfway through this self-imposed course of study and it’s been pretty amazing. I’ve always had a notion of what ‘modular music’ sounds like to me but harboured doubts in my ability to write it, or have the necessary discipline and imagination to complete something using the modular as the main instrument.

The modular is the first instrument I’ve come across (ESPECIALLY the Subharmonicon) that defies being just dropped into a song.

The context of mastery with this instrument defies common experience and expectations which is probably why it’s so closely associated with experimental music and performance art. I also think it’s why so many people default to techno on the modular, it’s some way to make sense of the chaos.

Somewhat unrelated, but I can’t help thinking is making a creative feedback loop, is my recent decision to learn the Asian game of Go. I bought a board and stones last week and my family has been playing nonstop. There is an abstractness [sic] to the game that makes it infuriating to play for some people but I’ve found it to be a powerful right-brain recharge source!

DAY 15 IS HERE! Halfway through this deep dive and still loving it!

Don't have time to go into details right now, they will follow later. Have a listen and see if you can figure out what's going on! :)

Ben Asaro wrote:Have a listen and see if you can figure out what's going on!

"Happy to" and "not a chance" respectively! :D

Well, luckily, I just so happened to have finished the patch diagram! 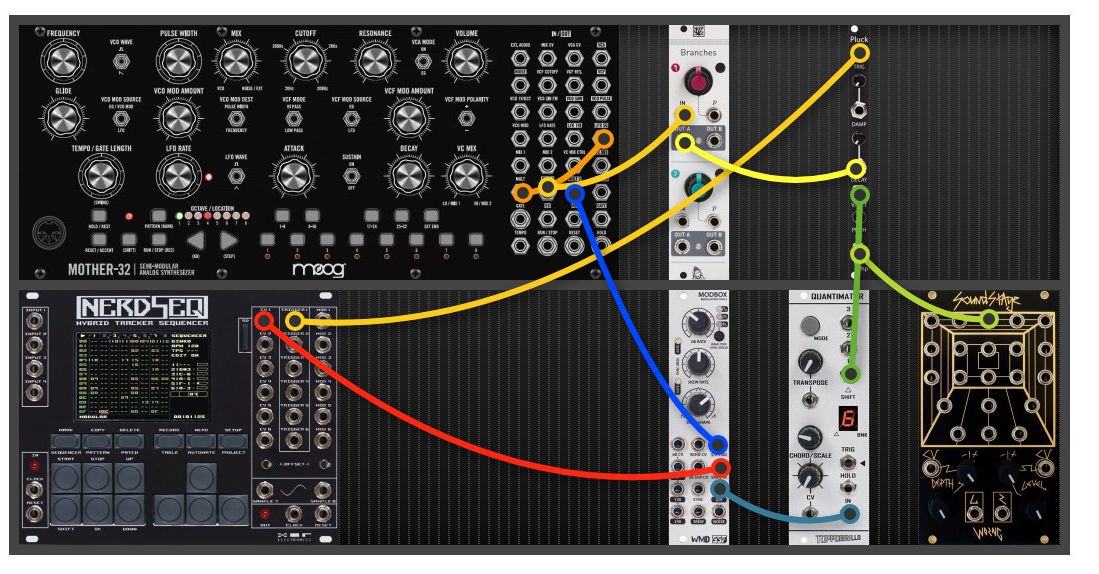 I really like this patch idea, which is based on the patch found in Patch & Tweak, page 238. It's a very simple patch that has potential for a lot of melodic possibilities. I took a 16-note sequence and ran it into a sample & hold. The sample & hold is triggered by a square wave LFO at a different tempo than the sequence itself. Since it's sampling the notes at different points, you can force it to pitch using a quantizer. I also added some random decay from Branches to add some movement to the pattern.

Another winner in the 'it could only really be done in the modular world' scenario Ben! :thumbup:

I'm beginning to realise that it's probably more constructive to start a track with a modular patch and then build on it rather than attempt use a modular to add to an existing track.

(bit slow, aren't I? answers on a postcard please to the usual address ;) )

If you’re slow then I’ve been going backwards because I am just coming to grips with the same realization. :)

My approach with the modular has, up until now, been: sophisticated sequencer, lots of subtractive voices, proceed until I hit a wall. I am now seeing that it’s far better to start small and allow the instrument to do what it does best, allowing just enough human interaction to coax it along or keep it from descending into chaos.

I am still not entirely sure how my first modular compositions will turn out after I come out from the other side of this. At times I think, well, if this is it, then I may have wasted $7,000 and a lot of hours ... but I have a glimmer of hope in brief moments of each patch, if I can connect those best bits together and put my own personal stamp on it, I may walk away with something I didn’t expect but would be totally incapable of composing from the start.

Day 16. Today's patch is a dreamy, Serge-inspired patch that uses just a handful of modules: four VCOs tuned to a minor 7 chord are fed into 4 VCAs; the VCAs are opened via non-synchronous LFOs. I then improvised a little lead over top using the Mother-32. 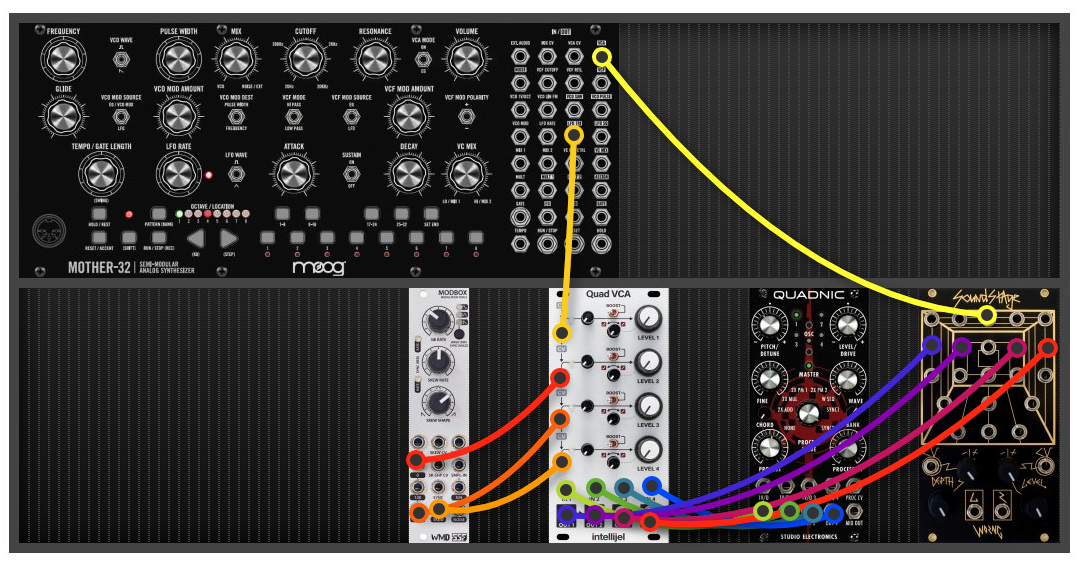 I'll admit, this patch is very close to something I would actually use. As I've been going through this deep dive, it has highlighted what, to me, is an Achilles heel situation with the Subharmonicon -- it's inability to get external CV utilities into the instrument.

DAY 17. Not only a very cool patch today, but I *think* the kernel of an idea! :D Going to put it on the back burner for now, but I like the note choice very much.

Anyway, this is a random gates variation, and one that I see with a LOT of potential! The execution is quite simple but as you adjust the filter cutoff and EG parameters, the melody evolves and morphs whilst still playing the same 4 notes.

This patch takes the gate output from the sequencer and gets randomized from by Branches into the VCA and VCF respectively via two EGs. Since they are not always triggering at the same time, the melody fades in and out in a rather ghostly way. I added autopanning from the Disting to add some movement. It ends with all of the parameters turned down to their minimal settings. 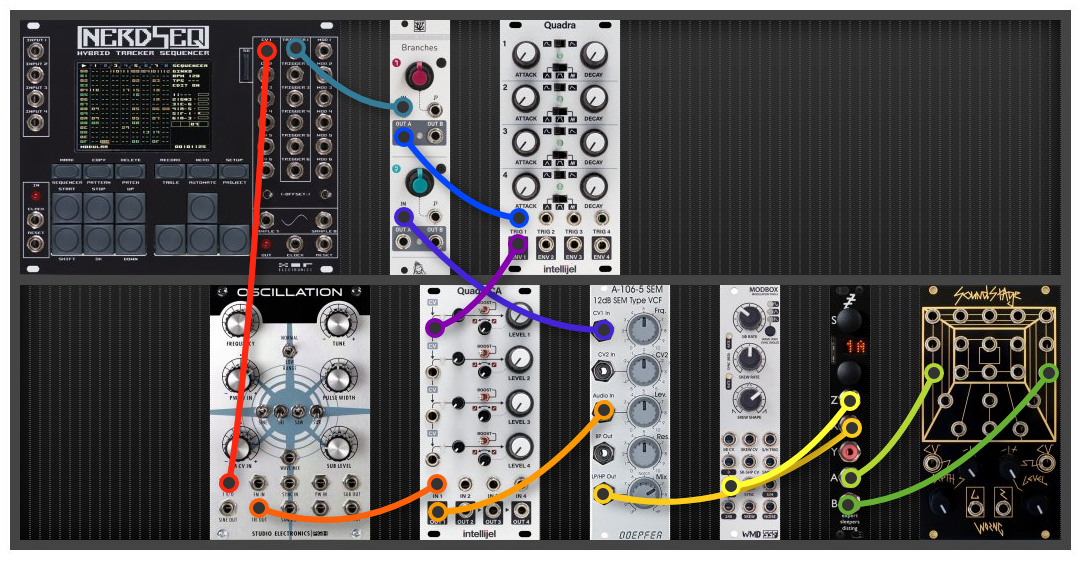 DAY 18. This is a Steve Reich inspired patch: two voices playing the identical part, and one is shifted slightly in and out of time. I added an auto panner to give the "phase" voice some motion and add to the dreaminess. 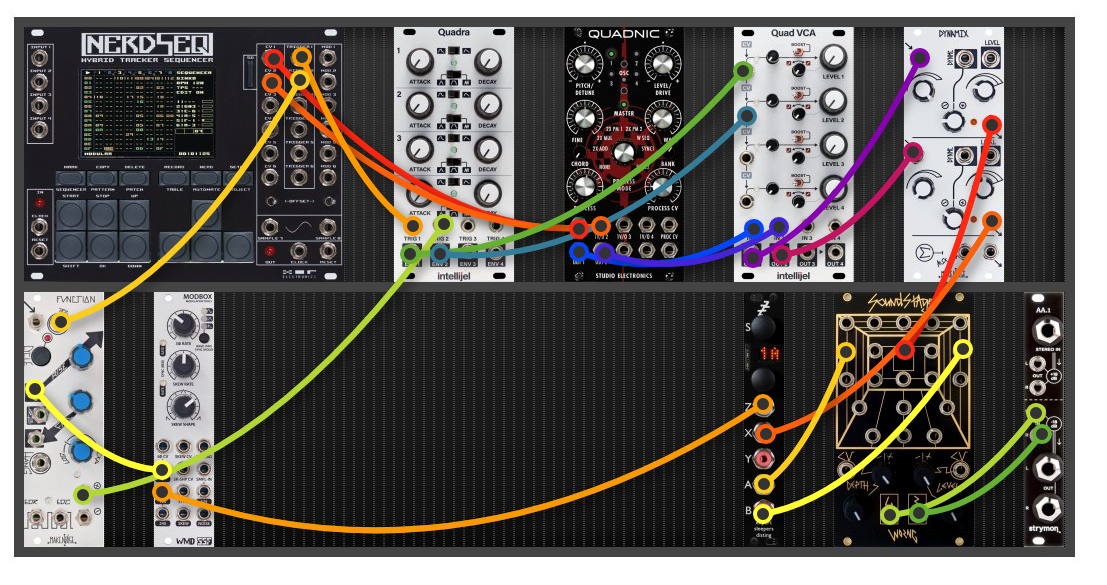 Ben Asaro wrote:DAY 17. Not only a very cool patch today, but I *think* the kernel of an idea! :D Going to put it on the back burner for now, but I like the note choice very much.

I got completely sucked into this while browsing the SOS Forums, and it just kept floating by in very pleasing fashion. I love the way the melody fades in and out in its ghostly fashion :clap:

Ben Asaro wrote:DAY 18. This is a Steve Reich inspired patch: two voices playing the identical part, and one is shifted slightly in and out of time. I added an auto panner to give the "phase" voice some motion and add to the dreaminess.

And ironically this one left me cold - while I enjoy minimalism, I'm not a great fan of it unless there's something slowly evolving in the grand scheme of things.

I suspect this patch idea would work better if it evolved more, either at a similar rate but over a longer period (classic Steve Reich) or evolving more rapidly during the existing time period.

Fascinating listening to all these experiments though!.