Print view
Customising, building or repairing your own gear? Need help with acoustic treatment or soundproofing? Ask away…
20 posts • Page 1 of 2 • 1, 2

For some time I'd been looking out for a Steiner/Crumar EVI, an early ancestor of the Akai EWI. Only about 500 of these analogue wind synthesisers were made by Crumar back in the early '80s, but I eventually spotted one on Reverb in France. It was sold as powers on / untested, which I always find a little disingenuous, but I decided to give it a shot.

When it turned up, I was slightly alarmed at the state of it, and the abundance of rust. 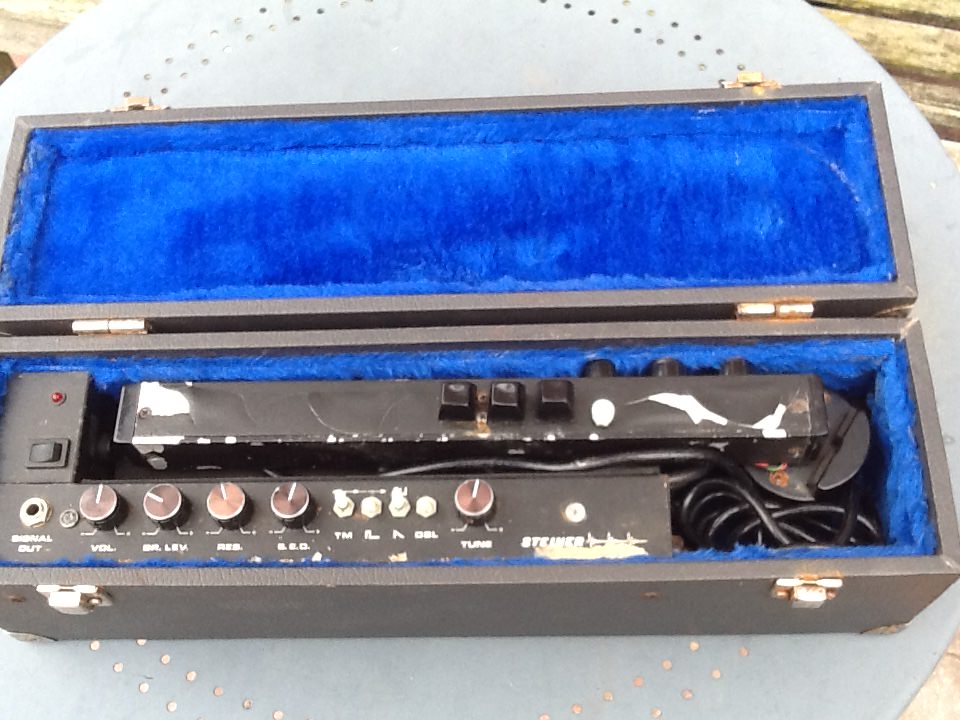 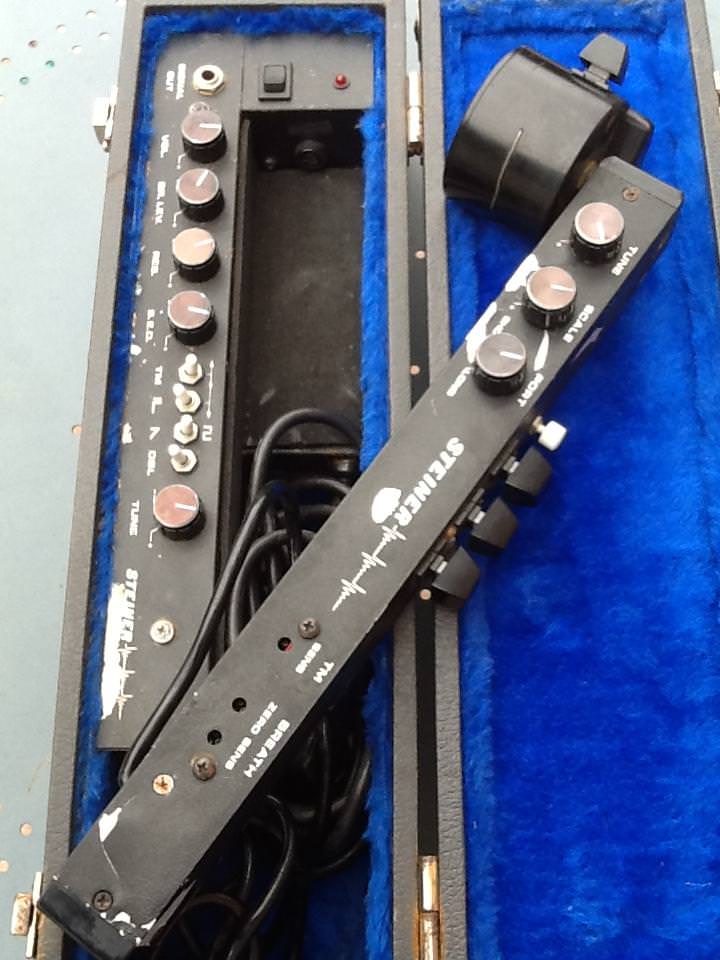 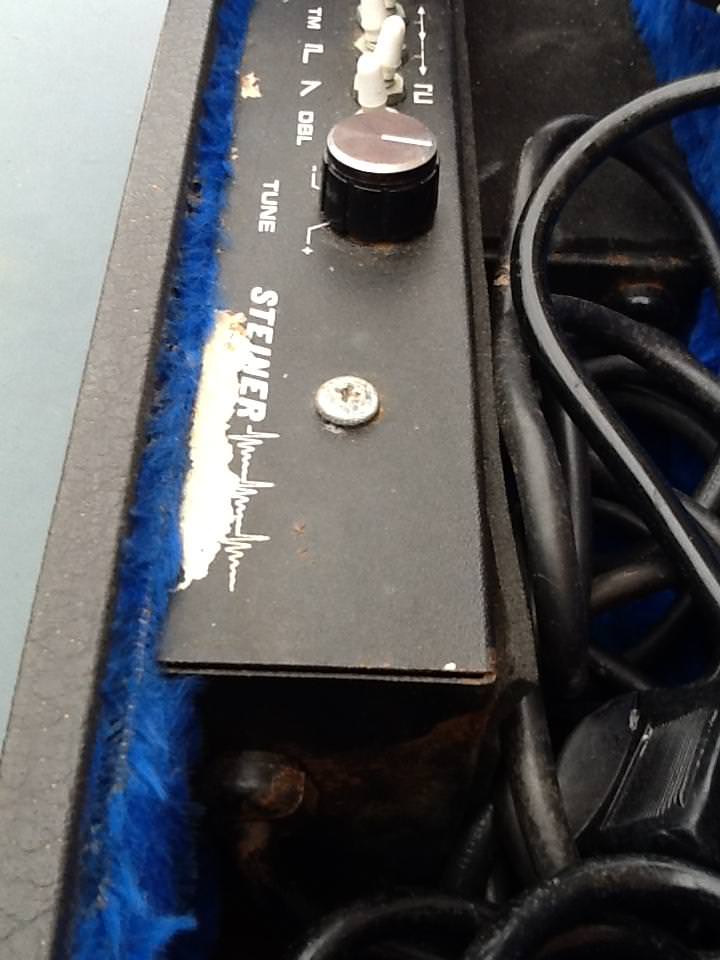 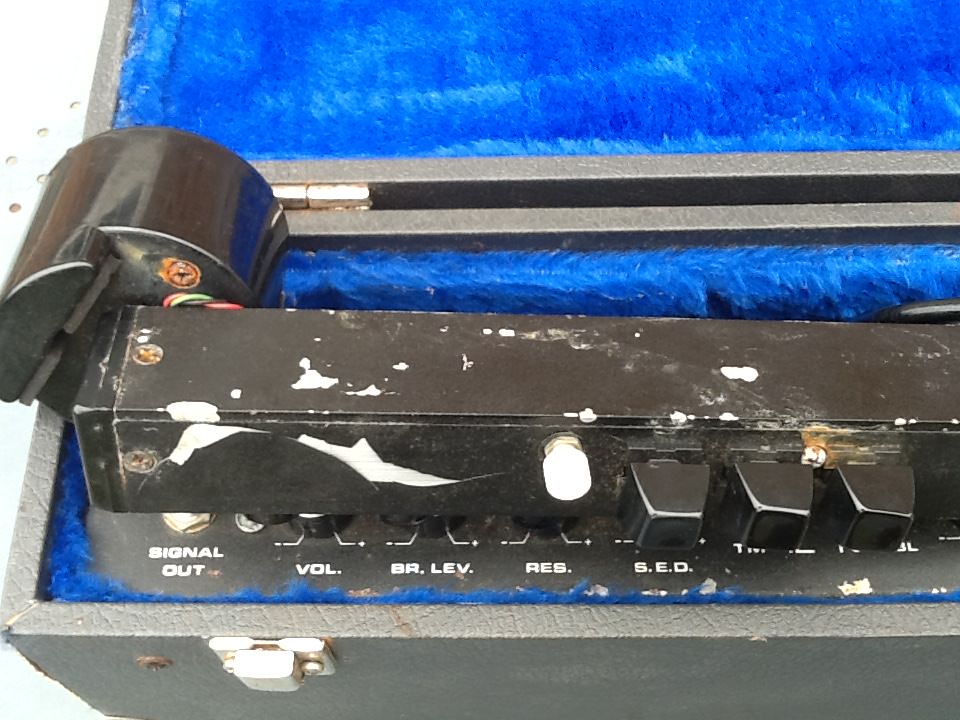 It did indeed power on, but produced no sound except a faint buzzing, and one of the first buttons I pressed promptly got stuck down for good.

With some trepidation, I unscrewed the thing from its case, the bottom screws caked in rust. Thankfully though, the electronics seemed relatively clean. 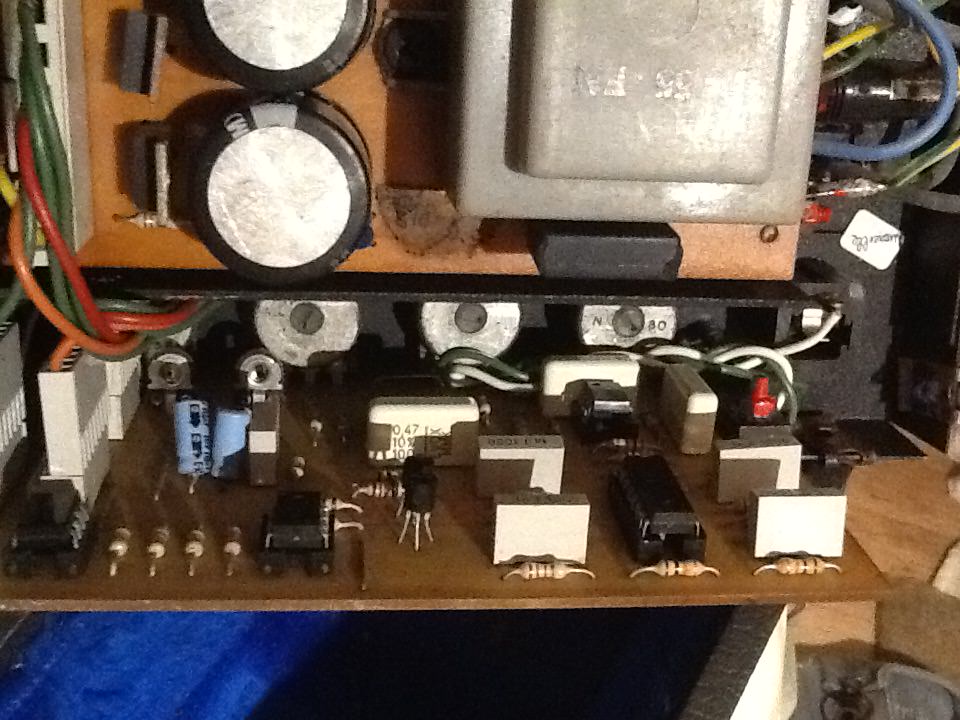 The only place I'd come across which offered to fix these things is wind repair specialist Patchman Music, but they only deal with US-based customers; they don't send or receive overseas, and I don't have any US contacts. So I picked a UK-based vintage synth repair expert, who seemed undaunted by the complete lack of any documentation or schematics.

Today I was finally able to get hold of the schematics, courtesy of Berglund Instruments, who have been in contact with wind synth pioneer Nyle Steiner while developing a modern version of another of his early variations on this instrument; the Steiner MIDI EVI. 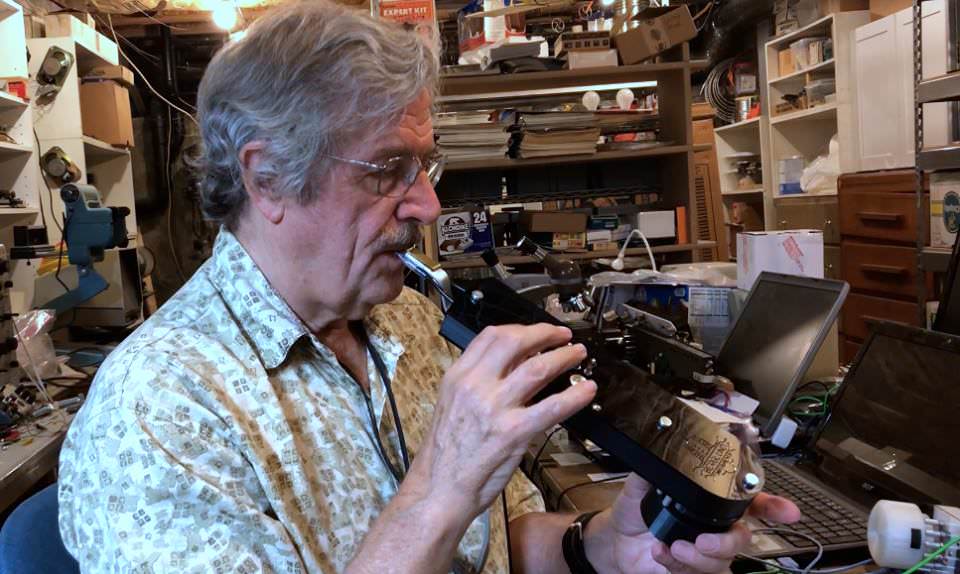 What surprised me is to hear that after apparently being stored in a damp cellar or somewhere for years, the electronics still seem relatively intact, but the pots and switches are crumbling apart. Hopefully it'll be possible to find compatible modern replacements for any that can't be salvaged.

The black finish is also flaking off. I don't mind the old-and-battered look; people love that kind of "relic" finish in the guitar world, though I need to figure out how to seal it so it doesn't flake any more.

Here's a demo of a modified Steiner/Crumar EVI hooked up to an Oberheim Xpander, wielded by Judd Miller. Hoping to play like this if I can get it back in working order...

To my surprise and delight, the EVI has been brought back to life, and today I've been having fun with those squelchy analogue sounds, playing along to dodgy Blues backing tracks. (Apologies for the terrible recording/performance. At least the clipping is in time.)

There's a useful feature that's not yet working, which is a screw that sits under the thumb and is supposed to provide vibrato when you pummel it. So I recklessly pulled it apart to see how it worked, and retrieved this... 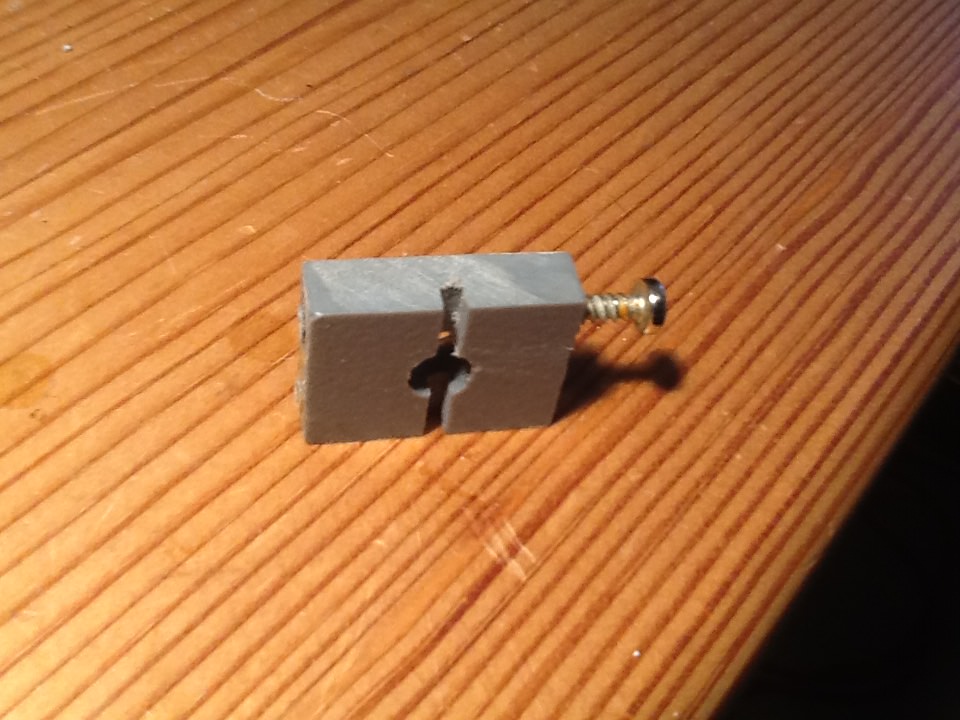 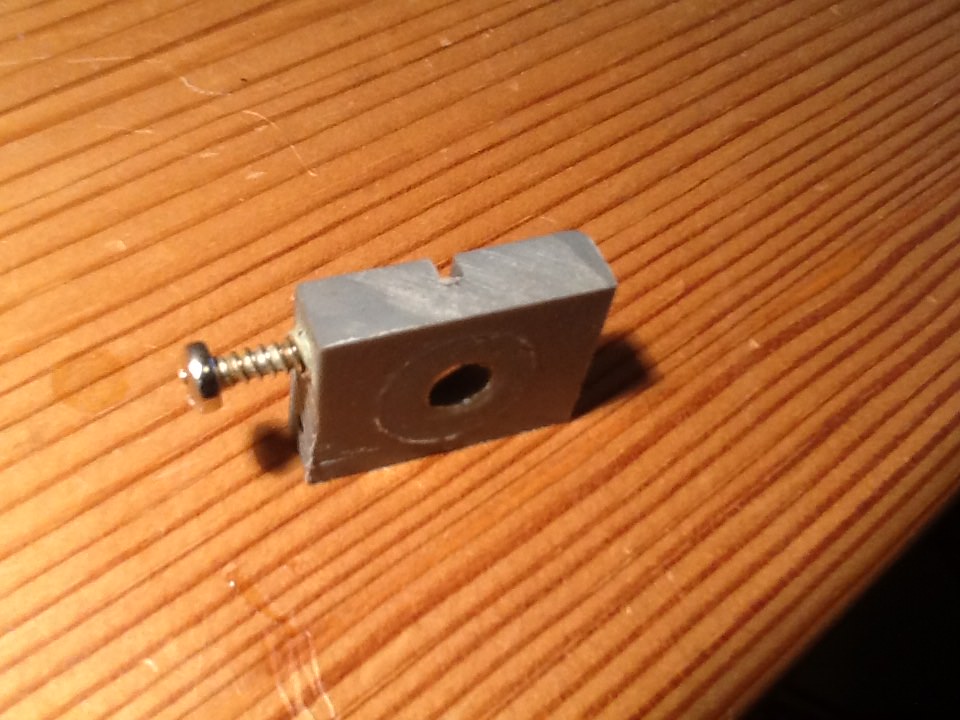 The screw sticks out the bottom of the instrument. It had a small, thin ceramic disk glued to it, with a couple of wires soldered either side. Evidently this widget it's supposed to flex very slightly along that groove when you push the screw, which bends the disk. Pushing the screw did nothing. But, when I prodded the disk directly with a screwdriver, it did briefly produce a vibrato-like effect...before the disk peeled off and crumbled. These are the remaining bits stuck to the two wires. 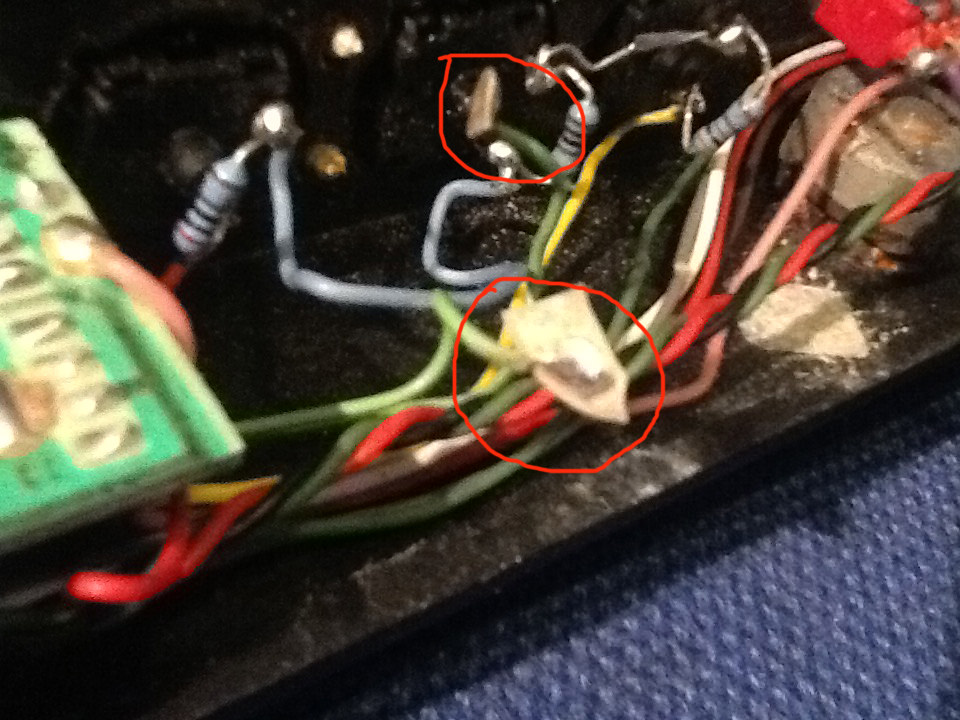 I'm told this was a piezo transducer, so now I need to did out the bag of spare parts from my abandoned MIDI glockenspiel project and see if I can replace it.

Certain EVIs were modified to include pitchbend pads either side of this vibrato control... 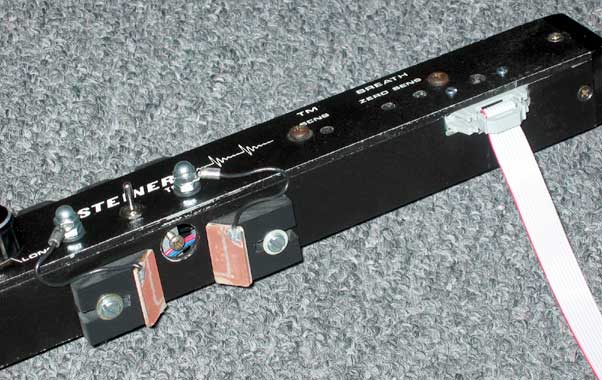 I guess this must utilise the same connections, but apply a steady +ve or -ve voltage when pressing the sensor...? Would be interesting to find a way to implement that.

(I think the ribbon cable in that pic is another modification which provided CV/Gate, but I've found the thing works very nicely with Jam Origin's excellent MIDI Guitar 2 pitch-to-MIDI, so I'll stick with that for alternative sounds.)

Fascinating to see this. Hope you can get this sorted. Unfortunately piezo devices can be rather delicate - especially old ones. 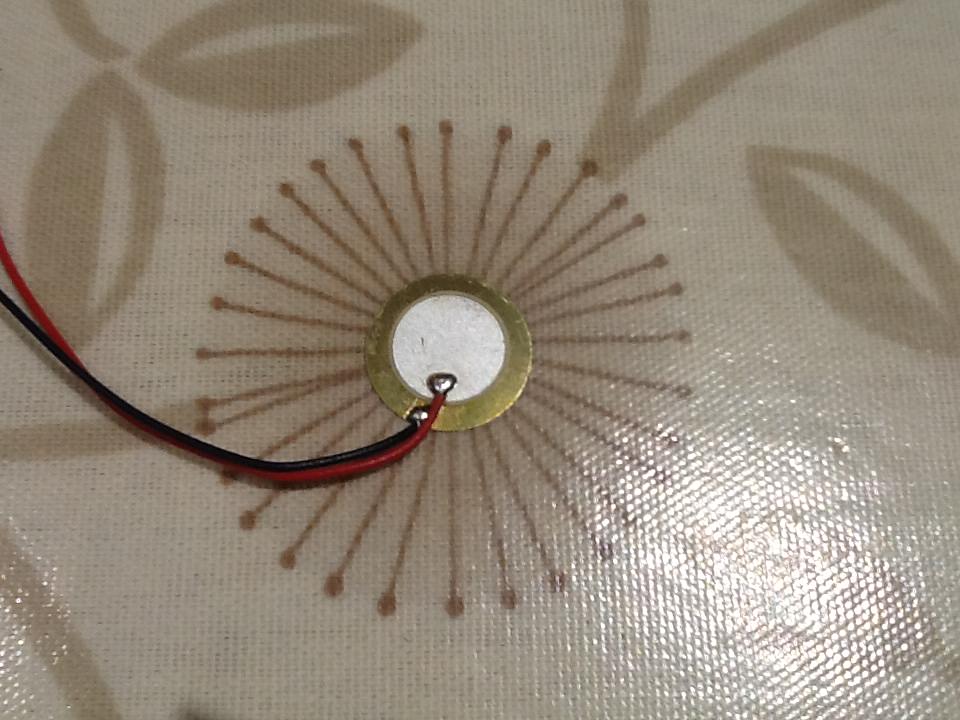 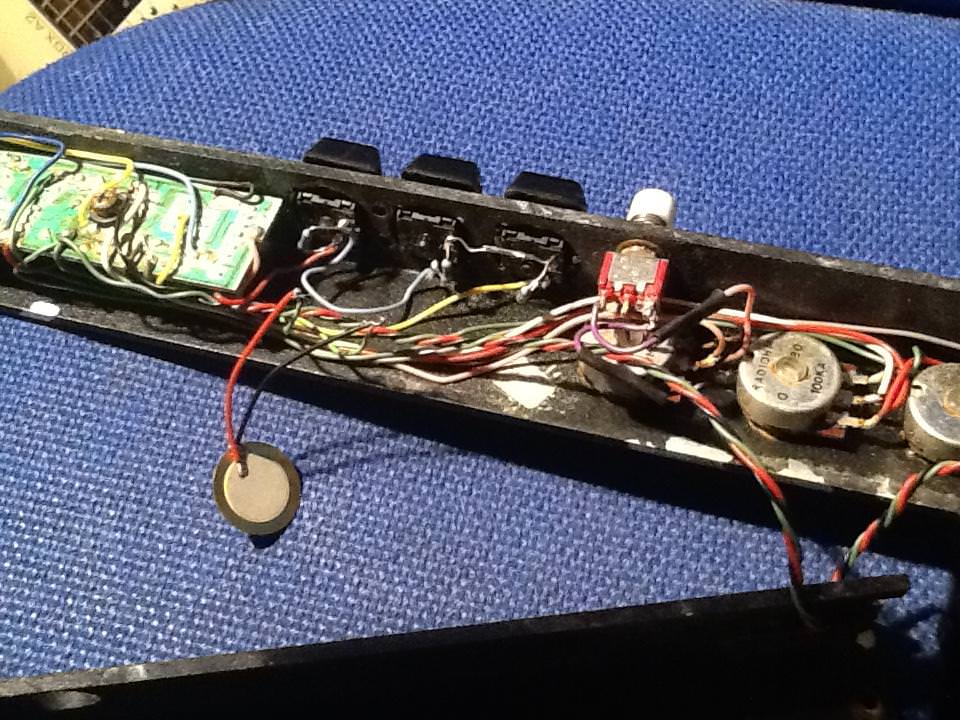 The original thing was just a ceramic sliver glued to that plastic block, so this one with its metal plate is going to be less sensitive. I guess I could take a hacksaw to the groove...unless I could get hold of something more like the original...? Hmm...

Similar piezo transducers are so cheap (50p or so) I wouldn't have bothered salvaging one from another project (you'll only have to replace it and may have done damage in the process). But if you needed to get the EWI going right away (and I definitely know that need) you're forgiven. Now buy a pack of 10 so you can experiment

What I really want is one without the metal plate, with contacts on either side, like the original component. But I'm not sure where to find one of those, if they exist...

...on the other hand, patience was never a strong point, so I just took that one and fixed it to the block with superglue.

To my amazement, it now works a treat...quick demo...

A big thanks to Adrian at Synth Restore for fixing this thing up.

Thinking about it, having that metal backing probably increases the sensitivity as the piezo bit will be more stressed with less movement.

Great to see restoration on early electronic stuff! and the track you played sounds great too. That thing really is a Jazz instrument. Thanks for sharing the restoration, made my morning reading that.

The only excuse we have for making music in the first place is to make it differently..vis-a-vis our own difference (Glenn Gould)

I've been examining the replacement switches, which are keyboard switches, and reading up on the different types available. One of the replacements is a Cherry MX Red, apparently favoured by gamers. It's perfect for this job, providing a smooth, non-tactile, linear response, so I think I might switch the other two out for the same type.

Before Crumar got involved, Nyle Steiner made the first EVIs himself, and these had white keys.

I was just looking on eBay for some custom Cherry MX caps, and found these...I think I have to get a set.

Hello, I am in possession of the same evi as you. it worked for a while, but today nothing. I understand that you have schemas provided by Berglund Instruments. Will it be possible to provide them. I dream of bringing this ancestor back to life. Thanks in advance.

calou46 wrote:Hello, I am in possession of the same evi as you. it worked for a while, but today nothing. I understand that you have schemas provided by Berglund Instruments. Will it be possible to provide them. I dream of bringing this ancestor back to life. Thanks in advance.

It might be more effective to send a Personal Message (PM) to the Original Poster rather than hope he'll spot this addition to the thread... Either way: Good Luck with the project!

calou46 wrote:Hello, I am in possession of the same evi as you. it worked for a while, but today nothing. I understand that you have schemas provided by Berglund Instruments. Will it be possible to provide them. I dream of bringing this ancestor back to life. Thanks in advance.

It might be more effective to send a Personal Message (PM) to the Original Poster rather than hope he'll spot this addition to the thread... Either way: Good Luck with the project!

But he can't yet because calou46's only made one post. PMs unlock after three approved posts.