Print view
Customising, building or repairing your own gear? Need help with acoustic treatment or soundproofing? Ask away…
Post a reply
23 posts • Page 2 of 2 • 1, 2

That form doesn't look to be filled in properly e.g window size - height is 0! (so no window heat gain allowed for).

100w/m2 for LED lighting? I'd expect it to be a lot less otherwise it's going to be pretty blinding.

Can't see any wall/roof thermal gains. It may not be too much with room-in-room construction but something should be there with space for a U-value for each wall and the roof.

Also, will you only ever have 3 people plus yourself in there?

Whilst the overall figure may be approx. correct, the calculation sheet should be filled in correctly to prove it, otherwise they are laying themselves wide open for a professional negligence suit.

A 5kW unit may well be underpowered and will almost certainly be runing in high speed and so producing the loudest noise levels available.

Thank you once again Wonks. You have spotted things I don't have a clue about. i have contacted Max here as per people's suggestions and I am waiting for his reply.

I am worried about the prospect of spending a considerable amount of money on something that may or may not be fit for purpose.

If anyone else can recommend a specialist company I can consult about this I would be most grateful.

I don't seem able to open the image, but ignoring the air con for a moment.

I'm not particularly inclined to get directly involved.
it's someone else design,and I have spent too many years fixing other peoples cock ups.
I just don't need the hassle any more. as an independent contractor or consultant, which is why I'm not one any more.
... and if it came in to my employer for my day job, for air handling is what we do.... , This project falls below the normal scope of my current role..... even if it came to us, and management allowed it to be accepted, it's unlikely I would be tasked with it , I tend to deal with higher profile , higher value jobs....

10 l/s per person is the absolute minimum required supply, as per building regs .. would achieve IDA3 more than likely, although it can just scrape in to IDA2 in some circumstances, to achieve IDA1 then the default calculation value is 20l/s per person , and required minimum would be greater than 15l/s/person

to maximise work productivity , creativity, and stamina , IDA1 is advised.

and this would also require filtration. anywhere between G4 and F7 would be adequate

and there is reason Manrose do not often publish proper performance pressure/flow graphs. (draw your own conclusions)

you would likely be better off with a product from other companies, like S&P ,(TD silent range) or Airflow (Aventa Silent range ) , who at least publish data you can practically use to calculate achieved performance

or any number of other manufacturers....

anyone who will actually publish a graph of the actual achieved airflow against a given system pressure. rather than someone who simply tells you the maximum airflow with no back pressure, and the maximum pressure any air will move against at all.... with no clue as to what happens between, or what the resulting noise figures will actually be, in flow and outside of duct... or indeed predict the SFP with any degree of accuracy./

I would need to review your duct design, in detail, to give any idea of correct spec.

If this is a domestic situation, whoever has specified your ventilation should be certified as being competent to do so.... at very least NICEIC Part F certification.


I would also hope, that CIBSE guide B, (2016 is still the current edition ) has been referenced for heating, ventilation and cooling design specification.


The sensible thing would, as I hinted at earlier, to have used an MVHR design to help minimise the heating and cooling loads , maintain air quality

and if insisting on only one fan, then extracting makes more sense ..... noise tends to travel with airflow.... putting your only mechanical in to your supply airflow means you have to work harder to reduce the noise in the incoming airflow,


although frankly, I'd put one in each.... because you have to consider the system pressure from inlet on exterior, to outlet on exterior, as being driven by that one fan.


fans in series will not increase fundamental rate, but will increase ability to overcome system pressure.

thus, one on inlet, one on outlet, would help maintain the target flow rate, but cope with the pressure, potentially with lower noise as it won't have to work so hard to achieve the actual flow rate

don;t be fooled into thinking there is a direct straight line relationship between fan speed, and flow volume ... this is only true when there is no resistance to flow , such as would be imposed by a duct system .
at which point, the internal friction coefficient of the duct surfaces, and the smoothness of the design, turbulence or lack thereof, cross sectional area, and a whole raft of other parameters have an effect on the actual achieved airflow....

when a fan speed says it can do say 61 l/s with no pressure reference point, AT 61 l/s then the speed spec is in to open air...

if a fan says it's maximum pressure is 200 Pascals.... at the blade rotation speed that gives 61l/s in to open air.... then 200Pa is the maximum pressure against which so much as one molecule will make forward motion.... achieved flow rate 0.00001 l/s sort of thing....

Now available for consultations and audio engineering jobs .  Also guitar tech work , and “rent-a-shredder” sessions .  Oxfordshire based but can and will travel .  Email maxtech.audio@me.com
Top

I found that opening the image in another window worked for me.

This should be better. I think the other images are thumbnails. 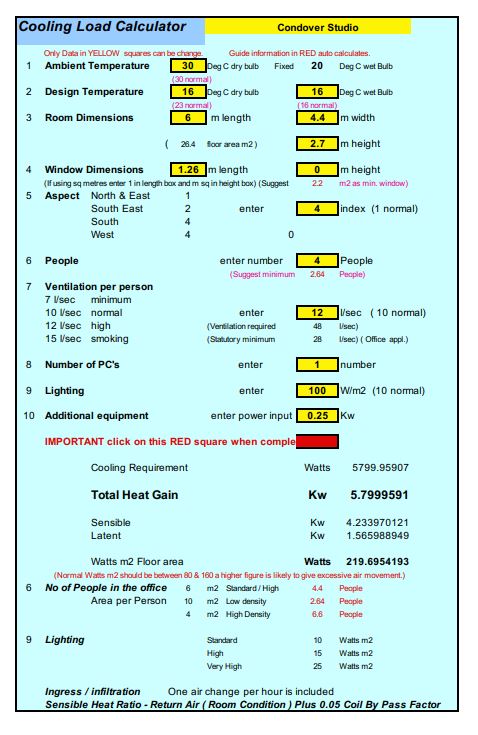 Thank you Wonks and Max for all your help so far, it is much appreciated. I am going to have a chat with my AC installer again to try and get to the bottom of this.

Have found it extremely difficult I must admit to find tradesmen who really know their stuff and who are willing to take the time to do a proper job.

Wonks wrote:This should be better. I think the other images are thumbnails.


Methinks the suspicion of massaged just a little under size figures, to be able to quote cheap and win the job might be rearing it's head.

Now available for consultations and audio engineering jobs .  Also guitar tech work , and “rent-a-shredder” sessions .  Oxfordshire based but can and will travel .  Email maxtech.audio@me.com
Top

I have issues with my AC unit bringing street noise in from the hole in the wall that the unit goes through. Something else that might be a concern for you. Most studios I see have the AC in another room and then fans and ducting that bring the cool air in from the room the AC is in into the tracking and control room.

I have heard LG Art Cool is supposed to be pretty quiet though but I haven't heard or used it myself. I like the idea of the Art Cool because they put a smaller hole in the wall. My last studio had an evaporative AC which was good as most the noise was outside on the roof and not heard much from the inside so you could actually have it on when recording.