Print view
Customising, building or repairing your own gear? Need help with acoustic treatment or soundproofing? Ask away…
Post a reply
12 posts • Page 1 of 1

So, I've been watching a few videos on youtube regarding epoxy inlays & quite fancied the idea of using this to enhance a kit guitar. I figured I'd maybe start with something flat like a telecaster before getting too adventurous. Not having tried this before I thought I'd practice on an offcut & given the result it seems this was a good idea! Even though it didn't turn out quite as expected, it was a learning experience so I thought I'd share the results.

I started by scanning a logo from an old magazine, cut out the lettering & transferred it using a pencil before scoring the edges with an awl. It was the first time I'd used the Dremel as a router & initially had the speed set too low. I struggled with the 'D' because of this but the rest of the logo went better. I used a beaver scalpel to sharpen the edges but sadly lost a bit of the 'D' in the process. 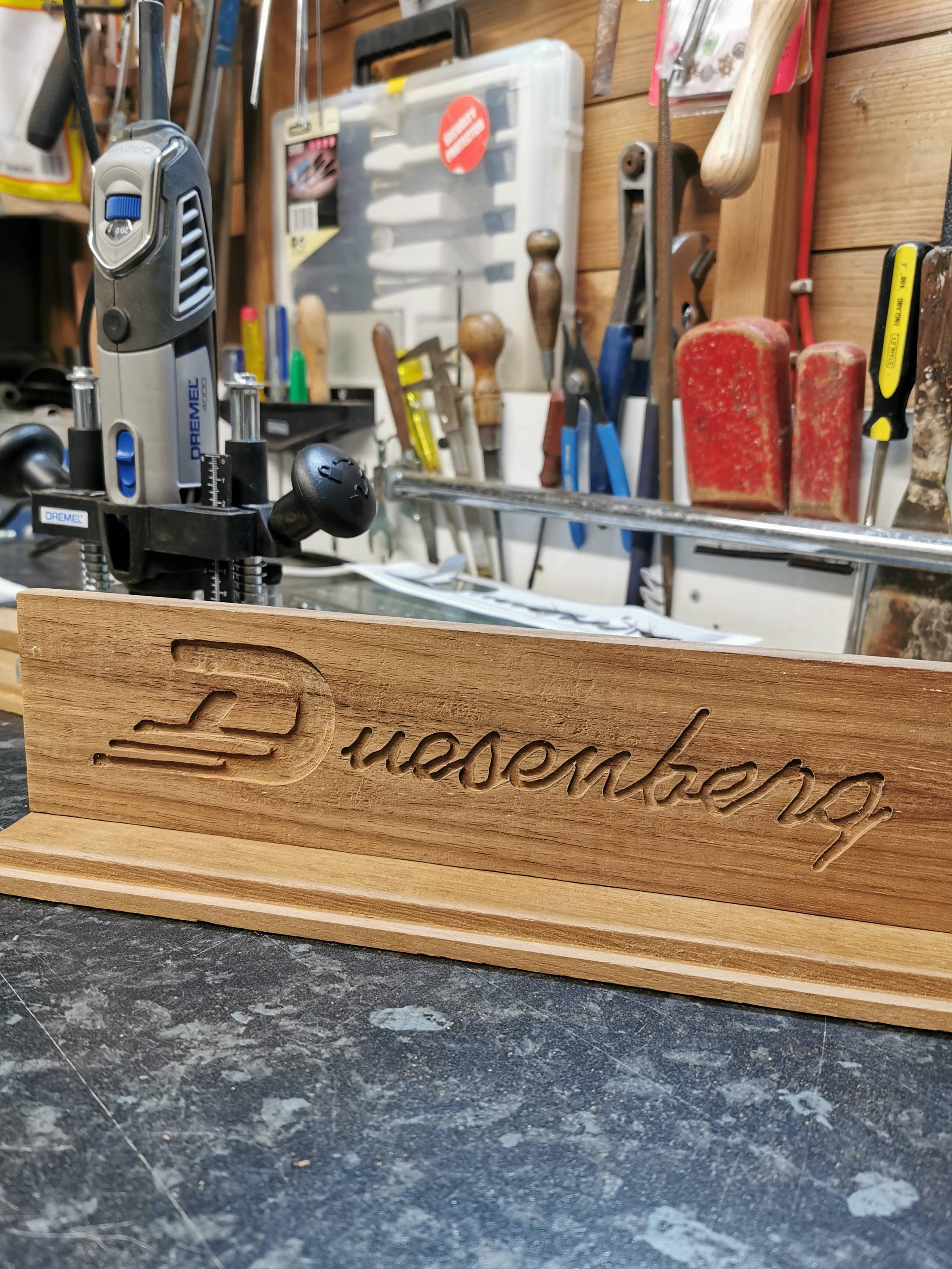 I got the epoxy resin (50/50 mix) & some liquid colours from Amazon & set about mixing as close as I could to the Catalina Green of my Duesenberg. In retrospect I should have painted the routed lettering white before adding the epoxy because the wood was so dark. I know this now but all the videos I'd watched had used pine so the colours were much brighter. I added way too much epoxy, let it dry for 48 hours & then lost an afternoon (& the will to live) removing it with a palm sander working my way from coarse grit to Wet & Dry. 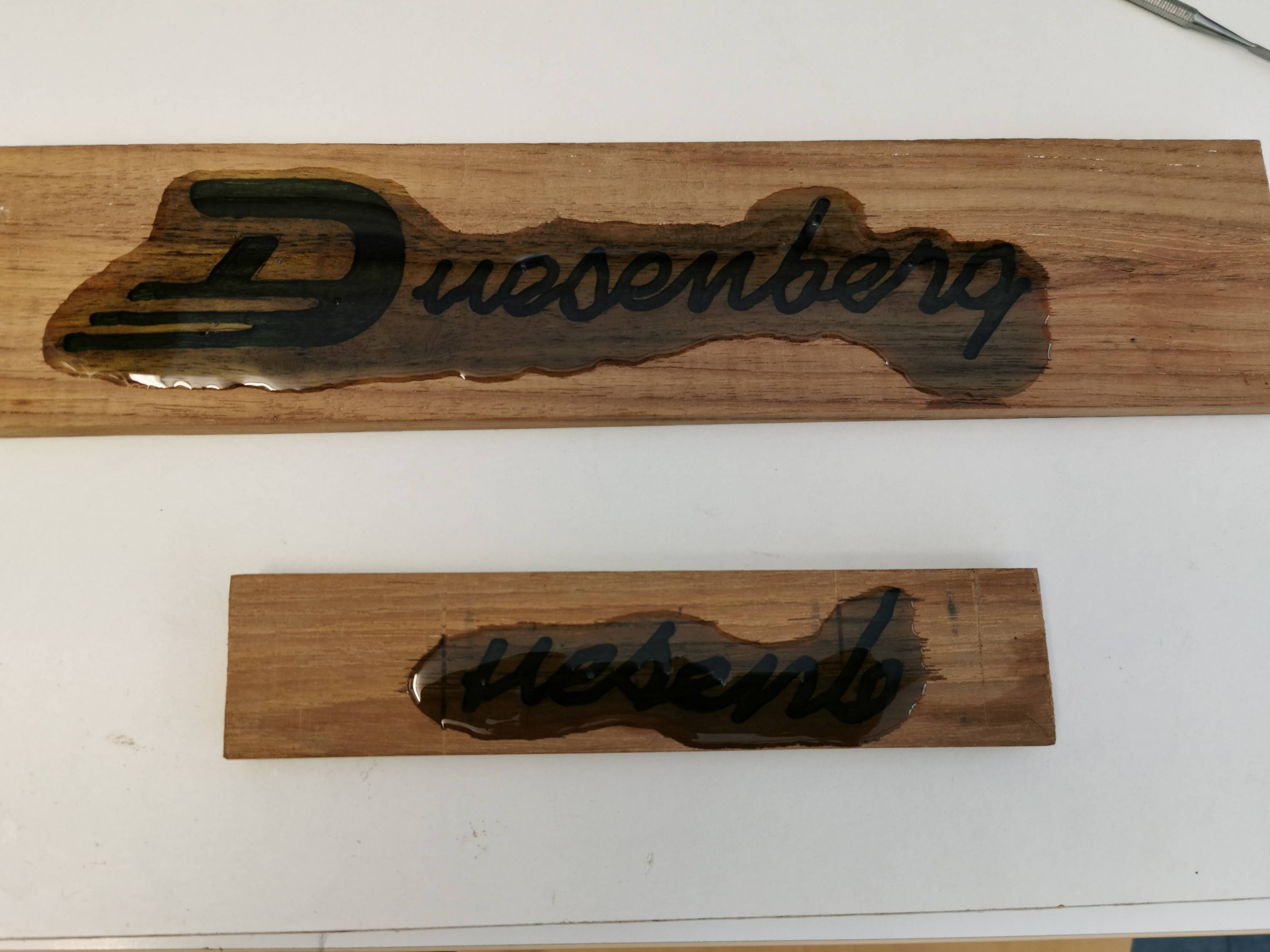 In the end I didn't stain the wood, just finished it with some fretboard oil. Whilst I'm not exactly happy with the result, it's not dreadful for a first attempt & at least I've learned a few things along the way. 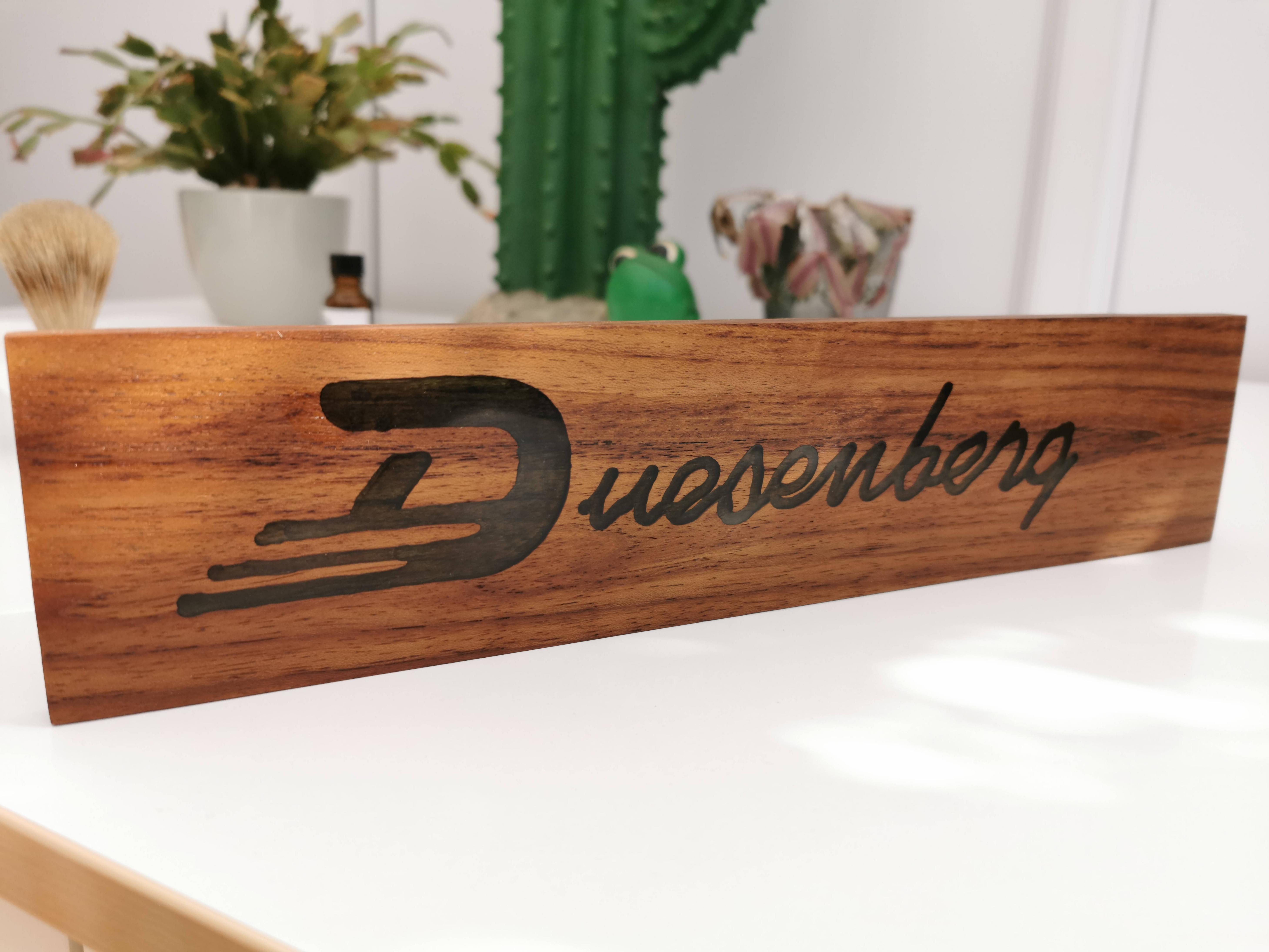 If you try something similar in the future, follow your experience and use far less epoxy. And also allow a few more days to let it harden properly; as you discovered, once you remove the hardened surface you find that you are trying to remove softer material. A thin coat as a surface or as a glue joint will cure in 24-48 hours, but a thicker layer takes a lot longer to cure.

Rather than a sander I would have used a cabinet scraper or very sharp plane with a very fine cut to remove the excess. Sanding creates a lot more heat through friction which can soften epoxy that hasn't fully cured. And remove the excess in stages, take a layer off and then leave 24 hours for the new surface to cure further.

But don't give up on epoxy; as well as using it for an inlay material you can also use it stained as a filler to match the fretboard material when mounting cut inlays in shell/metal/bone, and you can use metal powders like brass, copper, and aluminium to add bling to inlay designs.

Rather than taking on another large design, I would suggest making a whole bunch of much smaller test pieces to practice your techniques and get to know the material better.

Finally, don't forget that you can use your Dremel router to make templates to cut your inlay channels accurately and reliably. You can buy a massive sheet of MDF for the same price as a fretboard blank. Far better to waste a fraction of the MDF in failed templates than to trash a decent fretboard blank.

Interesting (and nicely done). Can't think what i might have a use for it at the moment, but it's good to know the technique exists.
I'm impressed by your dremel routing.

So am I. I've had to do a lot of Dremel routing inside my wooden cases to house my electronics (cutouts for pots are not too bad, but toggle switches are tedious), so I agree that the speed needs to be fast, but for your first attempt this is admirable work. :clap:

With a Dremel you say! Nice.
So am I guessing right that this was all done free hand? No template to guide the Dremel?
If it was me, I would still be working on my 50th attempt at the letter D.
I try and be slow and steady with tools but then I sneeze or blink or something and suddenly I’ve buggered it up. I justify the little hiccups as being “organic” having that human touch.

I used one of the JB Weld products (glue) to fix a broken headphone band.
One tip, the stuff STINKS, don't ever use is inside.
Hopefully the resin is different.

Top marks to Andy for spotting the 2 cabinet scrapers in the top pic. Never even crossed my mind! A lot of pro's just use a thicknesser but I currently don't have room for one. I considered using a plane but didn't have an easy way of clamping the job without a lot of faff that didn't get in the way.

Epoxy resin doesn't smell. The biggest problem is bubbles getting trapped, hence the need to overfill a bit. If I do any more fine detail I might try a plastic disposable syringe. It pours a bit like syrup so it's hard to judge how much it'll spread.

The thing I found hardest to adjust to with the Dremel & plunge router attatchment was that it doesn't have the weight of a regular woodworking router. It cuts cleanly enough but you need to add a bit of downwards pressure as you guide it.

I'm ordering a few cheap chopping boards to practise my technique on, which I can give away as presents if they turn out nice. I also want to try my hand with MOP & abalone inlays and I've seen some amazing results with melted wax crayons & epoxy. So no guitars will be harmed in the process, yet.

I've cast silver. Handy hint, when you make the plaster of Paris mould it's placed in a vacuum to remove all the bubbles.

So, instead of overfilling you might consider jury rigging a vacuum pump to get the bubbles out ;)

Had to google 'jury rigging' but sounds like a plan. :thumbup:
People also recommend using a heat gun if you get bubbles. It seems there's a fine line between not stirring the mix enough & over-stirring (which creates bubbles). I must have had beginners luck because I didn't get any & it set like a rock.

I've actually got a vacuum former with a heating element I've never used that could be pressed into service for epoxy moulding scratchplates, knobs etc. It was £3k new, bought for a dept that never materialised & I was tasked with putting it in a skip when the building closed. I got as far as my car boot & just couldn't carry it any further... I've never used it because the switches, screen menus & instructions are in Swedish! It's buried in the shed, I shall investigate over the weekend.

I can't speak for epoxy, but when it came to casting silver it was a combination of a vacuum and vibration to get the bubbles out of the mould.

It's not beyond imagination to place a vacuum packed bag into an ultrasound tank ;)

Beware a heatgun on epoxy! The stuff thins out drastically and has the viscosity of Helium ll !

I found the best way to get rid of bubbles is with a blow torch : very lightly wafted over the fresh resin, it won't burn the wood and you get a ton of bubbles coming up. Then repeat every 30 minutes until you don't get any more. Great you didn't get any in your mix, maybe you have the knack...

Everything You Wanted To Know About Studio Headphones.
4 weeks 21 hours ago.