Running a Poweramp without fan? Skip to main content

Running a Poweramp without fan?

Print view
Customising, building or repairing your own gear? Need help with acoustic treatment or soundproofing? Ask away…
Post a reply
41 posts • Page 3 of 3 • 1, 2, 3

Sam Spoons wrote:Will, have a close look at the pics before I send it, there seem to be a fair number of repaired traces on the PCBs which might be what is making the repair troublesome.

I have a number of sneaky tricks for dealing with damaged PCBs :silent:

Email with attachments sent to your registered SOS email account.

Thanks Hugh, much appreciated :thumbup:

Sam Spoons wrote:Will, have a close look at the pics before I send it, there seem to be a fair number of repaired traces on the PCBs which might be what is making the repair troublesome.

I have a number of sneaky tricks for dealing with damaged PCBs :silent:

Fair enough, will pack it up and send it early next week.

I had some concerns about writing up this repair. Initially I didn't know anything about it's provenance, or who might have done what to it, nor what their professional status might be. It now seems it has had multiple owners, and probably many people working on it over the years, so there can be no question of finger-pointing (not that I'd do it anyway).

The first thing I did was a thorough visual inspection. Although the amp is in a rack mount case, judging by all the scratches and flaking paint it clearly has spent most of its life not in a rack. However it looked structurally sound. It is delightfully accessible, with just six screws to undo, then top and bottom covers come off. The channels are on completely separate PCBs and you have clear access to both component and track sides. PSU right in the centre is not so accessible as it's sitting on a chassis plate.

The inputs appear to be fed with plain isolating transformers, sitting in front of the PSU (which seems an odd place to put them), rather than the active ones shown in the drawings I have.

Inside, one of the first things I noticed was two caps that that were not only replacements but much bigger physically than any others, and on long legs, so not terribly secure - presumably from someone's 'spares' box. I noted them for replacement. There were a number of resistors that had been replaced - again rather over the top, but not enough to be worth replacing. There were also some resistors that looked scorched, so would have to be tested and replaced if out of spec.

The main caps on the PSU looked suspiciously clean, and there was obvious evidence of a lot of work having been done on it's PCB. This is the only part of the amp that's not easy to get to, but obviously they were replaced at some time. Interestingly, the power to the two channels is quite separate, a single toroidal transformer, but two centre-tapped secondaries - one for each channel.

The thing that bothered me the most was that on both channel boards there were a lot of places where tracks had been cut, and then bridged over with solder. Finally and the bit that really annoyed me was that two medium power devices had had their legs cut, then resolded back together. These could very easily have been unsoldered.

Track cutting is a last resort when you have a direct short with multiple devices directly across the short. However, before doing that you unsolder everything possible first. On one board there were far more cuts than could possibly be justified, and some of the tracks had several cuts between just two solder points. On top of that, simply bridging a track cut with solder is asking for trouble.

So, the first thing I did was to go over every point where this cutting and been done, examining them with the aid of a magnifying glass and testing continuity. I found several that looked borderline, and just one that was completely open circuit. I marked either side of the break, and took a picture. It is right in the centre of the image below. If you look to the lower right you can see another one. This hadn't actually failed, but (zoomed in) you can see a fracture developing. You can also see where whoever cut the track slipped with the knife, and scratched the adjacent one slightly. 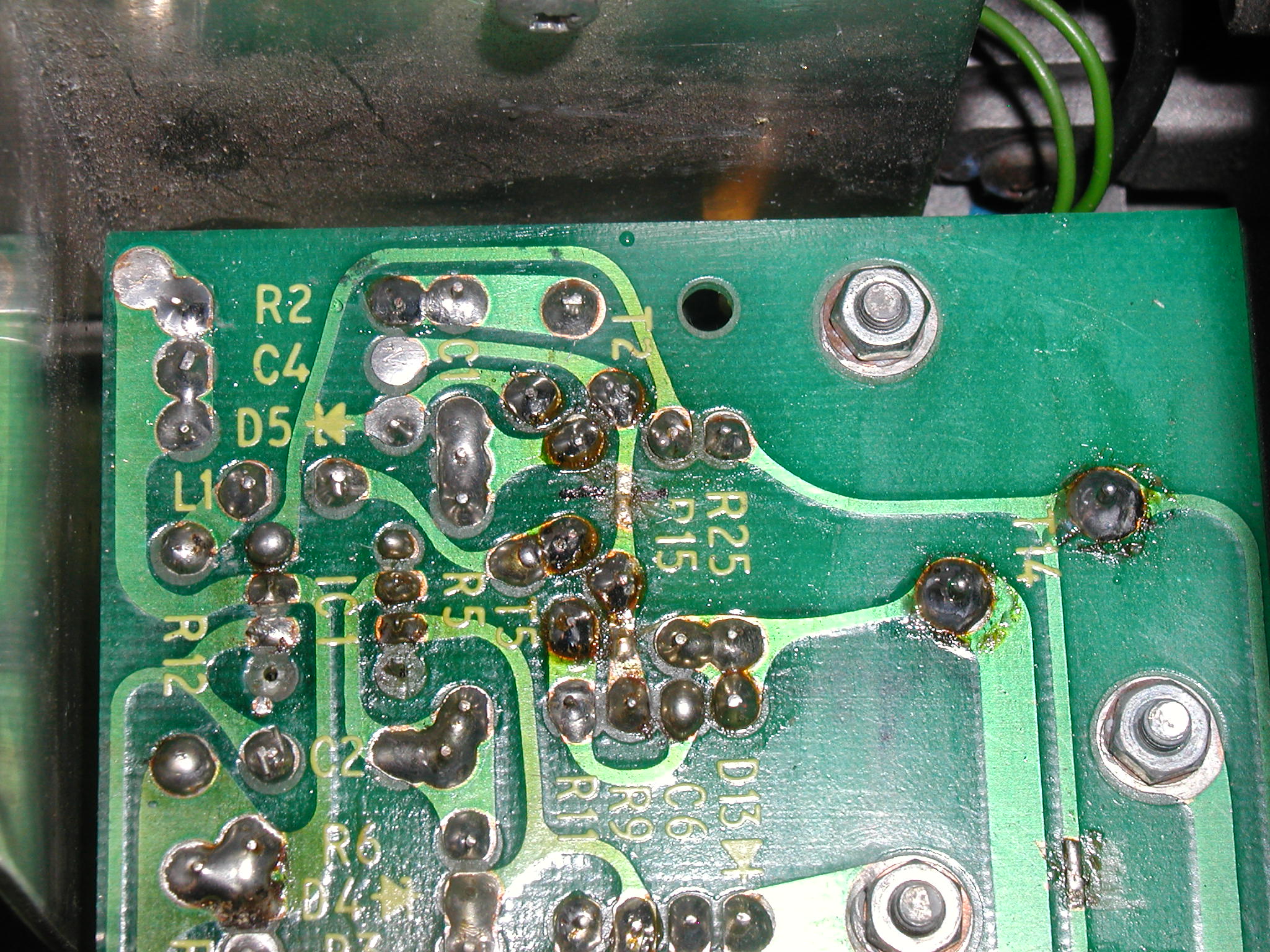 This really underlines why you should never do this. I left these until after I'd replaced the caps, and checked the scorched resistors (which all turned out to be OK).

My way of dealing with this problem was to leave everything undisturbed, but make proper links with thin flexible wire following the profile of the track and actually soldering to the nearest proper solder pad carrying a component leg. This gives a secure connection, and by following the track (rather than taking the shortest route) doesn't result in a confusing pattern for anyone following. The links are also bright yellow, so quite obvious. On the PSU chassis plate I wrote what I'd done and why. I always try to think of the next person.

Once I was satisfied I'd got all of them (and there were far more on one board than the other) it was time to power up. I did some sanity checks across transistors etc. and a quick test with a meter proved all fuses were OK. However, I couldn't be sure there were no problems. The separate power supplies meant I could use my bench PSU to partially power up the channels individually, with current limit protection. I simply attached clips to the caps. The first test was with 64V DC limited to 500mA. Both channels actually drew slightly less than 100mA, and applying a signal (but with no load) there was very little difference in current and output waveform was clean. With more confidence I upped the limit to 2A, and fitted a 16ohm load - all still good.

Feeding mains properly and fitting 8ohm dummy loads still showed no issues, and I ran the amp like this at 20W per channel, with short bursts of 50W (the maximum my dummy loads can handle). After a while the heatsinks were getting just comfortably warm. Finally, I put the covers back on and connected a music player to it, with a pair of 4ohm monitors, then let it run as loud as I could and as long as possible without annoying the neighbors, keeping an ear cocked for any oddities. There were none.

I've not come across so much track-cutting as that before. Presumably a complete butcher of a technician was trying to isolate sections of circuitry... but that doesn't seem like a very good idea to me, and I completely agree about the reliability of solder bridges!

Finding replacement power caps that fit the original mechanical design of these Quad amps is a well known problem, unfortunately.

And the input transformers will probably have been a BBC-specific modification...

BTW, I've dropped the image into the post as it's much easier for people to see what you're talking about without having to leave the site and open another window,

Well done Will. And thanks for the detailed write-up, very educational. :thumbup:

I'm rather inclined to think that all the damage was done by someone who was only familiar with much simpler designs, and was working without a schematic, quite out of their depth. They probably panicked and just tried everything they could think of. That channel was the one that also had one of the caps, and the resistors changed, along with at least one transistor.

I could very easily have been in the same position when I hadn't been working on TVs for long, one of the house calls I had involved one of the 'new' hybrid valve and transistor designs. I'd never even seen one before, and had no drawings for it. Fortunately, I had a 'normal' loan set on the van so temporarily swapped it. Back at the depot the following day it created quite a stir as most of the other engineers were unfamiliar with it too. It turned out the customer was a transfer from another region that was trying these out, and had trained their staff!

P.S. I never did like them. One or 'tother please :beamup:

I still regret selling my MusicMan 112RP65 guitar combo. That was a hybrid with, strangely, op-amps in the preamp and valves in the power amp, sounded great. I modded it to RP100 spec (and it did give 100 watts rms from just two EL34s, scoped it to check). Just a matter of swapping the mains and OP trannies.

But, usually I'd agree from a user viewpoint.

zenguitar wrote:Well done Will. And thanks for the detailed write-up, very educational. :thumbup:

Agreed - a very logical approach, and a fascinating read :ugeek:

Excellent conclusion to the thread, in all respects! :)