The ideal control room: My ideas and discussion Skip to main content

The ideal control room: My ideas and discussion

Print view
Customising, building or repairing your own gear? Need help with acoustic treatment or soundproofing? Ask away…
Post a reply
15 posts • Page 1 of 1

The ideal control room: My ideas and discussion

Hi fellow nerds :) . So I am currently studying sound engineering at Iceland and naturally have some interesting ideas and thoughts about sound, the first of which I am posting here:

So the last couple of days I have been thinking: what would the ideal control room look like? My first thought was to simply have no control room at all. Just a single speaker in the sahara desert but that isn't really what we are after right? We want to have at least a small resemblance to the typical living room, as that's where other people are going to listen to your mix. But as we put walls around our speakers, we create the problem of phase cancellation and addition from reflections of those walls creating so called comb filtering. Yes those are of course in all living rooms too but at different frequencies and volume depending on the room. So we try to put some foam in the way of only those earliest reflections from the speakers and leave the rest to be "living room reveb". The second problem with walls are standing waves (room modes). These happen when a pitch is played that happens to either cancel out or add upp with it's reflection on paralell walls due to the length between them. A "quick" way to fix this is to decrease the number of paralell walls by making the room a bit odd shaped. BUT this in return introduces another (maybe a slightly smaller) problem: The stereo image. When the room is not symmetrical, the reflections of the left and right speakers are slightly different and though it might be a small problem, we are trying to get the best theoretical control romm possible. So finally for the fun stuff:
Can we make a symmetrical room with no standing waves? Well here is where I'm hoping to get a discussion from you guys as well as general ideas about the "perfect" control room. My idea is to build a oval like shape where all reflections reflect at an angle (not straight, building up standing waves) exept maybe at the x and y axix so possibly it would need 4 bass traps. (link to image of the shape below). 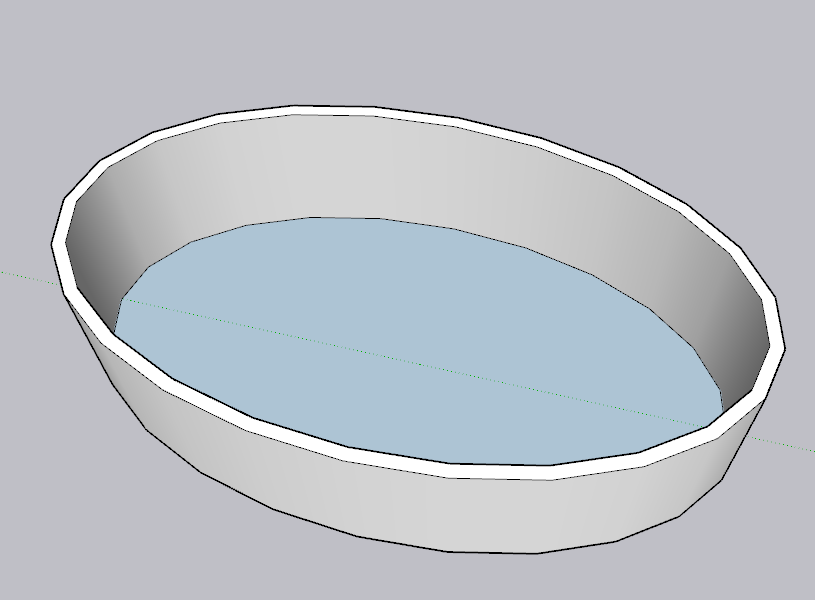 Hi eythoralex, and welcome to the SOS Forums.

eythoralex wrote:So the last couple of days I have been thinking: what would the ideal control room look like? 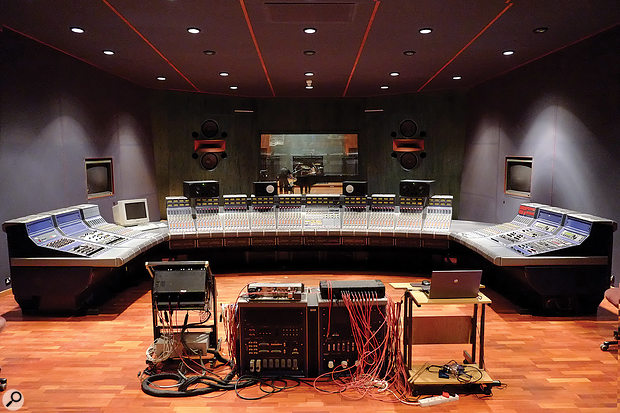 This happens to be Studio 1 at the Bop Studios, but all of Tom Hidley's ' Non-Environment' rooms are essentially the same, with the monitors mounted flush into the front wall, and all other room boundaries being fully absorptive. The result is a room which is effectively anechoic as far as the monitor speakers are concerned, while still providing a natural-sounding environment for the users. Hidley's designs (which date from the early 1980s) revolutionised the way low frequencies were managed in control rooms, using waveguides and diaphragmatic absorbers, 'symmetrical unloading', and various other innovative techniques.

The main reason his ideas are not more widespread is the enormous cost and the even more enormous control room shell floor area requirements...

But I've had the privilege of spending some time in three of his studio control rooms and they are, without doubt, stunningly impressive places to work! I can't imagine anything more ideal....

You can read more about Bop and Hidley's NE control rooms here:

You do need a small airplane hangar for that one, do you? :D

In terms of sound reproduction for mixing you'll struggle to improve on the control rooms at Bophuthatswana Recording Studios in Africa https://www.soundonsound.com/music-business/bop-studios-story

The concrete shell of the control room is massively bigger than the finished floor space because of the all the LF trapping, so yes, a hanger is about right! 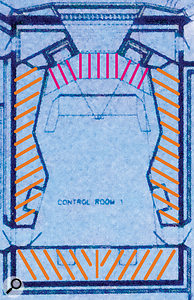 looks amazing! But can you answer why a mix in an "anechoic" room would not sound too wet when played back in a normal room. My prediction if I were mixing in a completely dead room, that I would put more reverb on everything to compensate and in return it would be too much when put in a more reverberant room.

eythoralex wrote:looks amazing! But can you answer why a mix in an "anechoic" room would not sound too wet when played back in a normal room.

My prediction if I were mixing in a completely dead room, that I would put more reverb on everything to compensate and in return it would be too much when put in a more reverberant room.

It's not a 'completely dead room'. As I said above, "The ... room which is effectively anechoic as far as the monitor speakers are concerned, while still providing a natural-sounding environment for the users.

I can assure you that, in practice, it is a very good environment to mix in and the mixes travel extremely well. Ask the engineers and producers who have worked in rooms like this, most notably at Masterfonics in Nashville amongst others...

Well then I guess thats the end of the road for the search of the perfect control room (maybe studio in this case?). But out of interest... what are those 2 black things in the walls in the main control room? Beside the main speakers on either side.

eythoralex wrote:But out of interest... what are those 2 black things in the walls in the main control room? Beside the main speakers on either side.

Ah, my young padawan... they are what we used to call Cathode Ray Tubes... sometimes also known as 'television monitors'... :D

Used in this case for displaying things like CCTV cameras in vocal booths and machine rooms, and potentially also the desk automation computer displays ...

Ahh ofc. Although I'm only 19 y/o, I have worked on those at my old high school in addition to having a big tube tv at home when I was younger (by the time we switched it out for a flatscreen it took about 15min to turn on) ;)

That is nuts. I wonder what their day rates are now. I want to go and get my photo taken on that console!

That is nuts. I wonder what their day rates are now. I want to go and get my photo taken on that console!

Late 2019 the main Focusrite console was shipped to a studio in Phoenix, AZ, so at least that one is gone..

I remember reading Toole concluding that the lack of a standard target response has resulted in an utter mess.
Nearly all Control Rooms have an anechoic path from speaker to ear. Not just 'effectively' but actually. But sounds emanating from the centre of the room will deliver feedback, typically the Front Wall, Floor, Diffusors behind and overhead. This seems in direct conflict with the reactions we see when people try listening to music in Anechoic Chambers. Why? There are Lab perfect Headphones available. Nobody mixes on them. Why? Many studios I have worked in do not encourage mixes which translate to the real world. Why? Many many of us have resorted to bringing in small domestic speakers, eventually the HD1, nowadays it seems to be Amphions.
There have been a couple of Acousticians which seriously attempted to include an ambience to both speaker and human sounds. Moulton, Boggy.
Some of us use rear speakers and 4.0 to turn on envelopment for fun now and then.
Quite a few of us advocate accepting the Anechoic. Big Headphones if you will. But we tailor the tonality to that of the average domestic. The Bruel and Kjaer or Harman Curve. A 6-9 dB tilt downwards towards HF.
Experience (and research) has shown that at least professionals can 'hear through' various levels of ambience without changing reverb and delay habits. If anything, one may be more inclined to add excess Rev and Dl when mixing in an overly ambient environment. To hear it. So how do we square this circle? Well the B&K curve works very well in a dead room, and many headphones have a similar tonality build in, particularly Sennheisers. But I think the sadly late but great Bogic Petrovic, Boggy, has contributed a really historic effort to maintain the surgical clarity needed, but in an somewhat domestic ambience. RIP my friend. https://www.gearslutz.com/board/studio- ... -ii-4.html

CS70 wrote:You do need a small airplane hangar for that one, do you? :D

To address briefly the young chaps's ideas, and point in a direction.


The ovoid room, as it stands is a pit full of issues.

while the traditional linear modes are not present in the way you might expect, there is still a very significant resonance behaviour, and worse, you now have a very pronounced focusing effect , take a look at parabolic dish reflectors used on long range listening devices.... the dish looks somewhat like the ends of the oval.....

as a more budget friendly option to the TH rooms (a million quid a room so repute has it )
marginally more complex geometry than traditional recliner room shapes , need not be that hard , make the side walls splayed, such that any reflections are directed behind the mix position, , make the rear wall absorption , so that end doesn't reflect, do the same with the ceiling , pitch it so reflections head backwards, and you have then only two parallel surfaces, one of which is effectively non reflective as you've put a couple of meters of absorption material in front of it , with and air gap behind it. .. but keep enough live surface to achieve an rt60 around 3-400 ms as flat across the spectrum as possible.

scatter a bit of diffusion on the front wall in places to help keep a pleasant ambience, for conversation at the mix position.... but keep it far enough out of the way of the HF and Mid driver dispersion so as not to muck up the stereo image....

a few additional large absorption devices and bingo.... a workable, flat-ish response control room, with sufficient ambience to keep people comfortable and no excuse for too much reverb, (not everyone can make those mix choices irrespective of environment )

there's lots of way to skin the proverbial cat, but that set up , as practical compromises go, is pretty workable on sensible money and in something smaller than a 747 hangar