Print view
Customising, building or repairing your own gear? Need help with acoustic treatment or soundproofing? Ask away…
Post a reply
37 posts • Page 3 of 3 • 1, 2, 3

Eddy Deegan wrote:.....................
Oh, it turns out I may well be able to get the glazing in the velux windows replaced with acoustic laminated glass as well. This I've put on the back burner for now but will come back to later.

Good news that you could have an option on that, as a just in case.

Hope your back is behaving better. Here we've been trying to complete the re-cladding of an outbuilding before the winter storms really kick in, and moving a poorly placed pile of boulders that was blocking a gateway from one end of the croft to the other, so mine has been suffering similarly.

Looks like it's all coming together in the loft, Nice job! I'm enjoying watching the progress thanks for the updates.

Fishnish wrote:Hope your back is behaving better. Here we've been trying to complete the re-cladding of an outbuilding before the winter storms really kick in, and moving a poorly placed pile of boulders that was blocking a gateway from one end of the croft to the other, so mine has been suffering similarly.

Thanks :) ... I had to back off (hehe) for a few days during which I was rather 'crook', but luckily as I suspected it's nothing fundamental just the temporary aggravation of an old injury I suffered through youthful ignorance when I was extremely young.

Subsequent to the interruption caused by my back issues, I'm definitely on the mend and as such I've been pushing things forward as best I can.

My lovely wife put down some of the Green Glue joist isolation tape for me as I'm starting to have to juggle things around for the time being until the floor is fully laid: 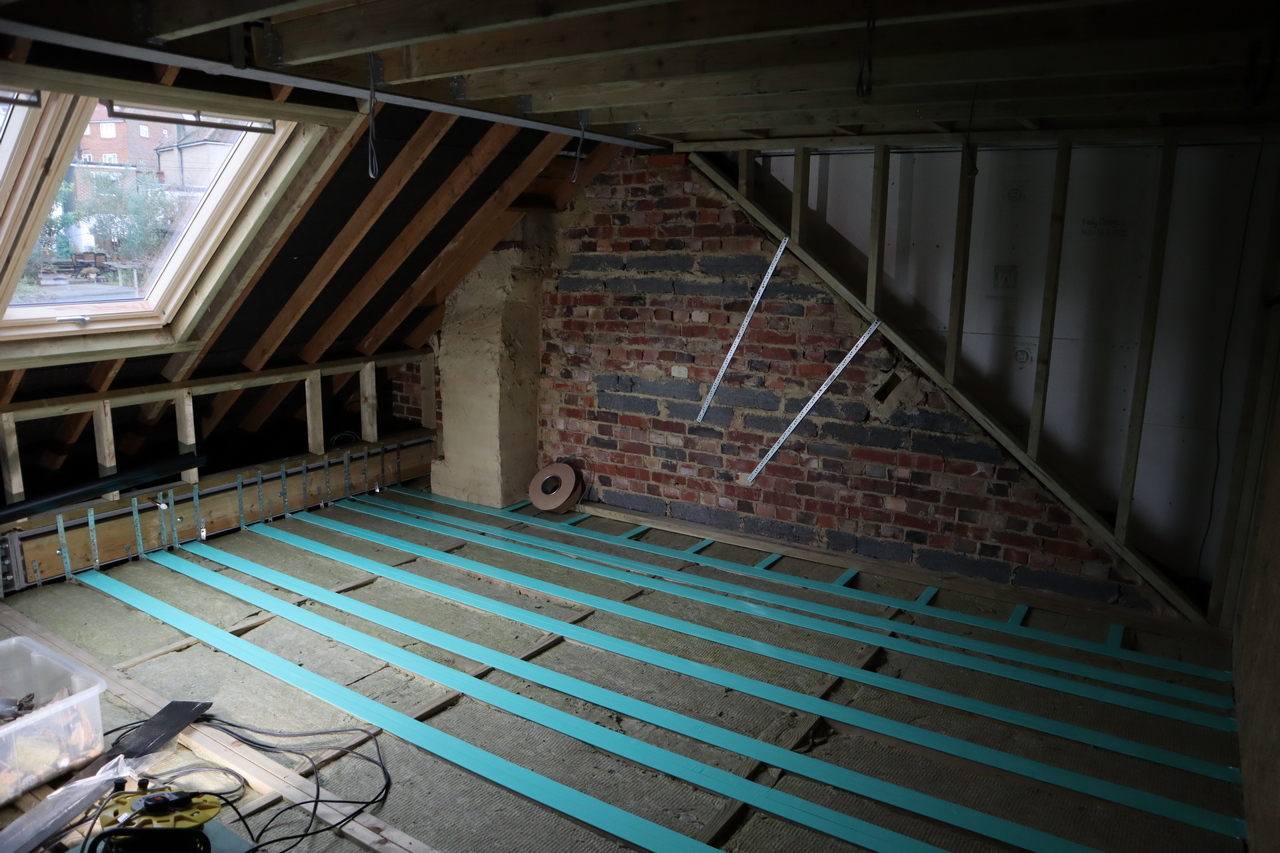 After the builders had cut it to size and left, I numbered each piece before commencing insulation as it would only reassemble in a specific order: 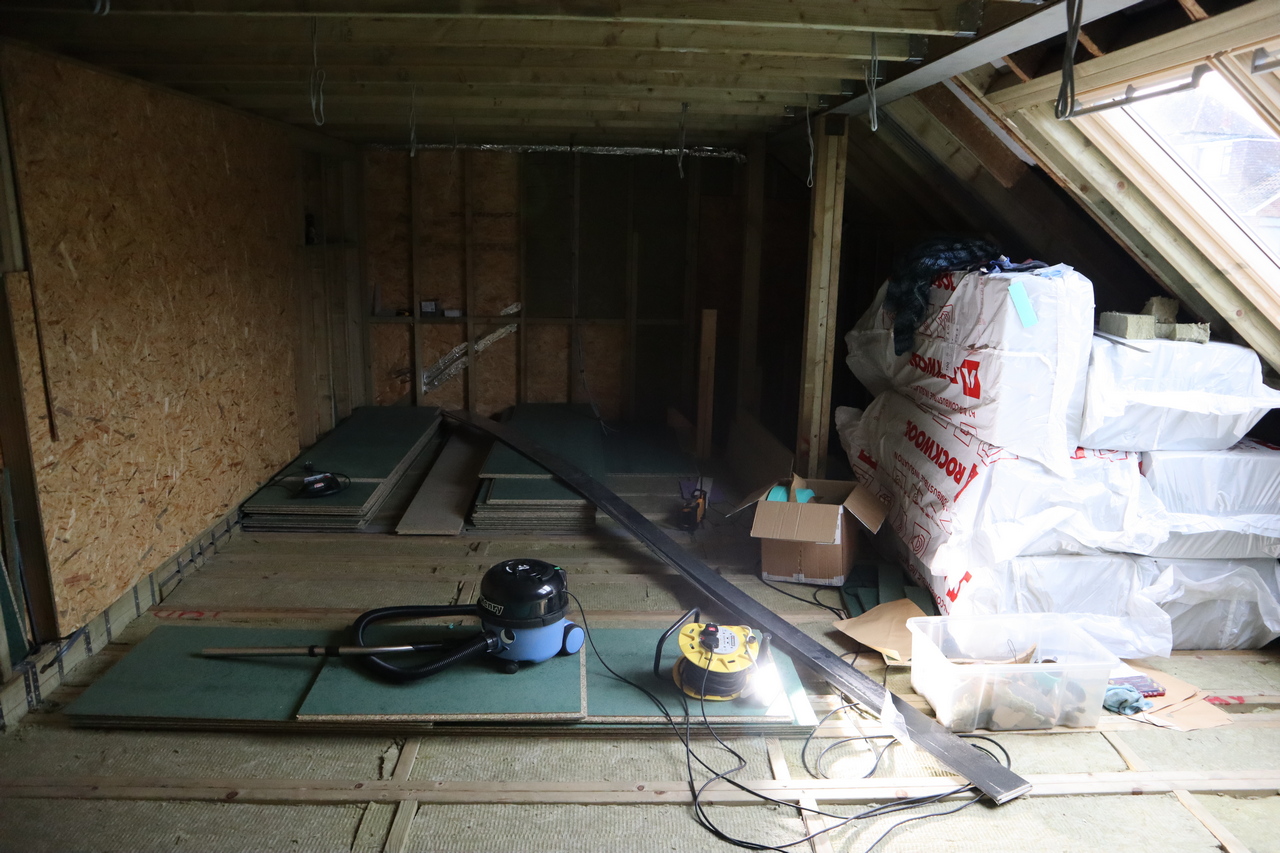 Today, in an hour's intermission between heavy rainstorms I managed to hop up on to the scaffolding and cut some 2x4 for the secondary stud wall at the party end, using the roof of the house as as saw-horse: 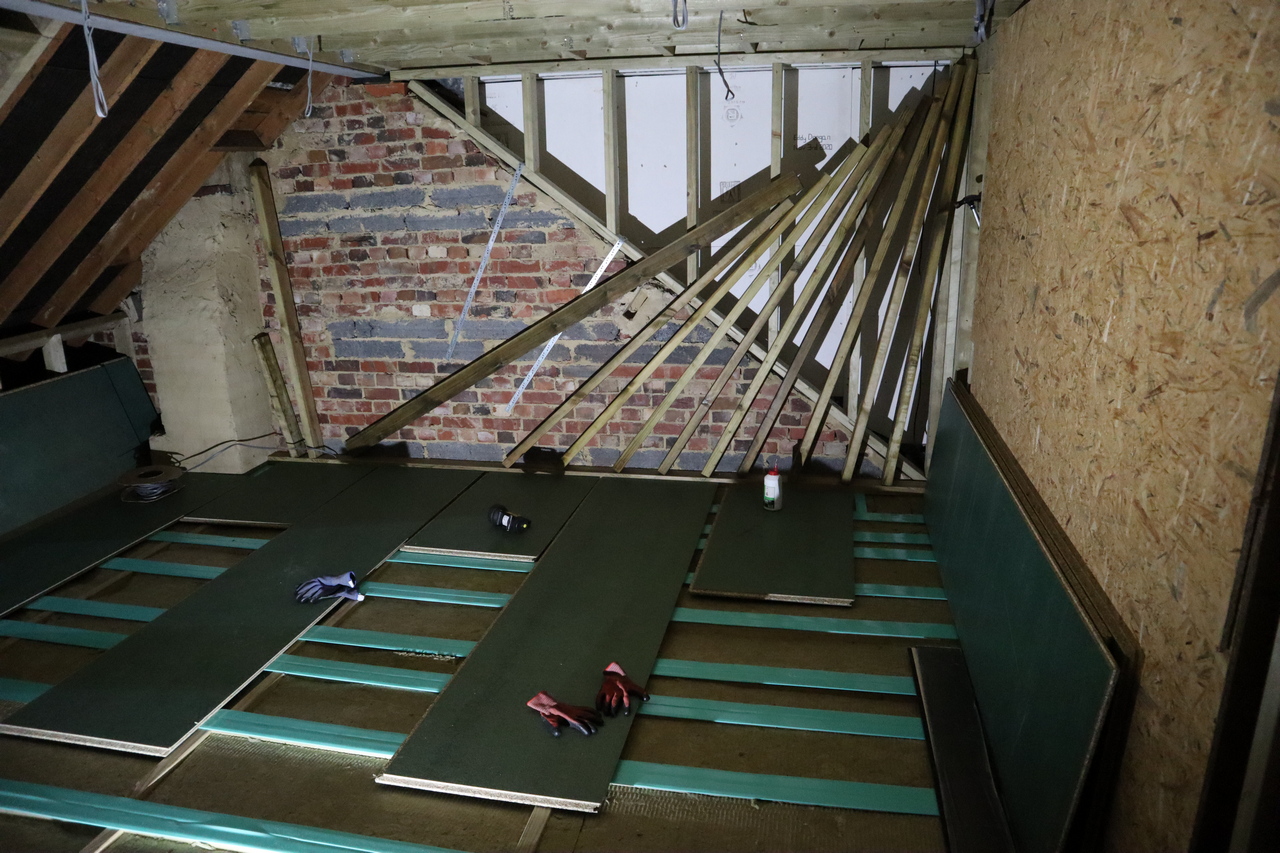 In the above image I've also extracted the party-wall-end sections of the flooring from the piles and laid them, albeit separated in the meantime (pending final confirmation from the electrician tomorrow morning that he won't need sub-floor access), for something to walk on as well as to start diminishing the piles of heavy boards that had accumulated at the other end of the room.

Finally, I've built the majority of the secondary stud wall which will cover the party wall. Tomorrow I'll finish that and do the studwork over the stairs, as well as start to lay the floor proper, which involves finishing the laying of the joist tape and glueing the boards on the floor to each other such that they are a coherent surface.

I'm also confident that there will be no need to screw into the joists at any point - the floor will be a 'floating plane' in that sense. 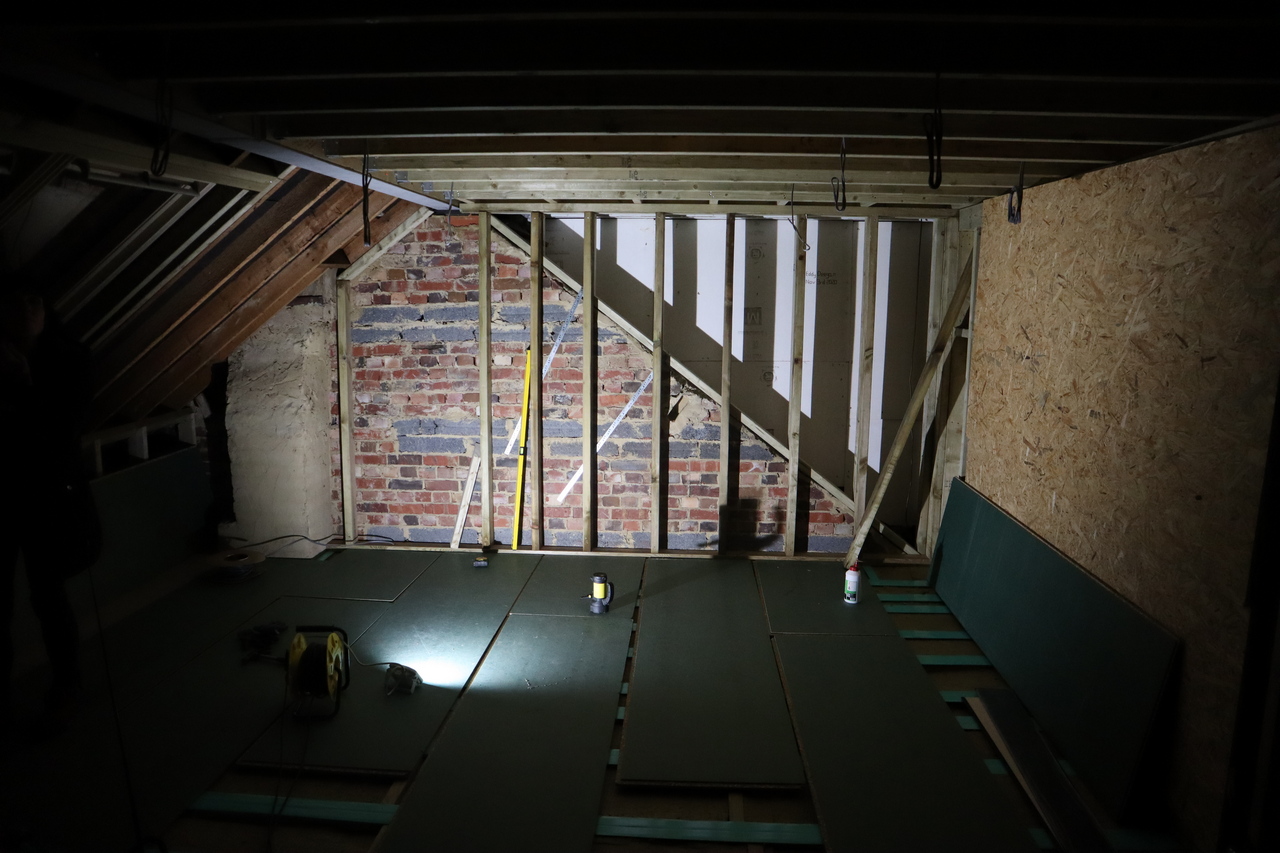 Out of shot I've insulated more of the vertical walls. I know this is all preliminary to the 'proper' studio work but as it's all the same project I'm documenting it from start to finish :-)

some built in bass trapping, fun angles, discontiguous floor!...problems to solve, and some pain because the gods like us to suffer for our good works. What more could you ask for?

As an interim update, I'm still working on the fabric of the space insofar as there is an huge amount of insulation ongoing which in conjunction with the aforementioned back injury (improving though it is) is proving time consuming.

However, things are progressing, in no small part due to my wife getting stuck in with gusto and doing many eaves-related things, which is brilliant as she is a 'proper grafter', getting loads done and significantly smaller than I am which facilitates under-roof matters considerably. On my part, the floor has been relaid (glued this time) over the rockwool and isolated joists... 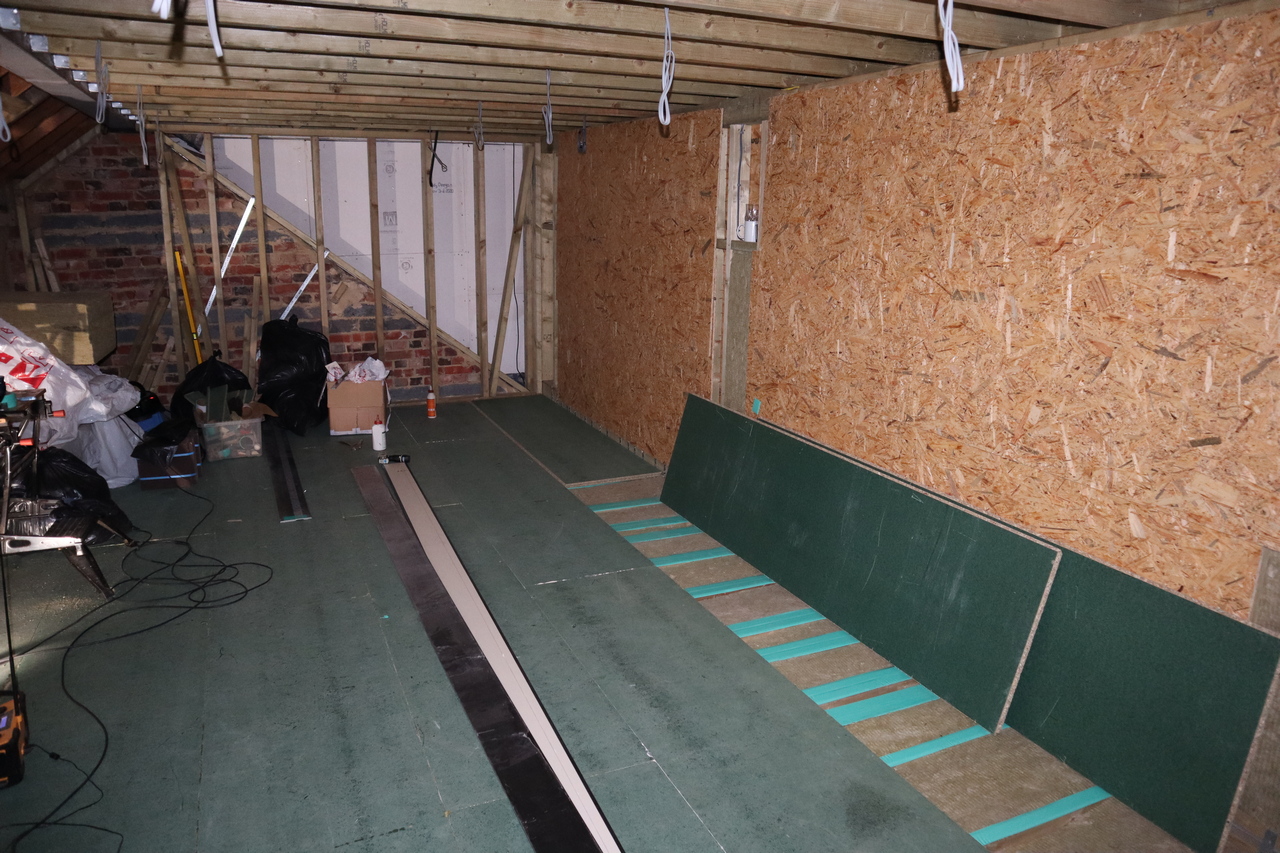 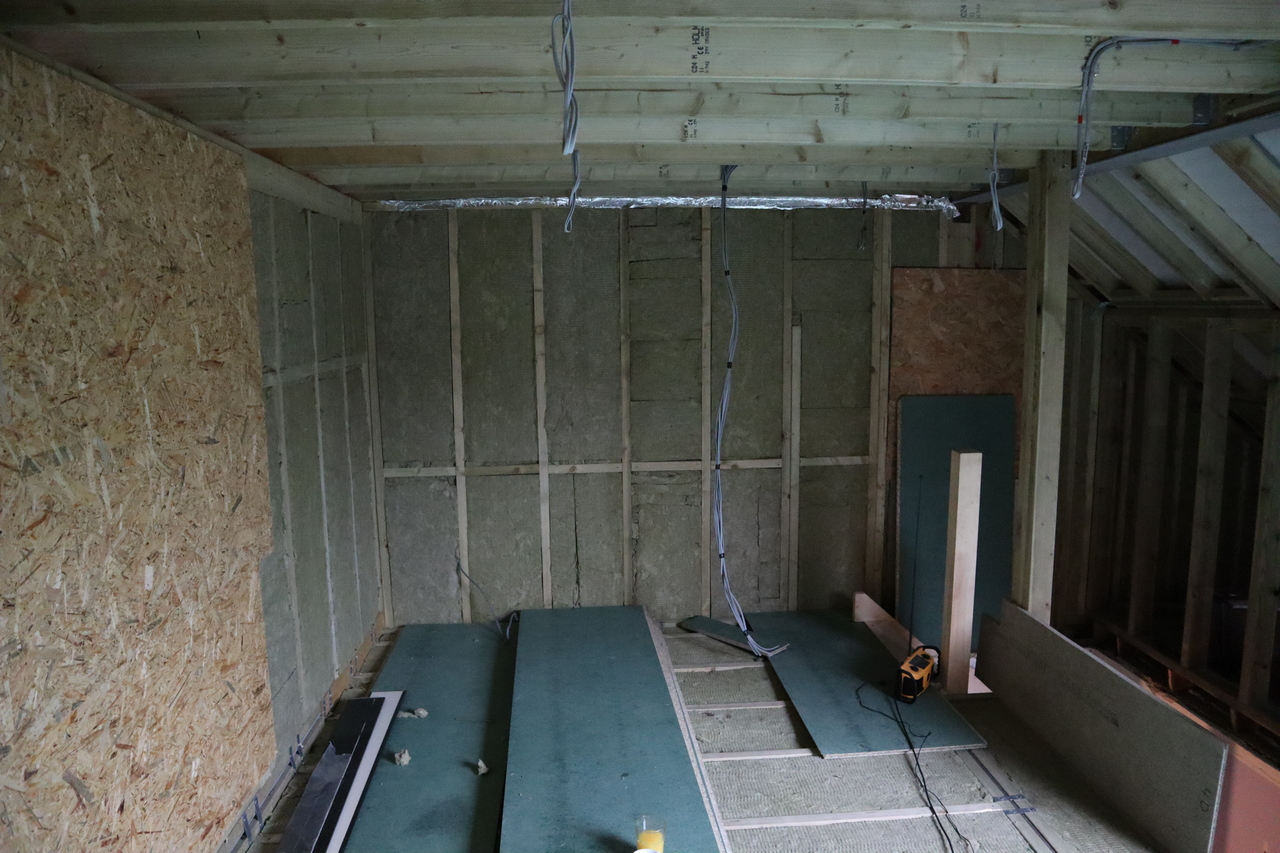 ... also on her part, the floor under the eaves has been completely cleared of the old cruddy insulation ... 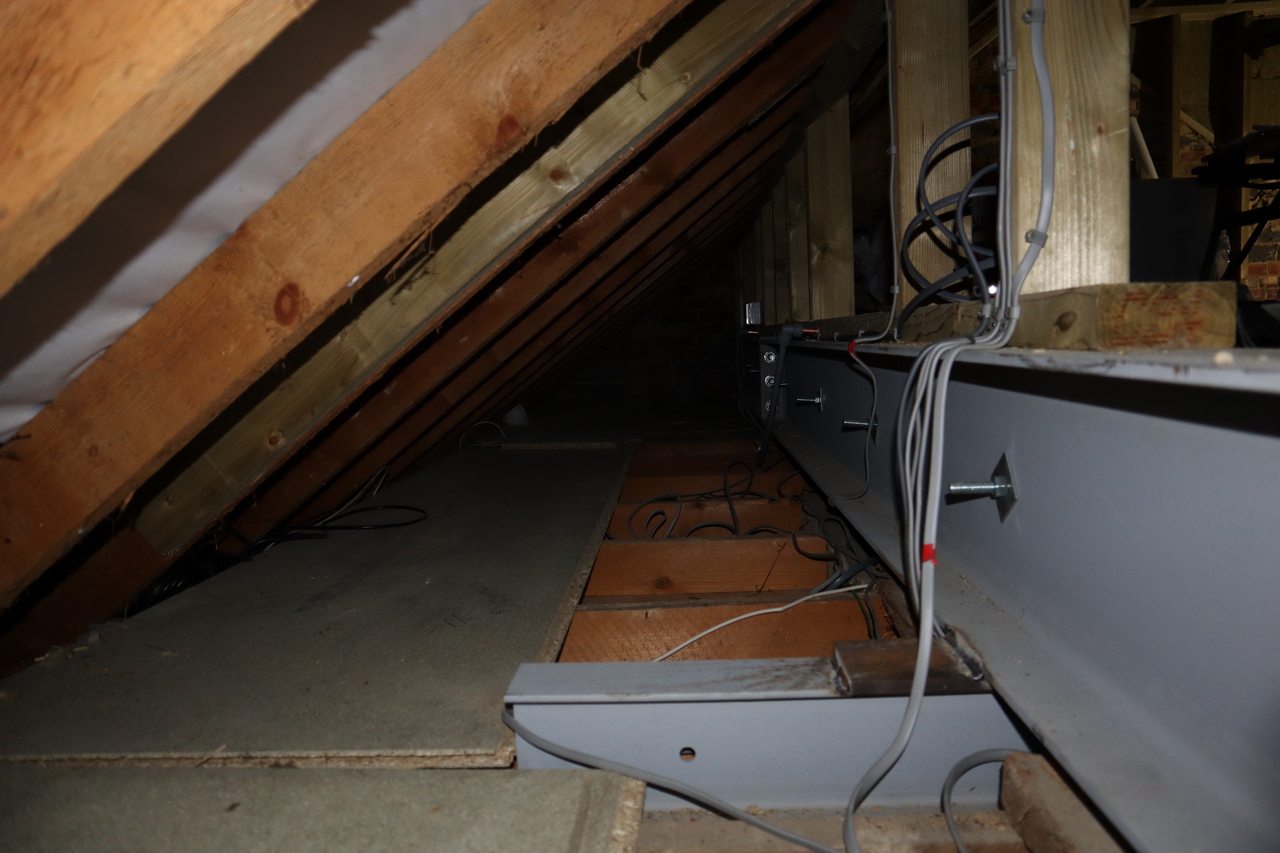 ... and she's rapidly installing rockwool, with a view to finishing tomorrow. 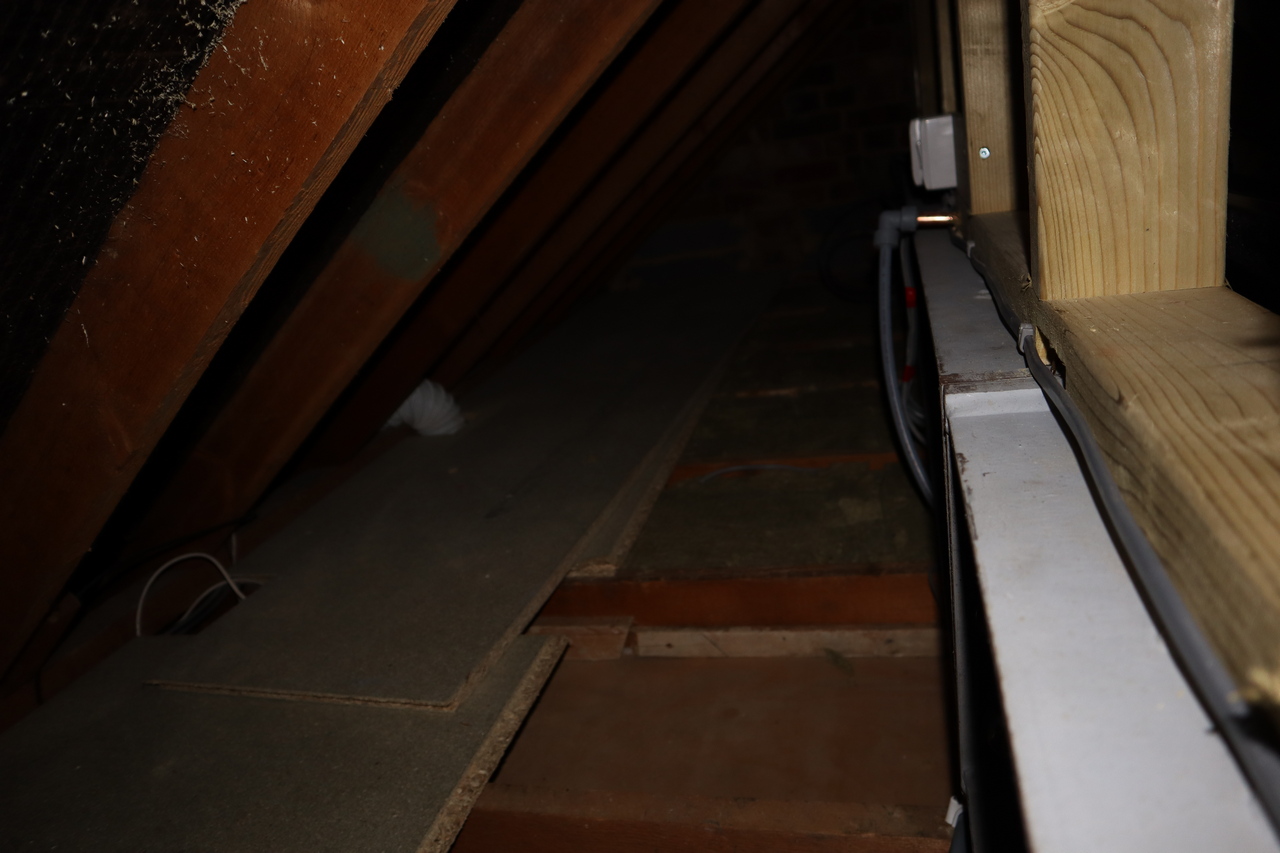 Back to my part; the rear-most stud wall on the party wall has been backed with breathable membrane and insulation has started on that also although I'm down to my last 2 bales and the eaves floor is taking priority.

Next up, and hopefully completed by the end of Sunday, is the the studwork over the stairs and the 'battening out' of the roof joists, which need thickening to accomodate 125mm of rockwool with a 50mm gap behind it.

This involves some logistics as there are stacks of 2-by-4 and battening on the scaffolding outside which need to be cut to length up high on the scaffold and shipped into the space via the window apertures so it should be a fun day, especially if it's raining :lol:

There is also some framing to be done in the access stairway. An order of acoustic and normal plasterboard will follow along with the resilience bars for mounting the former.

One thing I would mention for anyone doing the same or similar is that there is a slight vibration of nearby objects if I jump up and down in the center of the room. I weigh 17+ stones (107Kg/238lb) but I'd rather it wasn't there and if I'd known beforehand I'd have got the builders to sandwich some additional bars of steel between some of the double floor-joists. I can live with it.

Will - spoke to the sparky yesterday and he too recommended poking holes in the plasterboard for the lighting wires, so consider that a given (I was going to anyway in light of your comment). On a related note I'll also be creating some story-poles/strings for identifying locations of timber studs going forward.

The next order of rockwool and other supplies will be quite a big one, but at least there is a floor to put it on now.

Soldiering on and for any who are wondering, much studio-specific stuff will follow. This is all the foundational stuff, mainly concerned with soundproofing, which precedes talk of acoustic treatment/dispersion, ceiling clouds, bass traps and so forth ;-)

Wow, you two HAVE been busy - bravo the team! :clap:

On a related note I'll also be creating some story-poles/strings for identifying locations of timber studs going forward.

The way I handled this was to put marks on the walls lined up with the centers of the joists, then as you have a reference both sides of a board you can quickly do the edges. Snap a chalked string across when you come to the centers. It's remarkably easy to go out of line when you're looking up - especially with the full size boards.