I always think putting in the windows is the point were a building site becomes a house :thumbup:

Looking good Eddy - it is always great to be able to gaze at a view while working.

James Perrett wrote:Looking good Eddy - it is always great to be able to gaze at a view while working.

Cheers James - I'm not sure I understand the question?! In case it's relevant I'll not be buying the acoustic plasterboard from the builders supplier, I'll source that myself from somewhere yet to be determined but will be doing some research over the next 24-48 hours.

At present I'm still wading through the roof insulation and final framing, which between them will keep me occupied for a little bit :lol:

James Perrett wrote:Looking good Eddy - it is always great to be able to gaze at a view while working.

Cheers James - I'm not sure I understand the question?! In case it's relevant I'll not be buying the acoustic plasterboard from the builders supplier, I'll source that myself from somewhere yet to be determined but will be doing some research over the next 24-48 hours.

Yes, it was probably a rather obscure comment. I was alluding to the recommendation that the two layers should be of different thicknesses. Before I built my studio I seem to remember Max suggesting a layer of 19mm planks, followed by 12mm acoustic plasterboard then topped off with a layer of 15mm acoustic plasterboard with Green Glue between each layer. I saw a Gyproc application note which suggested two layers, using 19mm for the first layer followed by 12mm acoustic plasterboard for the second. I went for the Gyproc suggestion (albeit with Green Glue between the layers) with the idea that I could add a further layer of 15mm if I felt I needed more isolation. As it turns out, the two layers were sufficient for me.

Ahh, I see! Thank you for that ... I don't think I'll need the planking in my case but I'll certainly bear the recommendation about the differing thicknesses in mind while looking into it further. I'd already decided to use Green Glue :thumbup:

This weekend I've mainly been doing three things only. Trying to sleep, sleeping and installing Rockwool in the ceiling.

I'm pretty happy with the fruits of the last two days; the ceiling is now insulated with two layers of RW3 sandwiched tightly together. The top layer is 50mm, the lower is 75mm and there is an airgap (50mm at the side with the larger windows, ranging to double that at the ridge above the top of the Veluxes), above them for ventilation.

The remaining 6 bales (all of which are 100mm slabs) are for the sloping ceiling (pending battening out with 2x2 to get the required depth), the little wall separating the eaves from the acoustic area, the storage area and the framing over the stairs. I was going to really push the latter forward, as per a previous posted intention, but ended up focussing on the rockwool as the bales are quite large and working space is important. 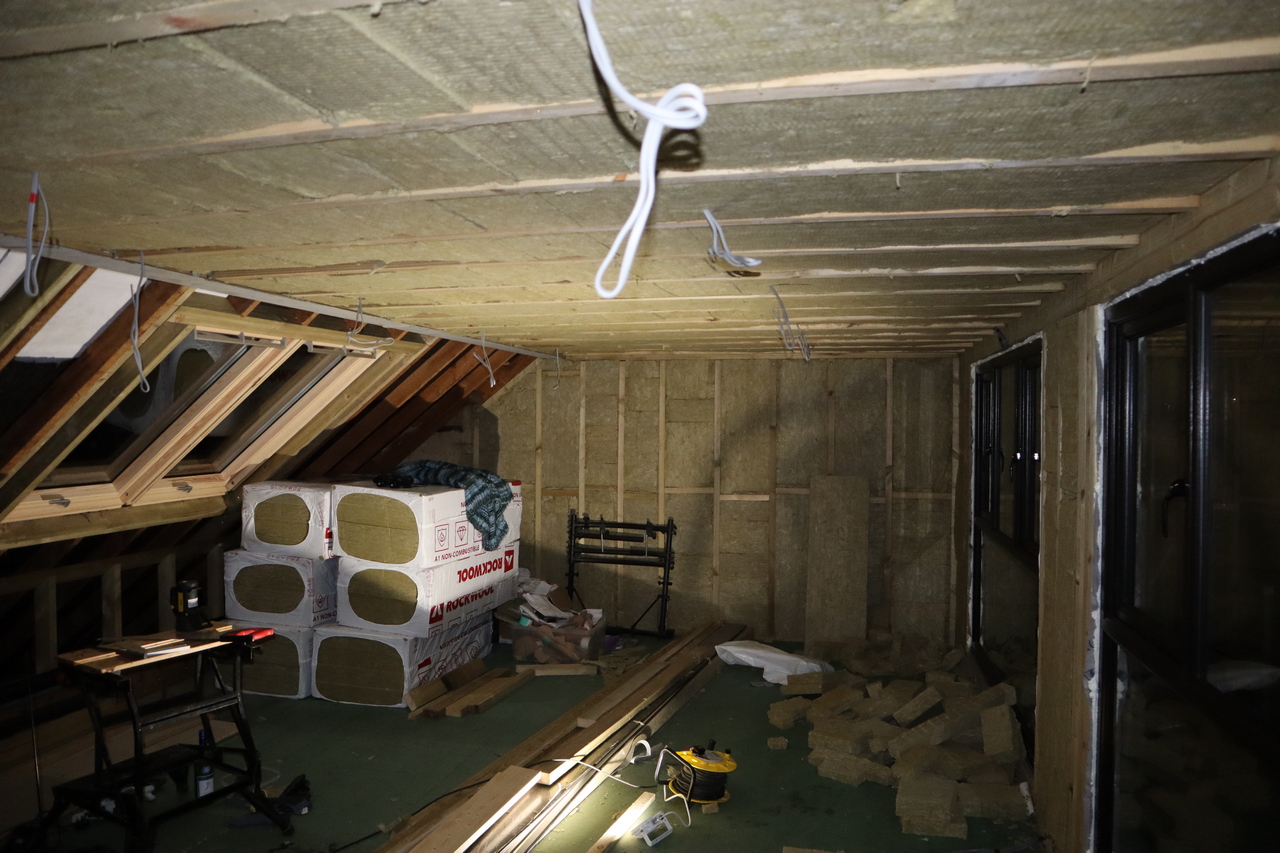 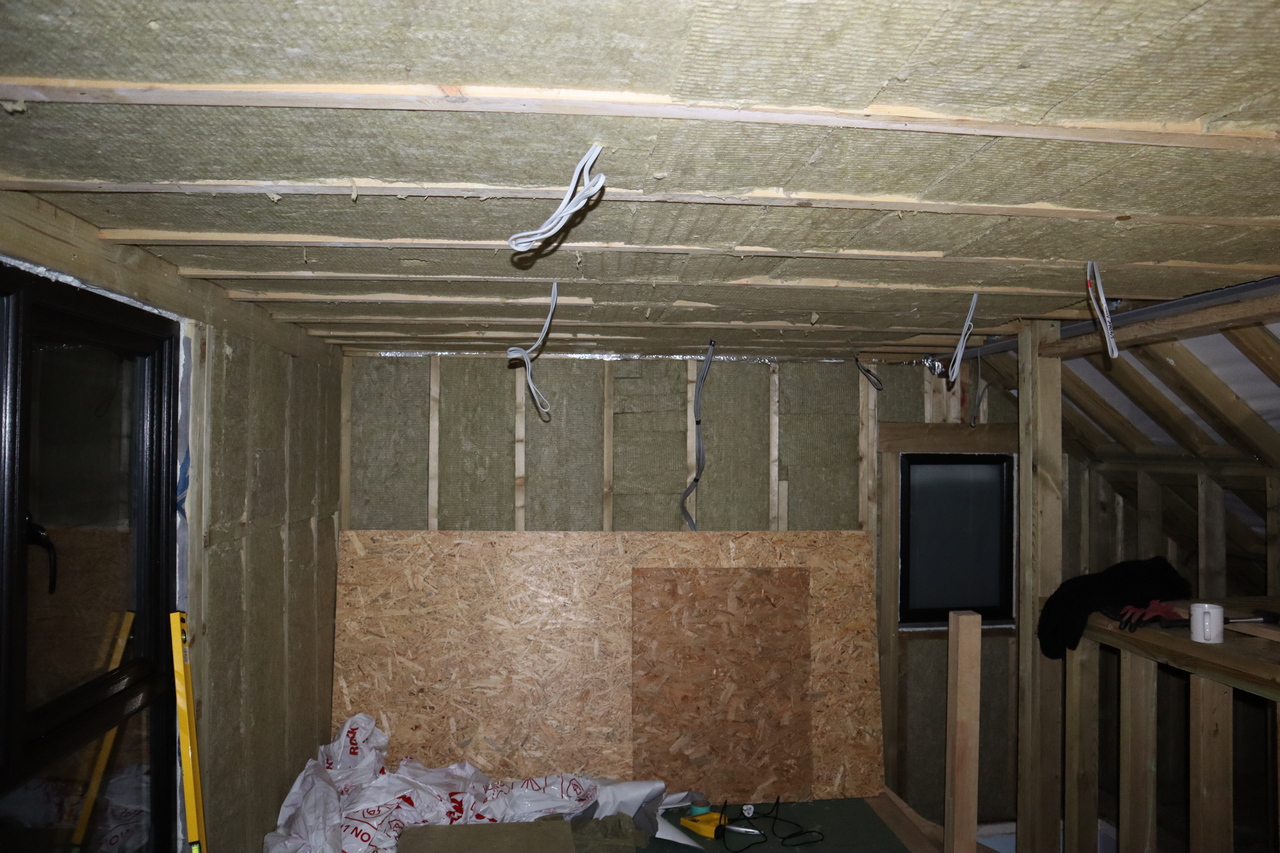 I still haven't done the reckoning for the plasterboard but I have been looking into it a bit and agonising over the various options. I think I've come to a conclusion which is a layer of 15mm Gyroc Soundbloc, a 12.5mm layer of same and Green Glue in the middle. This will all be mounted on resilience bars.

This is the result of mulling over various things:


Some measuring and reckoning to do in the morning, after which I'll order the materials and get on with framing while waiting for them to arrive.

Most, if not all, of the RW3 offcuts will be packed into the space between the left hand side of the chimney stack and the eaves wall (out of sight behind the bales in the first picture above), from floor to roof under the sloping ceiling. This will be contained in more framing, plasterboarded, and extend a foot or so further out from the chimney itself. There'll need to be a bass trap there anyway and it's not a usable space.

Fun fact: so far, the room has had 560Kg of RW3 installed and there is about another 120Kg to go.

One other tip - get yourself a board hoist if you haven't got one already. It makes life much easier. For example, the one I used looked like

although there are almost certainly UK suppliers of the same thing.

Definitely! I was pondering making something myself out of 2x4 which could lever boards up safely but the cost of a proper hoist is not prohibitive and will make things a lot easier :thumbup:

Luke W wrote: :thumbup: Centred marks on the floor and ceiling are always a big help. Screwing in plasterboard and feeling no resistance whatsoever is an annoying feeling at best...

Thats an encouraging stack of Rockwool as well, it’s all looking great, Eddy.

Cheers Luke - given that I'll be installing a completely new floor surface over the chipboard and given that the plasterboard (and subsequently the inner plaster skim) is going to take up some space all round I was unsure as to exactly how to preserve the timber locations but now that the windows are in, I can use the edges of the glazing as a fixed reference point for everything on the skeiling, long outer wall and non-party end wall from now on.

WIth regards to the plasterboard, I'll be putting that on resilient bars so it should be easy enough up until the last row of each board-run on any given surface. I'm within my comfort zone in terms of manual operations but I've never installed plasterboard before so I'll be measuring everything thrice, taking it steady and may even break out the chalk line :-)

Eddy Deegan wrote:Definitely! I was pondering making something myself out of 2x4 which could lever boards up safely but the cost of a proper hoist is not prohibitive and will make things a lot easier :thumbup:

Absolutely, they're so handy. Being able to get the boards up to height and then make adjustments to get them perfectly in place makes the job so much easier. I'd always taken a similar approach and used a few "T" pieces made from timber so the first time someone rolled in a proper lift was an eye opener!

Eddy Deegan wrote:I'm within my comfort zone in terms of manual operations but I've never installed plasterboard before so I'll be measuring everything thrice, taking it steady and may even break out the chalk line :-)

I find it pretty decent to work with in general. It cuts nicely provided you're taking a decent amount off, it can get a bit crumbly if you're trying to trim an edge down. That's usually avoided by the measuring thrice technique though. :D

Amazing work so far, it looks like everything is coming along really nicely. Those windows look great!

Known in the thread as a 'dead man' up here in the frozen North (I was sailing yesterday).

A taster of things to come ... 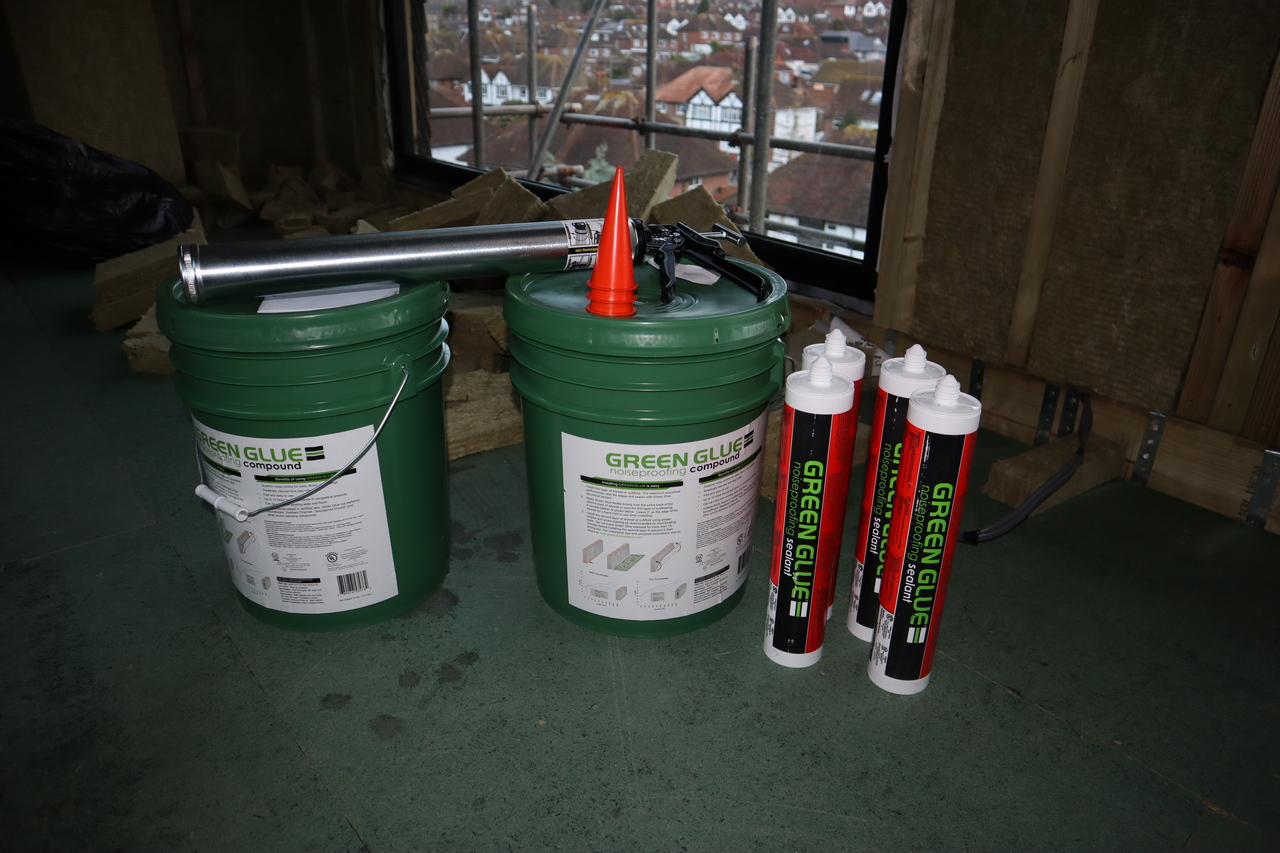 Plasterboard (both thicknesses of the acoustic board for the studio space as well as normal stuff for the stairwell downstairs) has been ordered and should be arriving Monday or Tuesday, all being well, along with Aluma-flex multifoil, Celotex for the eave storage space insulation and 2-by-2 for beefing out the rafters on the skeiling so that they can take 100mm RW3 with a 50mm airgap behind it.

My main concern now is how I'm going to transport the plasterboard from the drive to the converted roof space but I'll worry about that later and I expect it'll turn out to involve brute force and ignorance anyway :D

I'll be ordering resilient bars over the weekend (a little measure-and-math to do first) but for the party wall I'm thinking GenieClips are worth the extra investment for the additional 4-6dB ish of attenuation they give over the bars, so I'll be sorting that out at the same time as well.

I think that looks absolutely excellent - you've done a terrific job with the soundproofing, that's not going to bother anyone. :)
Well done and I look forward to seeing the completed room - what's the ETA on that?

The ETA on completion has been pushed back a few times, mainly due to logistics and work commitments but at present I think the end of January is around the right ballpark. 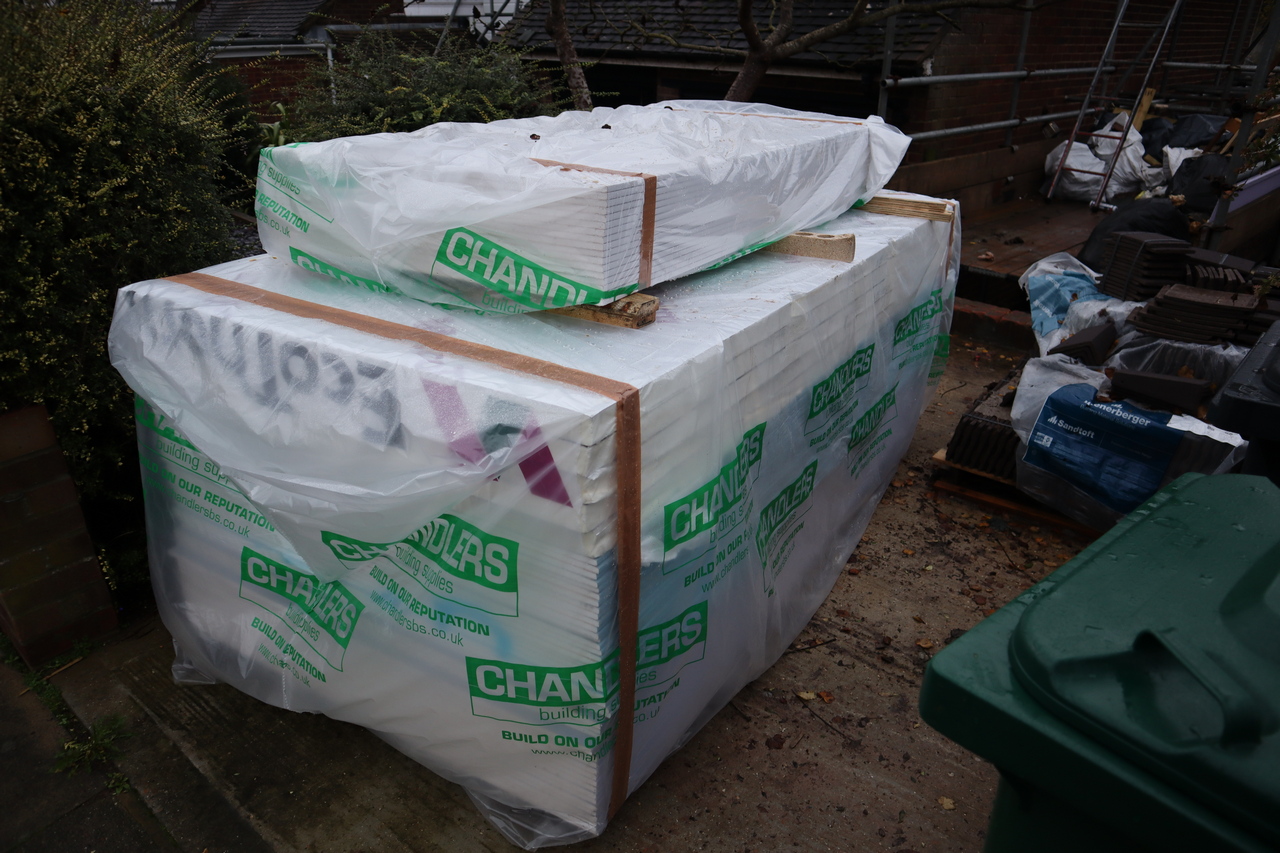 In the end I used Siniat GTEC DB board as I was able to get that at trade price through the builders who did the loft conversion.

Here is where I came to regret my somewhat casual attitude towards shifting it up to the second floor of the house. The normal plasterboard in the small pack on top (which is for cladding the walls of the stairs leading up to the studio, as well as for some of the non-acoustic storage space under the eaves) was easy enough to move, but the acoustic board presented an absolute nightmare for four reasons:


The weather has been very rainy for the last few days and there was a merciful break of a few hours yesterday so it was critical to get the problem solved there and then. I ended up phoning around some local 'man with a van' people until I found one who was willing to come and help.

With two of us on the job we got it done but it was brutal. Getting it up to the first floor landing wasn't too bad but the staircase leading up to the studio was really tough. The access currently looks like this: 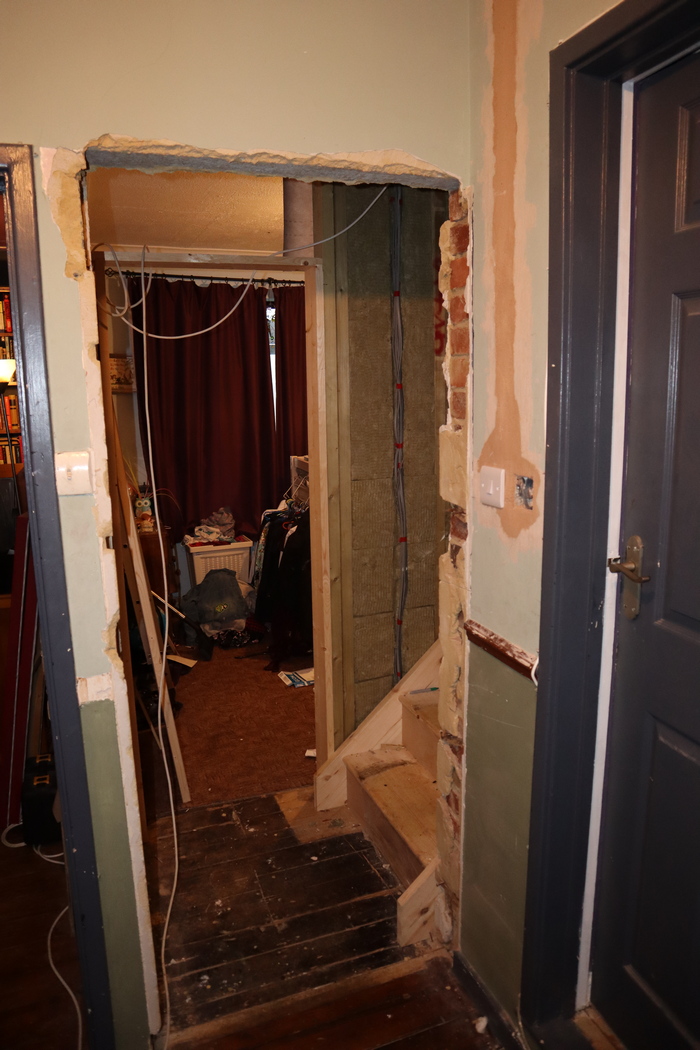 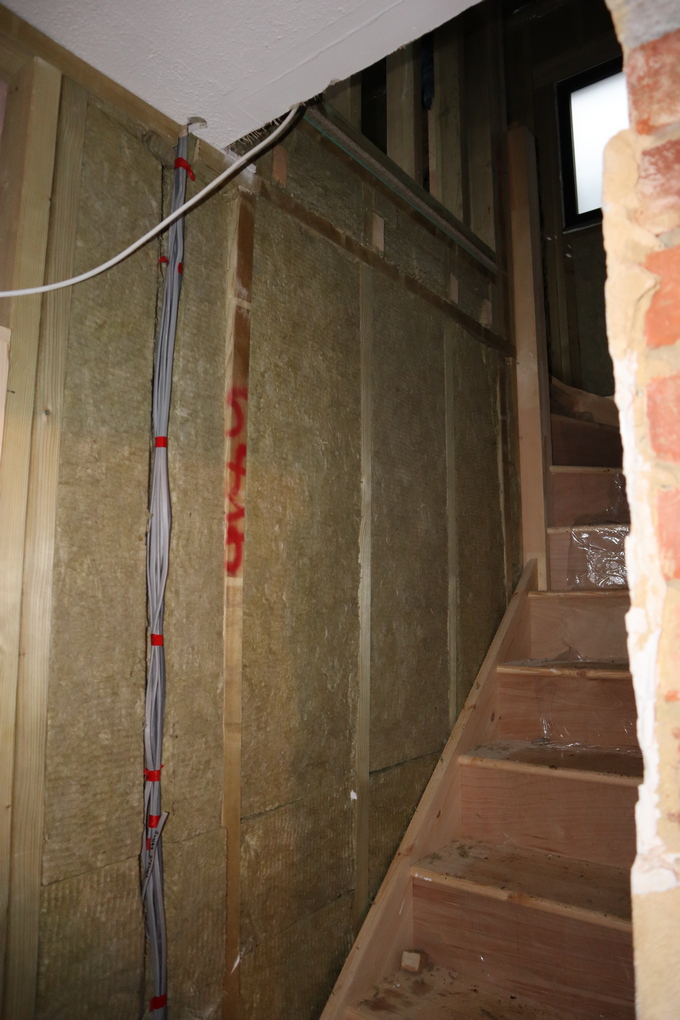 Navigating the 90 degree left turn at the top of the stairs was very difficult as each board had to be effectively positioned vertically just before the turn (there is framing over the stairs up to that point which restricts headroom) and coaxed around the corner with literally mm to spare.

Still, we persevered and about 3 hours later the room is stocked with materials once again: 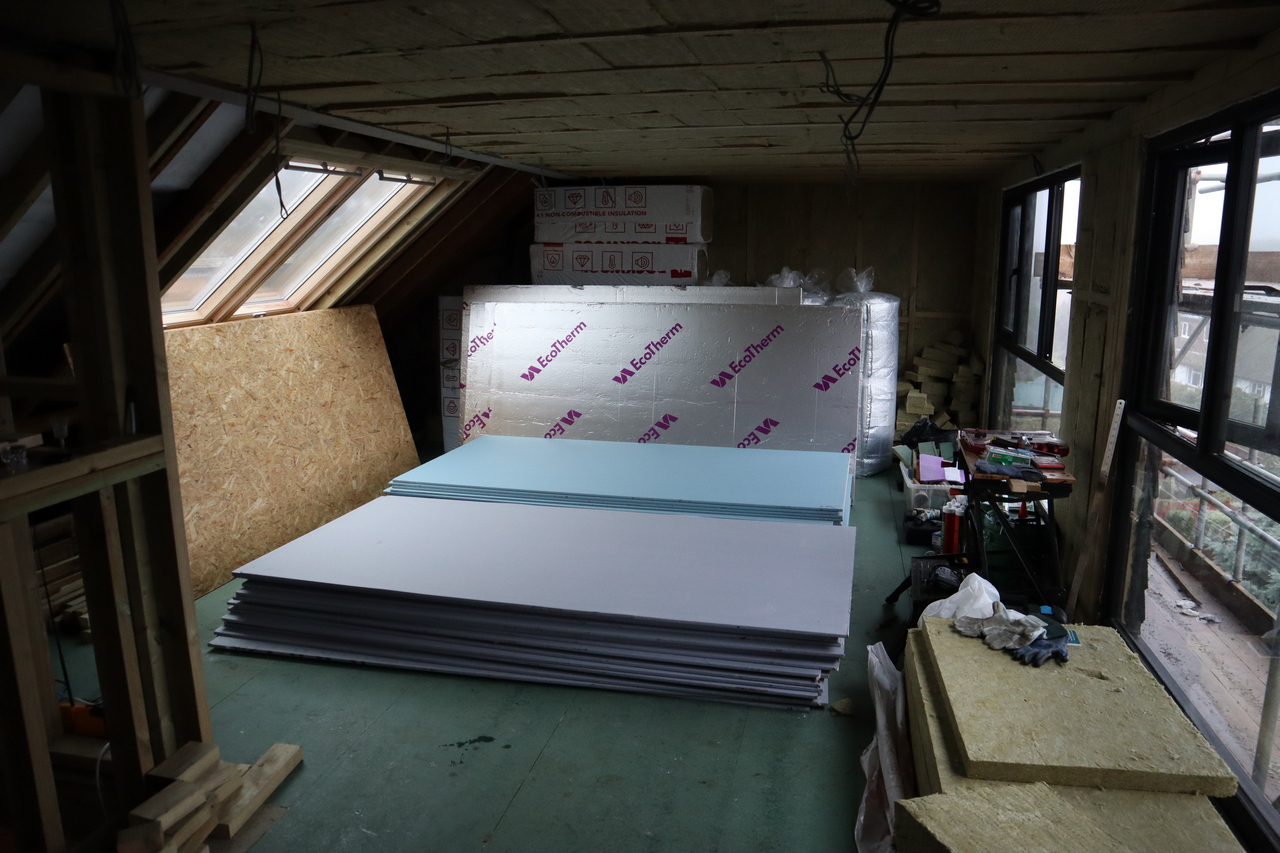 Those two piles have a combined weight of 1,458.5Kg :shocked:

One point to note for anyone doing something similar in future is that the 15mm board is too heavy to reliably support its own weight without support in the middle. We broke one board in half learning that! I can use it for the small wall below the skeiling though.

I'll be working around the boards for the time being while waiting for the resilient bar and genie clips to arrive, which will obviously be delayed over Christmas. Plenty to be getting on with in the meantime though: battening and insulating the skeiling, installing the aluma-flex, plasterboarding the stairway (and some of the room below) and finishing the framing for the door at the top of the stairs.

I ache all over today but no real damage done and it was totally worth it :lol:

{cough}You were warned!{cough}
Glad it only cost you one board though.