Folderol wrote:I was a bit concerned at first where I couldn't see any screw heads in the middle of the boards, but I could in the last pic...

I can see why that would cause concern!

Each board is about 195cm in height (cut down from the 2.4m they are supplied as) and is supported with 5 rows of 4 screws for a full width one, and 5 rows of 3 screws for anything in the half-width range. The inner boards are then obviously double supported as they inherit the same number of screws from the outer layer, so 40 screws per 15mm board.

The whole lot is hanging on about 20 screws per full width board attaching the resilient bars to the studs. Those are fat 50mm screws though!

Thanks Drew - if it looks half as nice as your gaff when it's done I'll be a happy man :thumbup:

This is off the hook! Nice, clean workmanship, well planned, great view. Living the dream! :clap:

Reat stuff! To answer the question about the colour of the boards...the grey stuff is the normal board, the blue is actually denser for sound-dampening so even better! There is green board also, which is moisture resistant and is usually fitted behind cisterns and sinks.

Plus, at work we would normally fit the ceiling boards first, so that when the walls go on they sit up tight to the ceiling for extra support purposes. But that is not a deal-breaker so all good.

The Culprit wrote:Plus, at work we would normally fit the ceiling boards first, so that when the walls go on they sit up tight to the ceiling for extra support purposes. But that is not a deal-breaker so all good.

That's the way I was taught as well, and have always done it like that when working on general building. But when you're going for isolation, it's actually better to not have the two touching at all, and fill the gap with a caulk/sealant that retains some flex once it sets.

The Culprit wrote:Plus, at work we would normally fit the ceiling boards first, so that when the walls go on they sit up tight to the ceiling for extra support purposes. But that is not a deal-breaker so all good.

That's the way I was taught as well, and have always done it like that when working on general building. But when you're going for isolation, it's actually better to not have the two touching at all, and fill the gap with a caulk/sealant that retains some flex once it sets.

The Culprit wrote:To answer the question about the colour of the boards...the grey stuff is the normal board, the blue is actually denser for sound-dampening so even better!

This got me ferretting down a rabbit hole a bit today as I'd definitely ordered acoustic board rather than normal!

Interestingly, the 15mm grey boards I have are marked "44KG" on the back. Although the printing on the edges looks more like 'GB' than 'dB' they are clearly denoted as GTEC dB boards on the rear printing. They are definitely a little different to the blue ones in that they have more flex to them but are noticeably heavier!

So I'm not quite sure exactly why my grey ones are grey, nor can I find an exact match for them on the Siniat website, but they seem to be the right sort of stuff :thumbup:

In the meantime, out of curiousity I picked up the phone and called the manufacturer. We had a nice conversation, I've sent them some photos of the legends on the grey boards and they're going to get back to me to clarify exactly what they are. They didn't rule out a manufacturing glitch as it's not unknown for boards to be produced in the wrong colour on occasion apparently.

I must admit that I was a bit surprised to see the grey boards there Eddy - hopefully it is just a manufacturing glitch.

I'm confident that these are OK to use but I'll be interested to see what the manufacturer comes back with. Here are some of the legends on the back I was referring to, in case they ring any bells to someone who knows more than I do: 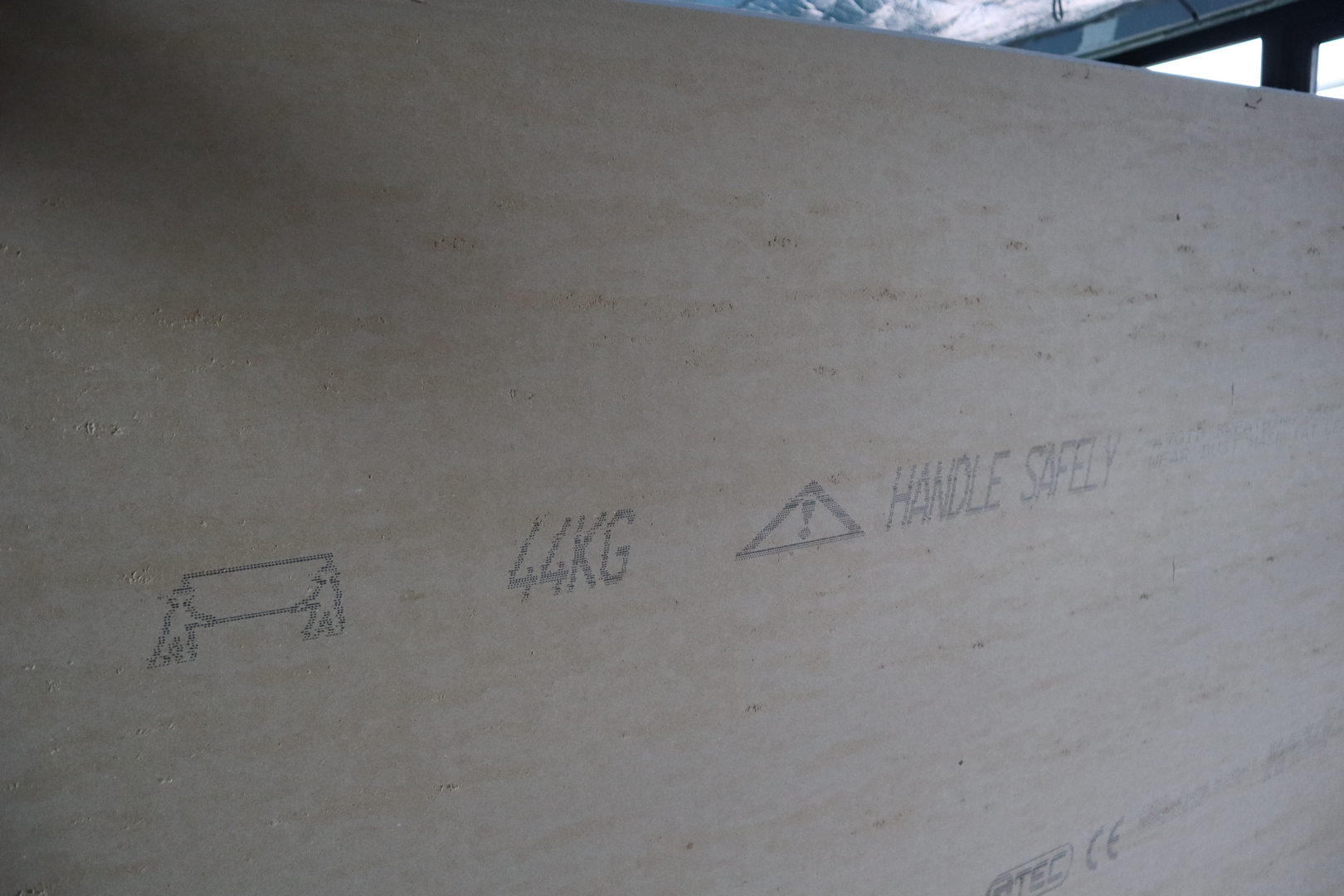 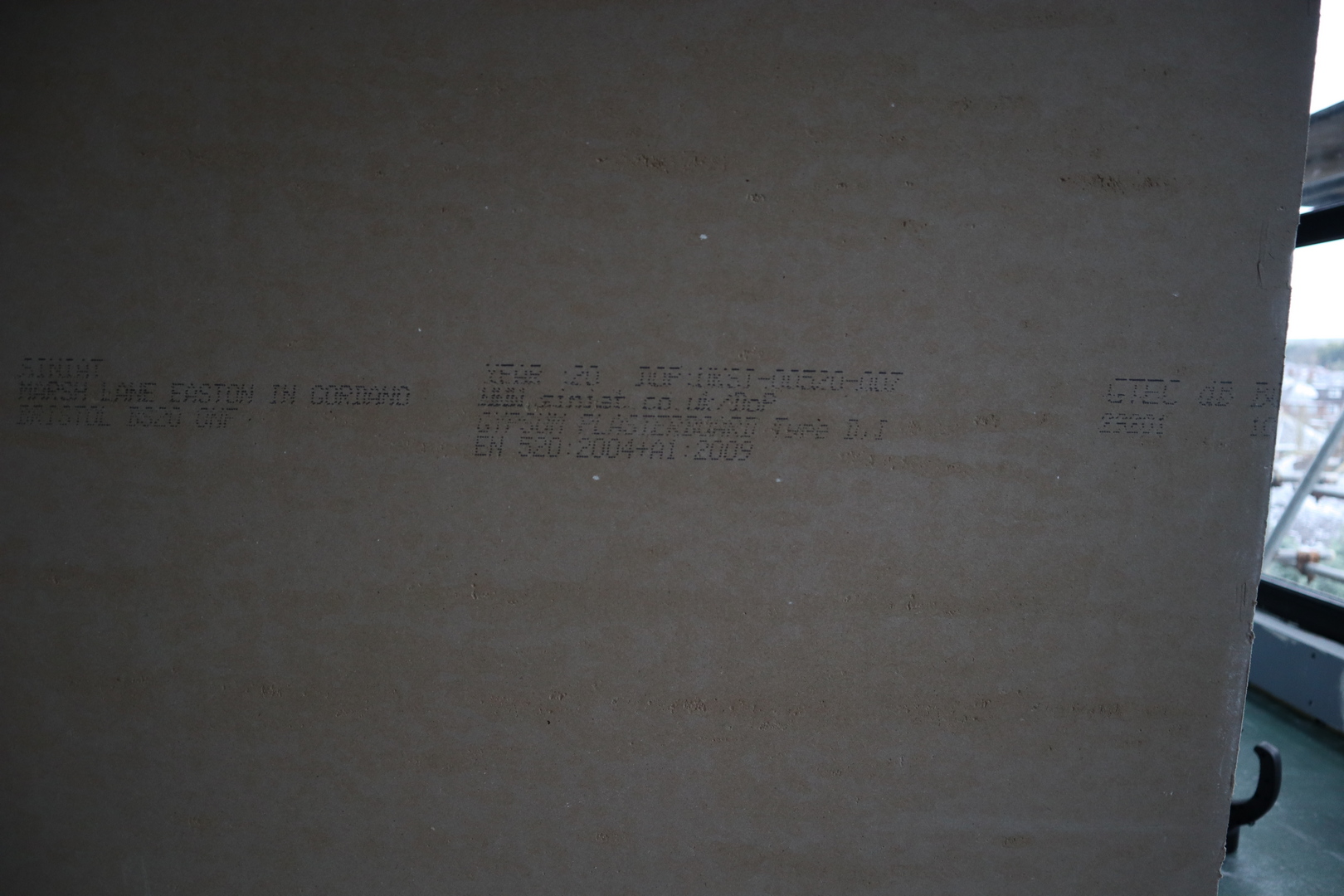 As it clearly states 'GTEC dB' at the right in the second image, and as the board is at least as heavy, and seemingly heavier, than the blue equivalents I'm not overly bothered but it would be good to identify it precisely, even if that turns out to be a manufacturing glitch.

If they put the wrong facing paper on it then maybe could explain why they are more flexible than the blue and why one of them broke when picked up flat by the ends, although it seems fine in shorter spans. I'll compare the information on the back against the blue ones this evening as well.

I'll report back any updates I get from them in due course.

Edit: I note the 'DOP UKSI-00520-007' on the back. Putting that into the Siniat DoP (Documentation and Policies) search engine results in this document which identifies it as GTEC dB board, so given the weight of it I think it likely that they put a grey face on it by mistake.

It is looking like there's nothing to worry about but definitely best to make 100% certain. Fingers crossed Eddy!

In most projects there are unexpected time-sinks, or at least things that take a lot longer than you think they will and in my case on this build one of those things turned out to be the non-acoustic plasterboard in the stairway and the small landing enclosing the doorway at the top of the stairs.

Apart from the fiddliness of some of the shapes involved, the alumaflex multi-foil insulation was something of a challenge. Alumaflex consists of 14 thin layers of foil, foam and fibres and on the face of it doesn't appear that much of a problem for screws.

However, when screwing plasterboard to studs/joists through alumaflex the fibres in the alumaflex bind tightly around the screw and in some cases where I'd missed the woodwork slightly (which is easy to do as the alumaflex doesn't give much away as to what lies beneath it and the RW3 insulation between the studs is resistant enough to exacerbate that problem) I was forced to resort to grinding the screw off flush with the plasterboard with a Dremel as retrieving it from the grip of the alumaflex was simply not possible.

It doesn't help that the building regulations require an overlap of 70mm wherever two sheets of alumaflex meet. This results in a thick bulge of the stuff which is a nightmare to work with/around.

After a few mishaps along these lines I had a rethink and ended up installing 25mm battens (attached with 70mm screws that the alumaflex had no chance against) over the alumaflex such that I could screw the plasterboard direct to those battons.

This took a while but the result was a much easier time of it when installing the plasterboard. Thus after a few days work I've now got all but a tiny bit of the stairway and upstairs landing boarded in readiness for skimming.

I also boxed over the wall cavity exposed by the cutting of the stairway through the bedroom below, as shown at the bottom of the following photo: 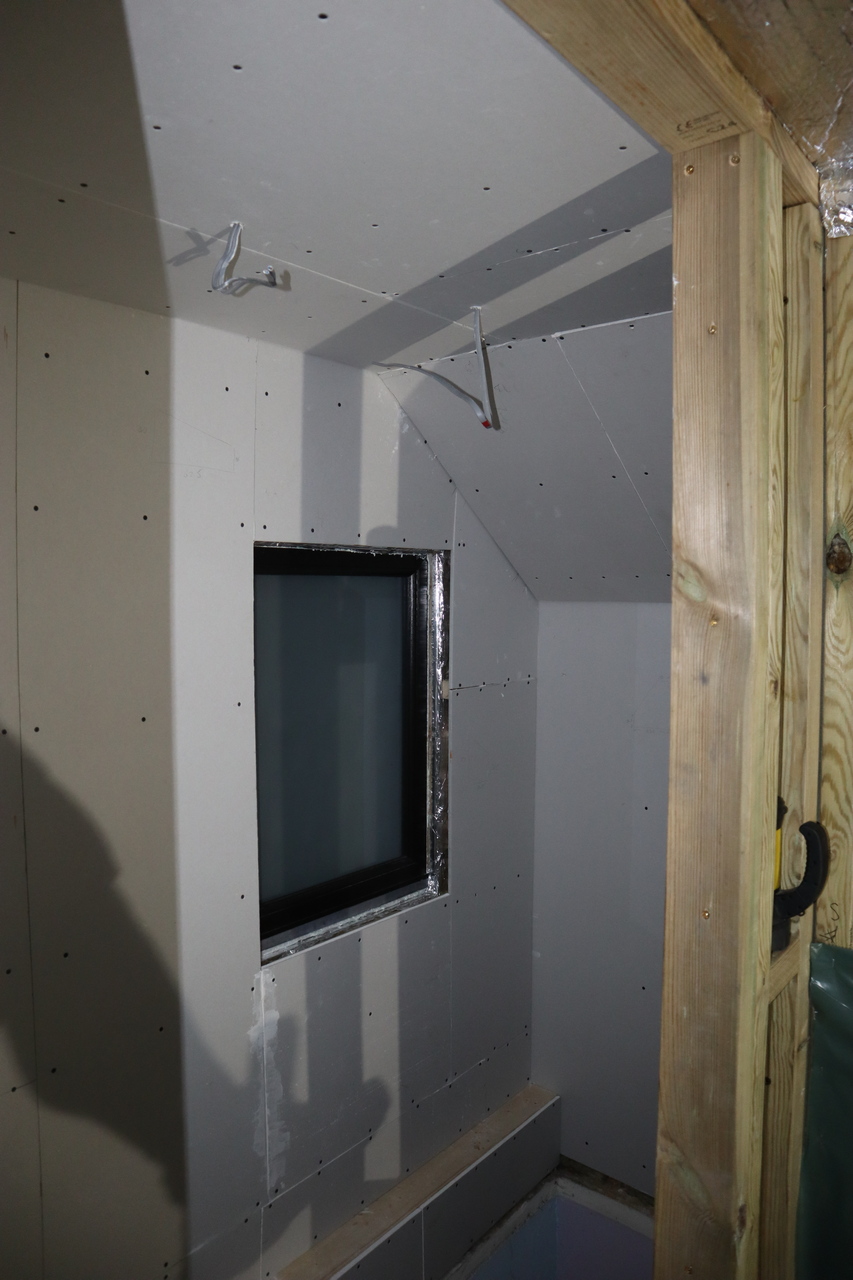 The plasterer I've engaged, (who will be starting a week from the time of posting) has assured me that any gaps of 5mm or less between boards are of no concern and do not need filling although I have used a bit of it here and there for my own peace of mind. He'll also be adding various corner meshes and other re-enforcements in key places where the geometry of the construction benefits from them and as such I was able to stop spending so much time on every millimetre!

He's also going to handle the larger joins between old walls and new, as well as fill in a handful of old switch-socket holes in the walls downstairs from the old electrics. 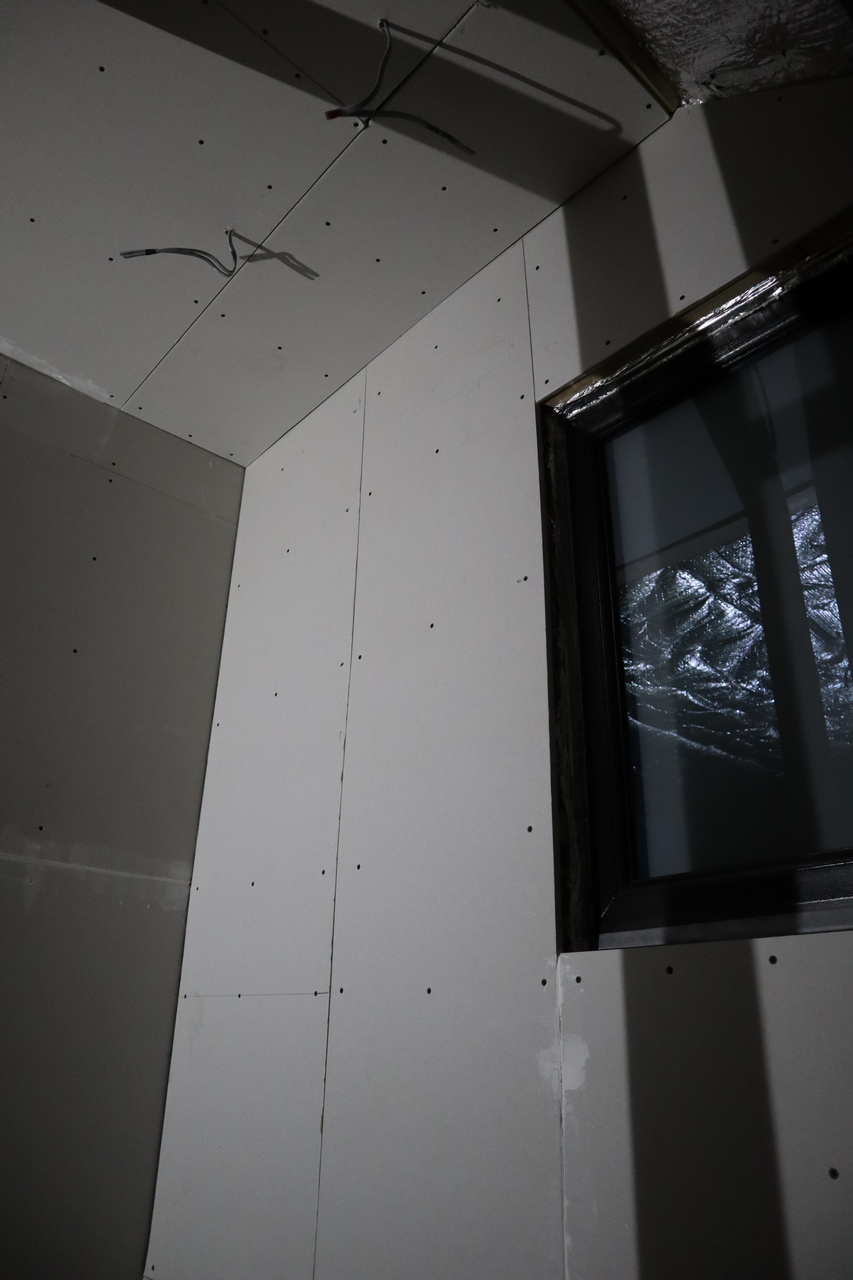 View from half way up the stairs: 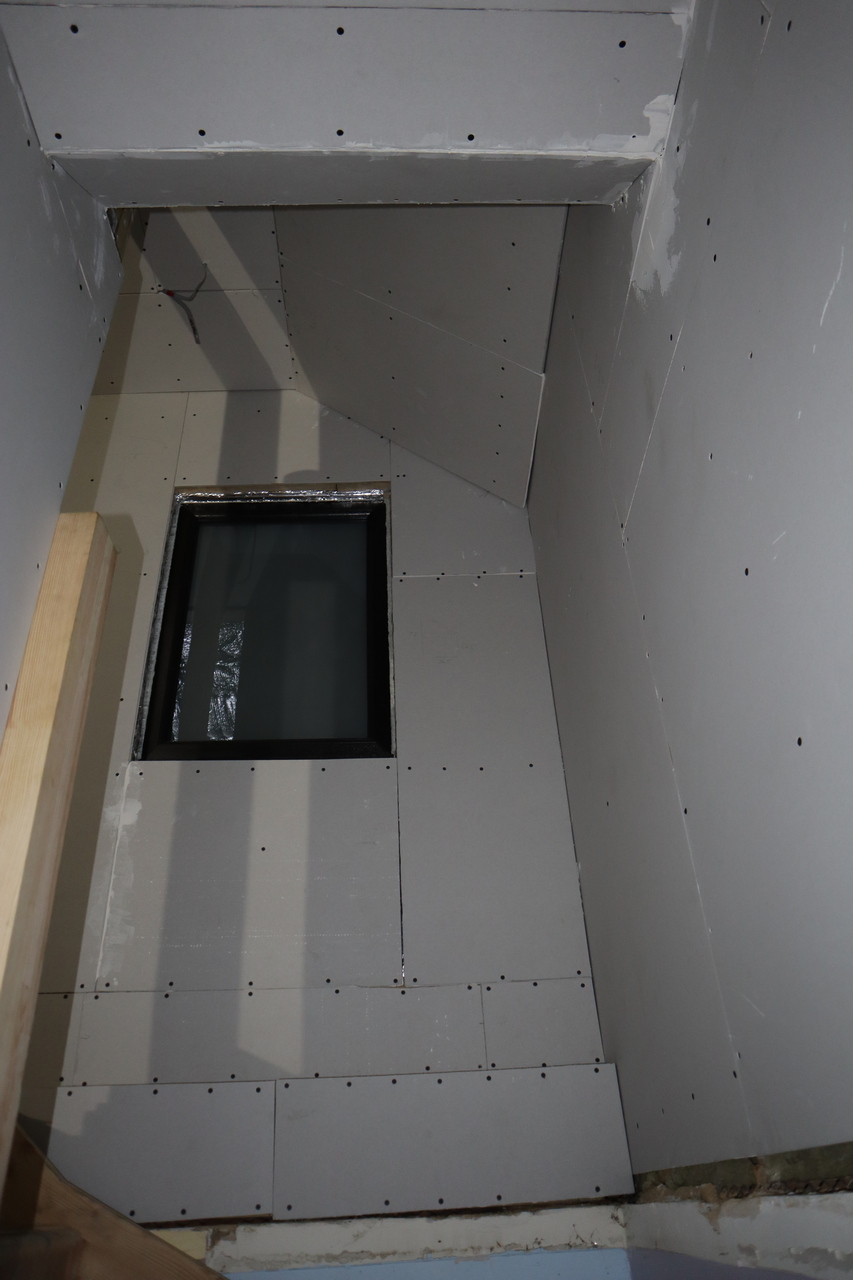 This is the cupboard space over the stairs in the process of battening and boarding (non-acoustic - the double plasterboard will be on the doors yet to be constructed) ... 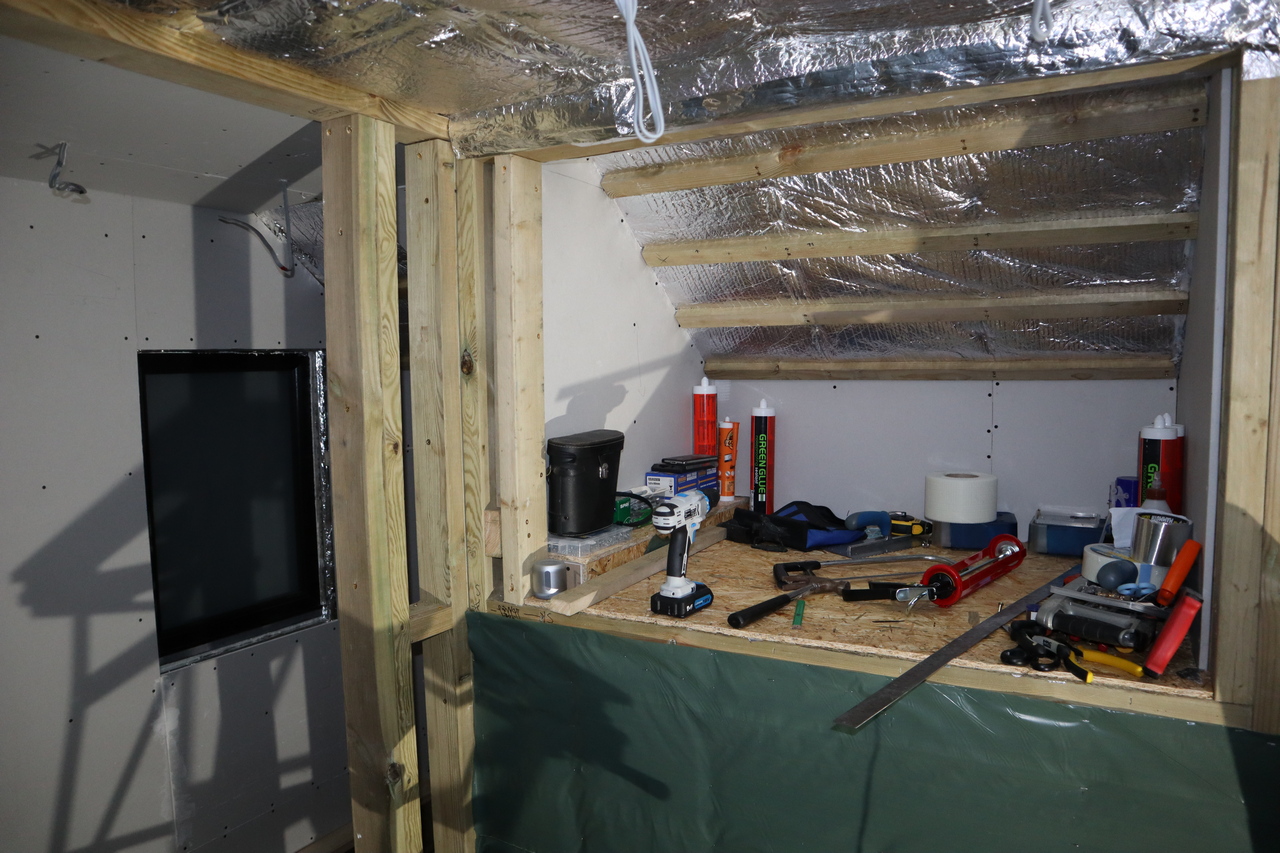 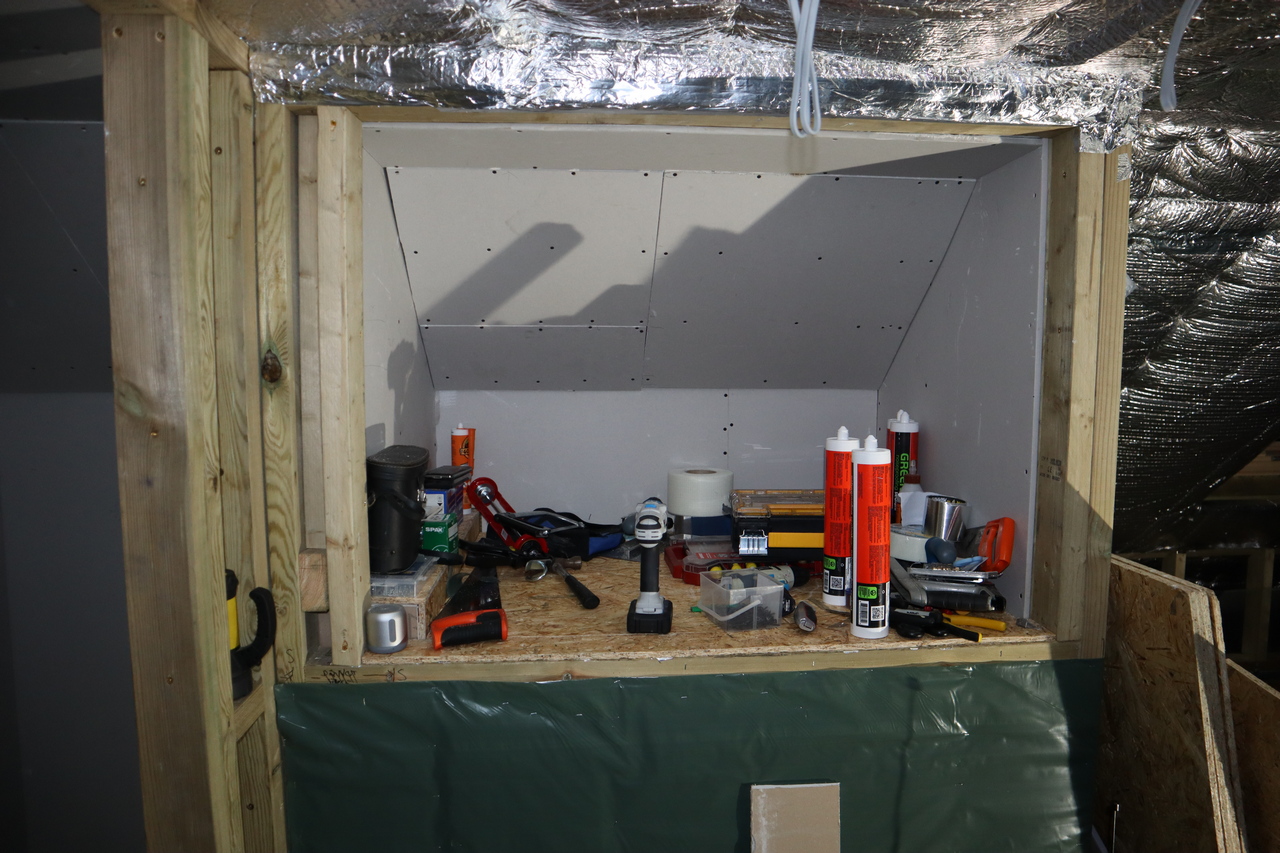 Finally for this post, although it's been mainly about the boring peripheral shizzle, I've also added the final layers above/below the windows in the acoustic space and the window fitters have installed some pine sills. 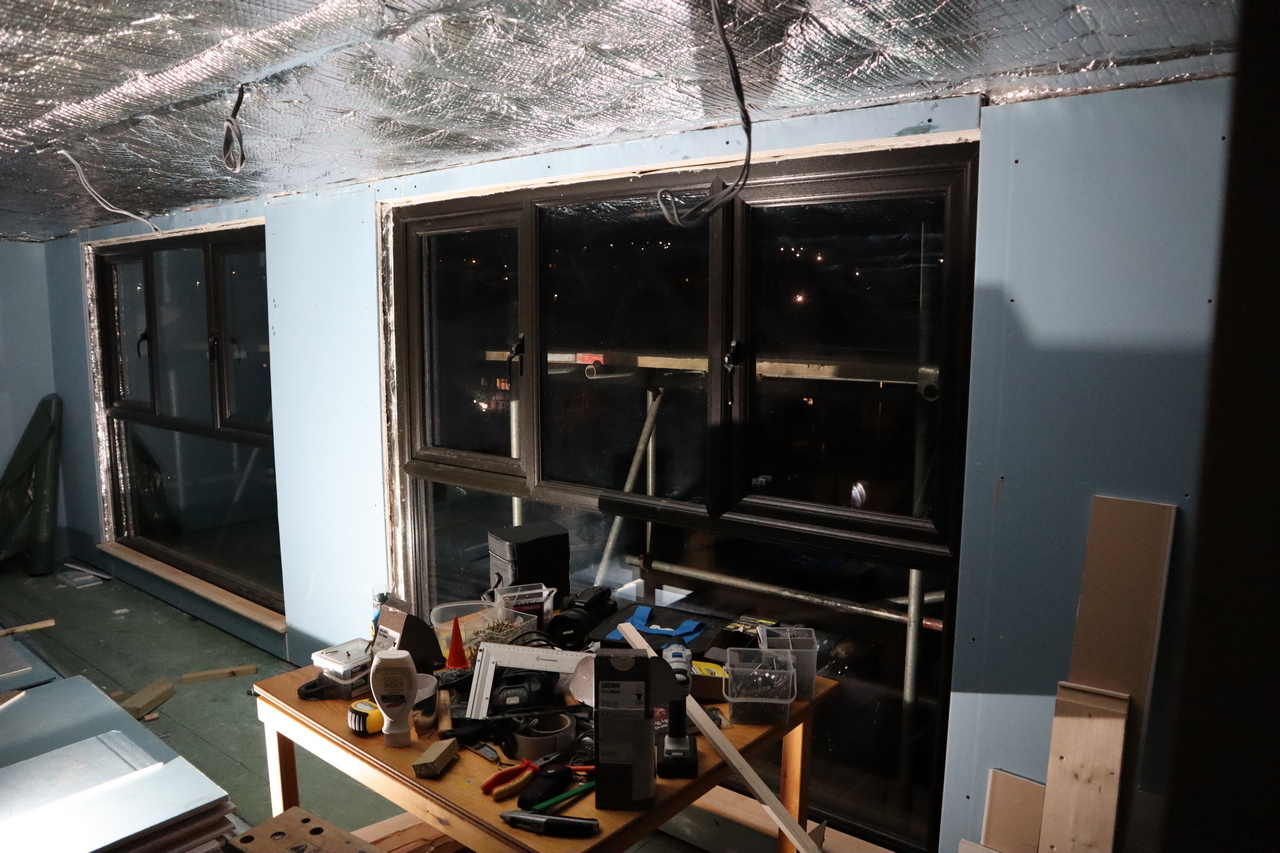 As I mentioned before, the horizontal strips above and below the big windows are triple-layer plasterboard with green glue in between them as opposed to the double layer on resilient bar in the floor to ceiling sections. In case anyone noticed, the little infill bit at the top of the section between the windows is to correct a measurement mistake, is screwed and green glued to the plasterboard layer below it and merely serves to add mass; it will be completely covered by the ceiling board.

I've spoken to the plasterer and will be getting this wall skimmed (subsequent to the stairway which will be done sooner) in such a manner as to maintain the gaps between the resilient bar sections and the triple-fixed-layer sections. The final internal window trim (I opted for the black finish to the full thickness of the wall) is also pending on completion of the skimming.

Not in any pictures here but I've also installed a couple of sheets of non-acoustic board in the storage space in the eaves. These are not installed on battens as I really want to squeeze every inch of usable space out of there, and they have been absolute sods to get in but they are secure and after a bit more swearing the rest will be done.

For the larger storage space at the stairs-end of the eaves I'll be using more battens.

One other thing that's been taking my time is the architrave around the downstairs bedroom door which was complicated for reasons I won't go into here. That's all but done now.

So lots of boring fiddly work laying the ground for more exciting things to come. The next update will feature a lot more green glue ;)

That's a lot of work in those few photos! :clap:

I'm glad you gave yourselves that 'time out' in the garden the other day to chill a bit while getting toasty.

blinddrew wrote:That's a lot of work in those few photos! :clap:

:thumbup: Just looking at that plasterboard is making my arms ache...