Although the project is primarily about the studio, in order to do it at all I've had to steal space from the floor below in order to install the stairs.

The room from which that space has been taken is the bedroom of our youngest, and as a compensation for the loss of space we undertook to make the resulting room as nice as possible for her. This has taken considerable effort and has been a priority over work on the studio itself.

Here is a view of that room (below the studio) after some decoration but prior to completion of laying the floor: 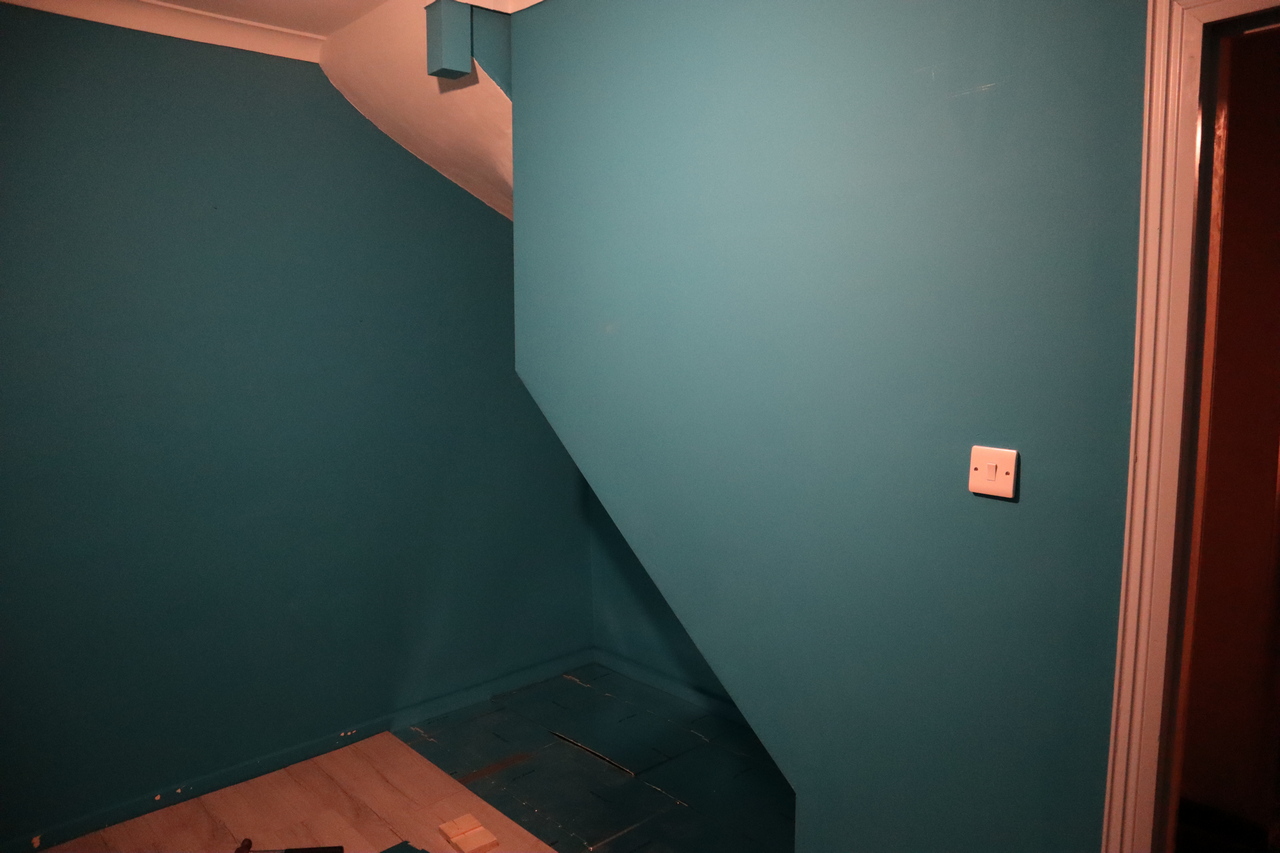 Another view at the same point in proceedings. Doing the woodwork/architrave around the door took a lot longer than I thought it would but I'm content with the results: 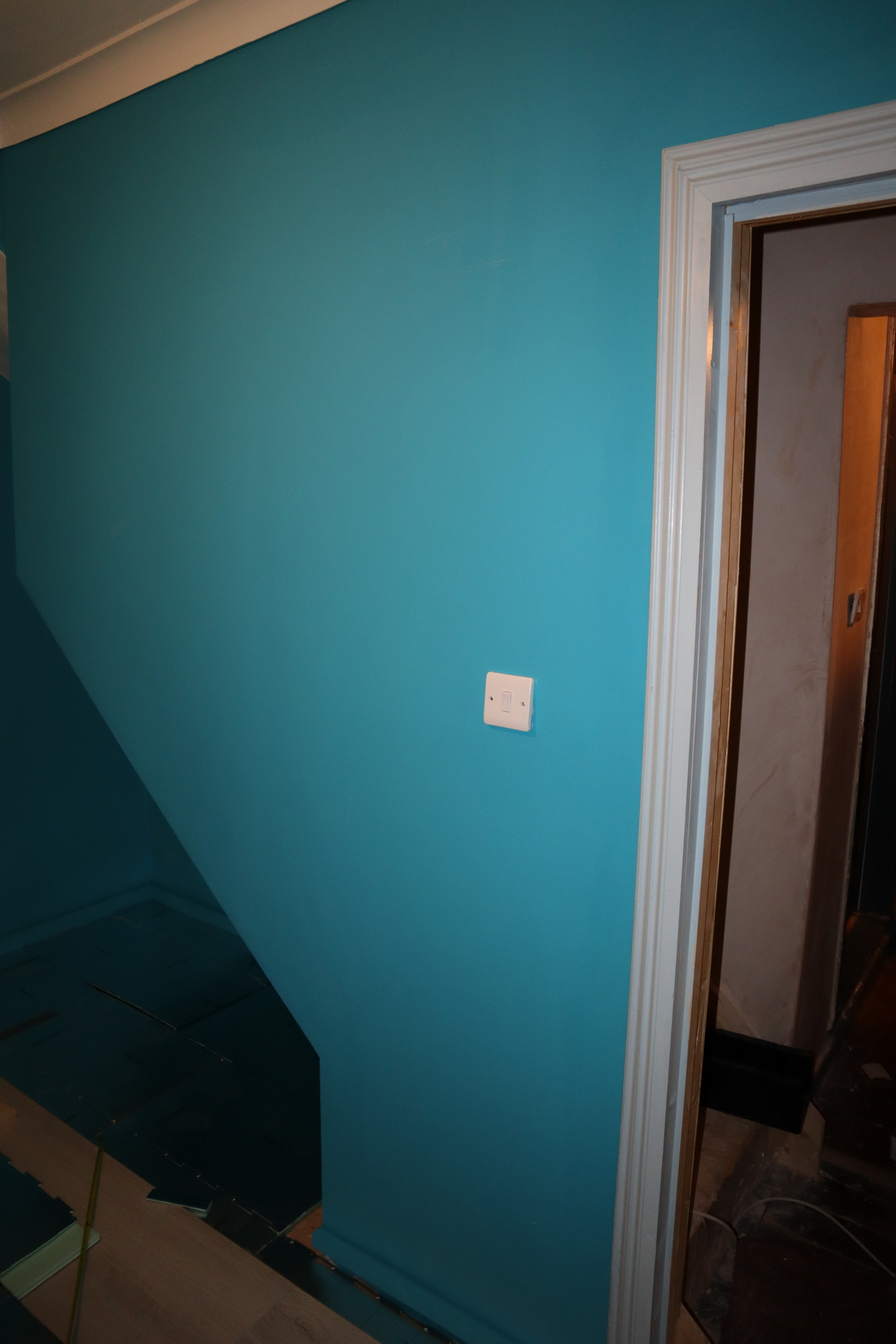 The stairway has now been fully plastered: 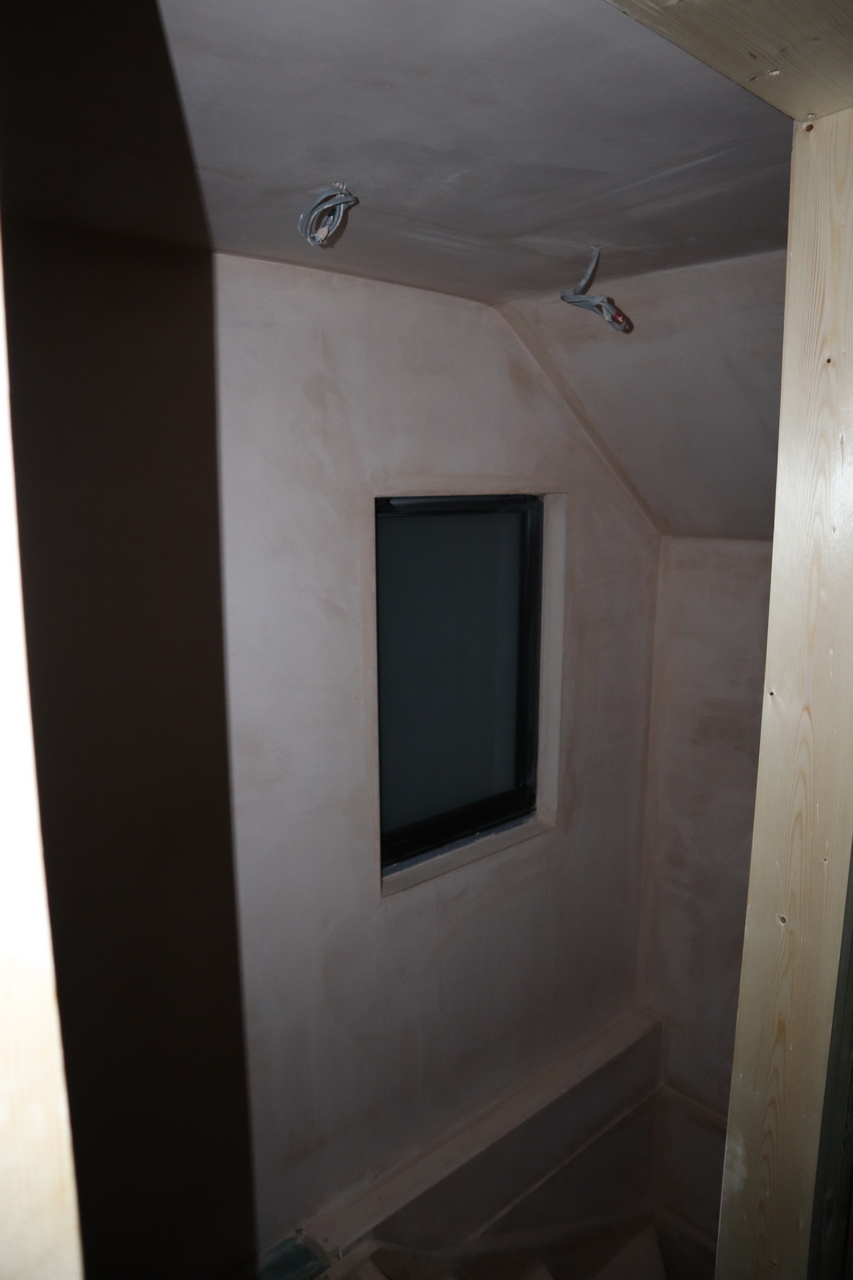 Now for the huge timesink. The eaves. Plasterboard had to be installed, as well as flooring. I can't begin to describe the pain this involved. It was absolutely brutal and took ages, but it's done and the flooring for the storage area is now laid: 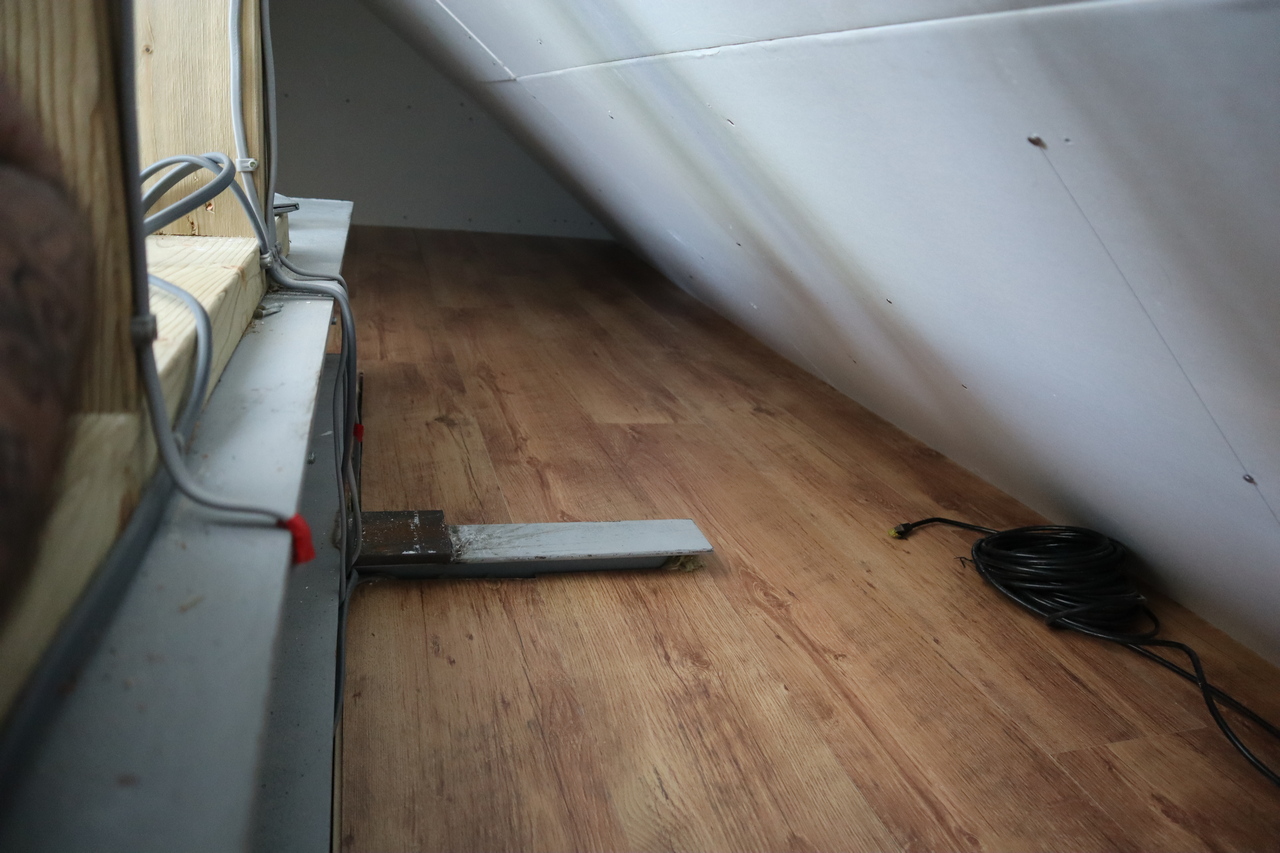 Green glue is flowing again - here I'm finishing off a board that goes on the party wall: 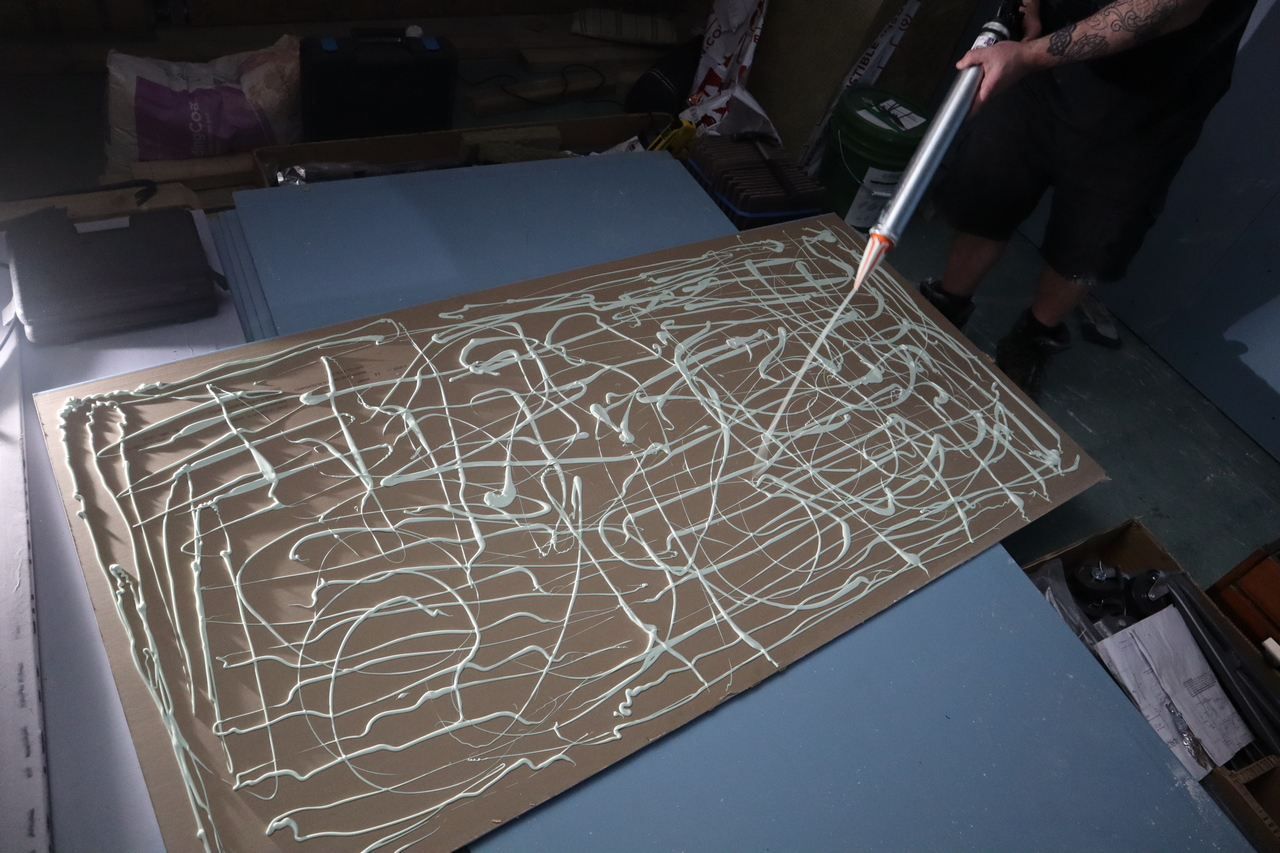 I've also installed a bunch of resilient bar around the chimney box-in: 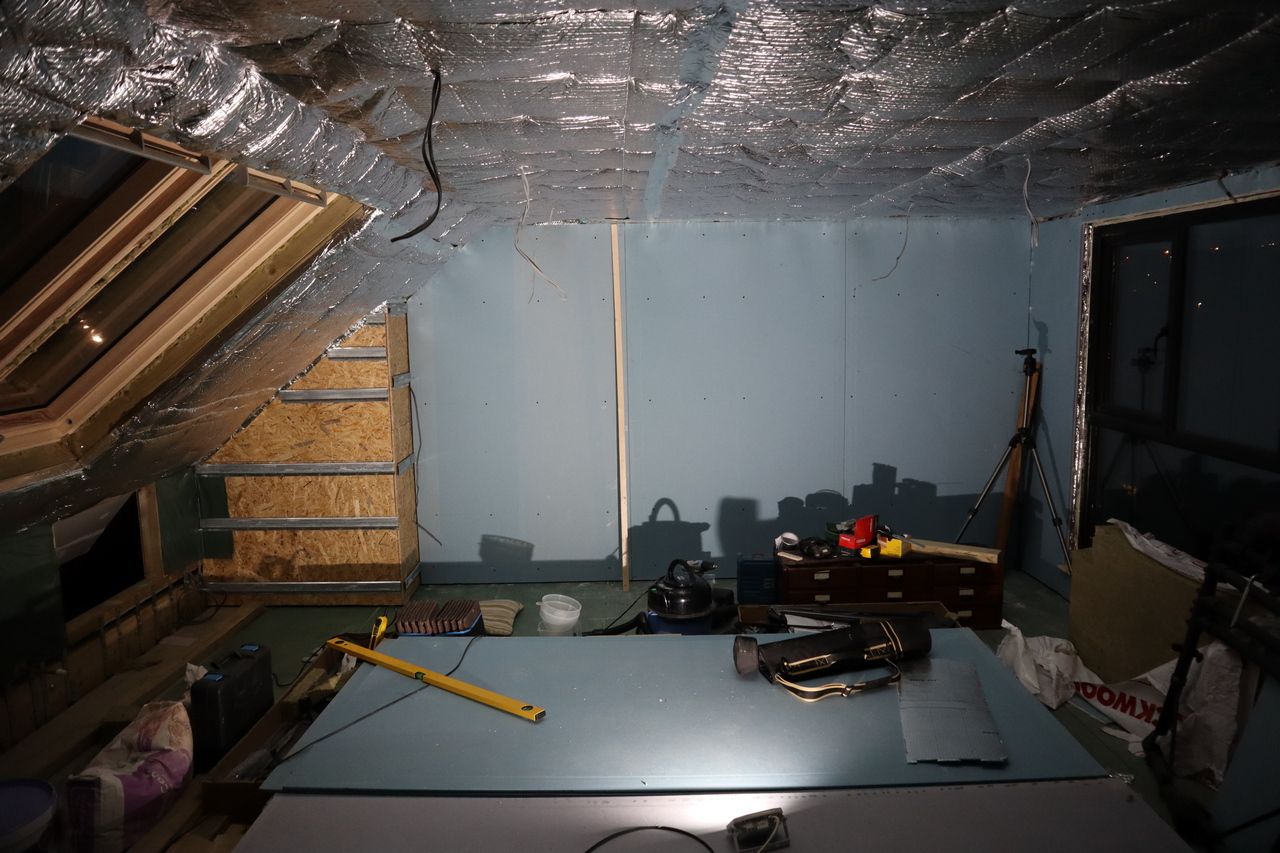 There are a few other bits and pieces that have gone up that I won't bore the reader with (including insulation and plastic sheeting in the the short wall between the acoustic and storage area to the lower left in the last photo) but one thing I will say with gusto is that however long you think anything will take, double it. Then double it again. And then double it again.

The progress photos here represent way more hours than I could have possibly imagined. Fortunately a number of head-scratch moments have passed, mainly in conversations with the electrician as per my last post but I'm not really looking forward to the ceiling, although it's coming soon whether I like it or not

Looking good! Your experience with time required to do a job is why I no longer own a construction company! By the time you learn to price a job accurately, no one will hire you.

Skepticism is a fundamental component of science.
Top

Expect no argument from this quarter

Great appreciation here of your back breaking work. It has given me the inspiration to slog on when my small jobs are taking forever.
There is a contractor around here who has a license plate that says - 2 WEEKS. When asked how long a job will take he points to his license plate knowing full well that’s the fantasy number the client wants to hear.
Nothing takes 2 weeks.

Thanks for the update. Compared with me, you've been working at lightning speed

Studio Support Gnome wrote:Sadly those vents on the windows.... basically throw most of your isolation work in the bin

Only when they're open, and they won't be when I'm doing anything that may be compromised by them, which is probably 0.1% of the time.

I can see where Max is coming from. The trickle vents are only covered by a fairly thin strip of plastic coated aluminium with a foam rubber backing. These are very much your weakest link acoustically. You're spending a lot of time, effort and money on making everything else very acoustically soundproof, but the vents will let in/out more noise than you probably think, even if closed when the studio is in use. 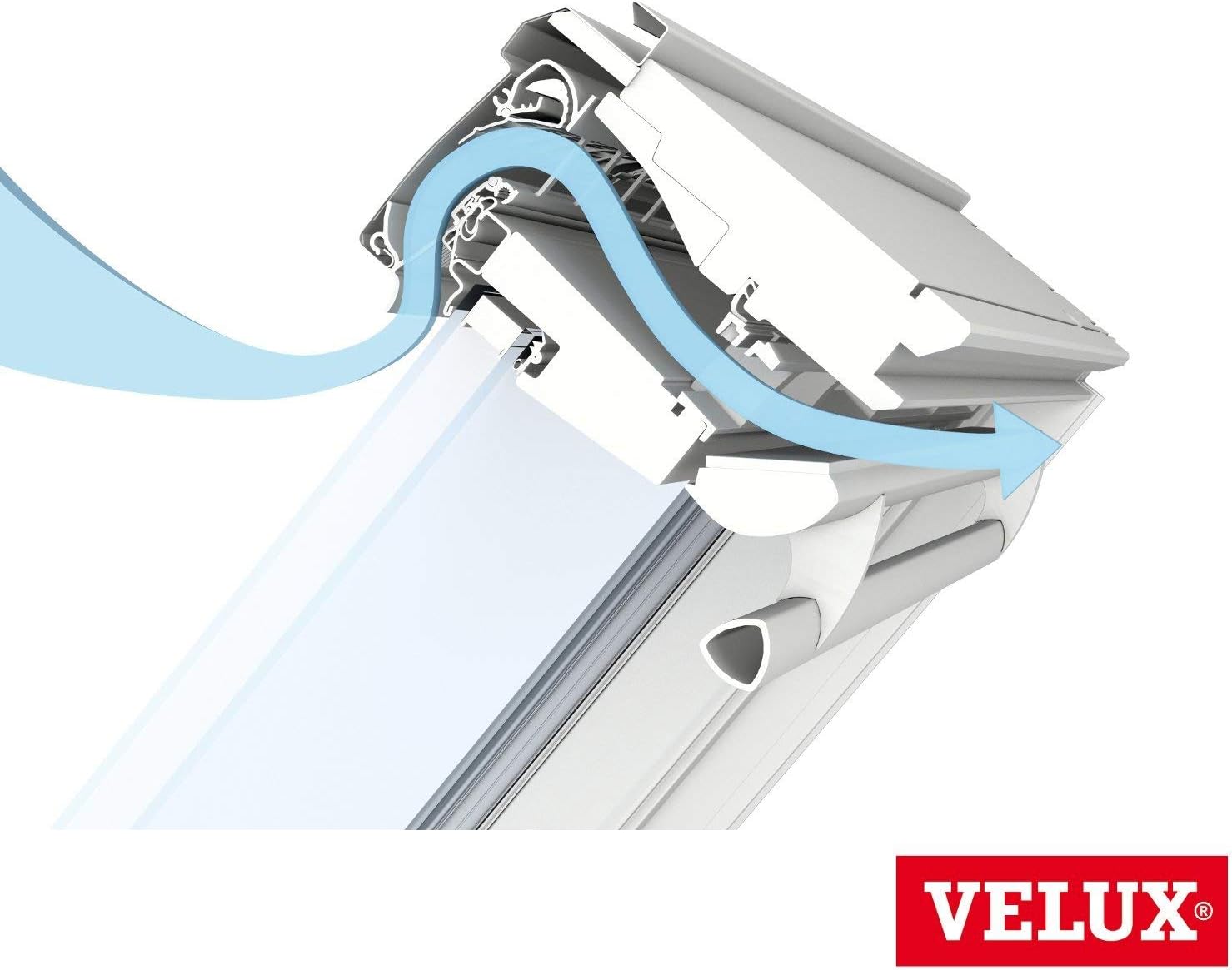 The studio may well end up as quiet as you need it to be, but by having them (and not a custom ventilation system with baffles) you may have spent a lot more than you needed to, in order to get the level of noise insulation achieved.

Just squirt AC50 into the gap.

They're a bit big for that.

Wonks wrote: The trickle vents are only covered by a fairly thin strip of plastic coated aluminium with a foam rubber backing. These are very much your weakest link acoustically. You're spending a lot of time, effort and money on making everything else very acoustically soundproof, but the vents will let in/out more noise than you probably think, even if closed when the studio is in use.

Ahh, I see... yes. Well, there is another thing to fall back on if it turns out that the ventilation strips are a problem in use. As the velux windows are surrounded on all sides by a deep return (which will be about 100mm once the inside of the skeiling is boarded) it's quite practical to make a removable cover (or covers) for them which would fit snugly in the frame and cover them up when required.

That, or some similar solution, is always an option. And if you don't suffer any noise issues from them, then you can always get the ventilation you need the day after a good curry!

and if it’s a really good curry you’ll be able to test your bass traps.
What I wouldn’t do for even an ok curry these days. Curry you are greatly missed!
Btw - Eddy, that is a fantastic green colour on those walls. But how are you going to get a grand piano up those stairs?

ManFromGlass wrote: But how are you going to get a grand piano up those stairs?

Well, if push comes to shove I can always disassemble it a bit and put it back together up there 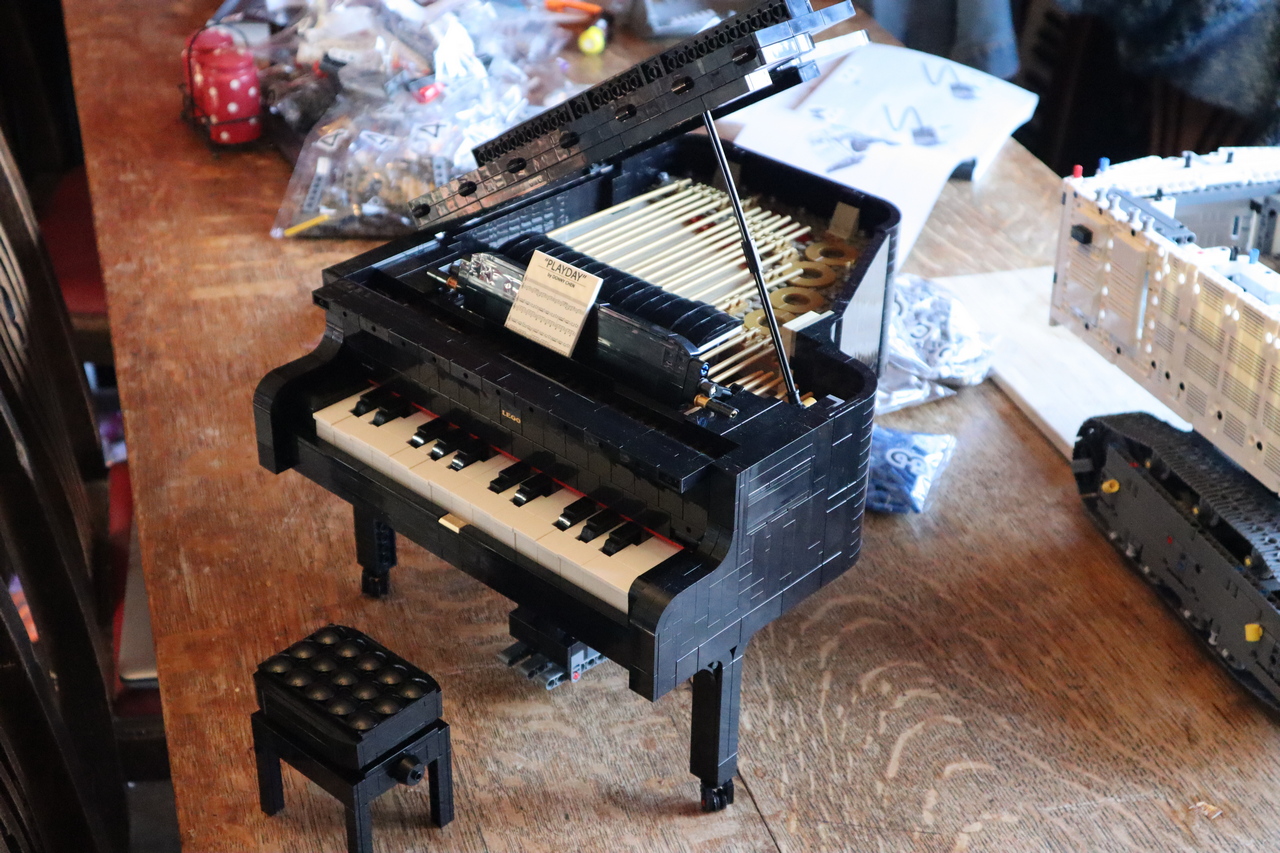 I think that's the same 2 octave poly-aftertouch keybed they're planning to use on the DS80 isn't it?

Pico-keys can be The Elf's next pet hate.