Alternative to the piano roll system for MIDI? Skip to main content

Alternative to the piano roll system for MIDI?

Alternative to the piano roll system for MIDI?

I would like to know if there is yet an alternative to the 'piano roll' system for MIDI editing.

The problem with music notation software is having to pre-decide on a time signature and basing the actual durations on it, whereas the pitch system is pretty easy to use without rhythmic considerations!

This simply means being able to just add MIDI notes freely but see the pitches in positions relating to standard notation on a 'grande staff' instead of a piano keyboard note.

I suppose the standard staff lines (in relation to Middle C), but with a three colour system: black (natural) green (flat) and red (sharp) could be used along a C diatonic stave-grid to convey sharps + flats (rather than note-heads) which would mean no gaps between pitch events that need to be accounted for by symbols.

Unfortunately, most software has 'Middle C' (traditionally C4) as C3, but anyway.

Pitch notation is important for conceiving harmonies and part writing because a lot of theory is understood clearly through concepts that were learned on paper, especially advanced harmony and compositional technique.

By default the key could always be assumed to be C ...some jazz composers used to notate every accidental rather than paying attention to key signatures, so with simplified notation that would be pretty easy.

Also, if the software comes in the form of a notation editor with simplified rhythmic/durational markers, I think a system that uses a simplified standard pitch notation could be optional:

Does any alternatives exist? Any thoughts?

There are guitar tab editors, Event list editors and there's another French (I think?) one based on an accordion type layout to facilitate quarter tones. I can't remember the names of any of the apps though! Maybe posting this will jog my memory. Here's a decent list:
https://en.wikipedia.org/wiki/Compariso ... sequencers

Also, there's no "tradition" about where middle C is on MIDI, but there are two common conventions:
http://computermusicresource.com/midikeys.html

Yes. Middle C is C4, traditionally, but I think it got mislabeled for some reason, perhaps because of narrow register MIDI keyboards.

Musical notation is meant to be read. If you use that for MIDI parts they sound square.

The detail of a real performance has many more nuances than the notation can handle.

MIDI can't even really do it since it can only record 'events' that it knows.

But what you can do (in Protools - must be something similar in other DAWs) is create a tick based instrument track.

Then when you play, the MIDI track shows notes as just time duration (msecs) and pitch. But there is no quarter notes, or meter like in a tick-based track.

So you can just play, and edit notes as 'events' in time and pitch and velocity freely.

DC-Choppah wrote:Musical notation is meant to be read. If you use that for MIDI parts they sound square.

I agree, but I'm only referring to the pitches of notes here, suggesting it would be useful for some musicians if they corresponded to staff lines rather than (vertical) piano keys which aren't that clear on the graph anyway. The use of graphical lines to indicate rhythmic duration can remain standard.

DC-Choppah wrote:The detail of a real performance has many more nuances than the notation can handle.

Anyone who's studied harmony will conceptually understand much of it in terms of standard pitch notation and the keyboard. My idea was merely to offer something closer to pitch notation, with standard MIDI blocks rather than traditional note heads.

On the other hand, if a keyboard is going to be the only reference for identifying pitches, it would probably be useful if you were able to flip the graph when composing harmony, so that MIDI durations went downwards and pitch was from left-to-right, like Klavar notation, but with standard MIDI blocks. In that way, you could more easily see the keyboard line up with the notes you are writing on a widescreen monitor.

Klavar only shows a small portion of the keyboard, but normal MIDI blocks on a widescreen monitor could allow zooming to show fewer or more registers: 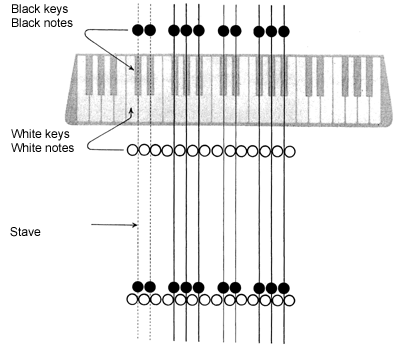