Hi Ryhad. I had some thoughts on your original post.

The natural minor is a mode of the major scale, so it has the same chords in a different order. The other two minor scales do produce different chords. You can also use the three different scales to build 7th chords and you would get most chords in common usage.

I didn't get that. You already have all the triads from the 1st process.

You'd be better thinking on these as 'four note chords' as you also have 6th chords. You could also include add9 here - R,3,5,9.

>> Extended Chords:
>> This is where i'm getting stuck with voicings, sound can get real muddy
>> and my understanding of the theory lets me down.
>> http://www.simplifyingtheory.com/extended-chords/

I think voice leading is something that could be implemented with an algorithm. The basic principle is 'go to the nearest note'. I had a listen to your video and it sounded like the voicings skipped about, so voice leading would improve that. I think it would be good if you implemented voice leading on triads, then deal with four, five, six and even seven note chords.

Hey Merlyn! Thanks for your time :D

I know right?! Simplifying music theory.com really didn't do that at all..

Re: 1st process.
I discovered! https://github.com/Riolaurenti/c_Seq/blob/master/Substitutions
Which is wonderful, as I can simply shift the array to fit the current mode.
I'm still a little confused with the Harmonic minor, but otherwise it seems to work for triads and 7ths :D

3rd process... probably doesn't make sense sorry!
Looks like this, literally how the current notes in the scale degrees are voiced, which would have been a better way to describe whats happening - learning quickly. 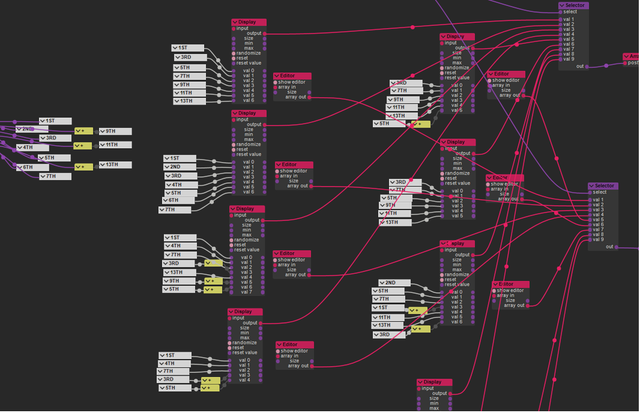 6th:
Hey, thanks for pointing that out! That'll change how I use sus chords in substitution options :) appreciated.

the next two points really cleaned up my lack of knowledge, thanks.
The point about the tritone in a maj7b5 especially interests me, i'll experiment with including it in the substitution options.

https://github.com/Riolaurenti/c_Seq/blob/master/Notes
New updated chord list - and the Zappa song for anyone reading ;)
https://www.youtube.com/watch?v=VInuvlshJ4M

I will continue as you and our friends prior recommend - understanding counterpoint, mapping "available tensions" and making the arps correct their decisions depending on the voicing of the chords. starting with triads and working from there .. No small task ahead.. But I'm excited to hear the results.

Quick video of the progress so far:
https://www.youtube.com/watch?v=qJNXgV8EBxg

Thanks all again!
Regards!