I literally live for open-mics. My usual modus operandi is to take something unusual and hope the audience is so distracted they don't notice I can't really play it. Works surprisingly often.

I'm quite well provided for in Norwich; eg this week (don't go to everything):

Tuesday - The Reindeer - varied session run by a gypsy-jazz guitarist. (You'd get along Sam.)

(Got lucky at The Reindeer last week; had a go at A Message To You Rudy, and a French trombonist called Xavier turned up.) 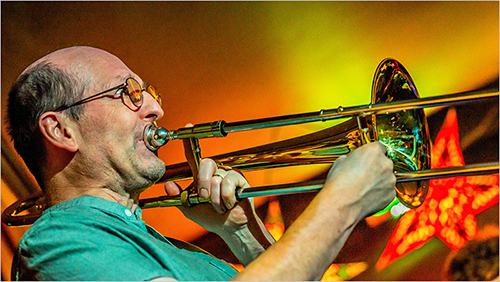 Wednesday - Walnut Tree Shades - Blues jam. I thought I might have a go at Neil Young's Motorcycle Mama later. (Always thought it was "lay your big bike down"; only just realised it's "lay your big spike down" - another song about heroin addiction. At least that's one problem I never had.)

Thursday - Cactus Cafe, the "Cactus jam". Everything's completely improvised, including the vocals. Usually just take gadgets along but I want to have a go at making some rubbish up...

Friday - Expect something will turn up.

Did a gig not far from you late last year. Wish I'd had time to look around the area!

That post is a proper trip down memory lane for me BJG145, the Cactus is new but the rest were regular haunts of mine. :)

It’s easy if you’re a guitar player, to do open mic nights, but if you’re a keyboard player it’s not so straightforward, especially if you’re a pianist, like me, tucking a Roland or a Yamaha under your arm isn’t so easy as packing an acoustic guitar, assuming you’re turning up "on spec"

Absolutely, especially with my Emerald X7. The maker goes to the trouble of publishing the weight off the gig bag, presumably 'cos it's heavier than the guitar!*

Addendum
Well I showed up...didn' t get called. Swine. Norwich? Give it a miss. :protest: #NarcissusComplex ;)

If anyone does plan on turning up with a keyboard and expects to plug it into the house PA, I would strongly recommend you take your own transformer-equipped DI box and make sure you use it!

I use (passive) Radial D2s, but there are lots of alternatives.

The critical point is that you don't want phantom power accidentally left switchefd on, or a mains fault in the house PA, reaching your expensive and much-loved keyboard under any circumstances....