something to use for vocal effects live Skip to main content

something to use for vocal effects live

For performing musicians and engineers: stagecraft, engineering and gear.

something to use for vocal effects live

hey there..i play in a pink floyd tribute band..im finding the more places we play the more im finding that the engineer has never heard floyd before so im thinking of taking the vocal effects into my own hands/feet...im looking for a floor unit i can use ..ive no idea of where to start with this..ideally nothing to big because it has to fit onto my guitar pedal board but i want it to be able to do vocal harmonies reverbs and delays etc

it would be awesome if i could hook it up to the stuff i use already so im not tap dancing all night...my main effects for my guitar is the hx effects.so it would be handy if i could control it with midi

Investigate the TC Helicon range of fx, they do everything from stompbox sized vocal processors to full on harmony plus everything including the kitchen sink units (TC Voicelive 3 Extreme) complete with extensive and capable guitar fx. 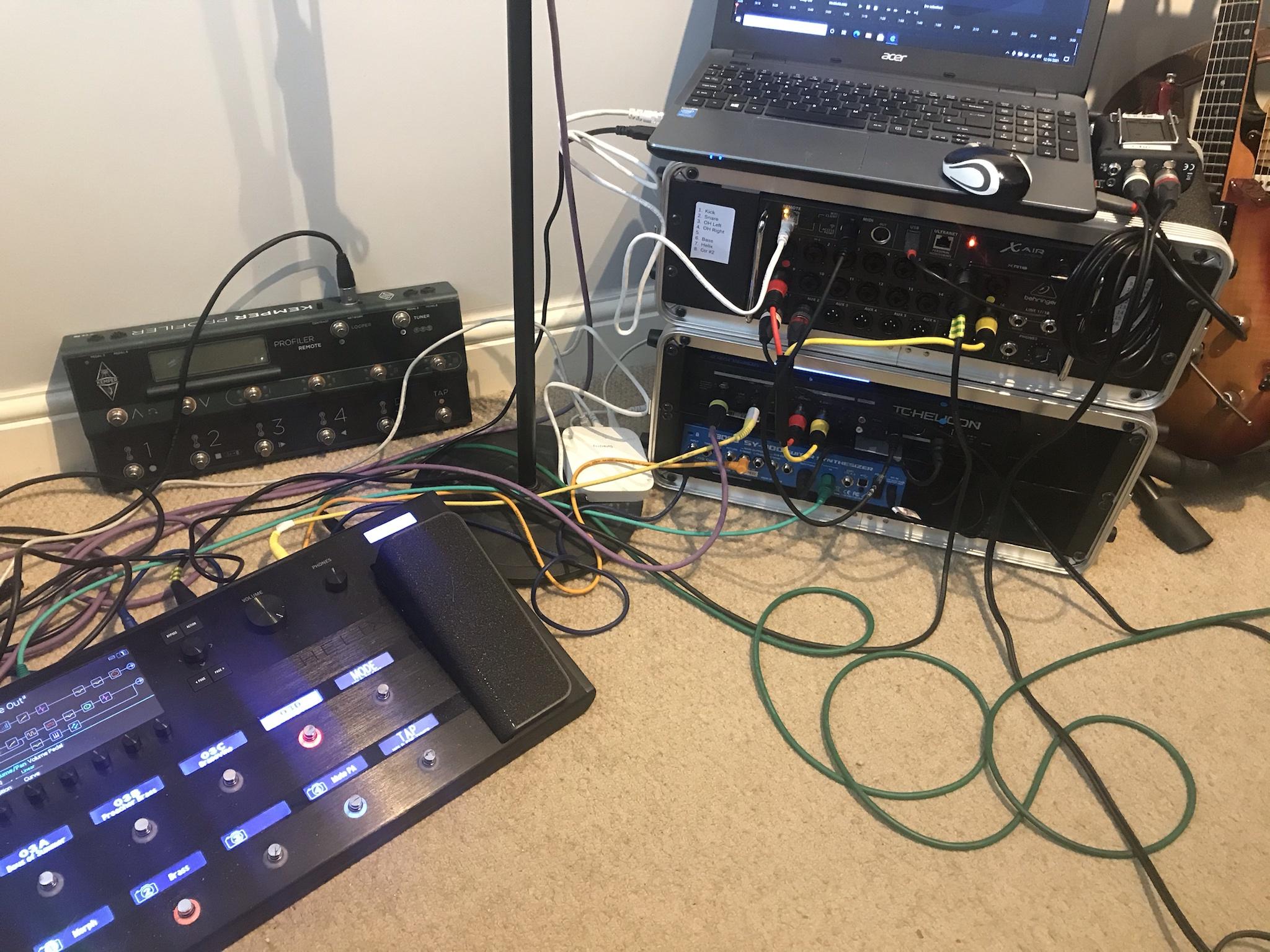 Guitar > Helix. First 'effect block' in the Helix chain is a send (so clean guitar signal) which is sent to the instrument in of the TC Helicon VoiceLive 2 (which is in the lower 4u Rack). This gives the VoiceLive its pitch reference.

Both Helix out (mono) and VoiceLive 2 (stereo) go to the Behringer XR-18 mixer in the 3u rack.

Here's the clever bit. I have a Helix patch for each song in the repertoire (x2 for 2 bands). When I pull up the Helix patch it pulls up the associated patches in the SY-300 and VoiceLive 2 via MIDI PC message. If I need to switch sounds on the VoiceLive 2 mid song (by chance, on Floyd's Another Brick in the Wall) then I do this from the Helix via CC message.

Because I'm really showing off, the laptop which runs the XR-18 is also loaded with Cantabile software and this pulls up a song file to match the Helix (MIDI over USB). This song file contains things like count ins and the occasional pre-recorded intro clip. I start and stop the playback using MIDI notes from the Helix (which means that I can record up to 18 tracks of live audio with the push of a button).

Basically I run the show from my Helix using one foot.

thanks for the replies guys..ive been looking at the tc stuff for a while now but ive never seen one used (or at least i dont think i have) so i wasnt sure if they are as good as im reading online..im asking here cause i trust you guys and if you guys are using it live , it must be good

there isnt much to choose from tbh

so am i right in thinkin i need to get a clean guitar into the voice live so it can track the vocal harmonies?..or ,can i programme in what i want it to do ? or both?


looks like i have to read up on pc midi msgs..i want to control my shows with 1 foot...thats the dream right there

MusicWolf has taken this much further than I did so I'll leave the detail and practicalities to him but my experience is that using the guitar as a pitch/chord reference is harder than it looks. But, useful stuff can be done using pre-programmed patches. Soundwise the TC stuff is very good indeed and if I was going that route again a Voicelive 3 Extreme would be top of the shortlist.

As to how good the effects themselves are - they can be very good but less is definitely more.

I use mine mainly for backing vocals (so lot's of ooh's and ahh's). I should point out that I do not use the onboard delays and reverbs even though they are very good. I add these from the PA so that we can adjust according to the room.

The MIDI implementation isn't too hard if you are using HX Edit on a computer (Command Centre is your friend).

My old TC Helicon Harmony G pedal did very well at chord detecting and producing major or minor harmonies from that. But it does need an input signal to work with and single notes aren't enough, so you need chords. If you start off a song with just a vocal harmony, then you'd need to use say a volume pedal that could mute the guitar signal to the amp but still output you playing an appropriate chord via a tuner output in order for the unit to correctly harmonise.

So it is far better if you can pre-program different patches for different songs with the correct keys and select those patches via MIDI. But it does entail having far more patches on the guitar and vocal FX units than you'd otherwise have, with each song having its own set of effects, rather than maybe just having maybe 10 generic settings that would otherwise cover your normal guitar tones in a gig.

Yes. I find that I have the same, or very similar, patches stored in multiple locations for all devices. This makes it easier when re-ordering a set list but much harder to make tweaks to settings.

I usually start by manually selecting patches during early rehearsals then, once I'm happy, I link everything up.

Did I forget to mention that the Helix also selects mix scenes on the XR-18 and has an emergency PA Mute button in case of uncontrolled feedback? And I did all this without the aid of my teenage son

Music Wolf wrote: And I did all this without the aid of my teenage son

You obviously borrowed a 9-year old from a neighbour.

Another vote for TC Helicon. I’ve used their reverb pedal and loop pedal to good effect.

But if you want more options you could try the Radial Voco Loco which enables you to connect any instrument type pedal into the microphone line. It’s a very solid piece of kit.