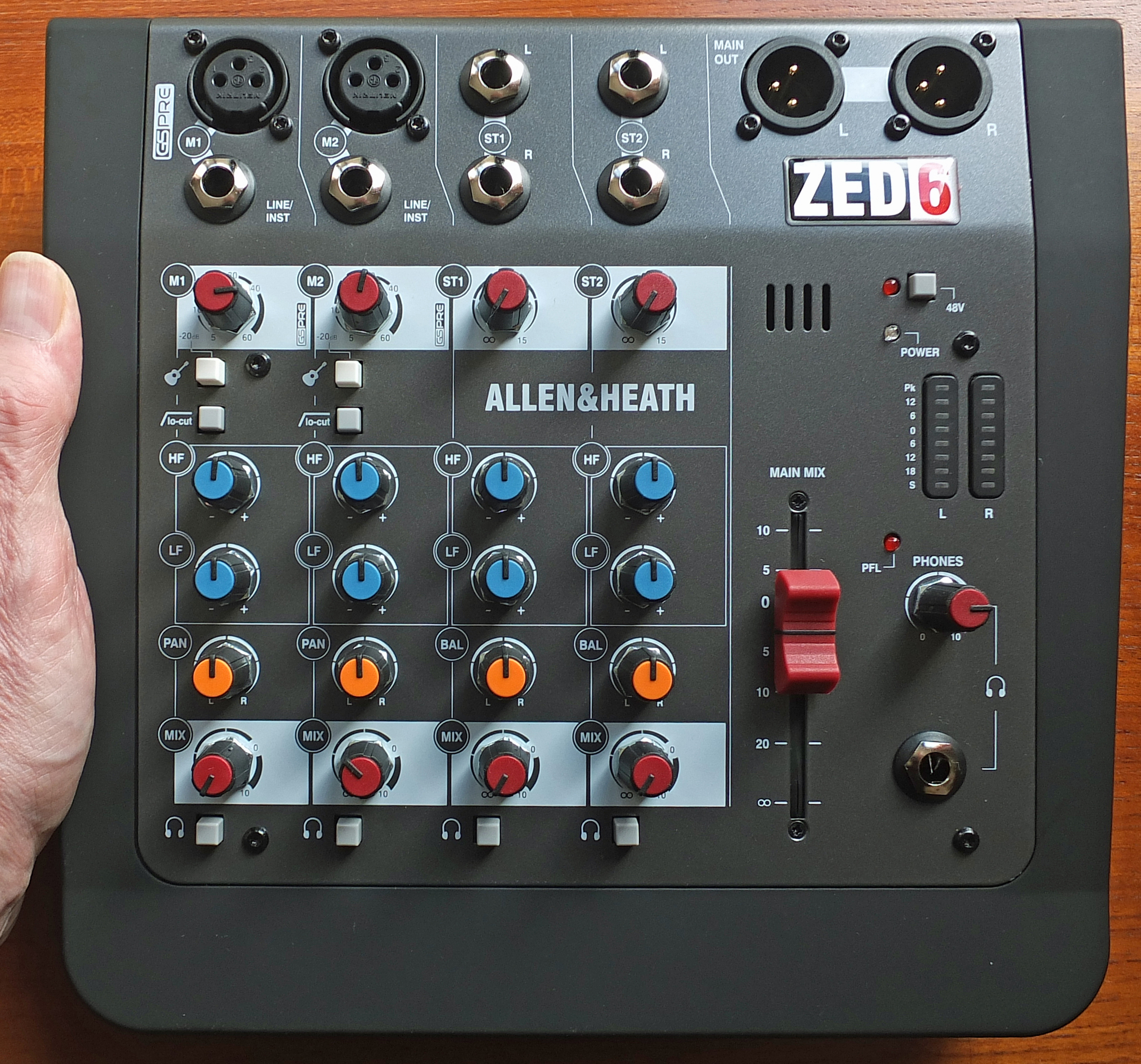 Now that I've put (almost) all of my live-sound and recording eggs in one basket with the purchase for silly money of a Behringer UFX1604 mixer-recorder I realised that I'd potentially boxed myself in.

Living in the heart of the Gloucestershire countryside, some of my regular summer events are the provision of a modest sound system and announcer for village fetes. The English weather is nothing if not variable and, even though I always work from a gazebo, the thought of rain or water-mist getting into my all-singing and dancing new Behringer filled me with alarm.

So the sensible thing to do was to buy a small, reasonably-priced mixer with a couple of mic inputs and a line or two for the background music via tablet. Choice in that market-place isn't exactly limited!

Bear with me in a small digression. Over the almost 50 years I've been buying gear I've lost count of the times that I've ended up invoking my '90/110' rule before deciding on a purchase. That is, for the budget you have, the facilities you ideally want and what the market can offer, you end up with either 90% (not quite everything) or 110% (more than you need) of what was in your spec.

* 'Proper' mains connection; no wall warts here!
* Balanced outputs on XLRs
* Decent metering; not just 'peak lights or green, yellow and red LEDS
* Good build-quality with plenty of space to get the digits around the knobs
* Respectable mic pres
* 48v phantom power
* Performance of a quality sufficient to use as a pair of extra mic pres for the Behringer if the need arose
* Output fader
* Standard headphone jack with volume control
* Balanced line inputs
* Hi-pass filters
* Proper PFL
* Control surface at a slight angle for ease of operation

Everything else I looked at fell short on one or more - usually more - of the above, was loaded with things I didn't need or was very significantly over budget. The icing on the cake was that it was less than £85 just a couple of weeks ago.

I've previously owned a ZED420 and a ZED10 so I knew I'd be on safe ground with another A&H ZED mixer.

As you'll see from the pic above and one below, the control surface is a decent metal plate, but the outer moulding is of plastic. It seems resilient; I don't misuse my gear, but I'd be wary of this little mixer if you want something to throw into a bag at the end of a gig.

I was pleased to get a fold-out mini-manual written specifically for the ZED6, and not a generic one for a range of four or more mixers. It's well-written too with good explanations of things like gain-structure. My one disappointment was that, although titled as being specifically for the ZED 6, the manual mentions the use of effects when there aren't any!

Those two tiny criticisms aside, I'd recommend this little gem from A&H. It's no frills; it's well-specced and well-built; it has the facilities and connectors that a 'professional' expects and it seems to be cheaper than most of it's competitors. What's not to like? 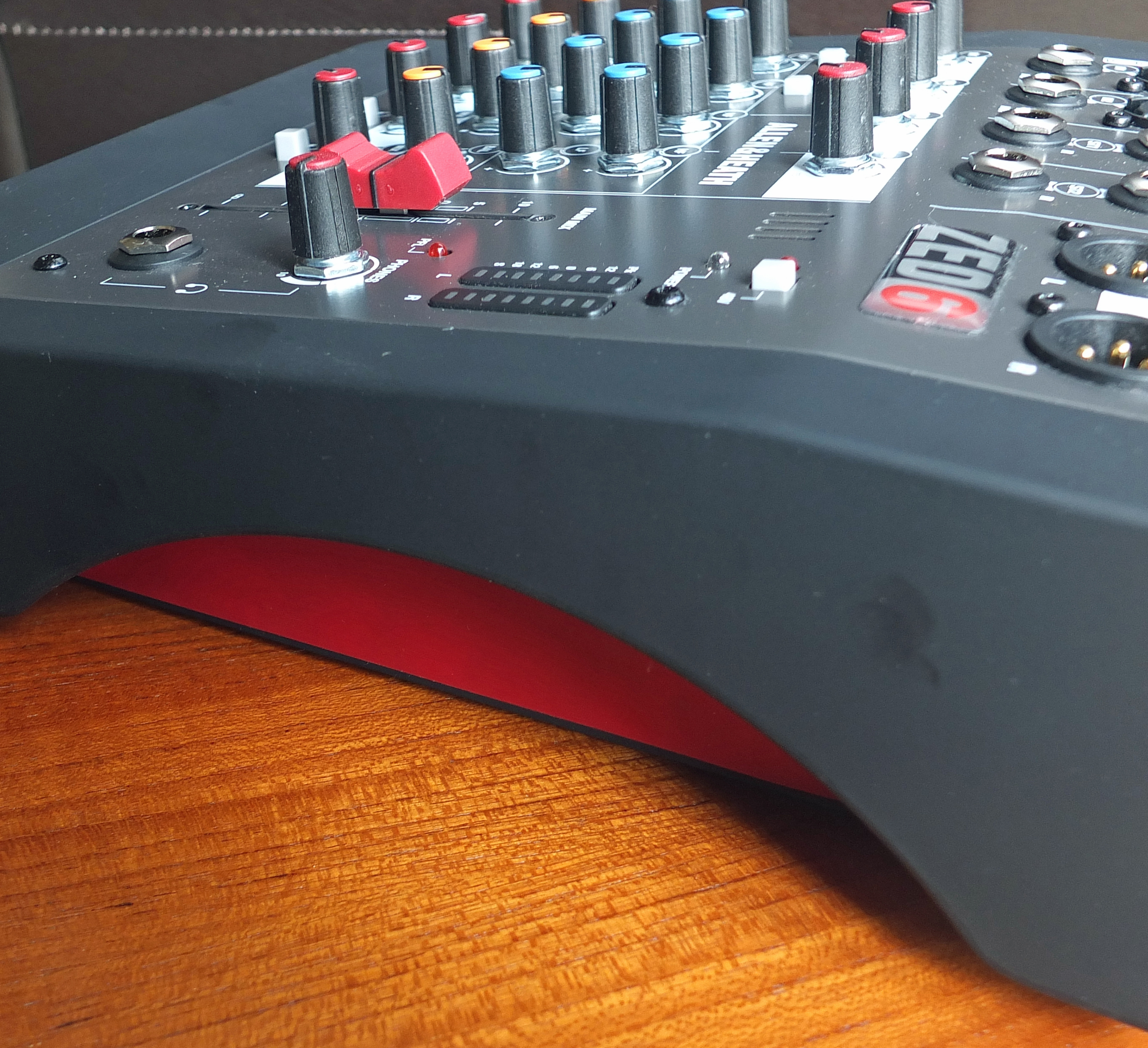 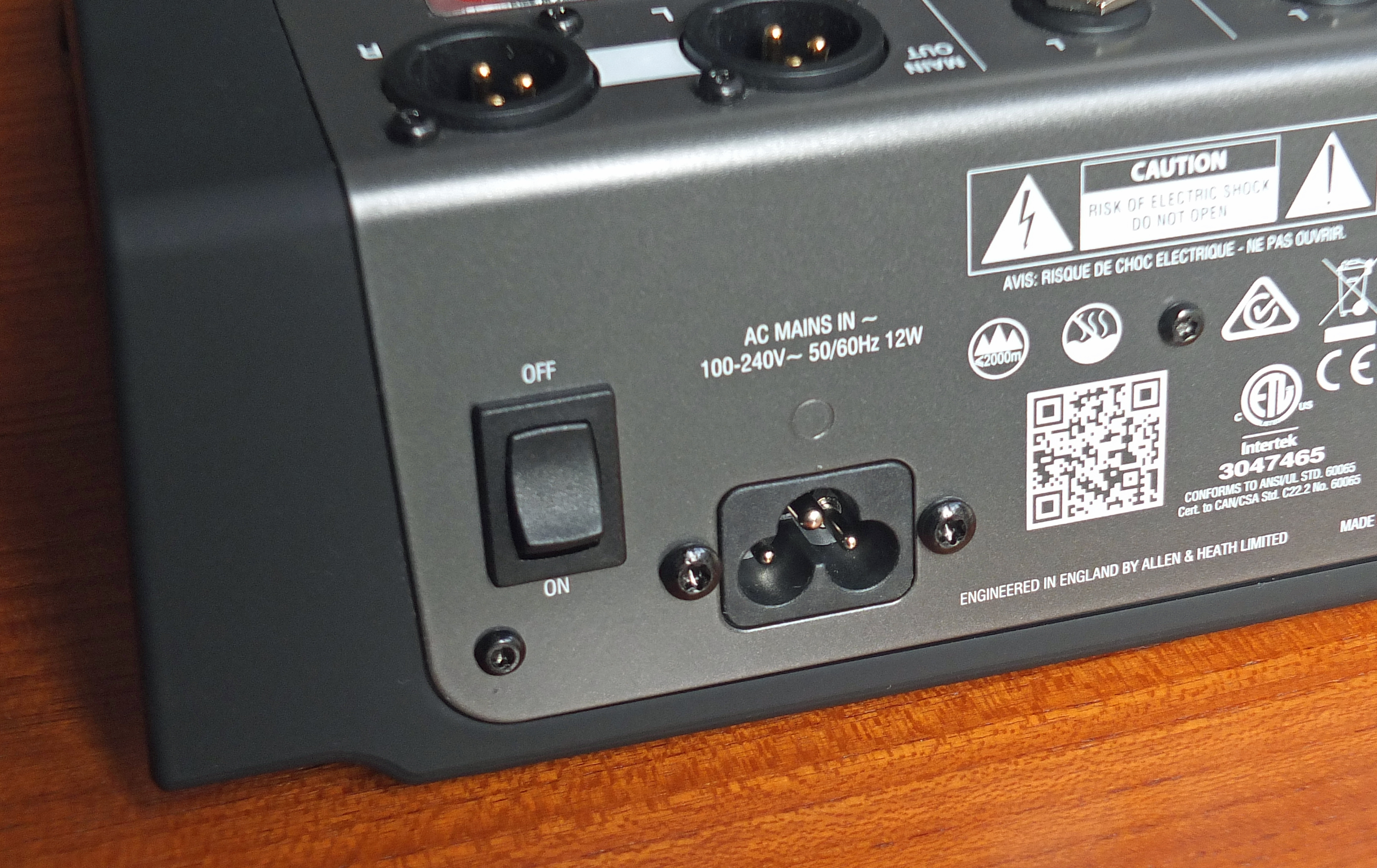 Is that a common mains connector, Mike?
Looks odd.

Yup! Definitely seen them before... and it does come with a 'proper' UK mains lead and plug.

Additional info: The plug that attaches to the mixer is an IEC C5... widely available.

Yup! Definitely seen them before... and it does come with a 'proper' UK mains lead and plug.

OK, Good. That means having a spare mains cable isn't a big deal!
All the best with your new toy!

Damn! Why did they do that?

So that's a special mains cable to remember to bring along, plus a spare because if the original gets damaged or fails you can't substitute any old standard IEC cable from the wirez-bag.

In which case, it would be useful to stick one of these in the oddments box as a useful £6 accessory for getting out of trouble: 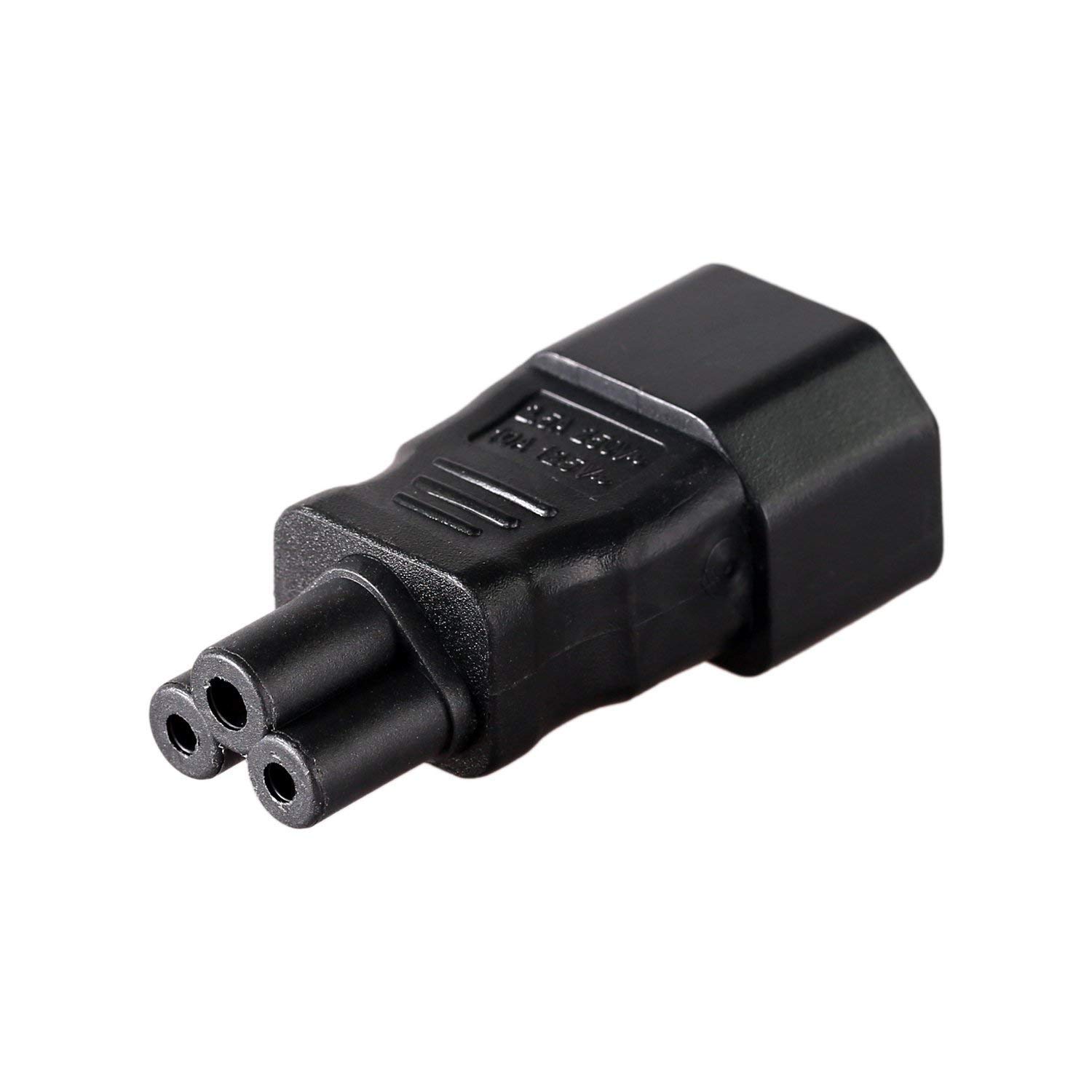 And just as a warning, someone being helpful during rigging at a PW gig once managed to force a C5 'cloverleaf' cable plug into a powered sub's male XLR3 link output socket... with the inevitable release of a lot of magic smoke and some quite bad language!

You got me wondering what the answer was to your question... even if it was rhetorical!

Anyway I came across this, https://en.wikipedia.org/wiki/IEC_60320#C5/C6_coupler
a nice wiki summary of power connectors.

Moroccomoose wrote:You got me wondering what the answer was to your question... even if it was rhetorical!

It was rhetorical -- I have no idea why they decided a C6 was more appropriate than a C14. It has a much lower current rating at 2.5A instead of 10A (although some C13 plugs are rated at 6A) -- but that's not particularly relevant. I suspect it's just because a C6 socket is slightly narrower than a C14... although there doesn't appear to be any serious space constraints on the rear panel.

Yeah, it's not a huge deal (pop one of those adaptors in the bag), but why would they do it in the first place?
It is genuinely baffling.

Maybe it could be swapped out for a 'standard' Euro socket? It's hard to tell from the photo, but if the chassis is the same size? Even if not it could still be possible with a bit of tweakery.

I'm in the middle of getting gear modded with proper mains sockets and mounting their cursed external PSUs inside their cases. So far it has been plain sailing, and it's making gigging a much less traumatic affair...

Can we suggest an "Ooops!" moment in the design process? Having got everything lashed up and PCBs and metal sorted they found there was just not quite enough room for a standard IEC socket?

Not a huge problem though? Anyone who has a laptop is going to have a cloverlead. Fair play BTW for that picture of the adaptor. did not know of those, will get a couple in for me and son.

I find the lack of the almost ubiquitous RCA "domestic" I/O more peculiar. These allow the easy connection of a recording device or injection of music from a phone etc but, money talks and price points have to be hit.