The £25 BA 85A is supposed to pay homage to a Shure Beta 58A. In terms of looks, the blue rubber band round the capsule looks convincing enough, and the faux two-piece body with an engraved line around it, is meant to convince you that (at least from a distance) people are going to think you spent £130+ on the real thing.

As in my other Behringer stage mic review https://www.soundonsound.com/forum/viewtopic.php?f=27&t=70540, I first compared it against an SM58 (as I don't have a Beta 58A) using an Alto TS310 speakers and Alesis Multimix8 USB FX mixer set up in my lounge. I then recorded their output signals into my DAW using a speaker playing back pink noise. The graphs need to be viewed for comparison purposes only. The graph isn't to be taken as an accurate representation of the actual frequency response.

I used the Melda MAnalyzer on a stereo group channel, with SM58 feeding into on one channel and the BA 85A feeding the other. I've then adjusted the gain on one channel, so that the output levels are as close as I could get them at 1kHz ( a standard comparison frequency). The MAnalyser was set to normalise the overall levels. I used 30 seconds of a pink noise 44.1kHz/24bit recording. The MAnalyser was set to average over the whole input period (to even out the random nature of the noise), with a small amount of smoothing set for the display to take out the small spikes.

As previously mentioned, the body is made in one piece, though designed to look like the two-piece body of a Beta 58A. It's comparable in weight to the Shure. Unlike the Behringer SL84C, the blue rubber band around the middle of the grille is soft enough to give some anti-rolling protection. The grille basket itself is slightly bigger than that of the SM58, so they aren't interchangeable

The signal output level is very similar to the SM58, which is surprising, given that the Beta 58A has a neodymium magnet and according to the Shure specs gives a 4.5dB higher output signal (for the same input SPL) than an SM58. I have compared an SM58 against a Beta 58A a few years ago, and the Beta certainly had far more output. A similar output level as an SM58 means that the BA 85A probably doesn't have a neodymium magnet (unlike a real Beta 58A), which is a bit odd, as the £10 cheaper Behringer XM8500 seems to, with a noticeably higher output than the SM58.

What the BA 85A does have, like the Beta 58A, is a super-cardioid pickup pattern. However, Behringer don't provide any polar patterns to show how tight the pattern is. they do provide a small graph showing the frequency response at different angles, but as all the lines are drawn in black and cross over at multiple points it is, to all extents, useless.

The super-cardioid nature was shown during my feedback tests, where angling the rear of the mic by 25°-35° to the speaker gave the best feedback rejection. However, feedback occurred with a bit less overall gain on the mixer than with the SM58. It's not bad, but it could be better and the BA 85A is outdone by its cheaper (but cardioid) stablemates, the SL 84C and the XM5000, in this regard.

The XLR output is wired for a balanced connection, with no connection between pin 1 and pin 3 and I measured a 300-ohm resistance between pins 2 and 3 (which matches the mic data sheet values). The mic has a Beta 58A-like fine metallic grey-blue finish, which has stood up to several mic clip insertions better than its SL 84C and BA 78A stablemates did, with no scarring of the paint.

The supplied stand clip comes complete with thread adapter, And the mic comes in a standard Behringer plastic mic case with a foam insert. 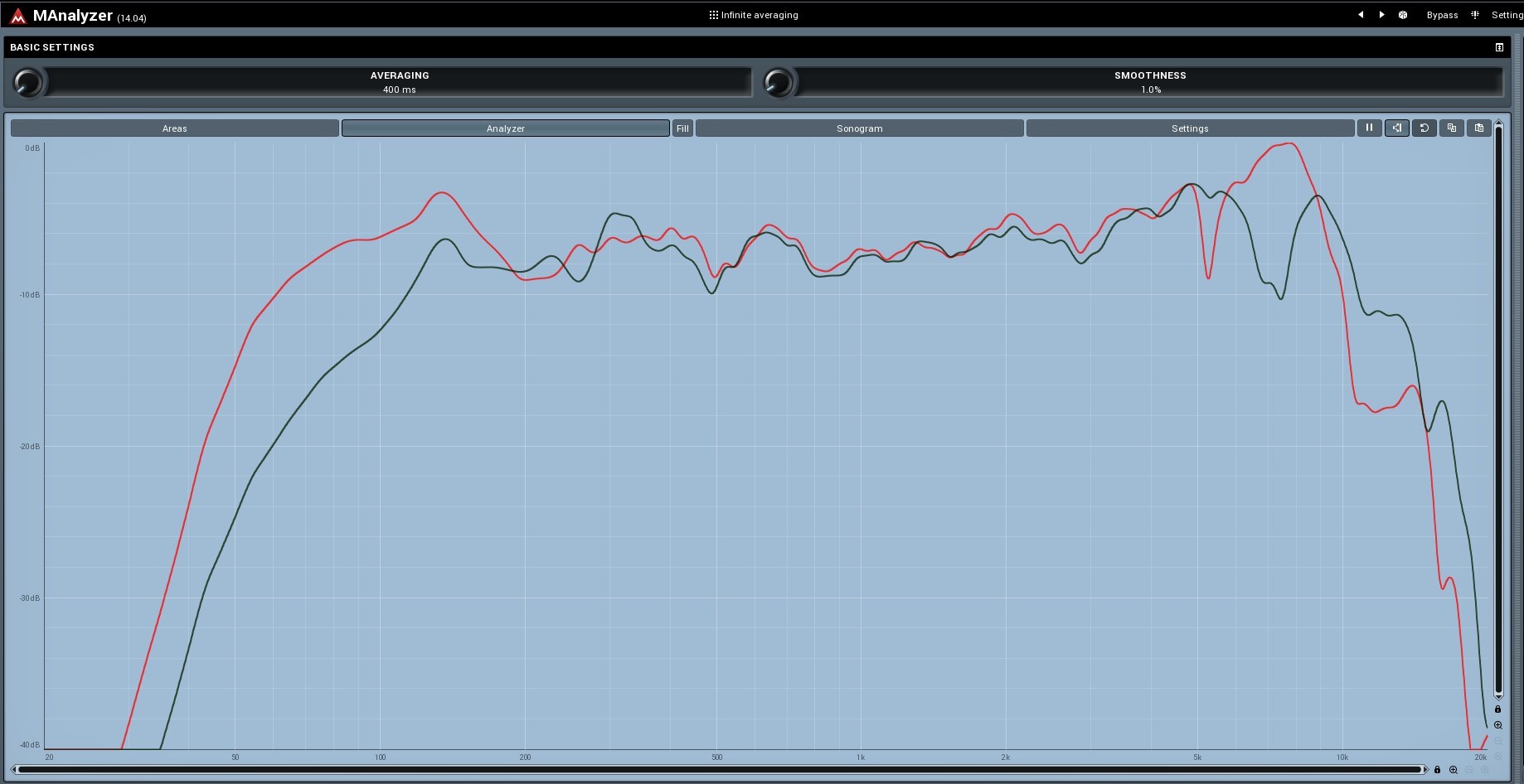 To my frequency-limited ears, it does sound very much like a slightly bassier SM58. Which is a bit of a disappointment as it should really sound better, with more high-end. However, that low-end isn't muddy, but does generally benefit from the low-pass filter being engaged and a touch of low-end being rolled off at the desk.

The mids are very similar to the SM58, as you can see from the graph, But at 5kHz, things start to differ and there's a 6dB dip at 5.5kHz, followed by a 3-kHz wide, 4dB peak (at a point where the SM58 had a 6dB dip. And then at 9khz the frequency response starts to drop and basically keeps going. Behringer quote 50Hz-16kHz response for this mic, but above 10kHz, you are generally 6-10dB down on the SM58. Compared to the 1kHz output value, the BA 85A is 10dB down at 11kHz, whilst the SM58 and XM8500 are 10dB down at 14Khz. As my damaged hearing stops at a bit less than 10kHz, I can't tell the difference, but anyone with better ears would be able to.

Plosives were on a par with the SM58, so not too bad at all. Sibilance (with my voice) wasn't a noticeable issue, though that 7kHz-8kHz peak may prove to be a bit more problematic on other voices, especially bright female ones.

Which leaves handling noise. The capsule is mounted on a fairly soft rubber base, which allows it to move quite a lot when poked with a finger, so I was expecting some good things with regards to handling noise. However, I was badly let down. Behringer just don't seem to be able to make a stage mic with low levels of handling noise. It's all bass-end thumps, not a lot in the mids, but it is significant and if you move your hand on the mic, the loudest noise is maybe only 6dB down on a reasonably loud vocal. You are going to hear it unless there's a very loud band behind you. On an SM58, the handling noise is audible, but only just. So another mic for stand-only use (or those with the daintiest of fingers).

It's a £25 mic, and although we still do expect miracles, you do get what you pay for, Overall, it's got a bit more of a balanced 'as is' sound than the £14 XM8500 but has worse handling noise. It's got less ultimate high-frequencies than the XM8500 (and a lot less than an SM58, let alone a Beta 58A. Its output level is very ordinary.

So for me, it certainly fails as a Beta 58A-alike. Take the blue rubber band off the grille and it fares a bit better as an SM58 sound-alike, but to be honest, as a low-cost SM58 alternative, I think I still prefer the XM8500, which has slightly better feedback rejection, a more extended top end frequency response and better handling noise. Plus, it's cheaper!

So, once again, no budget 'SM58 killer' (let alone a 'Beta 58A killer'). There are some uses say podcasting, where feedback isn't an issue, stand-mounting removes any handling noise issues and for YouTube and the like, extended HF sound isn't really a requirement, and this mic would work fairly well in that environment. But that's a niche market and not its intended main role, which is to be on stage, having yet another version of 'Mustang Sally' being belted out into it.

Pros: Sturdy, reasonable sound, better than many other mics of a similar price.

Cons: Handling noise (so really only use it on a stand), limited HF response, feedback rejection not as good as similar mics, output level is lower that one would expect. Eclipsed by its cheaper XM8500 stablemate.