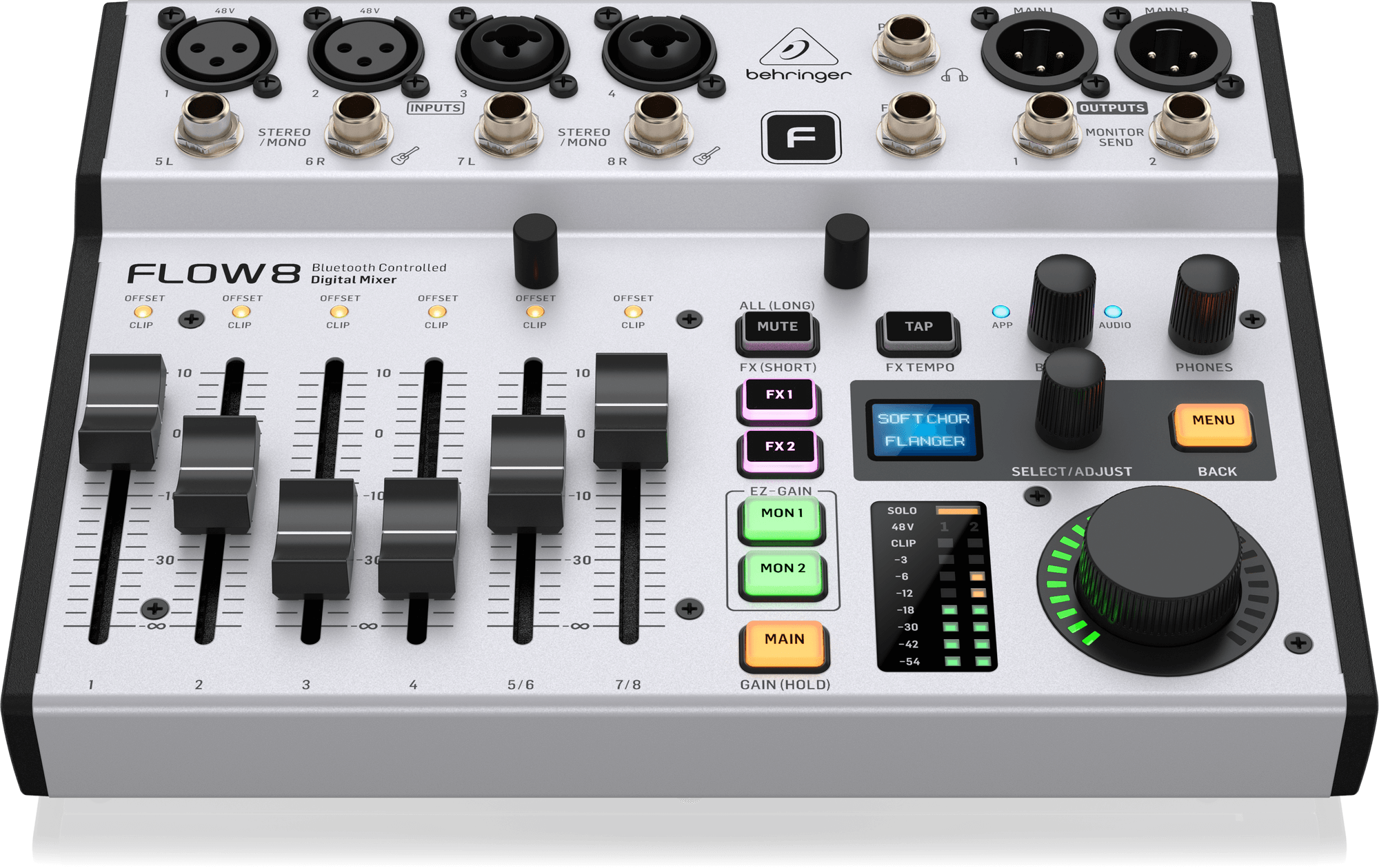 Some will recall that I recently specced a FLOW8 as part of a church install I've been working on.

The install is now complete with first proper use today so I though I'd share some thoughts.

I make no pretence that this is a conventional review so it will inevitably be partial and incomplete and will not explore those aspects for which there's no need in this application.

As you'll see from the image above, the control surface layout is simplicity itself. And that's ideal for the application for which I wanted this unit. Most of the users want to turn up, switch on all the kit and adjust faders if needed. Anything else, they don't want to know and could easily cause problems. No buttons to push or knobs to twiddle means the likelihood of getting in a tangle with the system deafeningly feeding back nicely or totally silent is all but eliminated.

All the tweaking and twiddling - apart from the most rudimentary of stuff - is done via the app. This is available in Android or iOS form and is linked to the mixer by a separate Bluetooth link - the mixer has two 'Bluetooths' - one for the app and one for music playback.

On the subject of the app, I've tried both versions. I haven't done a detailed analysis, but while it's worked flawlessly on my new iPad and previous gen iPhone, it didn't like my Android 6 tablet and only gave me partial control.

But once loaded I found the app worked with no glitches in operation or Bluetooth dropouts. The screens are simple and uncluttered - which is probably just as well if you're working from a phone and I found that the touch faders and other app controls were smooth in operation.

Via the app you have access to a variable high-pass filter, gain control, pan, individual phantom switching where appropriate and a simple 'one knob' compressor. I only tried this on relatively gentle settings for switch and it worked well with no artefacts. There's also a simple 4-band EQ, which you can switch to parametric if you choose. Mutes and solos are also available.

The main outputs have a 9-band graphic which can also be made parametric if you want.

My concern about the app is that there are no instructions provided at all - or none that I've been able to find. That's no great problem for me as an old sweat, but if you're new to things audio I think you'd struggle. That said, there are some preset 'typical' application settings that you can call up if you choose to.

You can store various banks of settings and recall as appropriate.

The effects engines appear useful - although they're not relevant to the purposes for which I bought the mixer. Of course, you've got the usual, "Wow!" stuff that you'll like when you try it, but will never use in reality!

The app follows well the movement of the physical faders, but as the faders aren't motorised, it doesn't work the other way around. But as soon as you take control of any fader via the app a warning light illuminates above the relevant physical fader. The physical fader is inactive until you move it to the same position as 'reported' by the app. At that point the warning light extinguishes and manual control on the mixer is enabled once more. It sounds complicated, but in reality it hasn't been a problem.

Incidentally, the faders feel solid and have a smooth action with no grabbing or snatching.

I 'baby-sat' things today and was able easily to make discrete and necessary adjustments to gain, EQ etc. via the app following install and set-up test a few days ago.

I pre-ordered this mixer with some trepidation before it became available as it seemed to have the right combination of price and simple/more complex operation that had been conveyed during my fact-finding and speccing with church leaders.

I'm pleased with what we've got and would not hesitate to get one for my own use if I was in the market for such a mixer.

As I said at the start of this piece, it's subjective and partial because I've not explored all of the features, but if you have any questions I'll do my best.

There are some YouTube reviews out there... Some are informative; some less so.

For anyone who's interested the full set-up is as follows:

All cabling installed to my spec by the contractors installing a new lighting system - or nearly! The didn't affix the specced BNC connectors to the antennae leads or give long enough tails at the rack end. Fixed with some ladder-work and ingenuity!

I think the thing that troubles me is when you say that the app is a requirement for all but the basics. Phone OS changes are frequent, and many is the app that has become unusable overnight due to OS updates. There are some apps I still mourn years after they were broken.

That's a fair point Paul, but I think that in this specific application once the system has been fine-tuned for the limited set of voices there will be little need for tweaking.

If the app becomes u/s then the system will still work...

BTW, the new lighting system is also app-based... incredibly versatile from the quick demo I was given when installing my stuff last week...

Maybe Behringer will bring out a bPhone to run their apps on?