Print view
For feedback and suggestions about the SOS magazine, app, web site or forums.
Post a reply
11 posts • Page 1 of 1

I presume they were originally supposed to point to the three different coloured lines , but as it is, they make no sense. Maybe they worked when the graphs were bigger, but as it appears in the magazine, they are simply wrong and seem to infer the arrows indicate the positions of 2nd and 3rd harmonics. 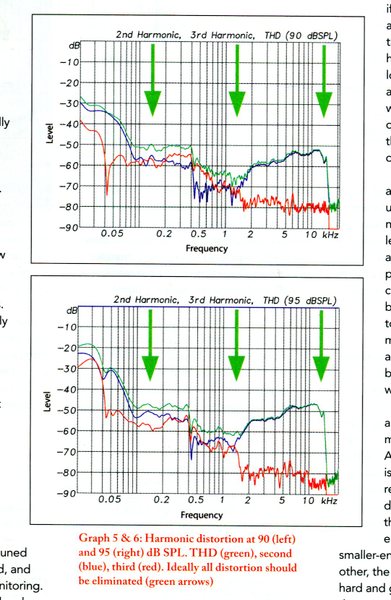 The green arrows should go, as well as the 2nd harmonic, 3rd harmonic and THD text along the top of each graph, just leaving the 90 dB SPL and 95 dB SPL text. 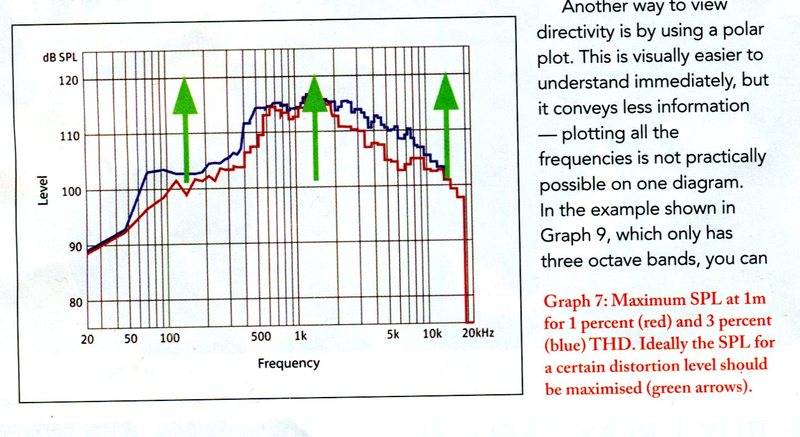 They point to nothing, and the caption text again confuses the issue further. "Ideally, the SPL for a certain distortion level should be maximised (green arrows)".

I'm not at all sure what is being said here, unless it's along the lines that ideally, the SPL level should be the same for all frequencies for a given THD value. If so, that certainly isn't conveyed in the graph + text.

Could someone have a look at this and hopefully update the web version?

Without seeing the associated text I actually find the graphs quite confusing anyway.
... but then I'm easily confused, some would say.

I must admit, I briefly stumbled over the graphs when I first looked over the subbed article, but then realised the intention from the article context. So Sam is quite right: the arrows are intended to suggest all distortion should be reduced in the first and SPL maximised in the second.

Here's a response direct from the author:

Andrew Goldberg wrote:The arrows are there to indicate that distortion at all frequencies should be minimised, i.e. all the lines should be a low as possible on the graph.  Ignore that they happen to line up with the text at the top of the graph.  This is completely coincidental.  I had not noticed that!  In the original word doc they were side by side but they got moved during layout and the text was not revised to reflect this.  Apologies for that.

For the SPL graph the opposite is true, the lines should be has high as possible.  Here there is no text in the header to cause confusion.  The SPL lines do not need to be flat, they just need to be as high as possible so there is headroom in the system.  The closer one is playing the audio to the displayed lines the higher the distortion will be.

I hope that clear up these points.
Cheers,
Andrew Goldberg

The harmonics titles across the top were originally part of the key to the graph colours. It was an unfortunate coincidence that they happened to line up with the arrows.

In hindsight, the graph could have been illustrated in a better way -- perhaps with a single fat arrow, for example... But it wasn't.

We'll look at making the Captions more explicit for the online version.

Quite a lot of such graphs simply have heading text 'Lower is better' or 'Higher is better' as appropriate. No possible confusion then.

I don't have anything to add to the graph discussion, but I just wanted to say that it is great to see someone with the knowledge and experience of monitor design that Andrew Goldberg has writing in the magazine. Mind you, with the likes of Phil Ward and Hugh writing for the mag it already set a high standard for monitoring expertise.

I just ignored the graphs. The article was a great articulation and helped focus my understanding greatly. It also inspired me to take the first steps in room treatment and I spent much of the day working at getting my first reflections and ITD under control. (see: https://www.soundonsound.com/techniques/sos-guide-control-room-design

Fortunately I see all kinds of rationalizations that clearly justify buying the KH80's I've been drooling over. I hope I get a discount!

I need to re-read it a few times with a second tab for ongoing duckduckgo searches because bits of it are in a language my brain struggles to comprehend, but that's my problem not SOS's!

Seriously though, it's a an enlightening piece and one I'll gain much from. I love to see this kind of content :thumbup:

James Perrett wrote:I don't have anything to add to the graph discussion, but I just wanted to say that it is great to see someone with the knowledge and experience of monitor design that Andrew Goldberg has writing in the magazine. Mind you, with the likes of Phil Ward and Hugh writing for the mag it already set a high standard for monitoring expertise.

Careful James, the last thing anybody wants is me strutting around Brighton feeling pleased with myself :-). Andrew's piece is really great by the way and I for one would commend it to anybody with the slightest interest in speaker specs.