Music on cassette tape made easy Skip to main content

Music on cassette tape made easy

Re: MUSIC ON CASSETTE TAPE MADE EASY

ef37a wrote:Buying from a 'hi fi' dealer might get you a well serviced deck but of course you will pay extra for it.

A lot extra Dave, the world of secondhand hi-fi is worse than the world of vintage synths, there are some very unscrupulous dealers out there that are really, just taking the piss.
A lot of it gets shipped out to Japan the Far East and Russia, where there’s money, honestly, it’s a wonder we have anything left in this country anymore.
About tape deterioration, it is a reel-to-reel thing, I’ve never had it with cassettes, I had 50 reels of 2 inch Ampex 456, almost all of them had gone sticky, although a few reels of Scotch were perfectly fine, I think the worst offenders were Ampex.

Re: MUSIC ON CASSETTE TAPE MADE EASY

HomerJSimpsson wrote:Beware of old tapes and cassettes. Through time, moisture from the air settles on the tape makeing it sticky almost like glue. Therfore its usualy much 'harder' to rewind old cassettes. Playing them put heavy load on the motor and mechanics, it can overheat and get damaged. You may even hear the music slowed down from the tape.

There's supposed to be a trick using a microwave to boil off the moisture, but I never tried that.

I think this MIGHT be a confusion with "Sticky Tape Syndrome" as it affected certain brands of OR tape?
I must have over 200 cassettes recorded some 40-50 years ago and whenever I pull one out to check it is always fine. These are a range of makes, TDK, Maxell, Philips, BASF, 3M, and a many strangers!

If they are stored so no watervapor reaches them, then they should be fine. Try one's been lying around open in a car, every time it plays'little slower.

They are stored in their cases, in a case in a normal house. I would think master tapes would normally be wrapped in poly and in a well fitting box and the valuable ones in an airtight and fireproof safe. STILL went sticky!

Dave, I took about 90 rolls of 2 inch out of the skip in front of the old Decca Studios in Broadhurst Gardens, along with goodies like stage boxes and multi cores, mic stands, and lots of other stuff no one wanted.
I sold the tape only to have most of it returned, it was embarrassing to say the least. I had a few reels of Scotch 226 that was fine, it was the Ampex 456 that was the problem.
A friend of mine has built his own tape over now, and that has come in useful a few times.
Regarding cassettes, it’s always the mechanisms not the tape that have given me trouble.

Arpangel wrote:Regarding cassettes, it’s always the mechanisms not the tape that have given me trouble.

Same here - changing the cassette housing is very common before transferring a tape but finding a sticky tape is very rare. In fact I think I only ever had one batch of cassettes that went sticky and they dated from the late 70's.

Arpangel wrote:Regarding cassettes, it’s always the mechanisms not the tape that have given me trouble.

Same here - changing the cassette housing is very common before transferring a tape but finding a sticky tape is very rare. In fact I think I only ever had one batch of cassettes that went sticky and they dated from the late 70's.

Yeah, no problems so far with any of my old cassettes, I’ve also got reel-to-reel masters on Racal Zonal tape from the mid 70’s that still play fine.
Which reminds me, I’ve got a space that’s waiting for decent reel-to-reel.

Which reminds me, I’ve got a space that’s waiting for decent reel-to-reel.

ef37a wrote:Which reminds me, I’ve got a space that’s waiting for decent reel-to-reel.

Yes please, although a stereo two-track would be nice, like a Studer A80 may be.

Arpangel wrote:Which reminds me, I’ve got a space that’s waiting for decent reel-to-reel.

I think there must be a few people thinking the same. I've been keeping and eye out and prices seem very high at the moment.

Open-reel playback has come into vogue with the nutter high-end hi-fi brigade, so there's a strong demand and as a result they are all paying very silly money for any decent pro machines that comes onto the market.

A former BBC colleague who runs a tape machine repair/alignment service is completely swamped with work, 95% of it being from hi-fi people. One of his customers has THREE ex-Beeb Studer A80s in his living room -- and he's not that unusual, apparently.

For anyone not familiar with the model, an A80 is not a compact machine by any stretch of the imagination! 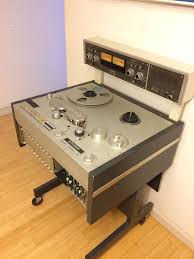 A lot of his work goes beyond the necessary mechanical and electrical maintenance. He's regularly being asked to replace original side panels with new granite or hardwood pieces, for example, and to have top-plates and other hardware re-polished and re-anodized to bring 30 year old tired machines back to looking like something approximating new.

People are spending more on refurbishment than they are on the machines themselves...

...and then they're spending several hundreds of pounds a time on importing second or third-generation* copy tapes under the impression they're 'master tapes' so they can listen to and marvel at the sonic wonder of pure-analogue....

*To be fair, the better companies (like the one above) do go to big efforts to minimise dub losses by making a 'production master' on a 1-inch format to minimise tape hiss from the source 'master tape' (probably a second-gen copy safety master in most cases). So the retail tapes are more like 1.5- (if it was the real master tape) or 2.5-generation dub copies.

I'm sure they sound lovely in their own way, ... But the OPUS master tapes I reviewed was decidedly noisier than either the vinyl or CD copies I have of the same tracks! (And it's not my A807 machine being magnetised or anything silly like that because if I record and playback the CD directly on it here it sounds much less noisy than the Opus tape!)

Well, that's putting the vinyl hipsters to shame if nothing else :D

Hugh Robjohns wrote:One of his customers has THREE ex-Beeb Studer A80s in his living room -- and he's not that unusual, apparently.

Hmm - I wonder if there is a Reel to Reels Anonymous? :bouncy:

I currently have 7 machines in the living room here (though no big Studers) but not all are mine.

My feeble collection comprises just an A807 and an ASC PR99mk3.