Output Impedance in Ohms and its meaning Skip to main content

Output Impedance in Ohms and its meaning

Print view
Knowledgebase READ-ONLY collection of topics moved from other sub-forums to preserve them from auto-pruning. Only Moderators can start/reply or move topics into this archive.
Post a reply
8 posts • Page 1 of 1

Output Impedance in Ohms and its meaning

I'm trying to ascertain if I can use the Output 9-10 on a Fireface 800 (the headphone output) to feed a click track to an IEM transmitter for a drummer.

According to the manual the 1-8 line outs are:

So the output levels are roughly comparable but the impedance is not. I don't however understand ohms etc and what this means in real terms. I assume the headphone output is no longer line level and is perhaps insufficient for the IEM transmitter?

I could use output 3-4 instead, I simply don't have long enough cables to get to the transmitter for that! Will happily buy if necessary.

Thanks for any thoughts.

siderealxxx wrote:So the output levels are roughly comparable but the impedance is not. I don't however understand ohms etc and what this means in real terms. I assume the headphone output is no longer line level and is perhaps insufficient for the IEM transmitter?

Both are nominal line level, albeit with slightly different digital/analogue alignments. Line level is defined either as 0dBu or +4dBu, depending on where you live and what you're doing.

This is all fine, but how does it relate to impedance?

The general rule for modern analogue signal interfacing is that we employ a 'voltage-matched' configuration.

A lot of the confusion with impedances relates to the concept of 'impedance-matched' interfaces which dominated pro-audio until the early 70s because we borrowed the core technology from the telephone industry where impedances make a big difference due to the length of telephone cables involved between cities!

However, while this concept is still valid in telephony, RF, video, and for digital audio interfacing (where very high frequency signals are involved and where, in relation to the signal wavelength, extremely long cables are being used), it is completely obsolete and irrelevant in the analogue audio studio interfacing world.

So... in a voltage-matched interface environment the requirement is to ensure that the signal voltage generated by the source is passed in its entirety (or as close as we can get) to the destination. (This is definitely not the case in an impedance-matched system!) 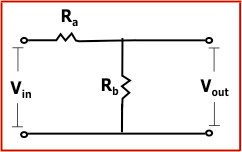 So, to maximise the received signal voltage, Ra should be as low as possible and Rb as high as practical... and the typical implementation is to make Rb about 10 times greater than Ra.

Whereas a mic is (normally) only ever connected to one preamp input, it is not unusual to need to distribute a line level signal to multiple destinations (eg, several tape recorders, and a monitoring system). For this reason, line inputs are sometimes referred to as 'bridging inputs', and the idea is to enable the passive splitting and distributing of one line-level source output to feed several destinations simultaneously. Multiple destinations can then 'bridge' the input signal without 'loading it down'.

Parallel resistances act to reduce the overall resistance, and so two identical destinations will result in a halving of the total combined input impedance, four will quarter it... and so on. This means that slightly more of the signal voltage will be developed across Ra and less across Rb, thus reducing the received signal voltage.

Consequently, it makes sense to have as high an input impedance as is practical so as to minimise this reduction in signal level which inevitably occurs when additional units are wired across the same source!

To put some real-world numbers on this, if the source's output impedance is 100 Ohms, and the destination equipment all has a 10K input impedances, then splitting the signal to feed two devices results in a signal loss at each input of just 0.17dB, and you could share it between six devices and still only lose 0.5dB overall.

... and that's why bridging inputs with high impedances are so useful! But I'm heading off on a tangent here, so... relating this back to your original query (at last, you cry!), the output impedances of the two options are both below 100 Ohms, which is typical and fine and of no concern at all.

However, the spec you haven't checked -- but actually the more important one -- is the input impedance of the IEM system. As you can see from the above, as long as that is more than 10-times the 30-75 Ohm output impedances of your interface ports all will be well, so anything more than 1K Ohms is great and you won't have a problem... In reality, I suspect the IEM transmitter will have an input impedance more like 10-50K Ohms anyway.

In other words, there shouldn't be a problem at all... ;) Just be careful when setting the levels...

If I may?
The other area where "impedance" causes endless confusion is speaker "matching" and especially with valve output stages.

For a hi fidelity valve amp the source impedance will be very low, usually under one Ohm. However for a valved GUITAR amplifier it will be much higher. A 15 to 30 watt amp without feedback could well have an output impedance of 60 Ohms though most are around 20-30.
Even a big 50-100W amp with feedback will still be 10 Ohms or more. This is not as confusing as it sounds, just connect the right speaker to the right impedance on the amp! (this is not nearly so critical as many amp makers tell you but generally, do as you are told!) . So the "matching" really just means, match the numbers, electrically it is nonsense.

Transistor amps have an almost zero output impedance and can run any speaker impedance down to that given in the manual.

Hugh Robjohns wrote:
In other words, there shouldn't be a problem at all... ;) Just be careful when setting the levels...

If there were some sort of award for most detailed forum answers on the internet, I'm pretty sure you'd be in the running Hugh!

That certainly answers my question, and then some. Might have to digest some of it later... right now I have scores and backing tracks and guitar parts and vans etc to contend with!

As long as we have enough gain to the IEM transmitter then that's one less thing to worry about! Unforuntately it's not mine so will try and find out the input impedance anyway.

siderealxxx wrote: That certainly answers my question, and then some. Might have to digest some of it later...

Tiz all about the eddukayshun, innit...


You mean Pink Floyd lied to us?!

To be fair, the double negative should have given it away...