@Wonks
Yep the whole neck/bridge setup is a fog to me at the moment. I asked my brother how we were going to do this and he said don't worry your pretty little head about that for now - get on and make the back. He's been building and restoring stringed instruments for a living for over 25 years so I'm going on trust.

But I don't think we'll be able to rely on the scale lengths of the two guitars being identical, so using the existing bridge position probably not an option. Hmmm...

If you knew the Tanglewood model you could look up the scale length from their web site - but that's on the sticker on the inside of the back - which I presume you haven't got.

You can easily measure the distance from the nut to the crown of the 12th fret and double it to get the nominal scale length of the neck you do have.

These from a few weeks ago (I get to visit the workshop for a day or two a month, so it's going to be slow progress).

Planing the back ready for jointing: The edges to be joined need to be absolutely straight and square. 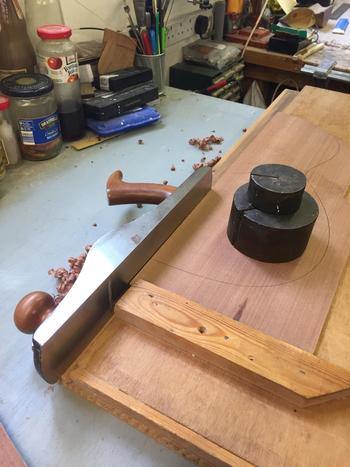 and gluing the back: 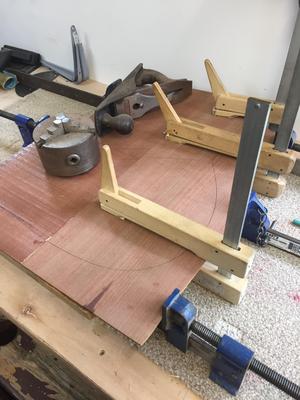 And then when the back is dry, thicknessing. Since I have limited time in the workshop I'm using the sander rather than planing/hand sanding as Zen did in Project Uke. 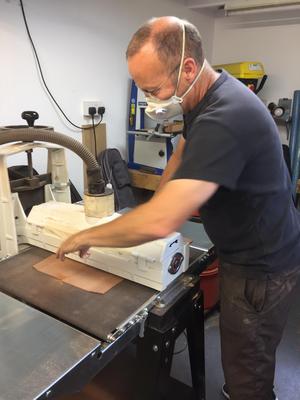 And here are the glued, thicknessed front and back, cut to rough shape on the bandsaw. The remaining sawcut mark on the back will be hand sanded out. That will be the inside of the back. 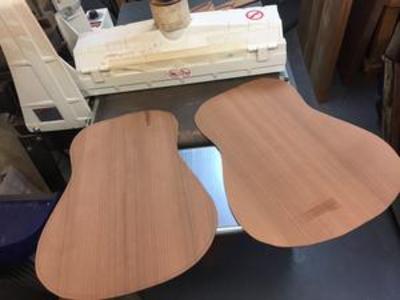 You could always assume that the 14th fret would have been on the neck/body join and measure the distance from the bridge to the body edge. You can then use the StewMac fret calculator to work backwards and try and confirm the likely scale length. http://www.stewmac.com/FretCalculator

Looking at the Tanglewood web site at their dreadnoughts, they all seem to have a 650mm scale length (25.6"), so that would be my first guess at the scale length of the body.

Nice pics. Great to have access to a proper workshop, makes it all so much easier.

ooh - I do love following a project, even if I don't understand all the guitar-y technical bits 8-)

Good luck Adrian - may your wood never go against the grain :beamup:

Sorry I thought I'd posted a reply but obviously not! Thanks for the suggestions, I'll let you know how we decide to go forward next time I'm there. I'm thinking maybe make a jig that allows me to measure and mark the bridge position on the top accurately rather than assume anything. And yes having the tools and expertise on hand makes this feasible for me. It's a double edged sword though because (a) I don't have any excuse not to do it and (b) My brother will not allow me to bodge anything - not that I want to.

Thanks :) Looking at the standard project milestone chart I am currently at "Enthusiastic and Unwarranted Optimism". Next comes "Ignoring Reality" and "Changing the goalposts". ;)

So are we going to see a full scratchbuild now? :)

..including spinning your own aluminium cone and casting a spider?

Wonks wrote:..including spinning your own aluminium cone and casting a spider?

Why not? I mean how hard could it be? What could possibly go wrong??? :headbang:

Gluing centre seam reinforcements for the back. These are pieces of waste wood from cutting the back to shape, glued cross-grain on the seam. I clamped a steel ruler to keep them in line then removed it to clean the glue up. 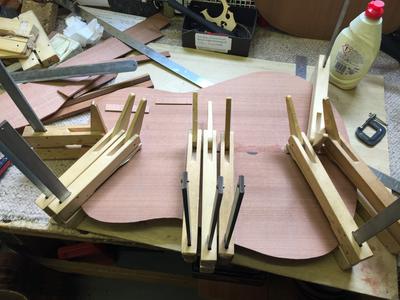 All the reinforcements glued and neatly chamfered. Why shape them I asked? You can't see them on a resonator. It's to keep the weight down, all these little shavings add up. And just because you can't see them doesn't mean they shouldn't be neat.. 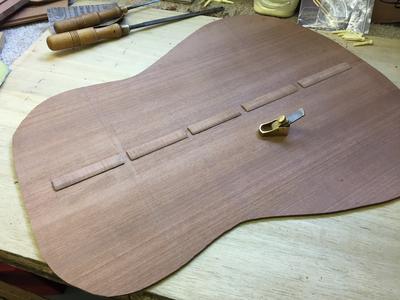 The last thing I managed to get done last week was start the back bracing.

The braces are rough cut to size then a 3mm curve planed on the longest brace. That is then used to mark a curve on the other braces. Hopefully they all ended up about the same... 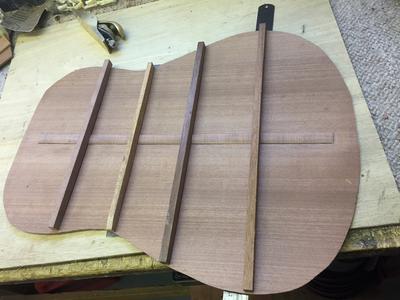 And here are the first couple being glued, curve side down. There is a steel rule under each joint to help spread the clamp pressure. 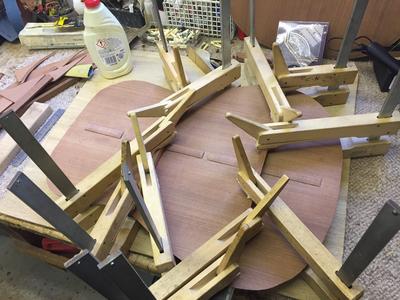 That'll be it for two or three weeks now.. very frustrating!

The bracing I've seen on resonator backs differs somewhat from normal guitars. I presume this bracing takes into account any support posts that need to be fitted between top and bottom of the guitar? The huge hole in the top does weaken it considerably.

Yes, even though I'm doing this as a learning exercise and being given 'do this, then do that' instructions, when I started I did the usual look around the internet to get some idea of what I was in for. To be honest I just became (more) confused, there are many approaches and since I am not starting from scratch it's not easy to see which would work best without having tried them. This is more like a restoration project with a Frankenstein twist. So I'm relying on my brother's experience, and since he's always experimenting I'm sure he's using me to try out some ideas.

So for the back bracing question, we are not going to use a soundwell that goes from front to back so we can brace pretty much as normal, and also put a radius on the back. Instead, the soundwell/cone support will attach to a perch pole which I will have to joint into the neck and presumably the end block. The back braces are slightly less deep than standard to make this easier. No idea how I'll do this yet but brother (Colin) is not perturbed. He hasn't seen me with a chisel though.

Supporting the front, as you say there's not much left once you cut the hole for the cone. I'm not sure whether the perch pole will be man enough, but I'm assuming we can reinforce if needed with posts.

Having said that though I think we might be aiming for a construction where the back will be allowed to vibrate. There seem to be different opinions about this, I have read that the body should be rigid and let the cone do the work, others disagree. As usual with the internet, pick your prejudice and then find views that support it!!

I'm trying not to worry too much about the next step as I go through this, just focus on the task in hand. But it's hard not to think about how I'm going to get that neck on, at the correct angle (won't be the same as a standard dreadnought), with a perch pole at the right height, etc etc. I need to be more zen. In fact I need to be Zen :D