This month's lesson is don't rush things, focus on what you are doing, and a little planning goes a long way.

Didn't have a lot of 'me' time in the workshop this visit and much of that was taken up with fixing my mandolin. Dropped it recently, not too badly damaged, a small split in the top near the edge and a crack in the binding, nothing superglue and a partial refinish couldn’t fix.

But I wanted to make some sort of progress on Frankenbro. I had a couple of hours before I had to be somewhere else, should be time to replace the plastic fret markers with something a bit nicer. We’d previously ransacked Colin store of bits and found some 7mm awabi dots to replace the 1/4 inch plastic and some 3mm ones for decoration.

So first I drew a centre line up the fingerboard, which revealed that the original dots were 1 to 1.5 mm south of the centre line. 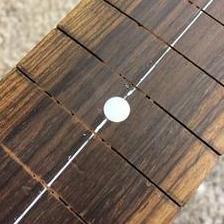 This kind of thing drives me nuts. Of course it doesn’t make much difference, I hadn’t even noticed till I measured it. However I really didn’t want to intentionally put the new dots in the ‘wrong’ place, but I would have to unless I bought some bigger inlays. But that would be against the ‘use what you can find’ ethos.

So I grumpily re-drew a line that was about .75 mm north of the existing dot centre at the 15th fret, less at 3rd. I calculated I could move it that far and the 7mm dots would still cover the slightly smaller 1/4 inch plastic ones, and it would be nearer to centre. I then drew lines for the 3mm dots, scaled in line with the two existing dots at the 12th fret. See the fallacy in all this? (a) probably nobody would ever notice, and (b) what’s the likelihood I can even drill to .75 mm accuracy on my first attempt at doing this? 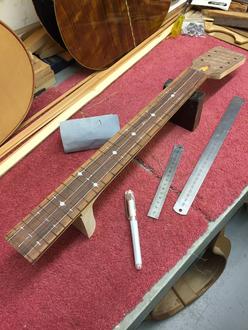 All this faffing about was wasting time. Need to crack on. Using a sharp bradawl I made guide holes for the drill, fine on the rosewood but didn’t work so well on the plastic, more like dents than holes. Oh well I would just have to be careful drilling those.

I then drilled the 3mm holes about 1.5mm deep making sure they would leave the new dots slightly proud, put a drop of superglue in, popped the new dots in and pressed home with the flat of a screwdriver. 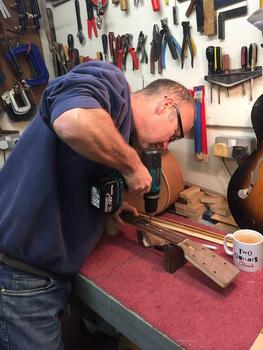 16 out of 17 went in pretty well, one I managed to drill very slightly out of line. Blast!

Quickly on to the 7mm dots. The first one is a problem though - despite taking it fairly slow and easy the bradawl hole isn’t enough to guide the drill centrepoint and I slide off into the wood. Not helped by the fact that I'm steadying the neck with one hand while drilling with the other. 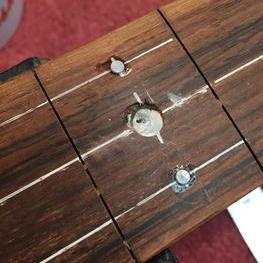 Colin has a look that for once isn’t instantly reassuring. Hmmm is all he says. He searches his assorted fret markers and offers me a larger snowflakey shaped one made from pearl. The irregular edge might help hide the damage to the wood. So on top of having dots out of line I will now have one dot different. I will never sleep again.

Using a 1.5mm bit I drilled a pilot hole in the crater of my last attempt. While I was at it I drilled pilot holes in the rest of the plastic dots (what I should have done in the first place). Col then held the work so I could get two hands on the drill, and I used a 9mm bit to drill out for the snowflake. However the bit caught the edge of the hole and split off some small fragments of rosewood. Looked a right mess. I ploughed on and glued the snowflake in. I have some filling to do. 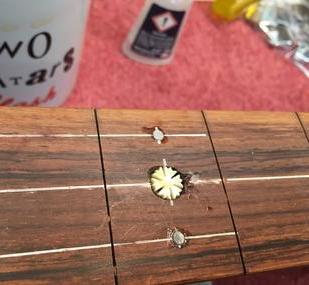 While Colin held the work I drilled out the rest of the dots with a 7mm bit, which went ok. Lesson - secure the work properly, make sure the pilot holes are good, don’t rush.

These are important lessons, that all of us learn, generally several times, and generally as a result of forgeting the previous time...
Looking forward to seeing how you sort this out, I know you will. :)

I filled the damaged area around the snowflake with superglue and rosewood dust. Where that hadn't filled completely I pushed in some coloured wax. Not great but if you don't look too closely....

I then sanded the neck to clean it up and bring the other dots down level with the fingerboard. And that's it for another month. 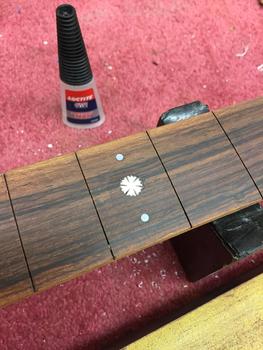 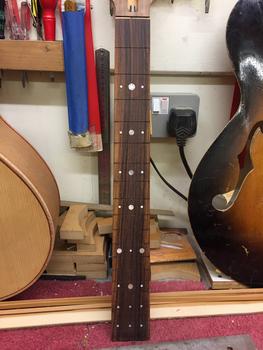 blinddrew wrote:Looking forward to seeing how you sort this out, I know you will. :)

..with a little help from someone who knows ;)

blinddrew wrote:These are important lessons, that all of us learn, generally several times, and generally as a result of forgetting the previous time...

Yes - annoying that we have to keep making these mistakes!!!

Well, you can always practice by drilling out all the round dots and replacing them with snowflakes so they all match! ;)

Haha well it did cross my mind :mrgreen:

But Colin only had one and I’m not buying any. He did have a few singles of various shapes so I could have gone random... now there’s a thought...

That looks great to me Adrian - it's amazing what sawdust and glue can do for you, isn't it? (answers on a postcard please, to the usual address ;) )

Wow that looks like a brilliant repair, I'd be very happy with that!

As an aside I've just done something similar to fill holes in brickwork. I've no idea why the previous owner felt the need to drill quite so many holes for a light fitting but with clear silicone and some red brick dust, much tidier.

That looks great to me Adrian - it's amazing what sawdust and glue can do for you, isn't it? (answers on a postcard please, to the usual address ;) )

It does look nice. I recently acquired an old 70s Fender 12 string from a local shop for a song. It needed a lot of work and like a lot of old mistreated 12s a lot of meat off the bridge.

The chisel slipped :? But on closer inspection it had formed the shape of a small almost perfect arrow-head. So I filled it with bone dust and superglue and it came up a treat.

So if you ever see a Fender 12 with a bone arrow inlay just below the bridge... that's mine.

Its a feature, as they say in the building trade.

Alba wrote:Its a feature, as they say in the building trade.

It’s these ‘features’ that make instruments unique and interesting I guess. And at the end of the day it’s really about how they play and sound anyway.

Time to start fitting the neck to the body. First off I have to cut a mortice in the heel to receive the perch pole. After marking out the position I removed a fair bit of the wood using a forstner bit in a pillar drill, setting the stop for 20mm. 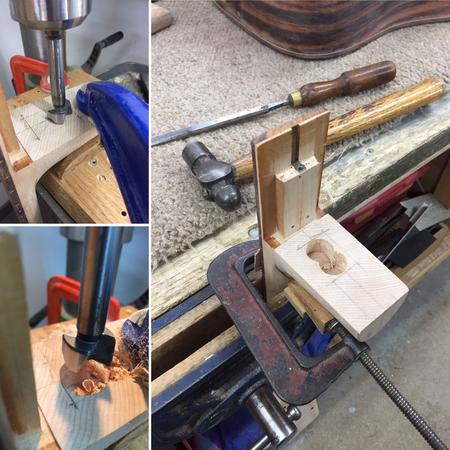 I then chiselled out the remaining wood until the perch pole fitted: 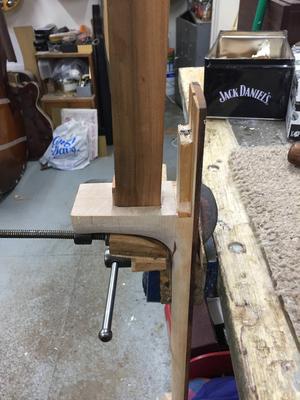 ..and then test fitted the whole thing: 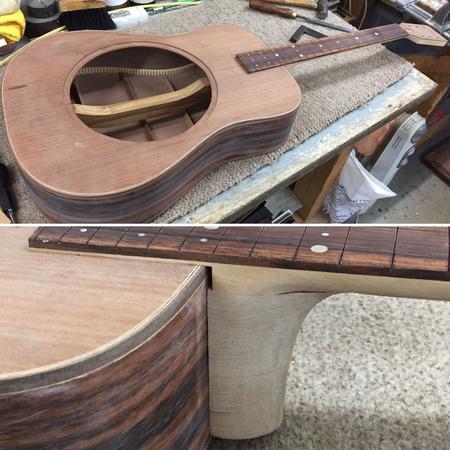 Then it was a case of slowly taking down the heel using whatever worked best (small plane, chisel, file), maintaining the angle as measured between the top and the sides, until the heel fitted snug against the body. Nearly there: 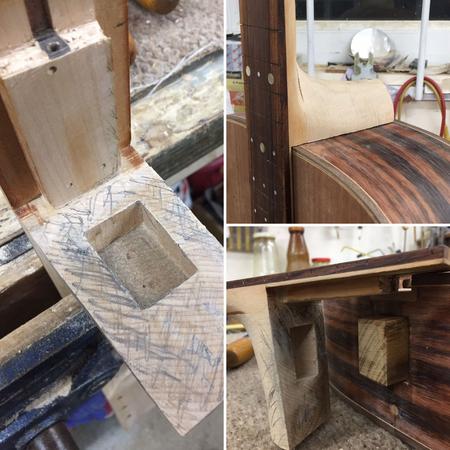 It's just a case of test fitting, taking off a tiny bit more wood from the heel, or from any parts that are stopping the neck from fitting snug. Just a little bit more to do, but I ran out of time and I learned my lesson from last month trying to get too much done in a hurry ;)

Won't be long until you are stringing up and playing :D

Ah!
The most dangerous phase of any long-term project. be careful.