Hello All. I am looking at an amp to power some sealed cost effective monitors I was planning on purchasing.
-Passive NHT SuperOne 2.1 2-Way Bookshelf Speaker Monitors x2
-Passive DIY Auratone for Mono Mids

Here's my question. Can I use a cheap Amazon amp to power these? Something like https://www.amazon.com/Amplifier-DROK-Dual-Channel-Subwoofer-Adjustment/dp/B01N1UHTU1/ref=sr_1_3?ie=UTF8&qid=1548261955&sr=8-3&keywords=amplifier+board Will those amps color the EQ or keep the signal flat? Is there any other reason not to use a barebones amp board? Any specific chips I should look for? I don't have any old hifi amps around. If I did, I'd probably need one with a flat EQ setting right? Any other ideas? Requests are sealed monitors that are passive or active. $200 for the NHT monitors and $18 for the amp. I have an old Amazon amp laying around from Christmas I could use. Thanks all. 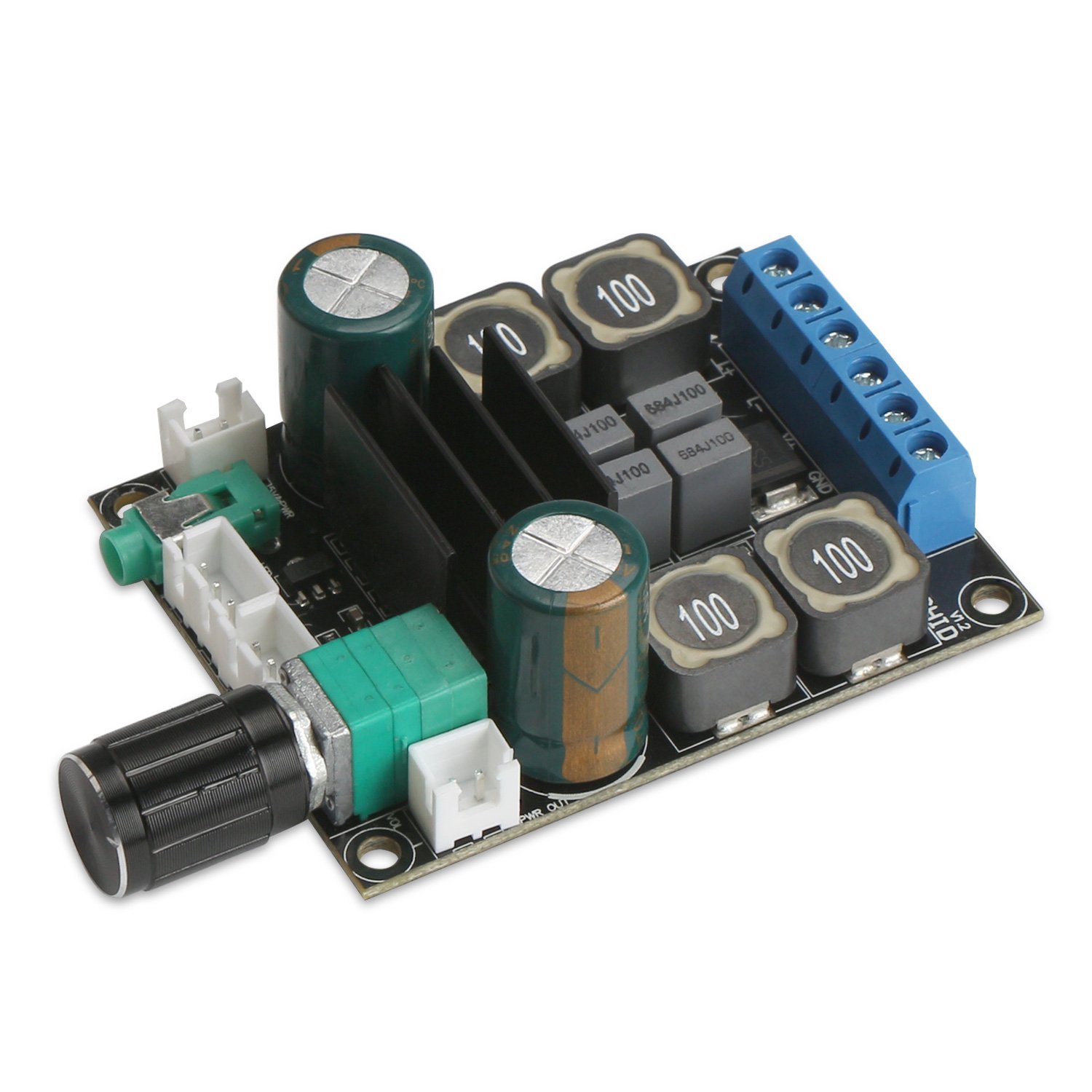 No ideas? This would all be for mixing. I'm thinking of having REW play out pink noise and feed it to line in to evaluate. That way I can compare the two. It would be purely objective. If I'm not lazy, I'll post results.

I have never used REW before, so i will have to work with the settings and hope they are adequate.

Does Win 10 apply EQ to line out? Any way to make sure off?

TBH, why? They would probably work ok but one of these would work at least as well (actually I have one and it's remarkably good) which cost about £35 https://www.amazon.com/TDA7498E-Audio-Amplifier-Receiver-Integrated/dp/B077GWVHHN/ref=sr_1_3?ie=UTF8&qid=1548357394&sr=8-3&keywords=mini+hifi+amplifier

Sorry to rain on your parade but the NHT speakers are £101 each then you have to buy the amps. PSU and box plus various sundry bits. You can buy a perfectly respectable set of powered monitors from around £280-320 from Mackie, KRK or Adam (if you can live with a 5" woofer Scan have the KRK RP5 at £109 each) and save yourself significant effort and the risk (likelihood probably) of them not actually being very good and having virtually zero resale value.

By all means build the DIY Auratone, that makes sense for a 'grot box' but buy some proven monitors.

but welcome to the forum.

I can see the urge to get some closed box monitoring goodness on the cheap pkadler and I am all ears if its half decent.

Why Yamaha doesn't make a modern take of an active sealed box around £400-700 a pair eludes me. I could potentially know about 75000 people who would buy.

But maybe I just have to wait for the time when I can afford some Mini Rocks or or KH310's. And a room that deserves them...

I use a Cambridge Audio Azur-310A to drive the Auratone.

I like that it has a "direct" mode the bypasses the EQ so to have the sound as clean as possible.

Got it second hand for not that much and very happy with it.

Nothing to add directly but I am still watching this thread with interest. Whilst I completely get where Sam is coming from, sometimes it's nice to have a bit of a project and see what you can do. Building a single-speaker-mono-monitor is on my list of projects at the moment (somewhere around number 3 maybe!) so I'd certainly be interested in your results if you do go ahead with it.

Yep, no disagreement there, after the edit window had passed I though I should have asked pkalder the reasons behind the project. If it is simply to save money then my post stands, but other reasons might lead to different advice.

The amp board referenced looks like it will need a 25v DC power supply and a 4 ohm load to develop the full 25W. Running in to 8 ohms (a more typical monitor speaker impedance), the power per channel will drop to somewhere in the 15-18W region. Droping the supply voltage will most likely drop the output power as there doesn't sppear to be a voltage regulator on the board, just some reverse polarity protection diodes.

I'd guess that the power supply should be capable of providing at least 1000mA for single channel use, but 1500mA or more might be safer to avoid clipping at full output with a heavily compressed and limited mix.

There is then the question of what the 'watts' really are; continuous/RMS, music power or peak, as no qualifying units are stated. I'd be tempted to assume they are peak watts, typically 2x music power watts and 4x continuous/ RMS watts (the normal value given for a hi-fi amp. Peak power is often used to mske products look more impressive than they actually are. So it may give around 6W RMS into 4 ohms and around 4W into 8 ohms.

I'd be on the lookout for a used hi-fi amp from a well known manufacturer with a class A/B amp (high damping factor) and an EQ bypass function. If you are looking for a grot-box speaker to simulate cheap hi-fi and transistor radio speakers, then I would't worry too much about having a super-flat response amp, though I doubt a hi-fi amp will be much off flat with the EQ bypassed.

You should also be able to find integrated amps with the ability to feed the power amp directly, which will almost certainly give you the flattest response when fed from a good monitor controller.

Oh, and to add, those modules linked to in the OP appear similar to the amp I linked to in my first post. I have a Muse M20 TA2020 mini power amp and it is very good, I use it to drive my Kev LS3/A clones so they should work just fine. The NHT speakers OTOH are an unknown quantity and domestic speakers rarely make good monitors.

Wonks wrote:It is a class D amp, which means that whilst efficient, its output impedance is low, which means a low damping factor.

And the good news is that most 'audio-grade' class-D amplifiers actually do have an extremely low output impedance and very high damping factors.

I'm on holiday so only have my mobile, and am struggling with a virus and slight temperature so am not 100% with it.

I should caution that I am reading Sel's power amp book at the moment so rather full of "it"!

Nonetheless, Wonk's caution that the 25W spec' almost certainly means into 4 Ohms is well taken and in fact class D amps are even more load concious than linear ones and I doubt you would get even 10W into 8R. The speakers have a 125W rating. 10W will go nowhere.

Then, class D is largely only tolerated for sub woofers. Yes there are some high end class D powered monitors but I would think those are very highly developed amplifiers.

I have a 3U rack amp I built years ago with two 80 W* Maplin amp kits, The mains transformer is from a big Sony amp brother in law had burn out on him. PM me if you want it for nowt but you will have to come and fetch it! (NN5 5P*) Not hi-fi but sounded pretty good.

Self says output Z for class D is usually higher than a good class B amp. I don't think the filters help? He is not in any case a fan. He does not however put much store on striving for milliohm output Zs? He makes the point the the speaker sticks at least 5 Ohms in circuit for a nominal 8R speaker.

Sorry you're feeling groggy, Wonks. Why does that always happen on holiday?

This is potentially true at very high frequencies (by design, obviously), but not at the low frequencies where bass-driver damping is really important. Moreover, most audio-grade class-D amps employ a negative feedback path for the error-correction system which is taken after the filter* specifically to maintain a 'vanishingly low' output impedance across the audio band... As the unquestionably brilliant** Bruno Putzeys -- Chief Engineer at Phillips Class D Audio Systems Laboratory -- explains briefly in this Bryston article on the topic of Class-D amps:

* In the Hypex amps this feedback topology is referred to as PID or Proportional Integrating Derivative!

** I've met Bruno several times and am in complete awe of his knowledge in everything to do with Class-D amps. He's also the man behind the brilliant Hypex class-D amp designs.

Technical Editor, Sound On Sound...
(But generally posting my own personal views and not necessarily those of SOS, the company or the magazine!)
In my world, things get less strange when I read the manual...
Top
Post a reply
22 posts • Page 1 of 2 • 1, 2