Ah!
The most dangerous phase of any long-term project. be careful.

Hopefully learned my lesson last month, wood has its own ideas about how things will go...

Back to the workbench at last, having missed a trip in January.

Last trip I had got the heel/body joint to somewhere within spitting distance: 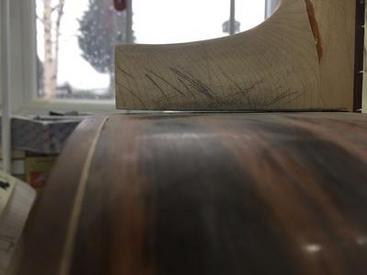 I thought I wouldn't have much more to do to get the neck on, well I guess it's better to be optimistic otherwise I probably wouldn't have started this. However. The maple on that heel is like rock, trying to to take off small amounts in a controlled way is a bit above my skill/experience level. See how white the knuckles are: 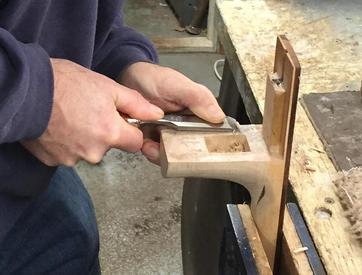 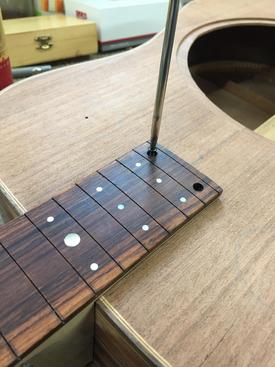 Then checked the centre line on the fingerboard to the one at the tail end of the body. Close, but not quite there: 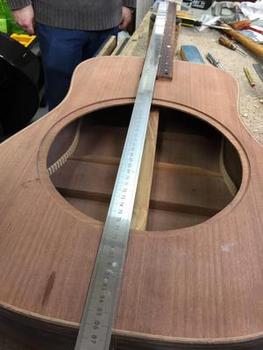 Another round of removing small shavings, filing, sanding, test fitting until it's all lined up. Great!

Now I had to check the action/neck angle. With the neck clamped in place I fitted the cone and spider and using a long rule between the bridge and the nut position measured the distance above the fingerboard around the 12th fret: 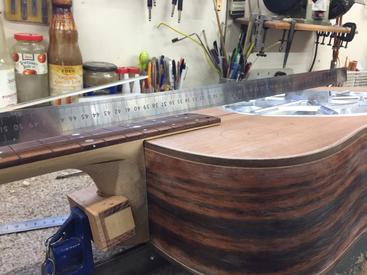 I had just over 5mm, or about 4mm above the frets when I eventually fit them. Even though I want a high action for (mostly) playing slide that'll be too much once the saddle is fitted, even allowing for string pressure compressing the cone. The neck is too flat to the body, I need it angled back slightly.

So, another round of removing small shavings from the rock hard heel, filing, sanding, test fitting until I have just under 3mm above the fingerboard at the 12th. It's a judgement call at this point whether to take more off but I decide to go with it.

Finally, what's the scale length like? If I've positioned the cone correctly I should have ended up with 642mm at the saddle. Seems like a long time ago that I made these measurements... 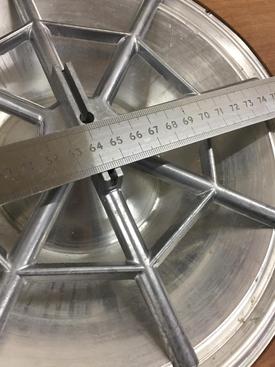 .... but all looks close enough. So Now I can glue the neck to the perch pole.

Just a case of using some epoxy to glue the perch pole to the neck and clamp it in place having masked off the body under the heel to protect against any glue squeeze out. 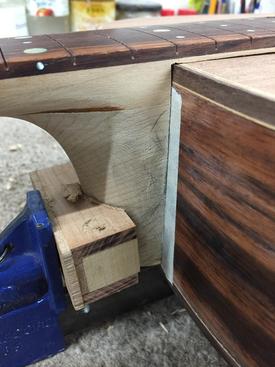 I'll need to make a shim to go between the body and the fingerboard to fill the gap made by angling back the neck, and the neck/perch pole joint will need more support (more epoxy to fill gaps and screw up through the heel into the tenon), but hopefully that's about there now.

I found that pretty tough. Col said I shouldn't feel too bad, I'm doing something more complicated than a scratch build (wish he'd told be earlier). Having a fingerboard in place and that wood around the truss rod end makes the whole thing more tricky. Come to think of it, a few pages back in this thread Wonks suggested I could take the fingerboard off and fit a shorter truss rod. Might have been the way to go...

Surely you want the spider slightly angled so top E is nearer the neck than bottom E to get a reasonable intonation? Which might mean that the spider is a now a bit too near the neck if the scale length is correct in the middle? And you'd normally need a longer length than the nominal scale length.

For a 642mm scale length, the StewMac calculator gives the nut to saddle distance of

...which is approximately a 3mm difference at the two E positions. With heavier strings (which you'll want for slide), then the bridge will need to be back a little bit more.

If you play purely slide, then it won't matter too much as you can compensate for distance and angle (though it makes it harder work). But mix some slide with some fingered notes and you really want the intonation to be as good as possible.

From the photo, it looks like that it's about 5mm too short a distance from the nut to the leading edge at the centre of the spider.

What you don't want to do is glue the neck on now and....

I've got a couple of mm wiggle room on the cone position if I need it, and the contact point on the saddle can be adjusted a little. But it is what it is at this point, I'm just going to have to go with it for now and find a way to make it work :)

You could simply cut the body in half from side to side, then add a 4-5mm section to make the body longer. :D

Of course since the neck is not glued to the body I could pack out the tail end of the perch pole which will push the fingerboard away from the bridge. I’ll need to make up the resulting gap between the body and heel, but I guess in the worst case it’s an option...

Are you able to rig up a tail piece, put a saddle in, fit the two E tuners, put some strings on and check the intonation? Whilst measurement is OK, there's nothing like the empirical test method.

blinddrew wrote:It's a blues guitar, it's not supposed to be in tune... ;)

And with my slide technique it’s irrelevant anyway! :tongue:

@wonks yes I agree, I’ll only really find out when I rig up a temporary saddle

Well doesn't time fly. Pretty shocked to realise that I last updated this in February...

There are a couple of reasons - other stuff going on meant I had to cancel or shorten some visits to the workshop, and I also kind of hit a bit of a mental blockage with the project. Having got to the point where I thought I had a reasonable fit on the neck, after some close inspection Col said he thought I could get it a bit better, to him it didn't feel quite right. And for him it has to be right, or as least as good as it can be. But I felt that things were now getting beyond my skill level. I had found the neck fit difficult and a bit nerve racking, it's like snakes and ladders, take too much off in the wrong place and you lose alignment etc and you can be back at square one. At least I could. It was also complicated by the fact that the neck was never designed for that body and the body itself wasn't true. I found it difficult to visualise which of the many touching surfaces within the joint was not quite right.

However I didn't stop completely, I just did a few easy bits and pieces and avoided thinking about the neck joint.

For example I cut a heel cap from an old bit of walnut, shaped the heel and glued it on .. 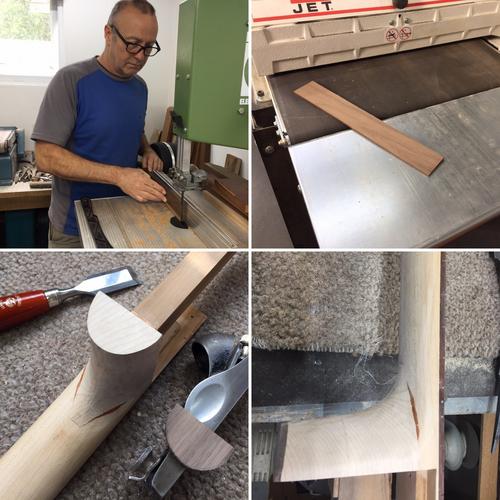 I also finished carving the heel, smoothing out the transition from the original neck to the new heel. Had to take a fair bit off the neck to do it, changing the neck profile in the process. 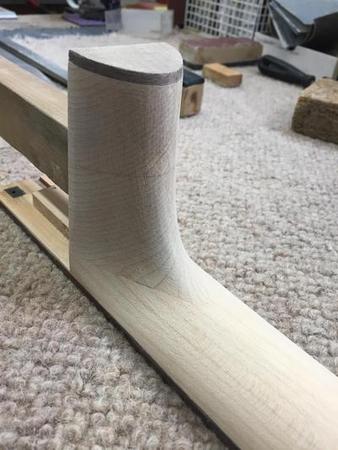 And then used a pillar drill with a Forstner bit to drill the body for the grills. I then enlarged the holes using an abrasive bit in an electric drill. The grills will be finally glued in later: 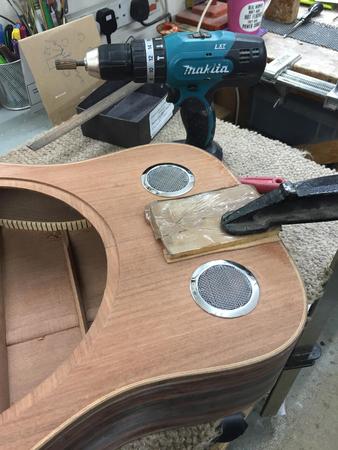 Nice to see you back on here again :thumbup:

Have you checked the intonation/scale length yet? And if so, is this the reason for more neck work?

The few bits in the last post was all the progress since February. Then last week Col gave me a stern talking to. Apart from anything else my crap is taking up space in his workshop.

So I set to on the neck joint again. After a couple of hours of work Col was finally happy. It doesn't look much different but I admit is no longer feels like it's fighting itself. I could now finally make the tapered shim to go between the fingerboard and body, put another couple of screws in and tighten everything up: 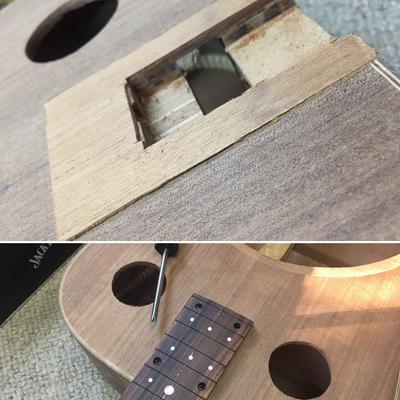 Doesn't look much but that was a major step forward.

Wonks wrote:Have you checked the intonation/scale length yet? And if so, is this the reason for more neck work?

Not yet. Can't really check actual intonation until I get frets and a nut in. But I might need to shift the cone back a little. Stay tuned......

No the neck work was all to do with the joint not being quite right. When screwed in position it looked OK, but as you slid the neck in it felt like it wanted to twist. Basically Col said 'sorry not good enough'. I think it's a feel thing which I don't have. Well it is my first build!

Looks like a lot to me. It's not at the same level, but gluing the neck on my last guitar was definitely the most nerve wracking bit.
And i didn't quite get it right. :(
Fortunately you have Col on hand. :thumbup: