Print view
For fans of synths, pianos or keyboard instruments of any sort.
Post a reply
9 posts • Page 1 of 1

First of all let me start by saying thanks to Dave B, without whom none of this would be possible. I'm sure it was Dave who, way back when, posted how he dreamed of getting a laser harp. As a collector of daft music tech, that was an irresistible challenge.

There are two main commercial offerings; the Prolight controller, and the self-contained Kromalaser. A few months ago I happened upon a Prolight on eBay...but this one needs an ILDA-compatible laser projector to go with it, and I've been keeping an eye out for a suitable bargain since then.

I recently found a Vayron HD500 Blue, and I thought this would be just the ticket. (In other words, it was cheap.) 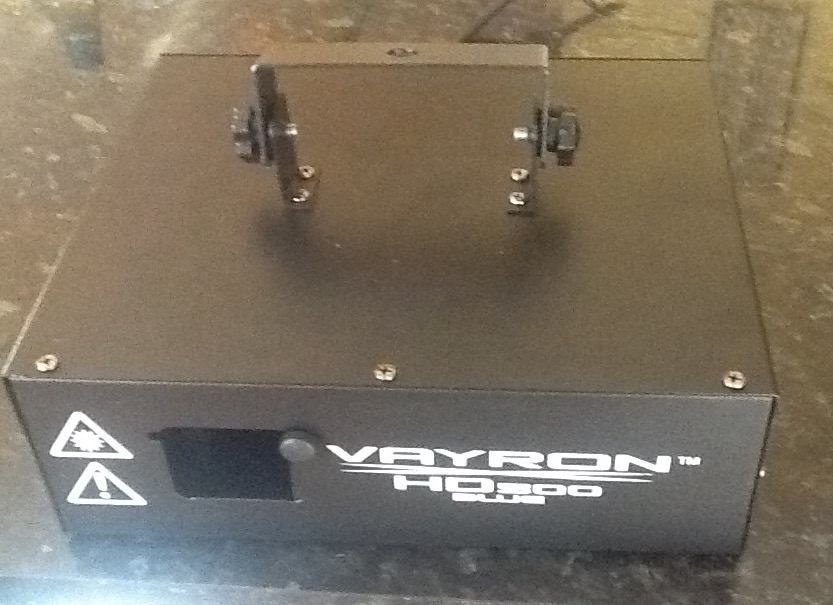 Now I don't know a lot about lasers, but I'm guessing most of y'all know absolutely nothing, so I can hold forth with confidence. And the first thing you need to know is, these things are flipping dangerous. 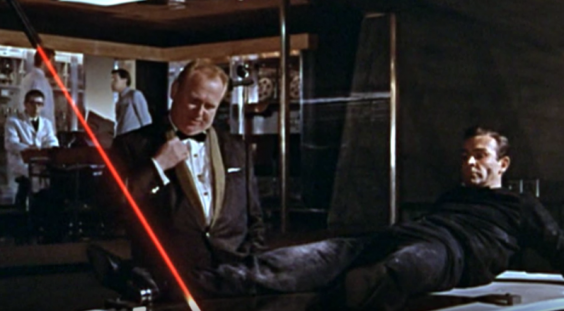 I'm not talking about accidentally cutting someone in half...that's unlikely. But permanent eye damage is more plausible, and I'd been reading horror stories like the Russian ravers who got lasered back in 2008.

The Prolight can drive RGB lasers, but single-colour ones are cheaper. Green lasers are more visible, so non-green single-colour lasers are even less in demand. This one is blue. But, I like blue. :)

I just turned it on. I was a bit nervous, but I cleared the room of cats and reflective surfaces, set it to demo mode, turned the safety key and hit the switch. Fricking awesome. 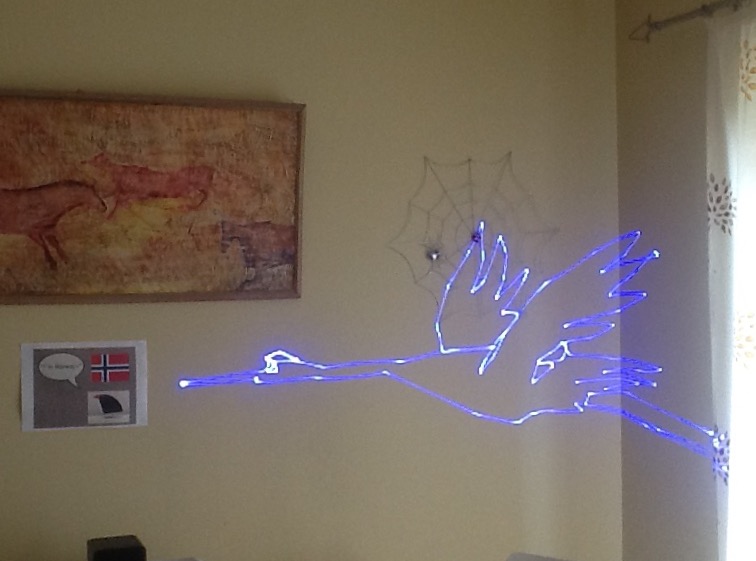 The next step is to plug it into the controller to see if it does anything. There's still a piece of the puzzle missing because laser beams aren't generally visible in thin air (and this is a relatively low-powered one), needing some fog/hazer action, so I'll have to get something to churn out a bit of choking fug before I can get started properly.

I'll also need to make sure I have a pair of laser safety goggles for myself...and public liability insurance for everyone else... :beamup:

That is extremely cool!
You're unlikely to accidentally bisect passers-by with a stray beam (most lasers are alas, or possibly thankfully, somewhat less powerful than films would have you believe...), but yes definitely invest in decent quality safety glasses. IIRC they're spec'd in bands so you need to make sure you pick the right ones for the wavelength of your particular laser, and I'd personally go for the highest optical density (lowest light transmission in the targeted "danger" range) rating you can cope with that doesn't impede your general vision to the point of tripping over things. It might be a "small" laser, but the narrow coherent beam means that the energy density they put out really can mess up eyes very easily.
Check the wavelength specs for your model and pick appropriately ;)

Disclaimer: Not a health and safety consultant, just an idiot on the internet with an opinion :tongue:

Yes, it was me what was banging on about getting a LH. It's still on my 'one day I will own a ...' list. More interesting is that there are now schematics for building one using an Arduino and a low cost led laser - less impressive in front of the pyramids, but probably ok for home / small venue use. And I'm hoping less of a safety issue...

Veni, Vidi, Aesculi (I came, I saw, I conkered)
Top

Can we mod the harp to possess the same qualities as a droid light saber?

Hmm...well, I hooked it all up last night and it's doing something... 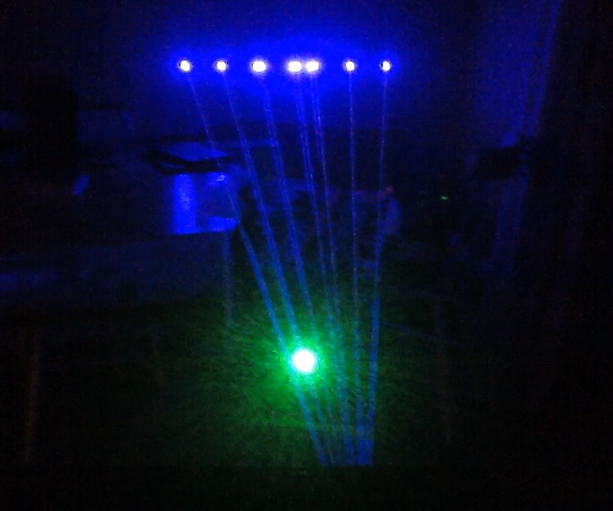 You're supposed to point it at an angled mirror (ideally a front surface one) for vertical beams, but it's currently just pointing at the wall. (I'm still paranoid about damaging my eyesight so I tried to avoid looking at the reflected dots, though apparently diffuse reflections should be safe with "Class 3B" projectors like this one, rated up to 500mw.)

I came across an aerosol haze product called "Magican", so I sprayed some of that around the place to reveal the beams. (Didn't work too well, and made the floor slippery, so a fog machine is still on the wishlist.) 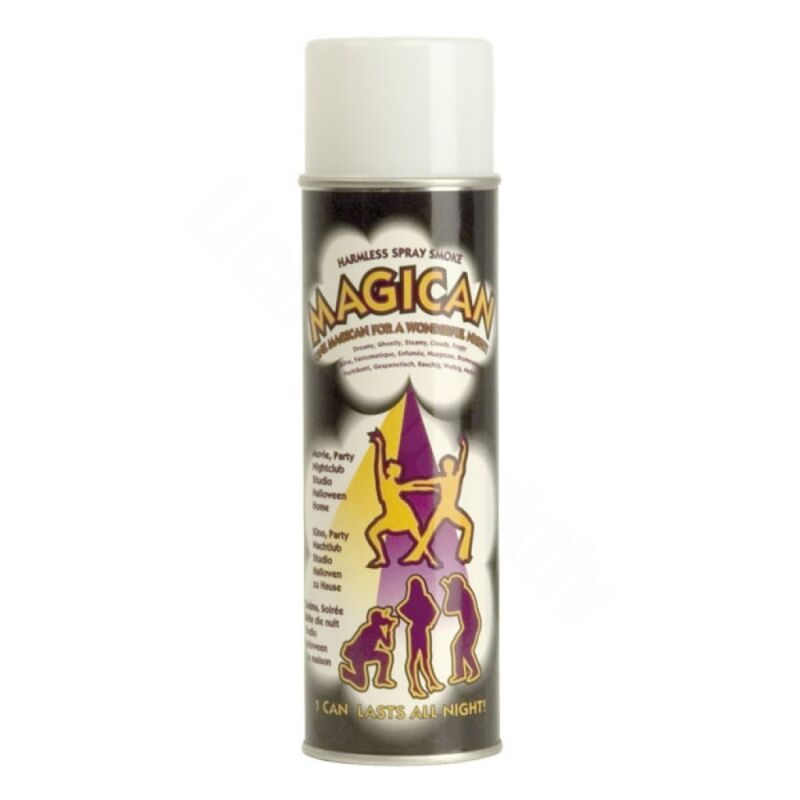 I was able to "open the harp" OK (press a white button to turn on and fan out the beams), and after spraying copious amounts of Magican around the kitchen I got it triggering some MIDI notes when I waved my hand it front of it. :)

Not ideal though; there seem to be some beams missing or bunched together, so I've emailed them about that to see where the fault might be...(incompatibility I expect; I'd have thought that controller/cable/projector would either work fine, or not work at all, if any of them had a fault, but I'll see what they say.)

We sit on the floor in a square shape surrounded by our instruments. In the centre we have a small frame built of pipe that other instruments hang from. The laser people aimed the lasers at the instruments and then proceeded to hot glue 2 inch square mirrors to the frame redirecting the beams vertically and elsewhere. Some of the lasers were aimed at the bowls of water we had around us.
For the life of me I can’t remember how successful the look was but I have a general impression of it being a very cool show. Their lasers were computer controlled. I suspect there was a fog machine involved. Nobody ended up with eye damage which could have been sheer luck back in those crazy days.

Fog machine smoke doesn’t smell bad anymore and probably isn’t horrible for the lungs but you could also consider incense. Peace out 8-)
(Avoid the patchouli flavour if you like your neighbours!)

:thumbup: Hi I have a similar configuration since 2018, but as controller I bought a laser harp controller KL 3d-EVo from Kromalaser (www.kromalaser.com) which is more confortable to use , in my opinion, since it has a color LCD panel and USB midi out. (Also I did not like the price of the expensive Prollgth and its invisible switches for programming). Combined with a chinese rgb laser worked perfectly. I suggest to put some black matte adesive tape on the ceiling. It protects the ceiling and avoids it reflecting the light of the laser all around in the room! Best wishes everybody.

Hi LaserHarpGuy, and welcome to the SOS Forums! 8-)