Only a tonne and a half? What were you doing with the rest of your time?
;)

Gasping for breath and melting icecubes on my face, mainly ;)

A suggestion.
Unless you are using those despicable (should be illegal) push-in plastic back boxes...
When placing the boards, mark the approximate centre of the the back boxes. Once the boards are secure, use a pad saw from that centre mark (which won't be quite correct of course) to saw up and down till you feel it hit the edges of the box - being careful to avoid bunched up wires.

You now know the exact height so this time saw sideways slightly above or below the actual centre so you don't hit the mounting tags. Now you have the full dimensions, you can score with a stanley knife, and just push in the waste bit and trim off, knowing you have a perfect fit :)

Thanks Will - that makes total sense :thumbup:

I didn't go too mad over the seasonal and new year break as I needed to decompress a bit from a rather tough year but I've continued to progress things and over the last few days especially.

Firstly, the thickness of the rafters of the skeiling was expanded by an additional 45mm through the application of 2-by-2 battening (which I attached with 100mm screws to make jolly sure it would take the weight of the acoustic plasterboard later). This allowed for installation of the 100mm RW3 while maintaining the requisite 50mm airgap between the rockwool and the roof as per building regs.

I'm only thicking the rafters down to the stud wall that separates the acoustic area from the storage under the eaves. In that storage area I'm installing 50mm Celotex so no modification to the rafters is required.

I also beefed up the framing over the stairs, did a bunch of non-acoustic plasterboarding downstairs and installed a doorframe (and door) in the bedroom below from which we stole space for the stairs themselves. 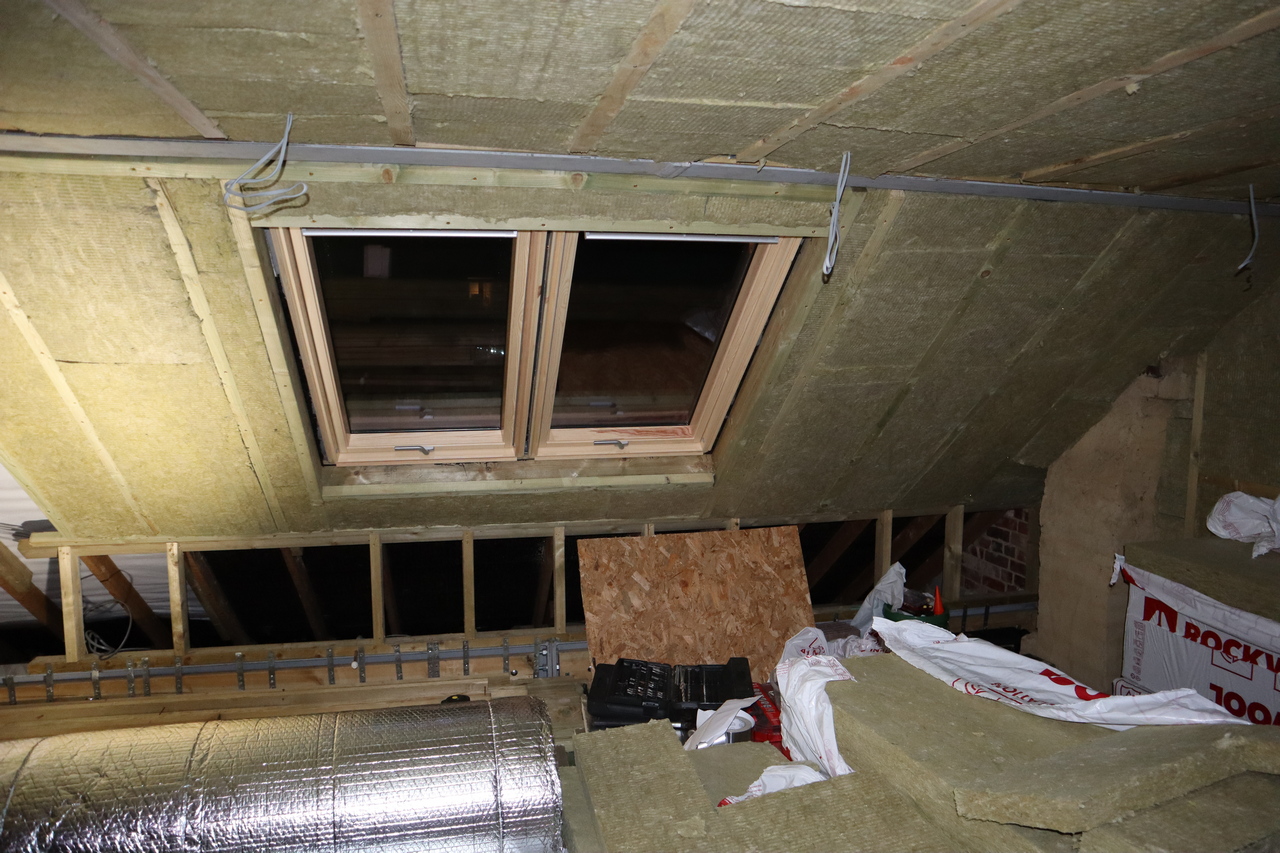 I've also been cleaning up the stairwell cut-through from the 1st floor in preperation for plasterboarding (standard, not acoustic) the stairwell. You can see my partial progress on the plasterboard of the wall behind me. The other side of that wall is completed. 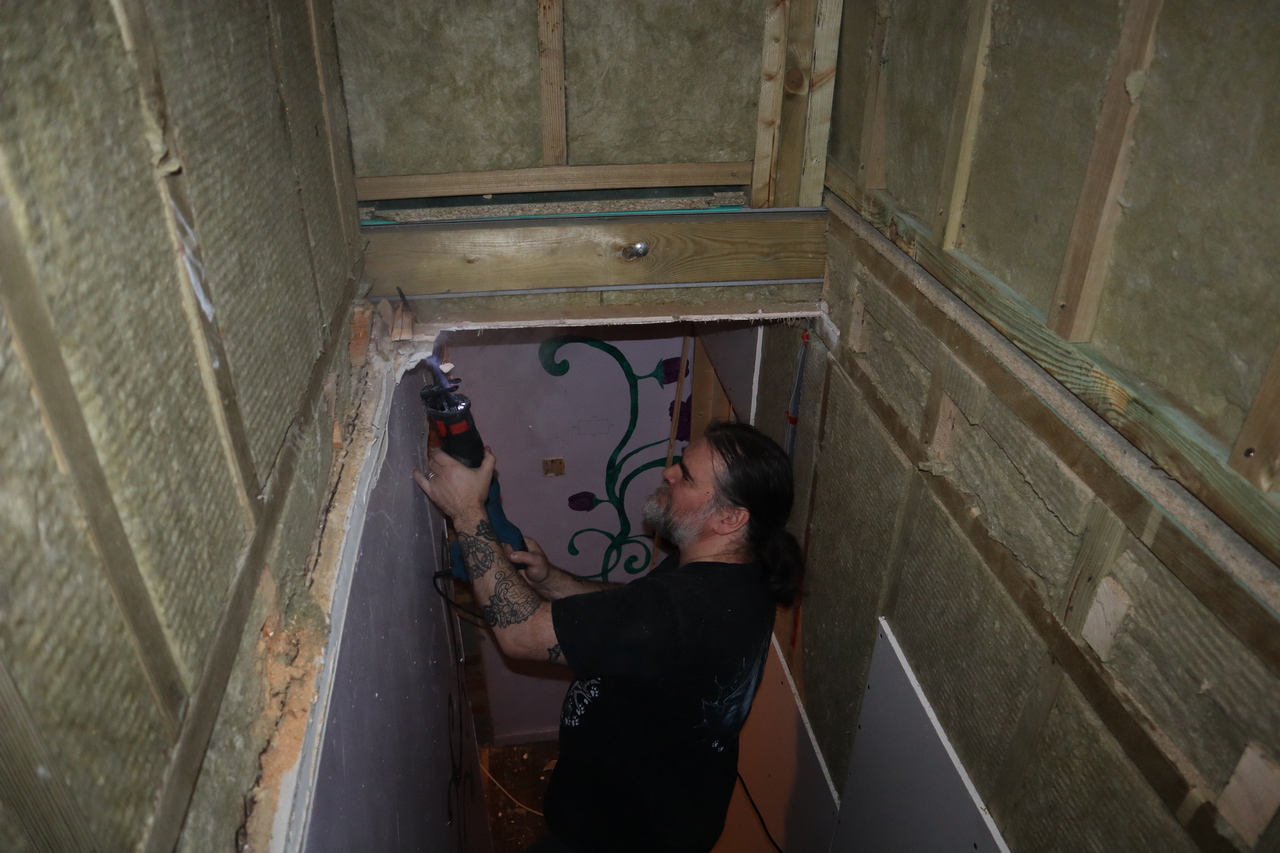 The installation of the alumaflex (14 layers of foil, foam, and the sort of stuffing you get in teddy bears) is progressing also: 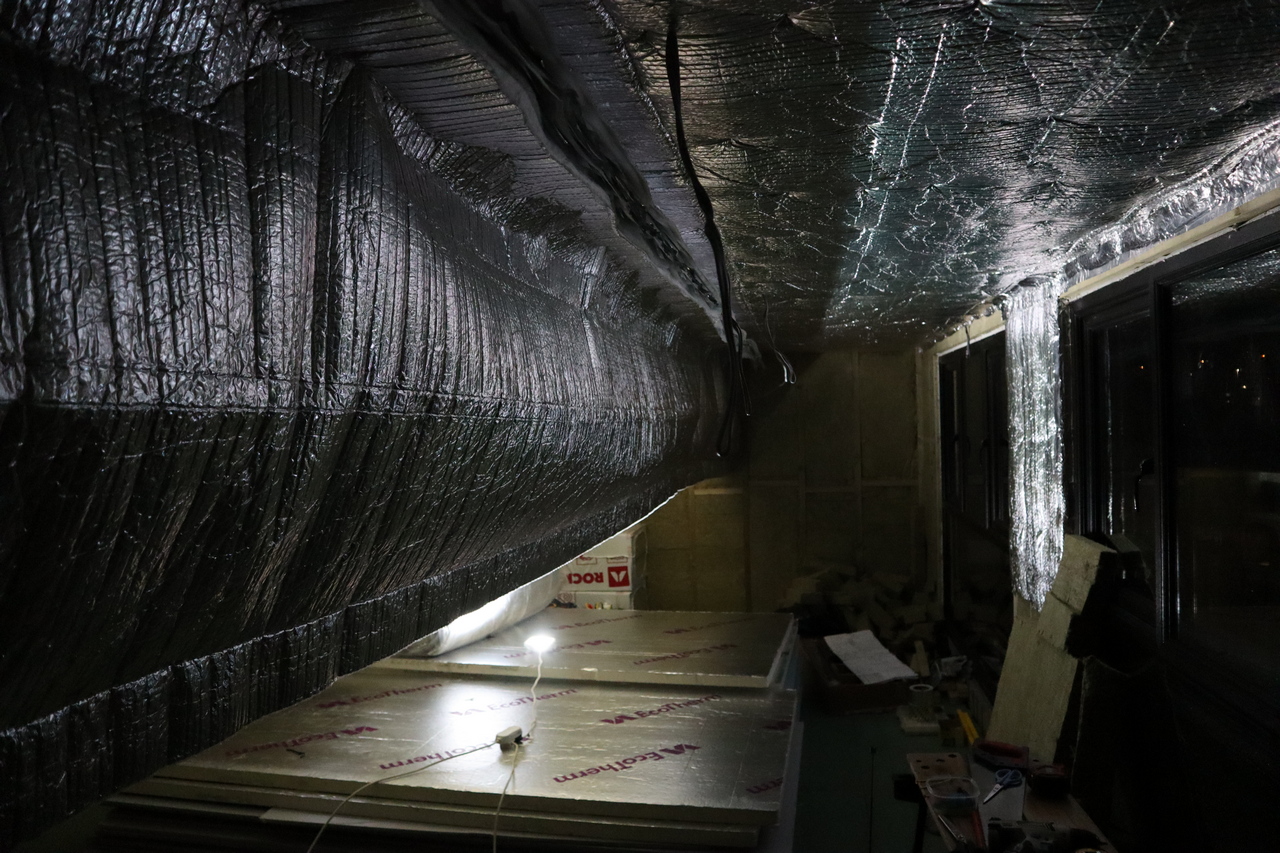 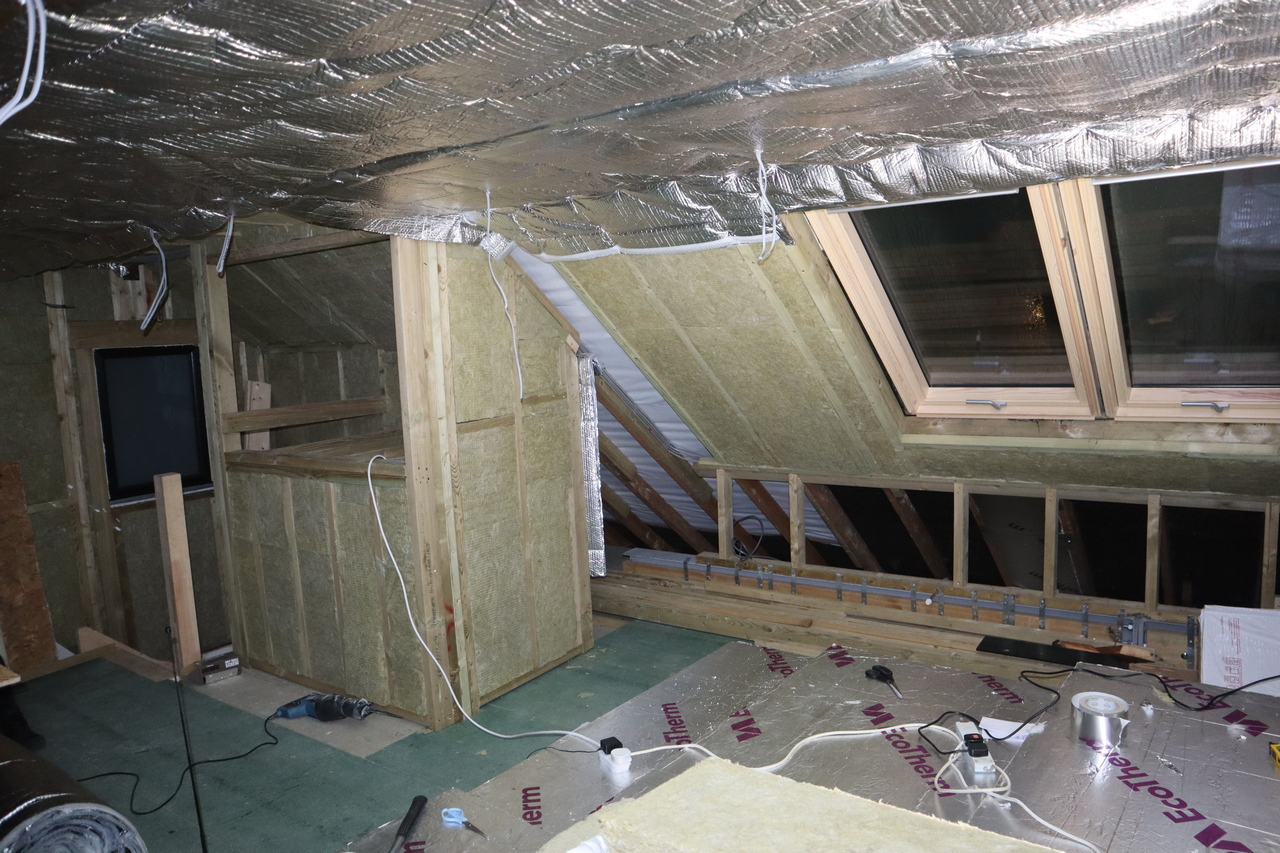 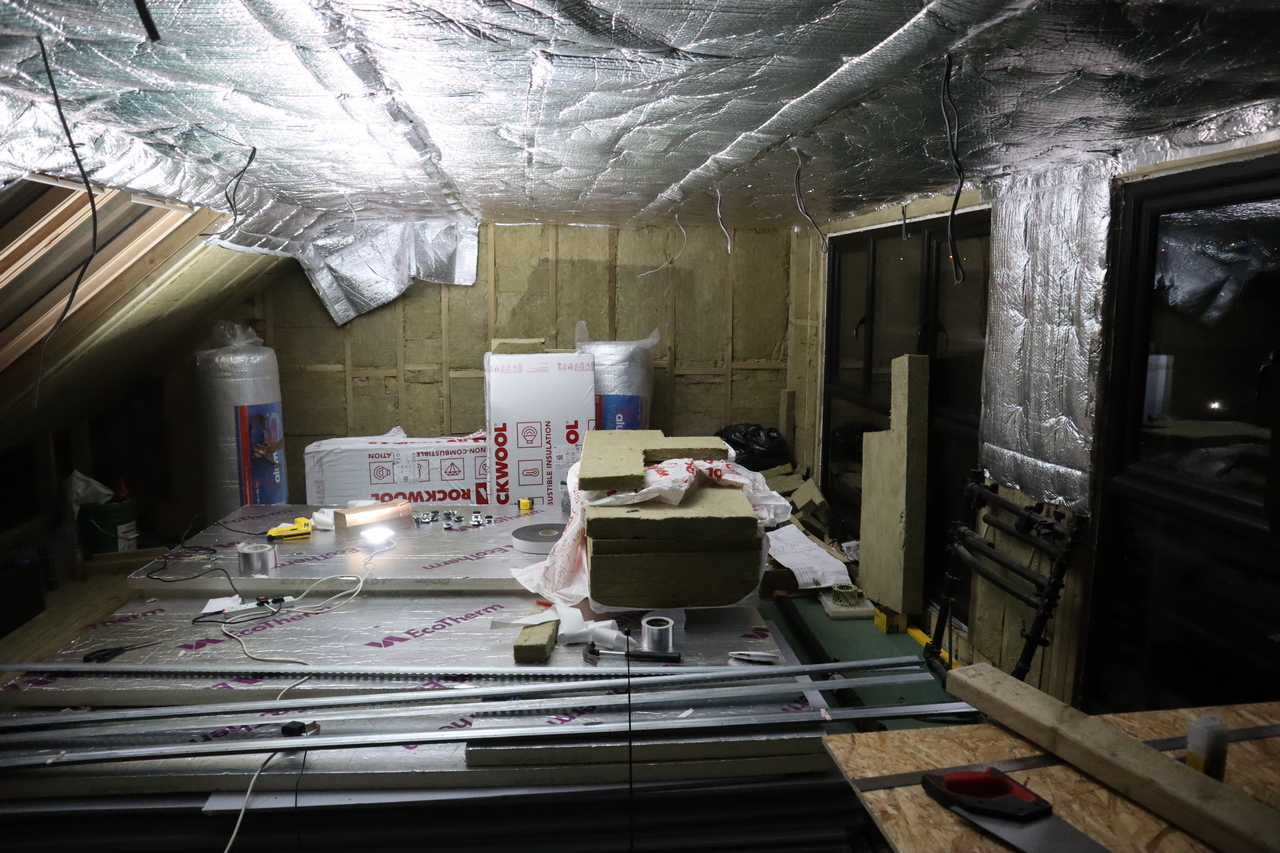 Finally, after the inevitable delay over the holidays further materials have arrived in the form of the resilient bars (180m of them!) and genie clips ... 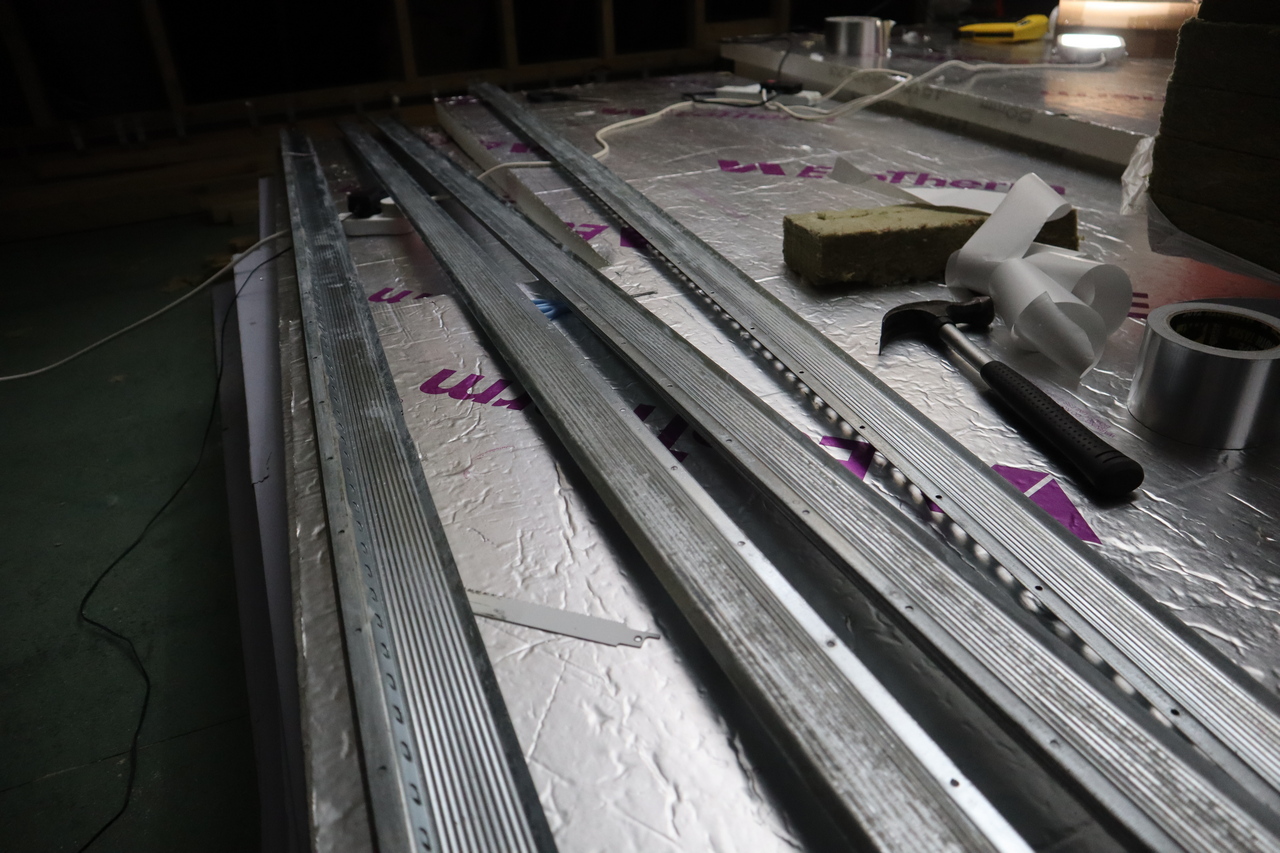 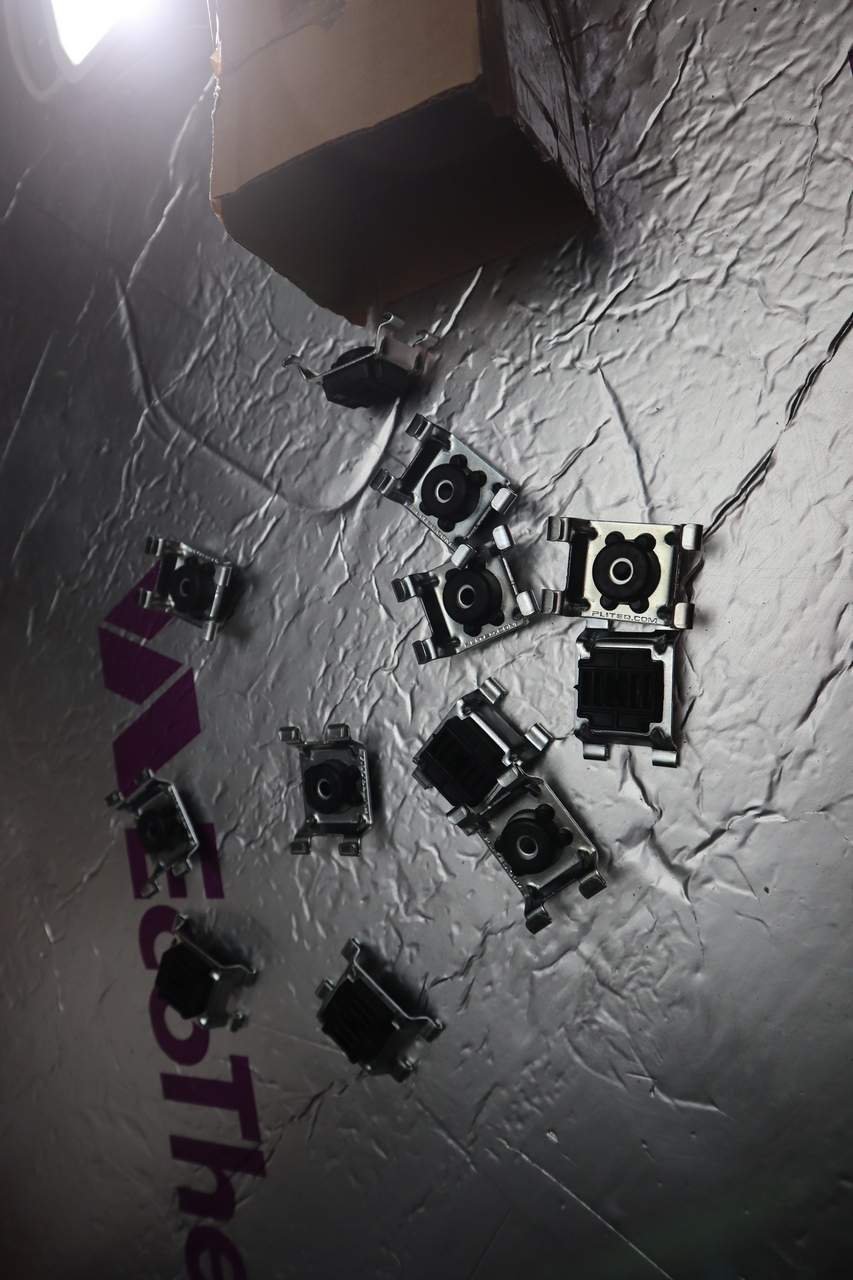 ... and I've also got a suitable board hoist in readiness for the acoustic plasterboard.

I've been back in touch with the electrician who is going to run the cables for the sockets through the secondary stud wall on the party end, and the short wall under the skeiling before I get to the plasterboarding. He's also completely aware (and equally importantly, on board) with the requirement that the sockets will need to move with the wall and for there to be absolutely no rigid connection to the studs.

There is 400Kg of laminate flooring stashed in the living room which I picked up in the January sales at a certain large DIY chain but that's for future reference.

Great work Eddy, that's a good amount of progress for not going too mad! Looking really good, it must be reassuring to have an understanding electrician on board as well.

Looking very good.
What have you done regarding ventilation?

I am in awe of your expertise and dedication Eddy! :shocked:

Thanks for the encouragement chaps - I've been doing a lot of research and the whole exercise is a learning experience that's for sure!

With regards to ventilation, I've not specifically addressed it in any meaningful way and I probably won't. There are ventilation strips across the top of the velux windows, which I'll almost certainly be leaving open permanently though.

It's a large room and I prefer a cool temperature so would normally expect to have a window open a bit anyway unless there is unwanted noise outside or on the rare occasion I want to crank things up a bit, so with 6 opening surfaces plus the aforementioned ventilation strips I'm not too fussed.

Another interum update. One thing I wanted to tackle was the awkward chimney stack and in the end I decided to box it in completely. I made a frame of 2-by-2 and 2-by-4 which is suspended from the skeiling rafters and sits lightly on some foam tape, to minimise vibration and noise transmission from the floating floor: 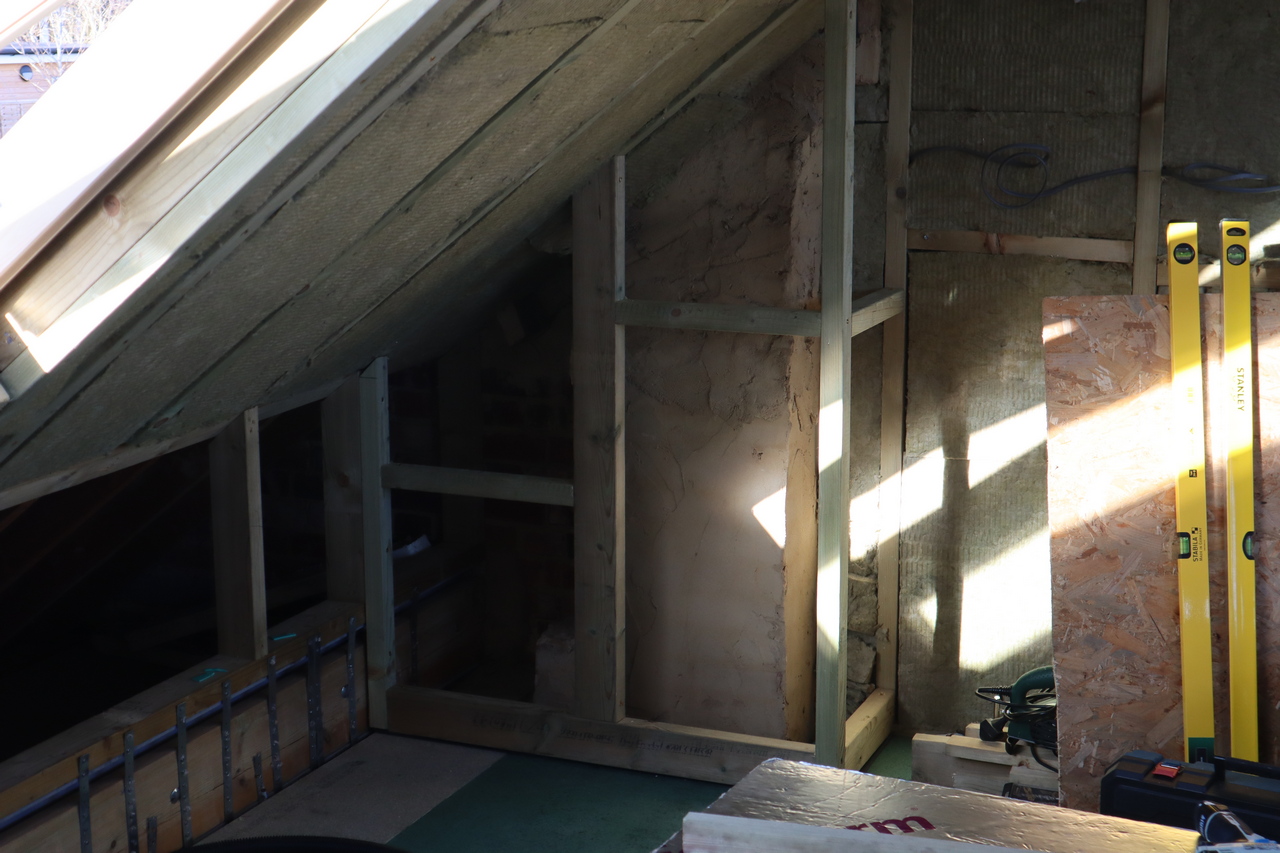 This frame was then packed solid with RW3 and boxed in with 12.5mm OSB: 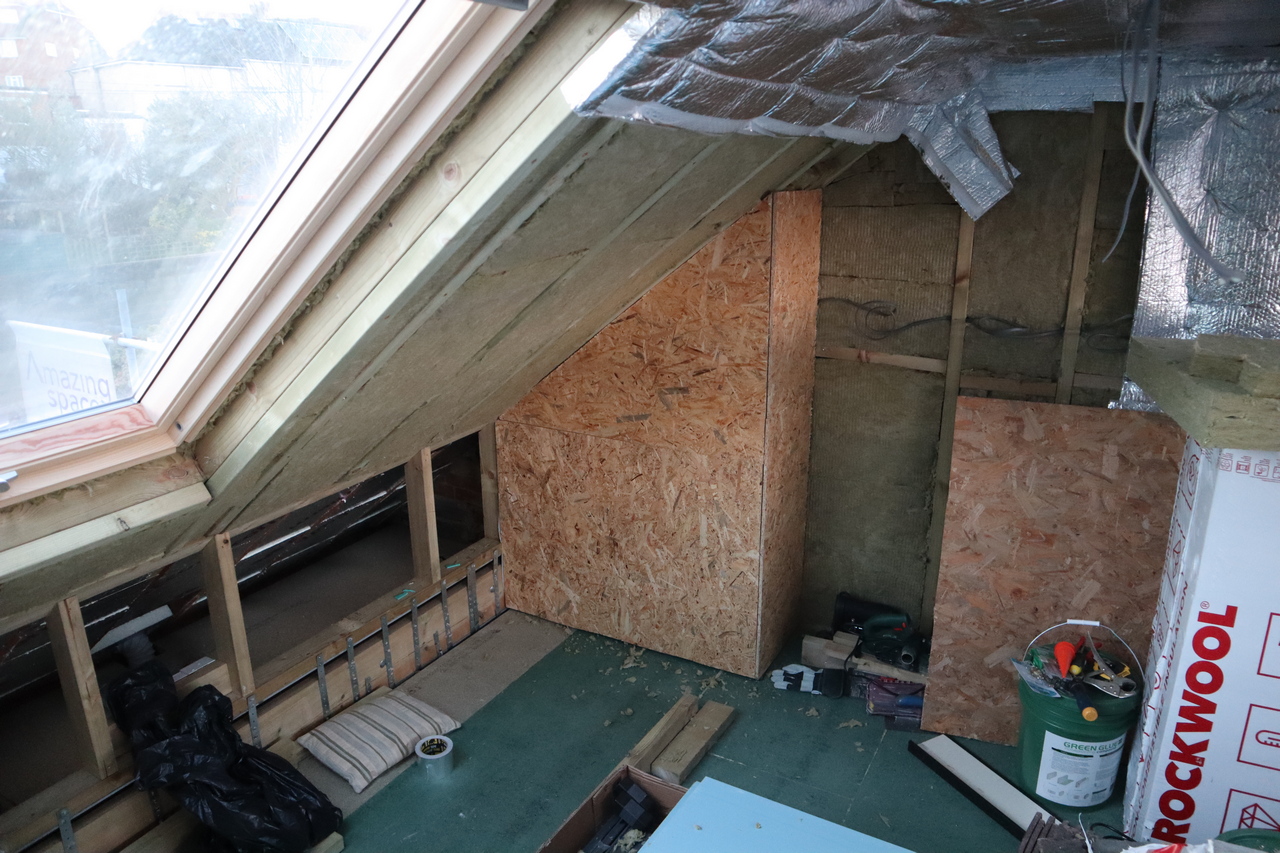 I'll be adding bass traps once the room construction is finished, but at least for now that corner is one area I have nothing to worry about when it comes to soundproofing!

I opted to go with the cellotex as insulation in the non-acoustic area under the eaves, as that area is primarily for storage and the cellotex means I don't have to lose space to extra battening. It will be on the other side of a 100mm RW3 insulated wall with acoustic plasterboard on it anyway.

It's not fun to install, as it's non-flexible so has to be cut to exactly the right dimensions to fit between the rafters. I'd been putting this off for ages, partly because I'm simply too big to physically fit in the eave space without serious discomfort.

Mrs. D. is much more sensibly sized however, stepped up to the mark and did the whole lot herself. The image below is only a portion of the installation; the larger storage area alongside the stairs is also lined with it. 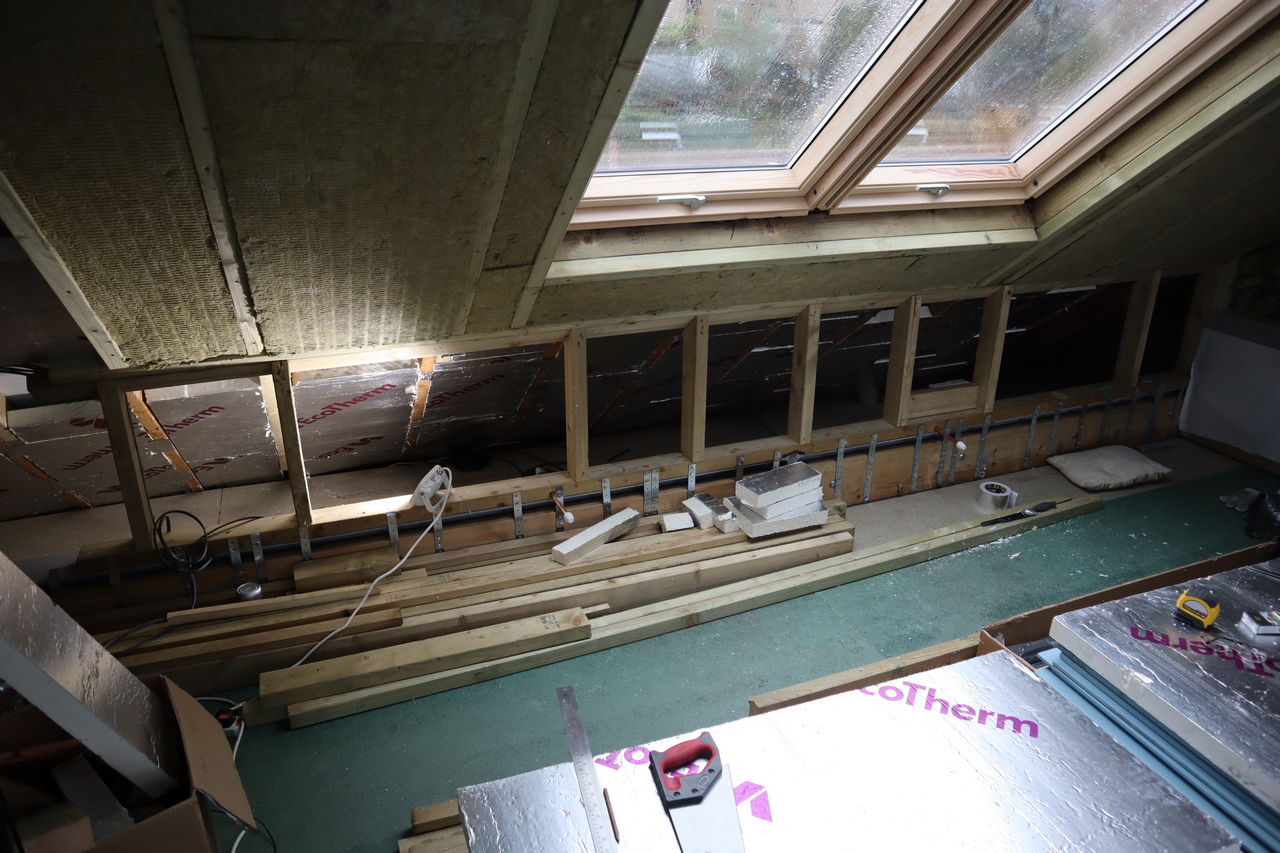 I hate multifoil insulation as a material. It's hard to cut, annoying to work with and provides a mushy surface through which it's hard to locate anything, but it has made the room significantly warmer and acts as a vapour barrier, reducing dust from the rockwool. It's also a building regulations requirement so I have no choice but to use it.

The whole space is pretty much covered in it where necessary now: 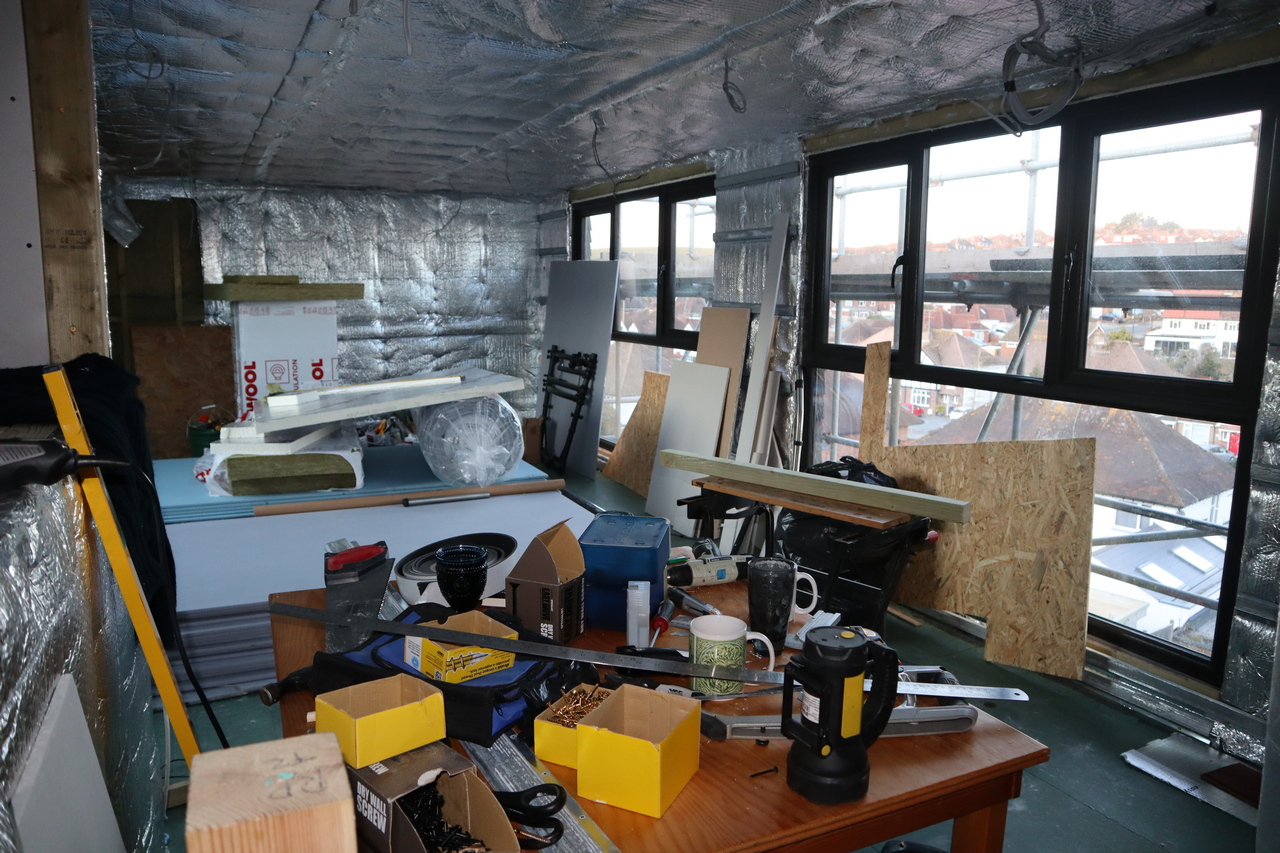 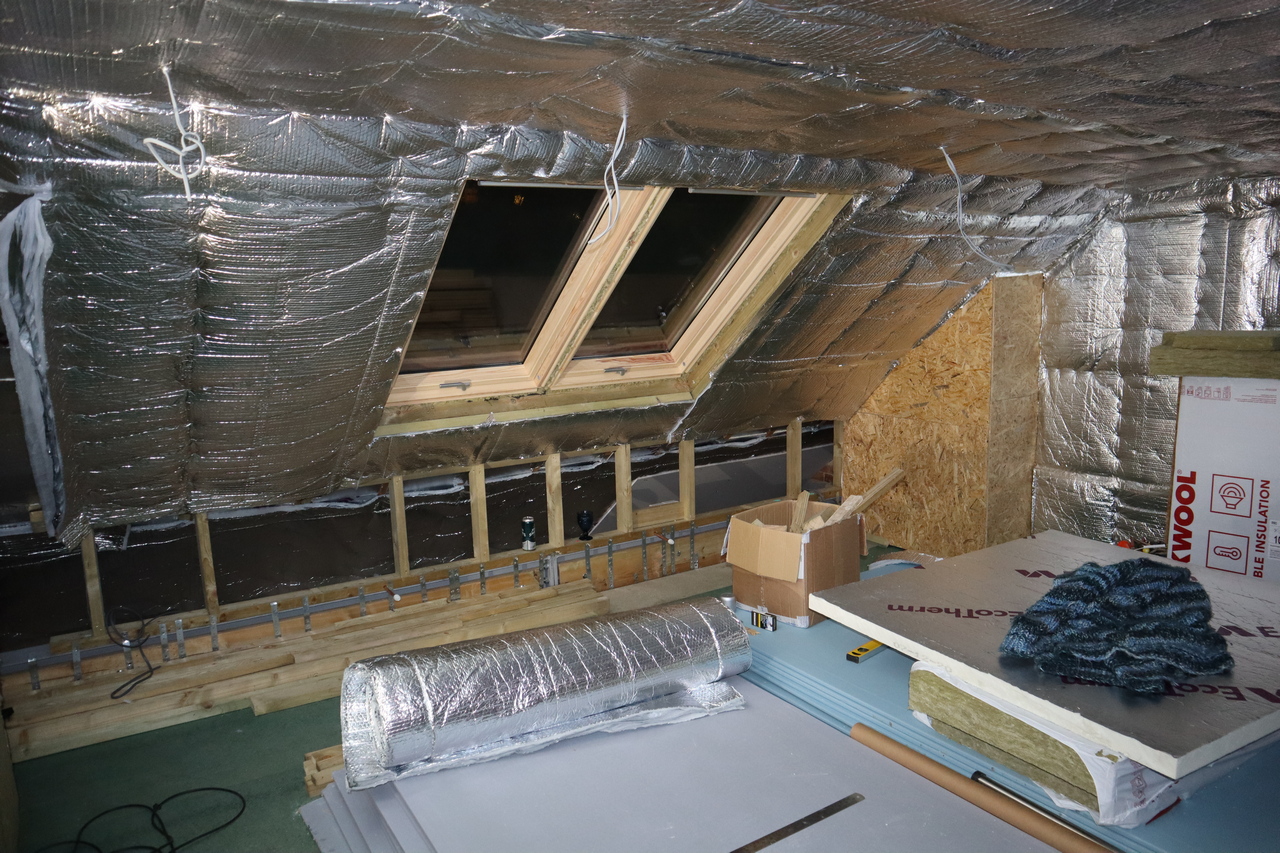 I've also got some of the resilient bars up ... 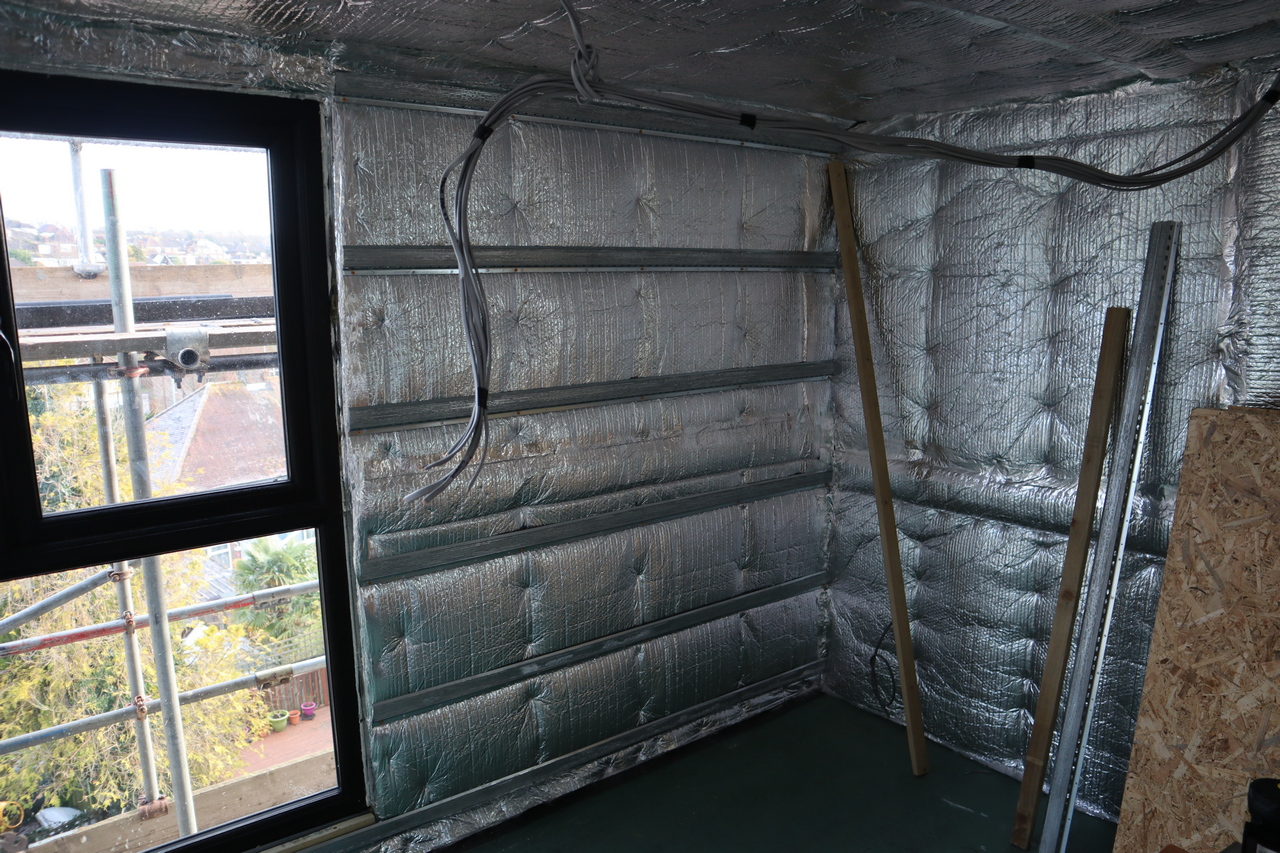 ... and the first piece of 15mm acoustic plasterboard mounted on them: 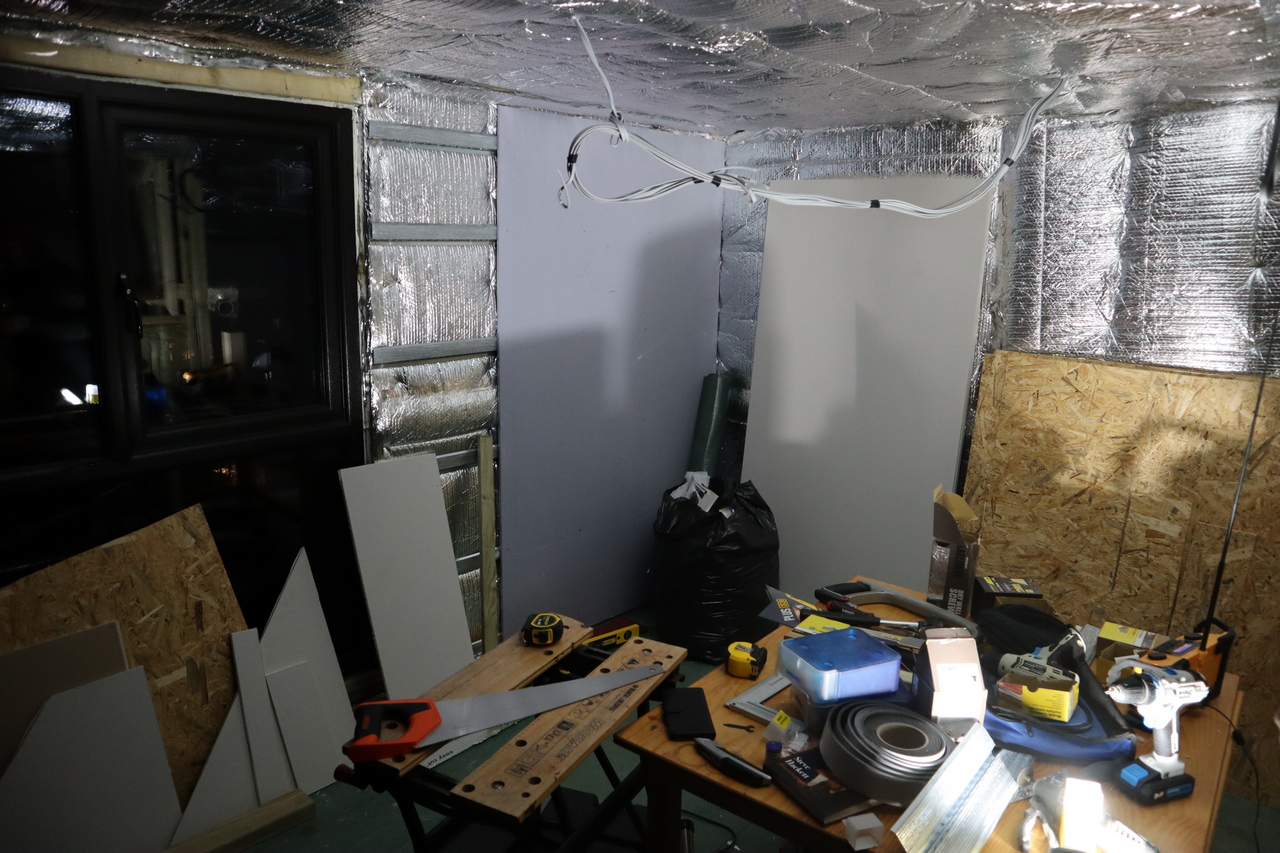 The challenge with resilient bars is that they have a fairly tough, if thin, steel surface area to accept the screws holding the plasterboard. As they are so bouncy, it's nigh impossible to get the screw tip to pierce the metal behind the plasterboard.

My solution was to drill small pilot holes through the plasterboard and the resilient bar. This allows the tip of the screws to engage with the metal behind the plasterboard relatively easily and I'll be doing this for all acoustic plasterboarding going forwards.

Finally, I've all but finished plasterboarding (with conventional board) the stairwell and doing the fiddly bits of woodwork associated with boxing in the area above the stairs: 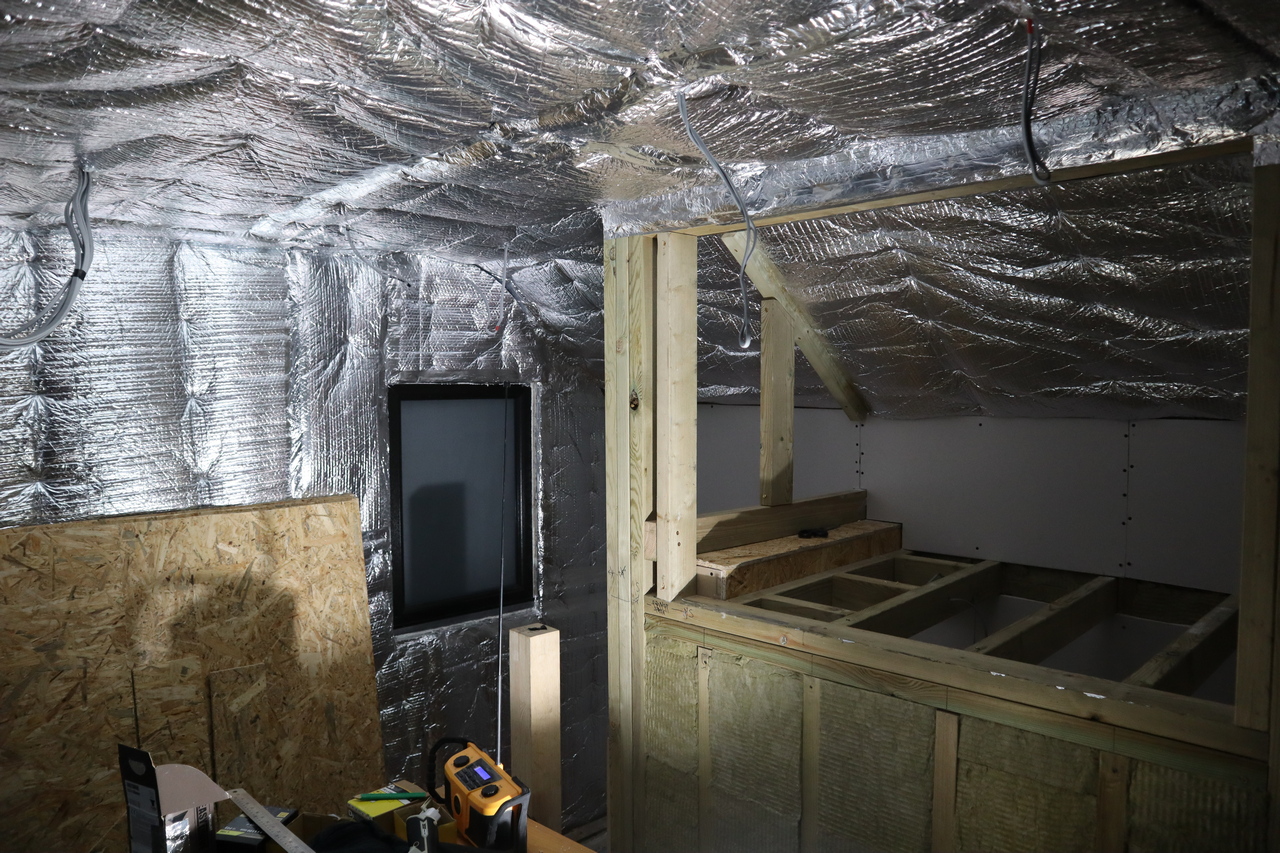 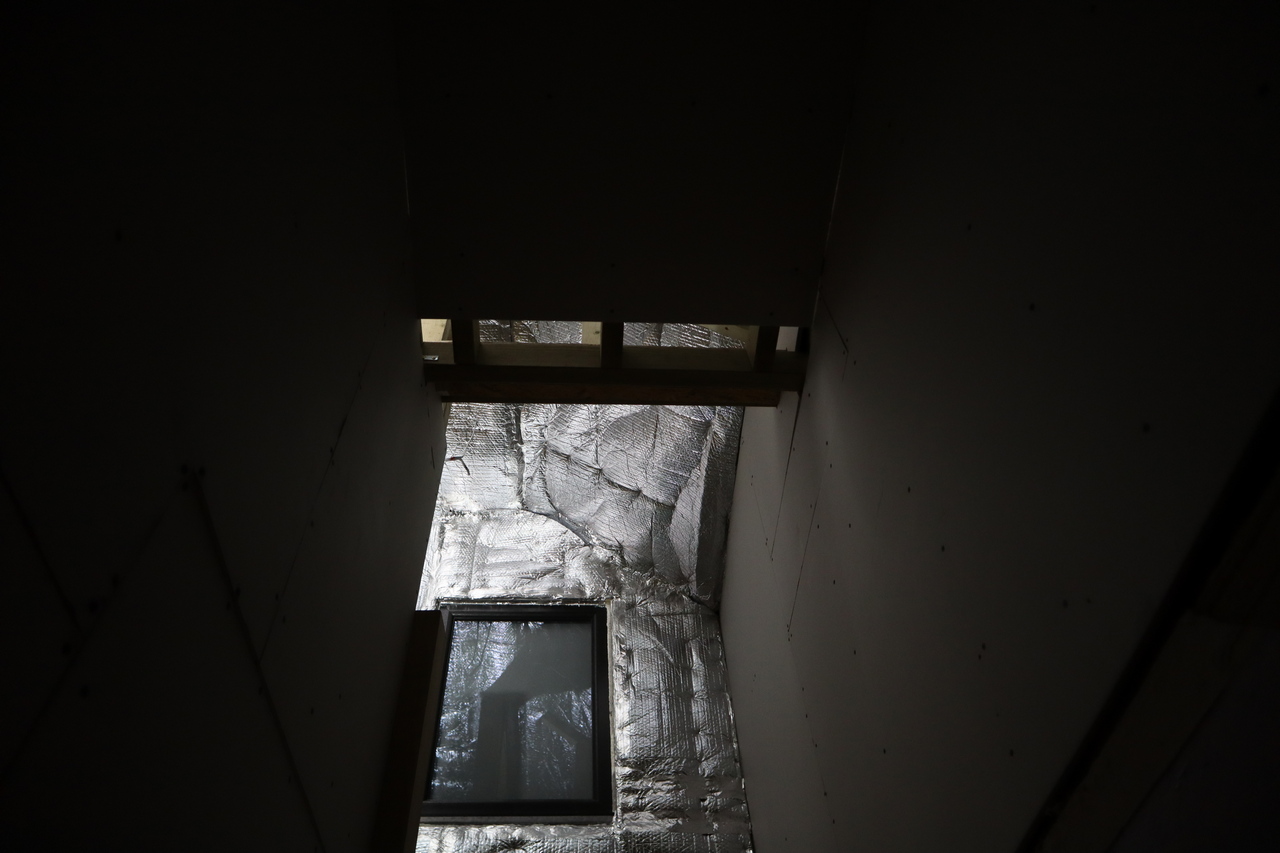 There's still the framing of the doorway at the top of the stairs to do but things are generally moving in the right direction. There's a lot to do but a lot's getting done and I can see light at the end of the tunnel insofar as getting the room construction finished :)

I spy a Psychedelic Tardis.

Nice work.
However...
I would have done the boarding on the ceiling before the walls. That way the top of the wall sections give a bit of extra support to the edges of the ceiling ones, and it's easier to hide any gaps.

Folderol wrote:Nice work.
However...
I would have done the boarding on the ceiling before the walls. That way the top of the wall sections give a bit of extra support to the edges of the ceiling ones, and it's easier to hide any gaps.

Ideally, I would have liked to do the ceiling first but in this case it's rather impractical as I've not yet framed the doorway at the top of the stairs and the little strips of wall above the large windows need to be done before the ceiling can go up as otherwise I won't have enough vertical space there to work with.

To put the ceiling up I need to use the board hoist and currently there is simply too much stacked plasterboard to work around, so by doing the walls first I can reduce that significantly, to the point where the ceiling boards remaning on the stacks can be relocated as necessary!

Another consideration is that as the plasterboard is on resilient bars, there will be no rigid connection between walls and the ceiling. The join between them will be caulked with the Green Glue acoustic sealant.

Finally, the join won't be visible anyway as there will be an LED lighting strip right up there at the top of the wall which will run around the periphery of the whole room.

It's a compromise, but one that I've given some thought to!

Ah yes! I forgot about the acoustic separation.
Carry on... Nothing to see here :lol:

Some good progress again, looking really nice. You've done a great job with the foil insulation as well, it really is awful stuff to work with.

Eddy Deegan wrote:Finally, the join won't be visible anyway as there will be an LED lighting strip right up there at the top of the wall which will run around the periphery of the whole room.