ConcertinaChap wrote:I will say that my perspective is coloured by my use of desktop machines. If you're using a laptop then I guess you really don't want to have to carry around an essential external SSD, whatever the size.

Yup, that's my point, I went for the 512GB SSD as a compromise which should be enough for 99% of what I'll use the MacBook for. I also have a Sandisk 1TB external SSD and a 256GB USB A/C pen drive so can easily move things around when necessary but won't need to have one of them permanently sticking out it the computer.

As I said, priorities would be different with a desktop of whatever flavour, having an external drive plugged in all the time is not really a problem.

Really though with a laptop you carry around the power supply, a mouse (unless you like those trackpad things) and a bag to keep it all in, with maybe some sandwiches and a drink.

For years I used to have to travel a huge amount for work and had to lug around one of these big lumps of metal: 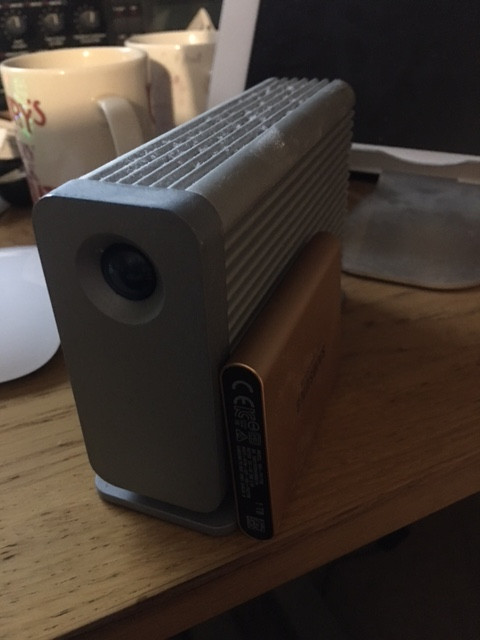 Firewire 800 raid 0 with two disks, 320GB, 1/4 of the speed, thousands of time the weight and four times the cost of that tiny 1TB drive next to it.

I still keep it to look at and realise how lucky we are today.

BobTheDog wrote:Really though with a laptop you carry around the power supply, a mouse (unless you like those trackpad things) and a bag to keep it all in, with maybe some sandwiches and a drink.

Since I became a 'Mac Fanboi ®' I don't need a PSU unless I'm away for more than a weekend*, I love the MBP trackpad so much I've just bought a 'Trackpad 2' for the studio Mac, and I don't drink**

The bag is barely larger than the computer and, actually, more to the point, we refer to these computers as 'laptop computers' and having anything dangling off the USB (or WHY) sockets in the side is a right royal PitA when it is sat on you lap (as mine is right now) and that's not accounting for the vulnerability of the external devices and their associated sockets. Regular usage in those conditions assures future damage...

** One of those statements is a lie, I'll leave you to guess which one

Re: Lap, no dancing.

That was my thought.
I generally only use my laptop when away and I want to be able to use it on my lap etc where having even a small USB SSD is asking for problems.
Even USB sticks are a risk unless they are the very compact ones.

Yup, exactly, I use my MacBook Pro for all my day to day computing needs, recording music takes place in the studio so has a dedicated computer (2008 Mac Pro) and there is another, little used, 2008 Mac Pro in the office but it is pretty well entirely superseded by the MacBook.

Back before I got my first MBP (in 2011) I was using a computer in my car for driving theory test training. My Sony laptop would struggle to complete a lesson on battery power and I had to resort to investor power if I needed to do more than one theory lesson in a day. The MBP was a revelation as it would do a full day without needing charging and manage a weekends web browsing and email writing while on holiday. That machine will still run for two or three (probably more) hours 'off grid' with its 10 year old battery.

Now that the dust has settled ...

The M1 seems like a good chip. It comes out at the top of Geekbench because of the fast memory.

merlyn wrote:The M1 seems like a good chip. It comes out at the top of Geekbench because of the fast memory.

There are some significant architecture wins too.

I was a bit concerned about this at first, but I'm not now. If you want to dig into it, have a nose through YouTube, there are some good videos that dig into this exact issue on the 8GB M1's vs 16GB M1's in respect to wear life, swap space used and so on.

I forget the exact figures, but to even go beyond recommend lifespan (and many drives will last longer than this), you'd have to write every day something like... ah, forget the figures, you can dig into if need be. It's a *lot*. In short, the SSD's will typically last for the useful life of the machine, so it's not something to get too worried about.

Came across this last week on the BBC tech site - apparently some malware going about?
You do wonder sometimes if this plays into the hands of the anti virus companies...
Me? Cynical?

Indeed - not suggesting of that sort - just thought anyone looking at M1 units should be aware of this, but did not want it to sound too dramatic!

Having just bought an M1 MBP that may be of concern to me... Any suggestions where to check, will Malwarebytes find and remove it for example?

There is more detail here on the Red Canary site with a link to their email for questions or comments. Never heard of these guys before and they go beyond my understanding of things for sure.

I would have thought Apple are more than aware of this even if they may not want to shout about it.
It is worth giving Apple Support a call I would think as you will have Apple Care with your machine.

Sam Spoons wrote:Having just bought an M1 MBP that may be of concern to me... Any suggestions where to check, will Malwarebytes find and remove it for example?

Simplest way to see if you have it: https://www.macobserver.com/news/how-fi ... r-sparrow/

p.s. It isn't just M1 machines that this can infect, Intel as well.

Yep, the instructions to check whether you are infected are usually posted alongside the info on these things.

I checked mine some days back and there was no problem. The number of infections was pretty low, so the likelihood you're infected is also pretty low, but worth checking in case...

Checked, I have none of those files so presumably I'm ok for now.