GPU Die -- Analog and GPU Vcore can't both be right. One of them is spurious. If the voltage is 0 the GPU isn't doing anything.

The happier place to be is to believe GPU Vcore and ignore the temperature.

It ain't what you don't know. It's what you know that ain't so.
Top

merlyn wrote:GPU Die -- Analog and GPU Vcore can't both be right. One of them is spurious. If the voltage is 0 the GPU isn't doing anything.

Yep, the GPU is intentionally disabled, hence the 0V.

merlyn wrote:The happier place to be is to believe GPU Vcore and ignore the temperature.

True, but the sensor *is* reading - for instance, this morning the temp was running around 80 degs on casual use, and I ran Logic (at the beginning of the graph below) to test some plugins and as the CPU was working, the CPU was generating heat (from about 55 to about 85 degrees, which is pretty normal) and the GPU temp sensor again climbed and flatlined at 128, until I cranked up the fans and finished what I was doing, and after that the temps lowered again. So it's not like it's not reading temperature changes as such. 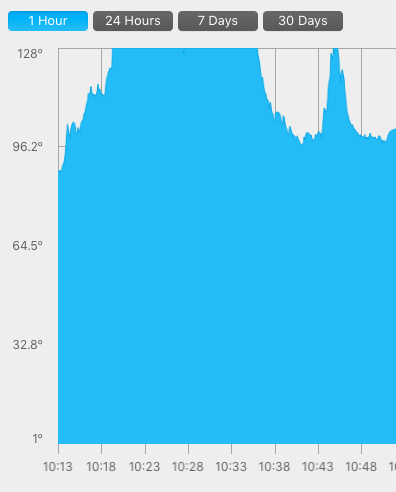 Without knowing how these sensors work and where they are placed - presumably they can't be on the GPU die because without power they wouldn't work at all - it's difficult to know what's going on and how to read whether it's a real problem or not, which is a bit frustrating...

They could indeed be on the die, and very likely are. The simplest, and fairly linear type is a reverse biased diode, typically -2mV/degC (depending on current).
On the die, this can be placed right at the hottest part of the chip

They will undoubtedly be NTC thermistors, which are a very cheap solid-state temp sensor. Their resistance goes down as the temperature increases. So a higher indicated temperature means either a lower measured resistance (maybe a partial short circuit), or the reference voltage used to put across them is a bit out of whack. e.g. if the circuit was supposed to have 3.3v across it but instead has 3.1v, then you can get significantly different temperatures reported by the software.

I found this Intel paper on on-chip temperature monitoring, which may provide some more background information for you.

Interesting. That means Intel are way behind the curve. I'm pretty certain the ARM chips use diodes - don't know about AMD.

I would have thought the temp sensor can't be on die if the GPU is powered down, but the sensor is still working?

I guess the better explanation is likely to be as Wonks suggests - some recent-ish changes in resistance/etc from around the faulty GPU area that's throwing the temperature reading off, even though the sensor is responding to temperature changes...

Folderol wrote:They could indeed be on the die, and very likely are.

Actually, looking at how the two GPU sensors are labelled, they are called:

GPU Die - Analog (or "GPU Diode" - this is the problem sensor)
GPU Die - Digital (this is non-functional and gives no reading, presumably because the GPU is disabled)

So maybe the "digital" sensor is the on-die sensor, and the "analog" problem one is a separate thermistor associated to the GPU, and misbehaving as per Wonks' suggestion. 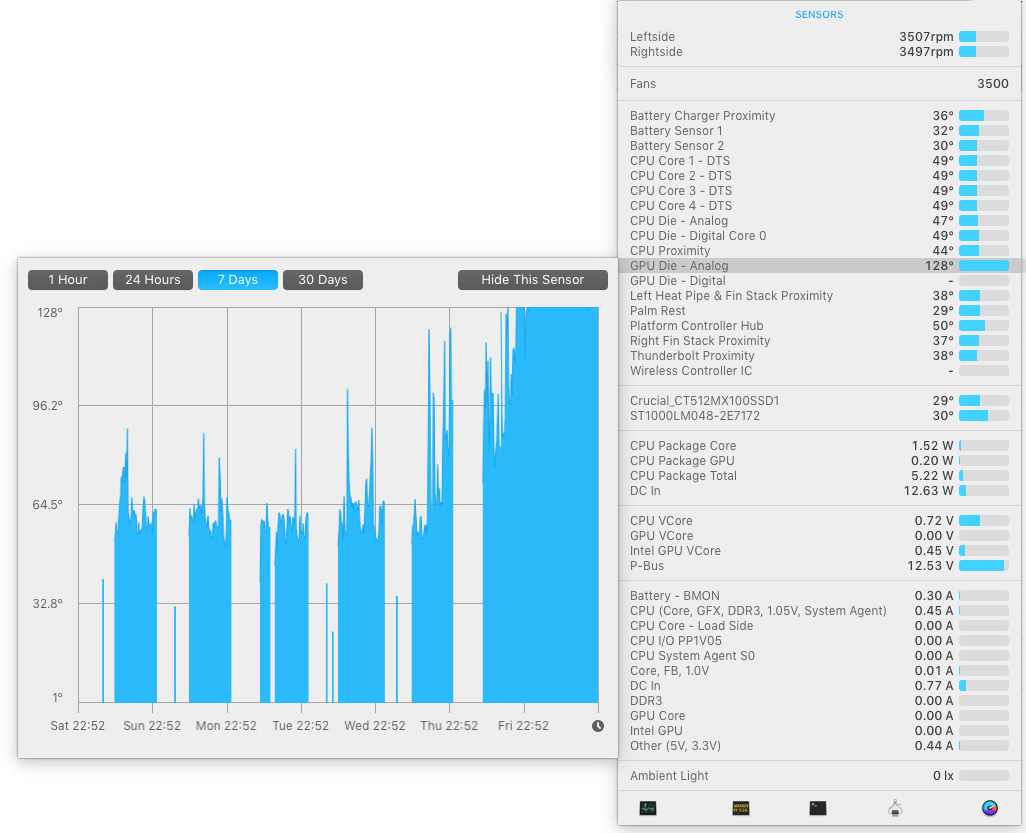 It's probably much higher, it's just the sensor maxes out at 128...

Hurry up and release some new M1 MBP's Apple, before my machine melts through the desk...

Clearly this gpu got all hot n flustered watching Frankie Goes to Hollywood.