In keeping with the re-use theme, I had found a bone nut Col had taken off a guitar that someone had tried to intonate at the nut end. It was thick enough that I could file it down flat to get rid of the intonation profile and fit into the nut slot. However this left it too low so I had to raise the nut. I did this by gluing a bit of beef shin to the bottom, cutting flush then filing square. I'm pretty sure it would have been easier to start with a blank nut but anyway.... 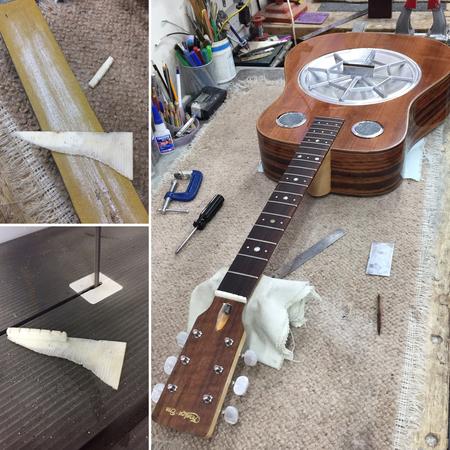 Oops forgot to say I had fitted the machine heads in the mean time, using a G clamp to push the ferrules into the the headstock first.

When I bought the basic resonator hardware (cone, spider, grills, tailpiece) they came with a couple of blank saddles. I was expecting not to use them as it was all very cheap stuff from China. However the saddles look like maple and ebony so decided to go ahead and try one.

First using a long ruler between the end of the fretboard and the top of the spider (where the saddle would go) I measured the height at the 12th fret. Not a very accurate approach but I just wanted to know roughly how much to take off the saddle. I couldn't be 100% accurate anyway as I didn't know how much the cone would compress under string tension.

I didn't make a note of the measurements I'm afraid but it was clear I was going to have to take a lot off the saddle, even though I wasn't going for a super low action (I guessed 3mm on the bass side would be about right to play slide and still play the odd fretted chord comfortably).

I cut the the saddle down to somewhere near, and shaped the top to about the same radius as the fretboard (I had previously re-cambered this to a radius of 16" - any tighter and I found slide tricky to play). Strung it up, tweaked the truss rod and found I had about 5mm at the 12th fret. Intonation was a little sharp at the 12th.

At this point I went back and paid some attention to the nut slots, widening them out a little for the heavier strings (15 to 56) and taking them down to just a little higher than I would normally.

Then I took the saddlle down about another 2mm, and profiled the top so that the string contact point was at the back to help with intonation. I didn't bother to intonate each string as I might for a standard acoustic as it's just a lot less critical if you are not playing fretted up above the 7th fret. I cut some very faint grooves to hold the strings in place and strung it up again. Much better - a smidge over 3mm at the 12th, intonation fine apart from the bass A string noticeably sharp as you get up above the 10th. I can live with that. Played comfortably enough in first position, slides without rattling over the frets and I can play behind the slide to get minor chords and 7ths etc (with a bit more practice). There is no more room to play with in the saddle though, so if I do want to lower the action at any point, well I'm not sure what actually. But happily I won't have the problem some acoustics have of the bridge pulling up as string tension is working the other way in this setup. 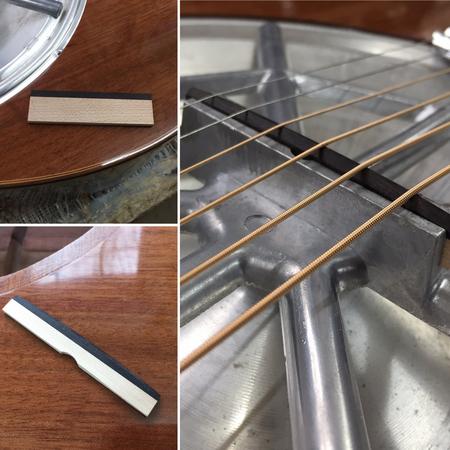 (The rounded slot in the bottom of the saddle is to accommodate the cone adjuster screw.)

So then it was just a case of fitting the rest of the hardware. Grills were glued in with a dab of gel superglue. The cone cover screws on (bit nerve racking drilling newly polish wood..). A strap button out of Col's drawer of stuff he won't throw away (this one really should have been). Quickly cut and sanded a rosewood truss rod cover and then..... 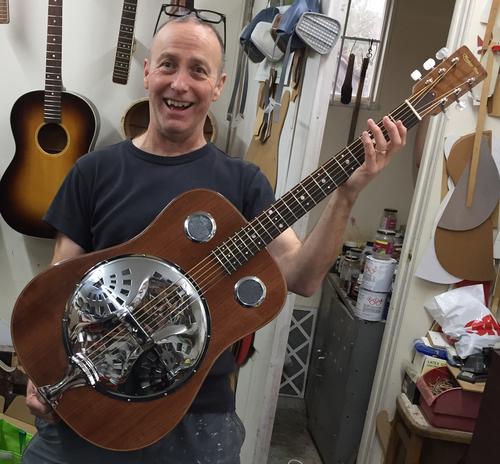 Just a bit confused about who the crazy old guy is who is holding my guitar!

Wishing you many, many hours of pleasure with your excellent new guitar.

Top job, you should be very proud.

Excellent work! Amazing how, after so many weeks of work, it suddenly seems to come together really quickly. :) :thumbup:

Absolutely beautiful finish. Hope it sounds as good as it looks.

BTW is that a scroll saw in the bottom left pic at the top of the page? I've just bought one & I'm amazed at the complex stuff even someone with as little talent as me can turn out with it.

Looks more like a bandsaw to me. I have a scroll saw too, mine's a bit wayward but that could be incompetence or the fact that it's a cheap cr@p saw.... :blush:

Thanks everyone, hope the saga provided some entertainment at least.

Re the saw, it’s a small bandsaw. Not actually sure why that’s different to a scroll saw, maybe just blade size. This one won’t cut really tight curves.

Re at demo, yes I’ll figure something out. I still have a bit of set up to do. It all plays cleanly, no rattles etc but I haven’t really set up the cone. I was going to let it settle down for a week or so first. But I’ll post something at some point. :thumbup:

Mine's just a cheap scroll saw.
https://www.recordpower.co.uk/product/s ... ndkfYj7SUk
The advantage over bandsaws is the huge throat depth & because the blades are ony short they can be very fine & turn on a sixpence. Also lets you make internal cuts by threading the blade though a small hole.

No use for straight cuts though as there's no guide, so it doesn't replace a bandsaw. They're different beasts really.