Print view
All about the tools and techniques involved in capturing sound, in the studio or on location.
Post a reply
22 posts • Page 1 of 2 • 1, 2

It seems every time I power up my Boss RC-505 the System settings are back to default. It's getting tedious having to reset all my custom settings in there. Does anyone know how I save them?

From page 5 of the manual:

If you select a different phrase memory or turn off the power after recording or editing the settings, the recorded content or edited settings will be lost.

Thanks for helping, Hugh. It's always appreciated.

That manual reference relates to saving one of the many 'Phrase Memories' - not the machine-wide 'System' settings. I can't see anything in the manual that relates to saving these parameters, so one might assume it would be automatic. The system settings contain such things as auto power off, line output settings, MIDI channel and the like. After a power-cycle they are resetting to default.

I started wondering if the internal batteries were duff, but it's storing everything else between power cycles - just not the settings that affect the machine as a whole! Odd...

Hmm.. according to https://www.boss.info/us/support/knowledge_base/201975189/ the same procedure should apply to system setting, by selecting the relative slot?

But System settings are global - they don't have a 'slot'.

The link you've given here is to Factory Reset, BTW!

Hehe yes I'm aware, but it was point 4 that got my attention:

Turn the MEMORY/VALUE knob to select the desired range of parameters you want to reset (SYSTEM + MEMORY, SYSTEM, MEMORY).

It sounded a bit like the same language as page 5 in the manual where it talks about how to save (generically).

But it obviously wasn't - my bad.

Haven't got my hands one one unit, there's one at the studio but I'm not scheduled there til next week.. hopefully you'll have found out by then!

Weirdly the thing now seems to be storing System settings between power-ups without any intervention on my part.. Hmmm...

Yeah I was going to write, just tried last night the RC at the studio and it was doing just that - no need of explicit save.

It may be that it uses some CMOS memory like PCs used to do, and thus a battery to keep the settings... maybe it had somehow dislodged in yours? Or if it is a newer model it should have an SD card, and maybe that got out of whack somehow..

I have a vague recollection reading that for the newer models, there should be an SD card, not removable, but internal and attached to the motherboard. But haven't really opened one so could well be mistaken.

Not come across that but I guess it's possible, It would make upgrading the onboard memory a breeze though (on the basis it would be pointless to solder it to the board. I suspect them memory is soldered on SMT chips though.

I'd been told explicitly that there's no SD card option on the RC-505, but hidden somewhere inside? An intriguing thought!

But for me it's fine as it is. I only use it for live improv and it's more than up to that task.

The Elf wrote:I'd been told explicitly that there's no SD card option on the RC-505, but hidden somewhere inside? An intriguing thought!

But for me it's fine as it is. I only use it for live improv and it's more than up to that task.

If you were to open I think it you would see an SD card (which I guess it uses to store everything) - either soldered or hopefully inserted in an interface container as Sam says. Dont think it's particularly serviceable though, I've seen pictures of the motherboard with a glob of glue over it.. but you never know :D

Though I realized that wouldn't explain the behavior you're experiencing, if the problem with the save setting was the card, it wouldn't be able to save much else.. unless the file got corrupted somehow and it has an auto-recovery that kicks in. A mistery :)

Unless somebody has faked the pic it seems like the 505 does use MicroSD memory. I suppose it's a cheap way of being able to upgrade future versions at the manufacturing stage maybe with new firmware and a bigger memory card?

Must take the RC-300 I've just bought to bits and see if it has one, (though I guess I should wait until the warrantee runs out). So if anybody wants a mint, boxed RC-30 a sensible offer by PM would secure it before I stick it on ebay. 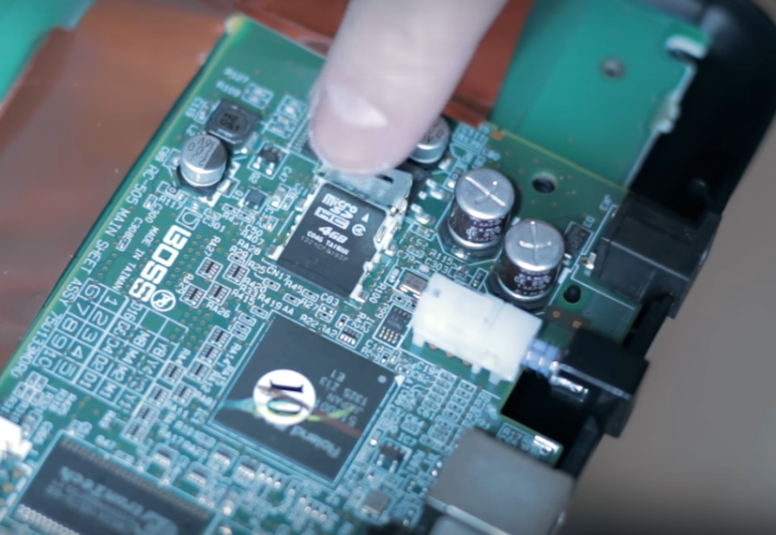 Tanks Wonks :thumbup: 4GB looks about right, 3GB is roughly 3 hours of stereo at 24/48 leaving plenty for firmware and any global stuff that needs storing.

Amusing that it's all down to a little SD card! It's kind of a shame that Roland didn't feel they could let us have an external card slot and choose the storage size for ourselves. It would also be far more convenient for moving data around and keeping backups.

30 minutes of storage is way more than plenty for my needs. It wouldn't surprise me if other aspects of the machine disallow putting a larger capability card in. Has anyone tried that we know of?

Now 3 hours is probably enough TBH, and even my stomp box sized RP-3 has that!

Greetings from Holland, I've been working with the RC505 for 3 years now, but recently i bought a new one. Now i would like to transfer all my files from the old one to the new one. There's no problem with the audiofiles and also the MEMORY and SYSTEM-files are transmitted to my new RC505, but the a problem occurs. As soon as disconnect my new RC from my laptop the new MEMORY-file I just send to the new RC is deleted an the old MEMORY-file re-appears. This means that the different frases don't have there names or any other information like assign1 Switch or volume information. How can I succesfully store my new MEMORY-file onto my new RC505?

I have just bought a RC-300 and had issues when I first tried to save the factory loops and a few I had done. The manual says you must delete the 'Roland' folder from the RC-300 before copying the backup to the onboard memory, I did so and restored the backup, as far as I can tell (having only had it a week) everything is now working as expected.